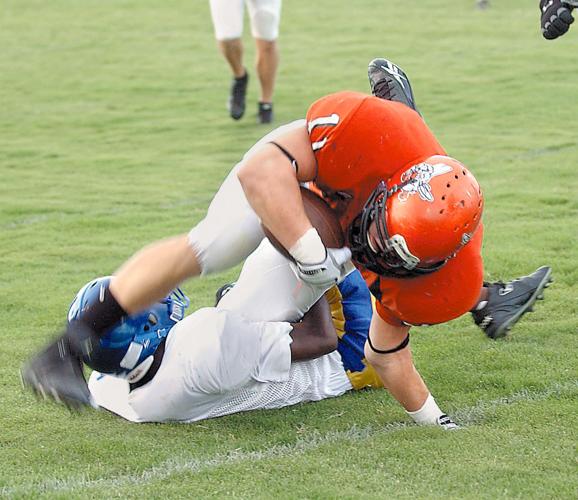 Hilldale player Zach Wallace is injured during a scrimmage Friday night at Hilldale. Wallace dislocated his left elbow on the play. He could miss six weeks. 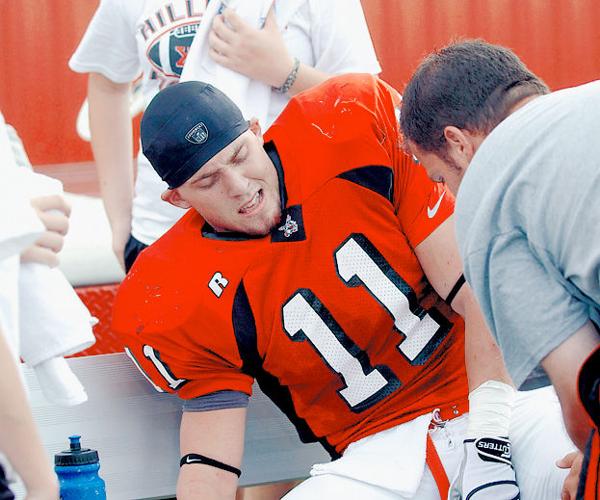 Hilldale trainers tend to Wallace on the sidelines.

Hilldale player Zach Wallace is injured during a scrimmage Friday night at Hilldale. Wallace dislocated his left elbow on the play. He could miss six weeks.

Hilldale trainers tend to Wallace on the sidelines.

The third play of Hilldale’s first series on offense in a home scrimmage against Pryor elicited cheers from the Hornets’ fans, but the second play became the topic of conversation following the practice session. Hilldale senior Ryan Heppel found a seam for a 66-yard touchdown run down the sideline. On the opposite sideline bench, teammate Zach Wallace grimaced in pain with a collection of players, coaches, managers and trainers in his company. Wallace, on the play previous to the touchdown, took a reverse handoff from running back Michael Chang and ran for four yards before barreling over a Pryor player. As the junior defensive end/wideout hit the ground, he landed awkwardly on his left arm when another Pryor defender jumped on top of him for a hit that was arguably delivered after the whistle blew. Hilldale coach Don Hendrix said that Wallace was taken to the Muskogee Regional Medical Center for X-rays and other tests to determine the severity of the injury. Hendrix spoke with Wallace’s mother and father late Friday night. He was told that the first diagnosis showed Wallace dislocated his elbow and suffered torn tendons. The preliminary ruling, according to the coach, was that Wallace could miss up to six weeks. He’ll have another evaluation next Friday, Hendrix added. To make matters more frustrating as the team prepares to open its season at Skiatook in six days, Hilldale lineman Sean Hale injured his right ankle after a player apparently rolled up on him. Depending on the severity, Hale could miss a couple of games. Chang also added that he might have sprained his right ankle on Hilldale’s third offensive series, but he walked off the field on his own power. “We’ve got a lot of work to do and that’s about it,” said Heppel, the team leader in tackles last year, in light of the team’s sudden health issues on that side of the ball. On a positive note, Heppel wound up being Mr. Offense for the Hornets, adding a 56-yard TD catch from quarterback Lance Rolland and a 65-yard TD run to end the scrimmage. On all three scoring plays, Heppel stayed with his blockers until he had enough room to rumble. “I think he’s a little faster than he was a year ago,” Hendrix said. “The thing is, when Ryan runs the football, he runs straight up the middle.” The Hornets defense surrendered their only score on the night on a 3-yard run by Pryor’s Jamel Bates during the Tigers’ fourth offensive series. Hilldale only allowed Pryor 42 yards of total offense before that drive.