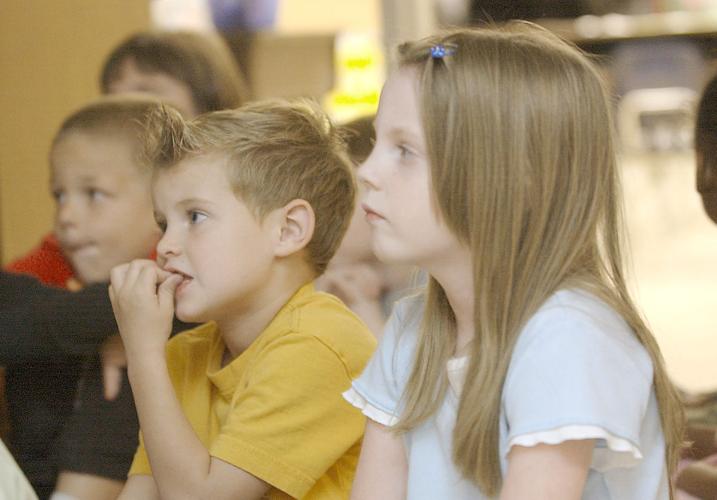 Parker Page, left, and Baylee McMakin sit and watch a video over bats on Tuesday afternoon at Grant Foreman Elementary School in Muskogee. 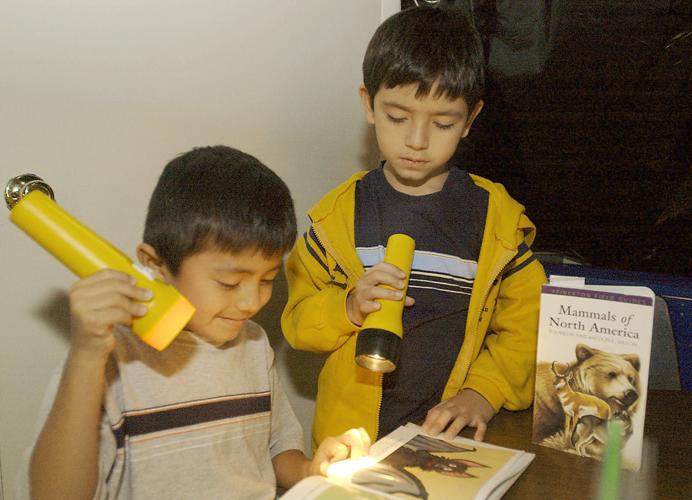 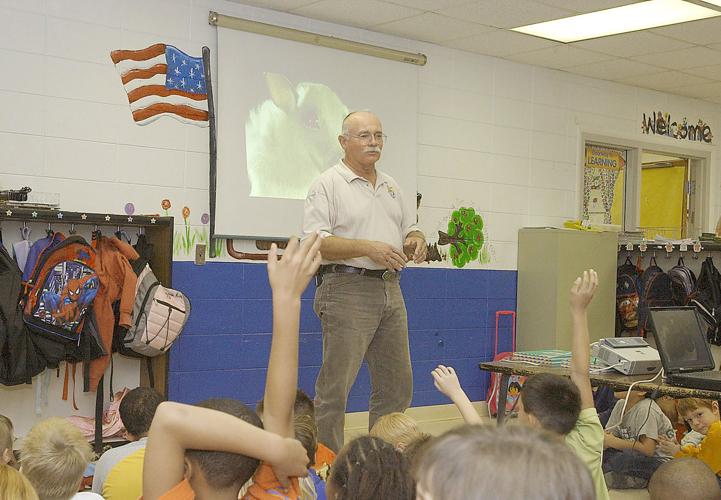 Steve Hensley, with the U.S. Fish and Wildlife Department, talks with Grant Foreman first grader students about bats on Tuesday afternoon in Muskogee.

Parker Page, left, and Baylee McMakin sit and watch a video over bats on Tuesday afternoon at Grant Foreman Elementary School in Muskogee.

Steve Hensley, with the U.S. Fish and Wildlife Department, talks with Grant Foreman first grader students about bats on Tuesday afternoon in Muskogee.

By Cathy Spaulding Phoenix Staff Writer One week to go until Halloween, and Grant Foreman Elementary first-graders are going batty. They’re reading bat stories, learning bat facts, working bat math, even going inside a bat cave to read. On Tuesday, they got a close-up look at bats from Ozark Plateau National Wildlife Refuge Manager Steve Hensley. The Ozark Plateau refuge, located near Vian and closed to the public, was established to protect endangered bats and their habitat. Hensley was not able to bring any real bats to school, but had plenty of close-up batty pictures. “With Halloween coming up, bats have a pretty bad reputation about being scary, but bats aren’t as scary as they seem,” he said. The first-graders oohed when Hensley said 22 different types of bats live in Oklahoma, and some even live in attics of Muskogee houses. Bats in Oklahoma help keep pests away because they all eat insects, he said. “Some bats eat 3,000 mosquitoes in one day” “A lot of them migrate south, just like birds,” he said. Many bats, especially in tropical regions, pollinate just like birds and bees, he said. And, yes, he said, there are such things as blood-sucking vampire bats. They live in Mexico and South America and help the rain forest by pollinating flowers. “They seldom bite people,” he said. The first-graders had already spent about a week learning about bats. Some were not afraid to share bat facts with Hensley. “Bats are mammals, and they’re warm-blooded,” one boy volunteered. The bat unit was one way Grant Foreman first-grade teachers work together to help make learning more fun for kids. The teachers already worked together on units about apples, pumpkins and Christopher Columbus. “It helps kids, because each of us has a different area of interest,” teacher Stacey Koch said, adding that first-year teacher Leigha Ott came up with the idea of studying bats right before Halloween. Ott built a “bat cave” with big trash bags and filled it with hanging plastic bats, pages of bat facts and books about bats. Students who earn 10 “bat points” through good behavior get to go into the dark cave and read using flashlights. “The kids like it because it makes reading more fun,” she said. Koch said her students have learned to spell words that rhyme with bat and have worked math problems such as, “Five bats are in a cave, two fly out, how many are left?” Ott was the one who invited Hensley to speak to all the first-graders. She said Hensley had visited a classroom in Tahlequah when she was a student teacher there. Ott said she likes working together with Koch and the two other teachers, Jami Sullins and Cindy Seitz. “Parents like it because their kids are learning the same thing,” she said, explaining that a student in one class might have a cousin in another class and they’re studying the same topics. Reach Cathy Spaulding at 684-2928 or cspaulding@muskgee phoenix.com