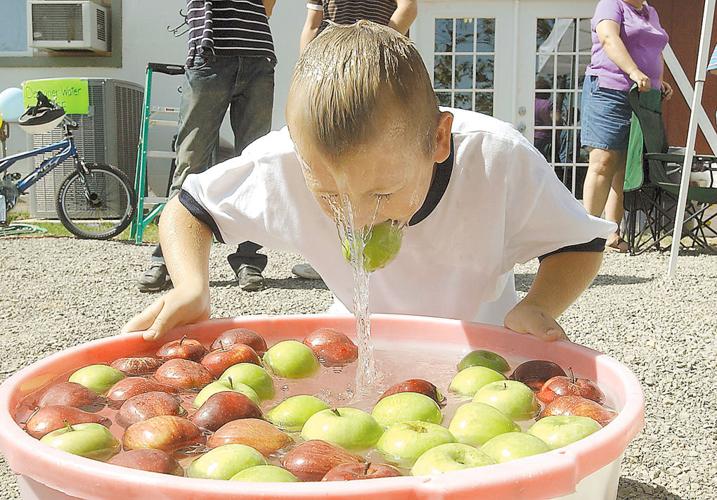 Kyle Allen (9) bobs for apples during the FarmArt Festival on Saturday afternoon in Eufaula. 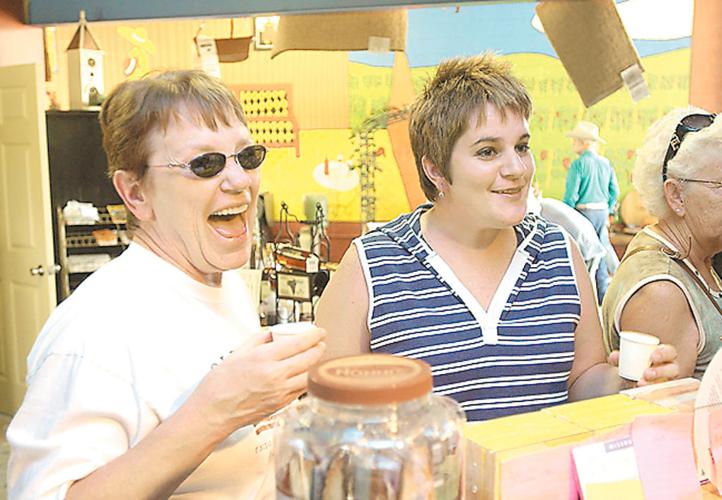 Kyle Allen (9) bobs for apples during the FarmArt Festival on Saturday afternoon in Eufaula.

EUFAULA — Allison Starkey peeked out from under her huge pink and purple feathered hat and stared. When she heard her named called, she strutted her stuff in front of onlookers in the Minnie Pearl Hat contest portion of the Sailing Horse Winery FarmArt Festival. “I picked out the colors,” said Starkey, of Eufaula. “I picked out the flowers too, because I like flowers. They’re nice and they can grow high.” The colors and the flowers were a good choice. Starkey won the fourth-place $10 prize for her design. The hat contest was one of many events held during the first FarmArt Festival. This is the second event the winery has hosted since opening its doors in May. “We have about 12 artists and almost all of them are from around here,” said Rick Gibbens, Sailing Horse Winery owner. “We want to attract more and expose more people to the arts.” The two-story barn, which houses the wine lab for the winery, held almost every aspect of art one could imagine. Gibbens said anything that was handmade or homemade was in the realm of farm art. Vendors lined their tables and tents in and around the small winery barn downstairs. Most of the “art” downstairs was food, however, there was a kiwi soap stand and vintage tractors. Upstairs the tin walls held paintings, while the rest of the upstairs was filled with ceramics and crafts. There was also a wine tasting booth where for $1 patrons could taste the homemade wine. “This is different,” said Carolyn Davis from Eufaula, as she examined a glass bowl. “We’ve just recently moved from Oklahoma City, and we never went to anything like this farm art stuff.” Having something different to do is an option Gibbens is trying to give people in the Eufaula area “Agritourism is something for people in the community to do when they are tired of getting sunburned or the fish aren’t biting,” Gibbens said. “This gives them another activity.” Some of the activities the winery offered during the festival were purely for entertainment while others festival goers were encouraged to participate. Food and wine sampling got the most foot traffic. Some even sampling every time they stopped by. “Those sauces at the table by that wine just kept getting hotter the further you went down,” said David Marsh, president of the Shawnee Tractor and Engine Club, which participated in the event. “That spicy mustard washed down good with the red tractor wine though.” Eric and Kathleen Sparks, from Mustang, are somewhat veterans at art shows. They try to go to all shows they can, Eric said. “I think this is great,” Kathleen said. “We go to quite a few of these but this is pretty nice though.” The art festival did have a different kind of feel than art walks held in bigger cities, but that was the feel Gibbens was going for. “We are striving to be more than just a winery,” he said. “This kind of thing is usually held in a public place, but we want this art to be available to everyone including rural people and country folk.”