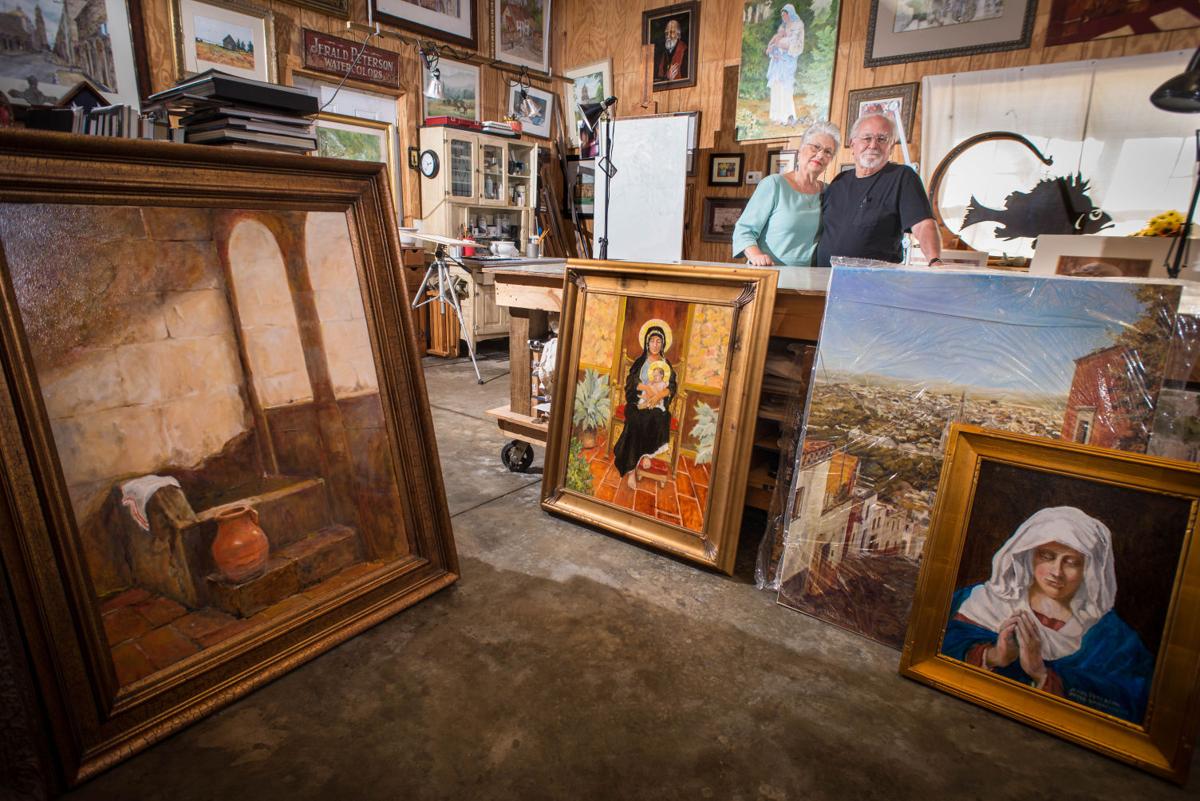 Jerald Peterson and his wife, Molly Peterson, make their home in the same place Jerald does his work. Peterson’s watercolors and oils have an Old World feel. He paints architectural scenes, particularly arches, bathed in light and religious subject matter. 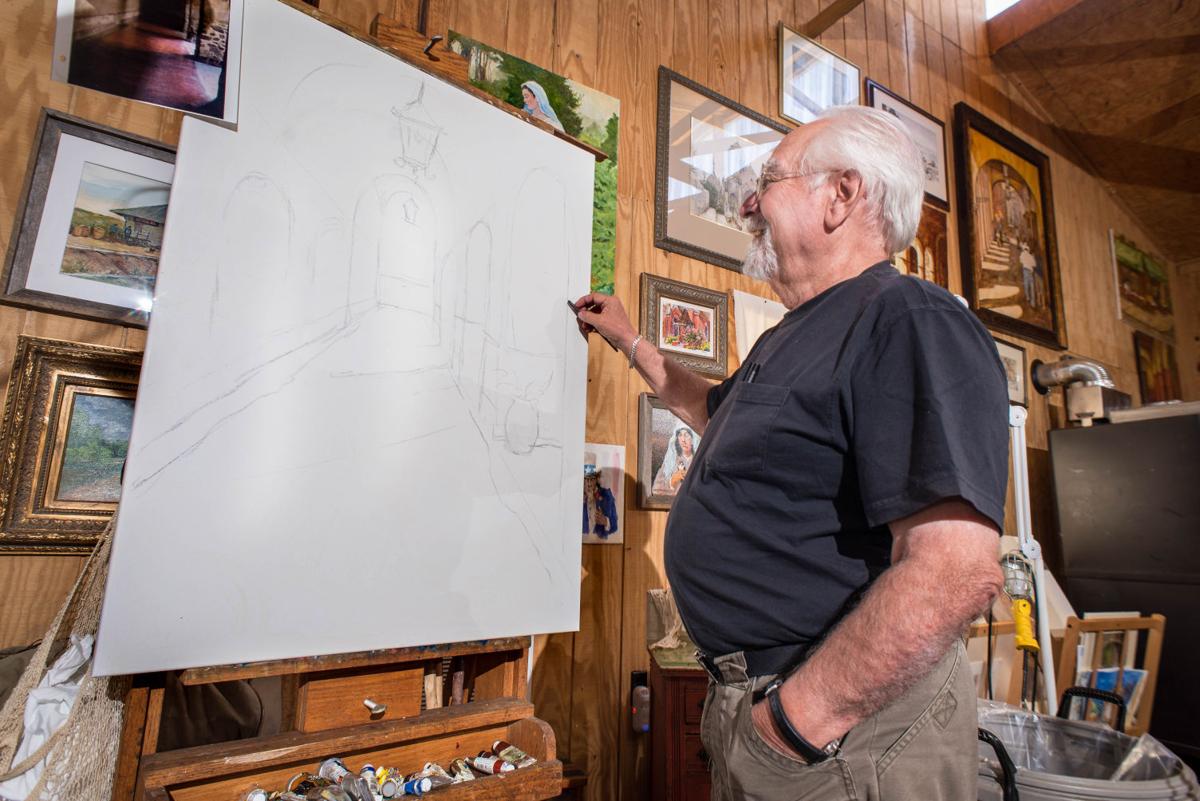 Jerald Peterson sketches the scene that will become the foundation for his next painting. 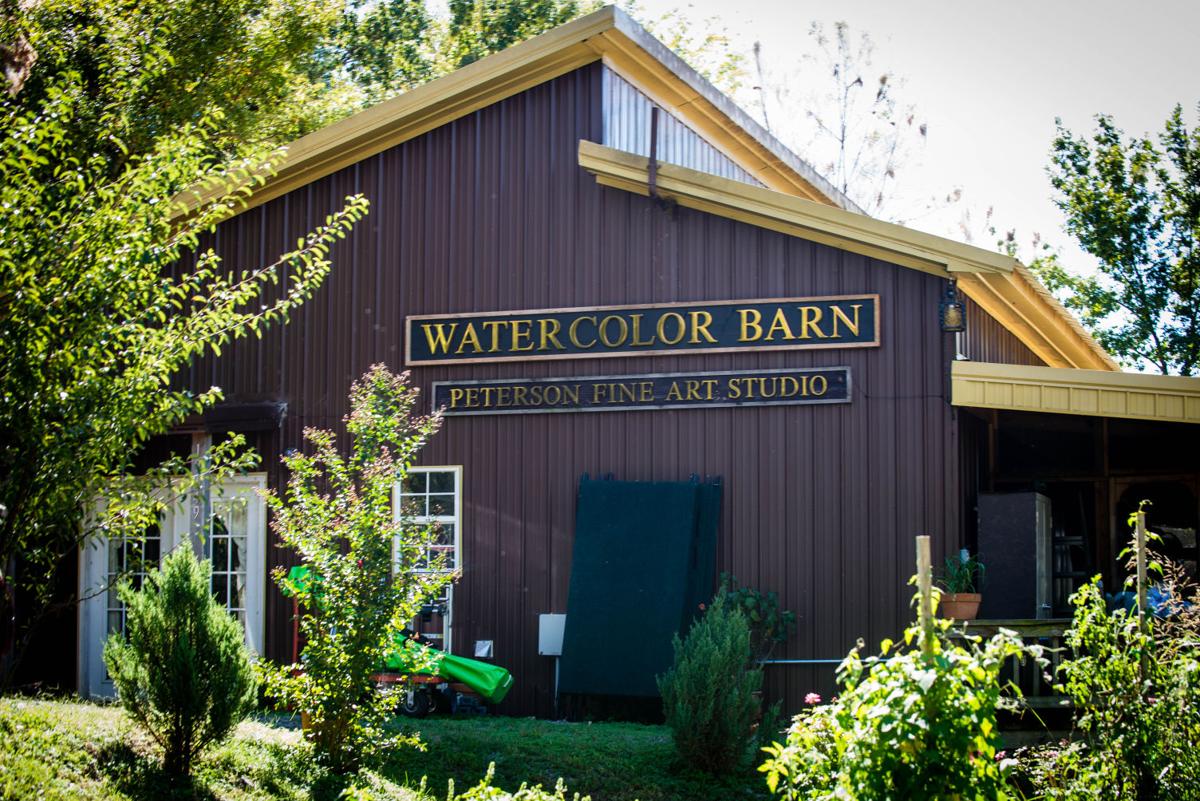 Jerald Peterson and his wife, Molly Peterson, make their home in the same place Jerald does his work. Peterson’s watercolors and oils have an Old World feel. He paints architectural scenes, particularly arches, bathed in light and religious subject matter.

Jerald Peterson sketches the scene that will become the foundation for his next painting.

Tahlequah artist Jerald Peterson paints the world on his canvas.

It could be a shady sidewalk cafe in the St. Germain area of Paris. It could be the sun shining through bleached arches in Morocco. It could be a monk’s red wash basin from Mexico.

Peterson, now 75, saw a lot of the world through his 24 years with the CIA.

“We lived in Europe, we lived in north Africa, we lived in Mexico,” said the artist’s wife, Molly Peterson. “So, it’s all that Old World look and architecture.”

She joked that “when people ask me what Jerry likes to paint, I say weathered wood, peeling stucco and rust.”

Jerald Peterson said he painted — doodled, actually — as a hobby before he began working with the CIA. But it wasn’t until he saw the allure of those faraway places that he started painting in earnest. He said he loved the sunlight, the people and the architecture. He said he especially admired the arches he found in Moroccan architecture.

“When we were in Morocco, he began painting some Moroccan scenes — they’re still weathered wood, peeling stucco and rust,” Molly Peterson said. “He started painting little watercolors and hanging them on our walls. People would come in — he knew a lot of diplomats and they had disposable income and — and they would buy them off our walls. That was our first hint that he could do something that was commercial.”

He became popular in Paris, she recalled.

“He would paint some little Paris street scene and before I got it hung, it was sold for $300, so that was good,” she said.

“When we went to Mexico we started noticing these huge monasteries,” Molly said. “The 16th Century monasteries are the oldest ones. They were built by the Spanish, so of course they look European.”

Molly Peterson said those monasteries made her husband well-known — especially among Texas buyers.

“Our best market is Dallas, Fort Worth, Houston, where there is Spanish-style architecture, and these women like to repeat that architecture in their homes,” she said.

Other Mexican scenes, as well as Mexican people and history, also have caught Jerald Peterson’s eye. He caught a trio of jazz musicians in San Miguel de Allende. He has an oil painting of a pair of Mexican Revolution soldiers and their dog in his home.

Peterson retired from the CIA at age 50.

“My idea was to retire and paint, and sell paintings, having no idea what that meant,” Jerald Peterson said. “Selling paintings is not that easy. You have to take the mountain to Mohammed. I had no idea how hard it was.”

Fortunately, CIA retirement benefits helped to make it possible for Peterson to go into the art business.

Peterson said he and his wife moved to Tahlequah after reading about the town in “The 100 Best Places to Retire.” They also came here to be close to family. Jerald is an Edmond native. Molly came from Okmulgee.

The artist since has discovered yet another world — of the Spirit. After the Petersons became Catholics seven years ago, Jerald Peterson expressed his faith through his paintings. One painting shows the Virgin Mary carrying a lamb and the Baby Jesus in her arms. A snake is under her foot.

It is a reference to the prophetic passage in Genesis 3:15 about the seed of woman (Jesus) crushing the serpent’s (Satan’s) head.

Peterson first took his art to the annual craft show at Fin and Feather Resort. He went on to take his work to juried fine art shows.

“We don’t do craft shows,” Molly Peterson said. “You send off an application to a show you want to do. You get either a rejection — that hurts — or an acceptance. Then, you start making your plans.”

They also advertise often in such publications as Southwest Art magazine.

The world now surrounds Peterson in The Watercolor Barn, a fine arts studio that doubles as his home. The studio takes up nearly half the space. Dozens of paintings look down from his walls. The couple’s tiny bedroom is in a corner loft.

Cracked, creamy, caramel or chocolate — we can’t have Christmas without candy.