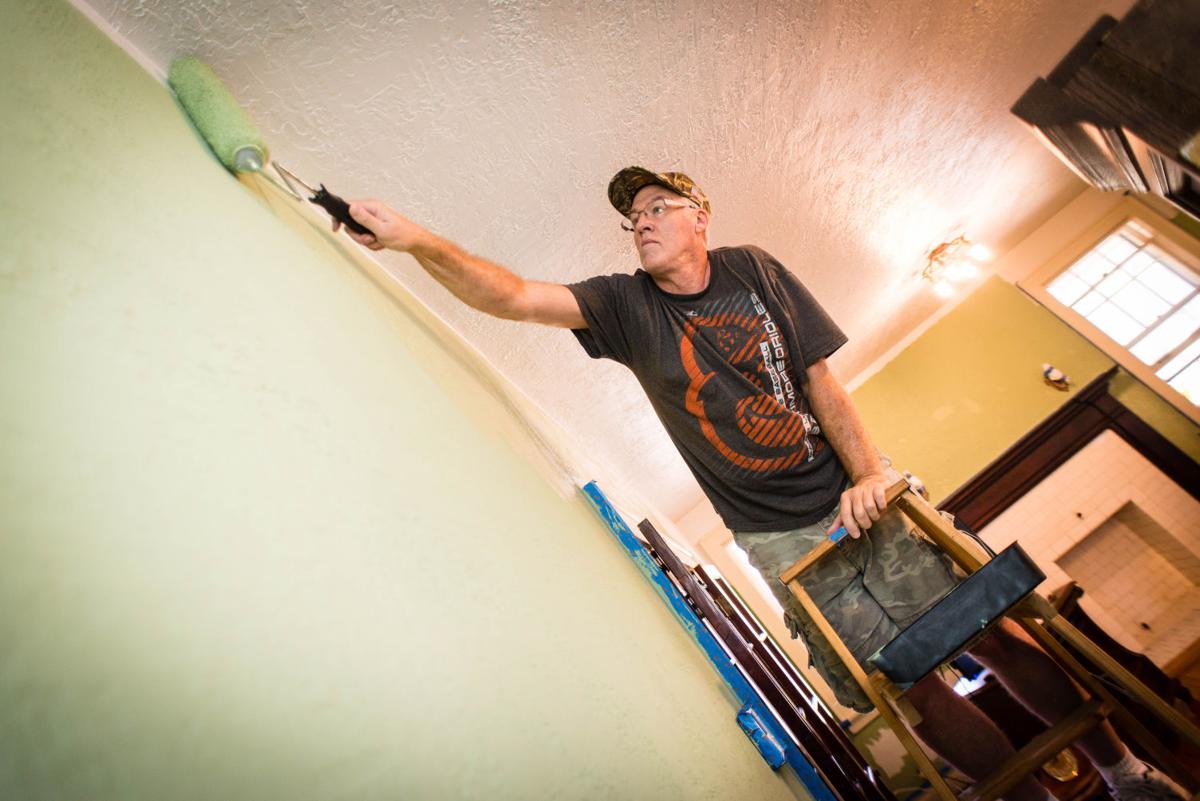 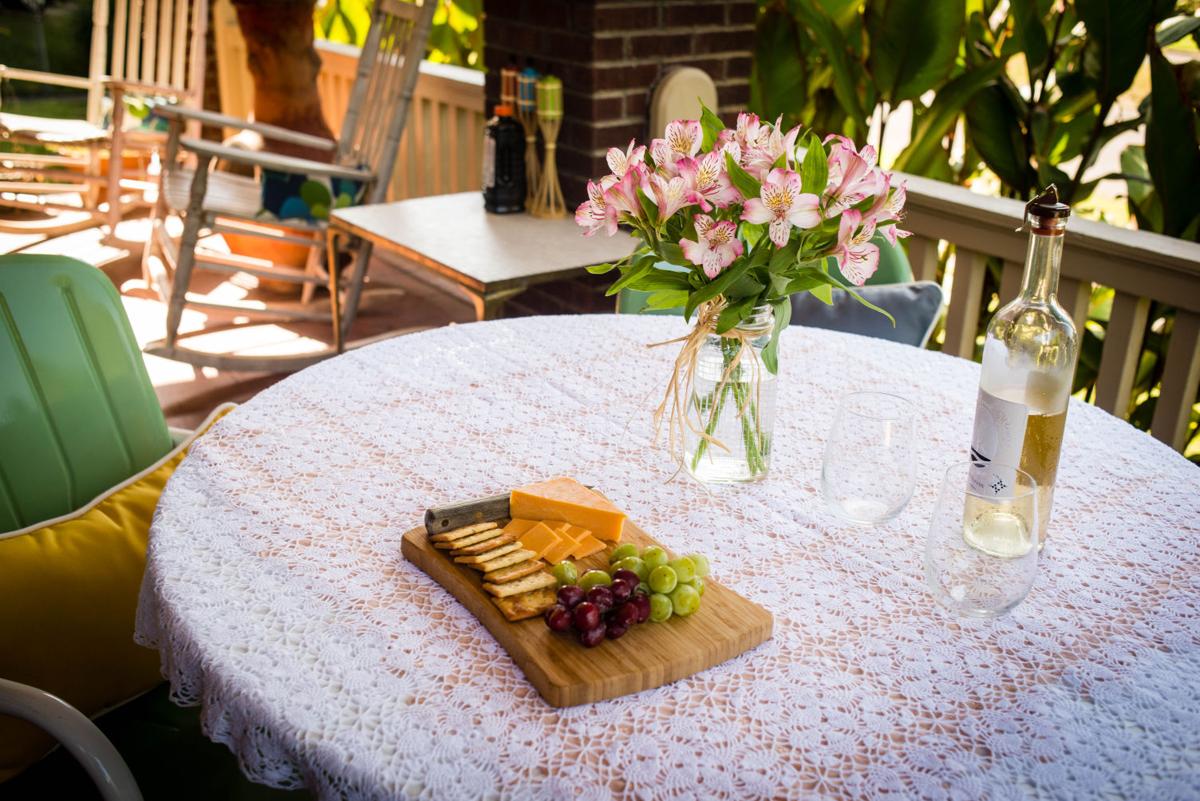 A brunch of wine and cheese is set out on the front porch of Doug Buse’s 95-year-old Kendall Place home. Doug is renovating the home but staying true to the original style of the craftsman. 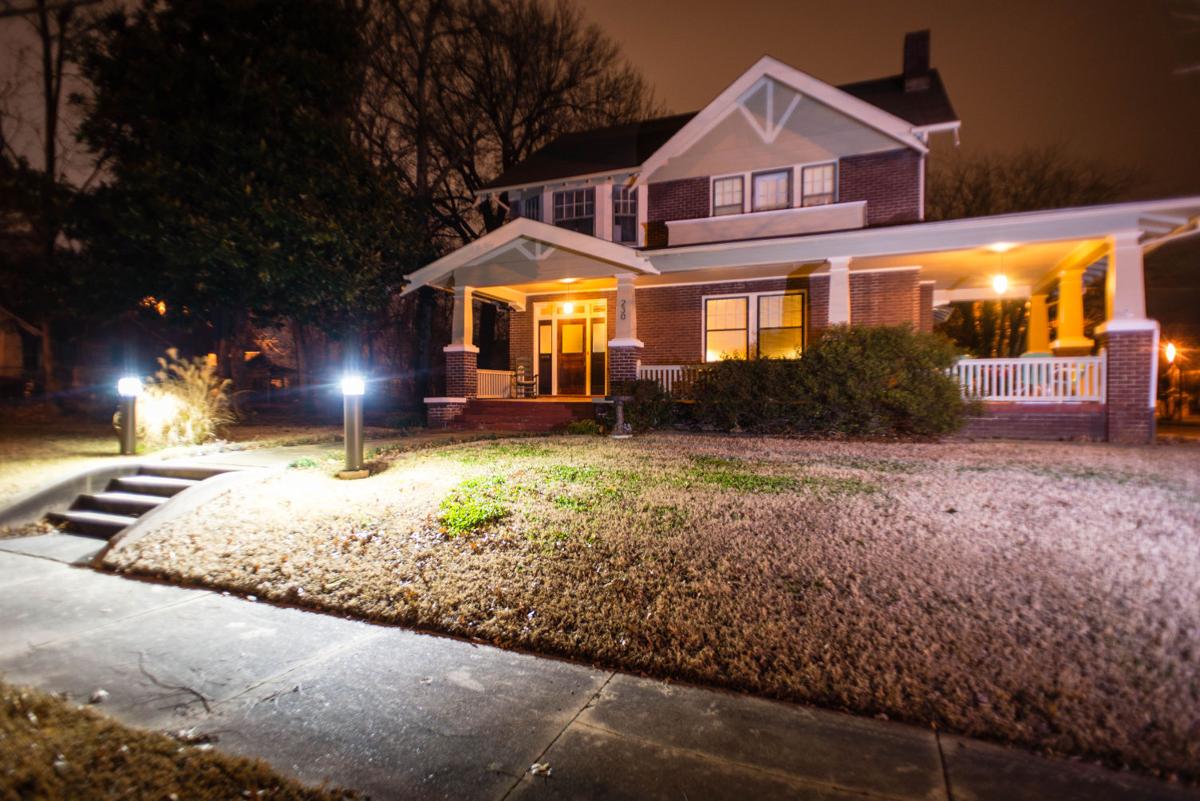 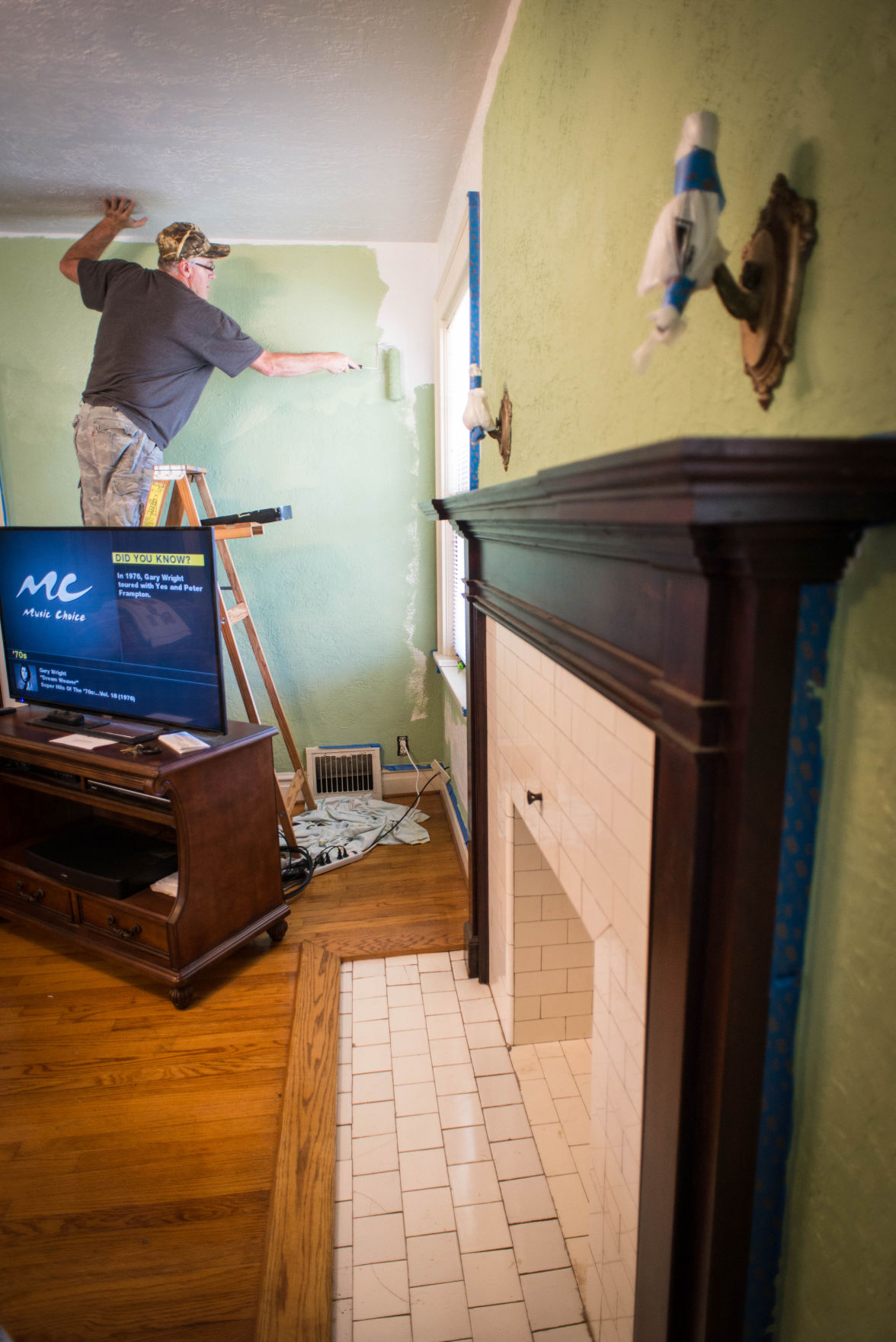 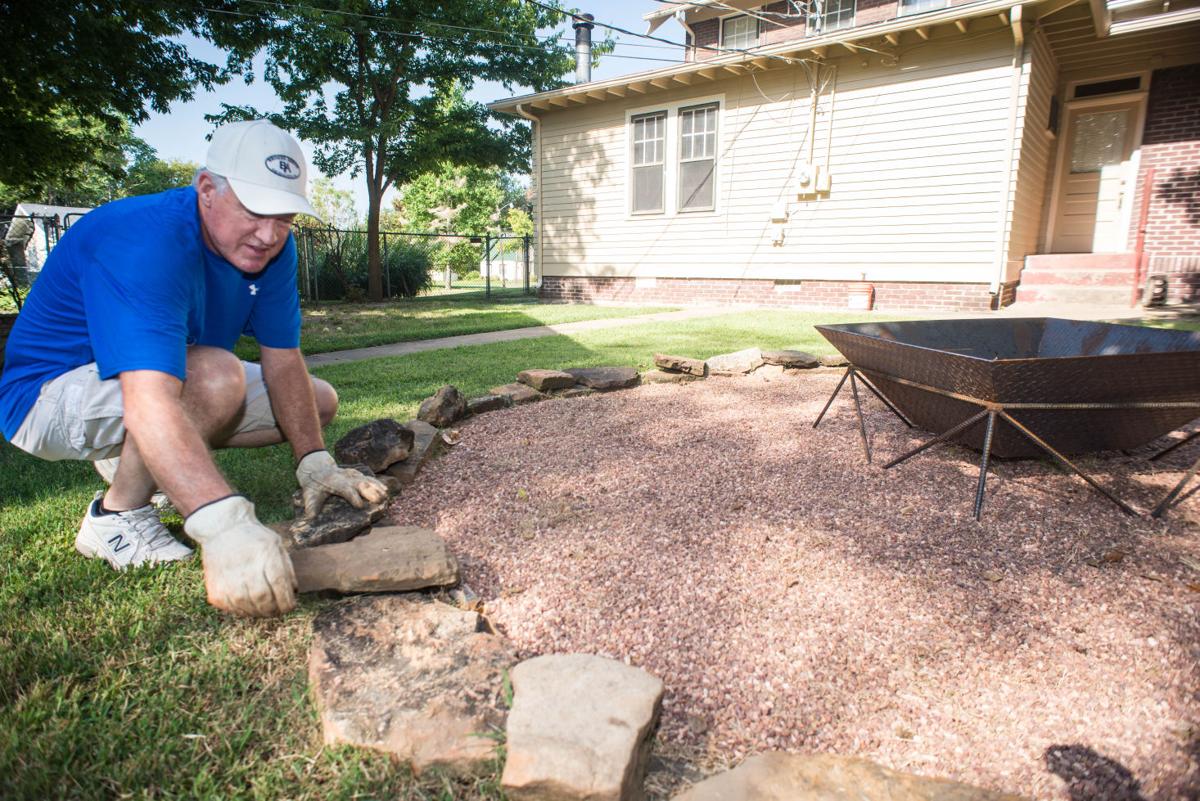 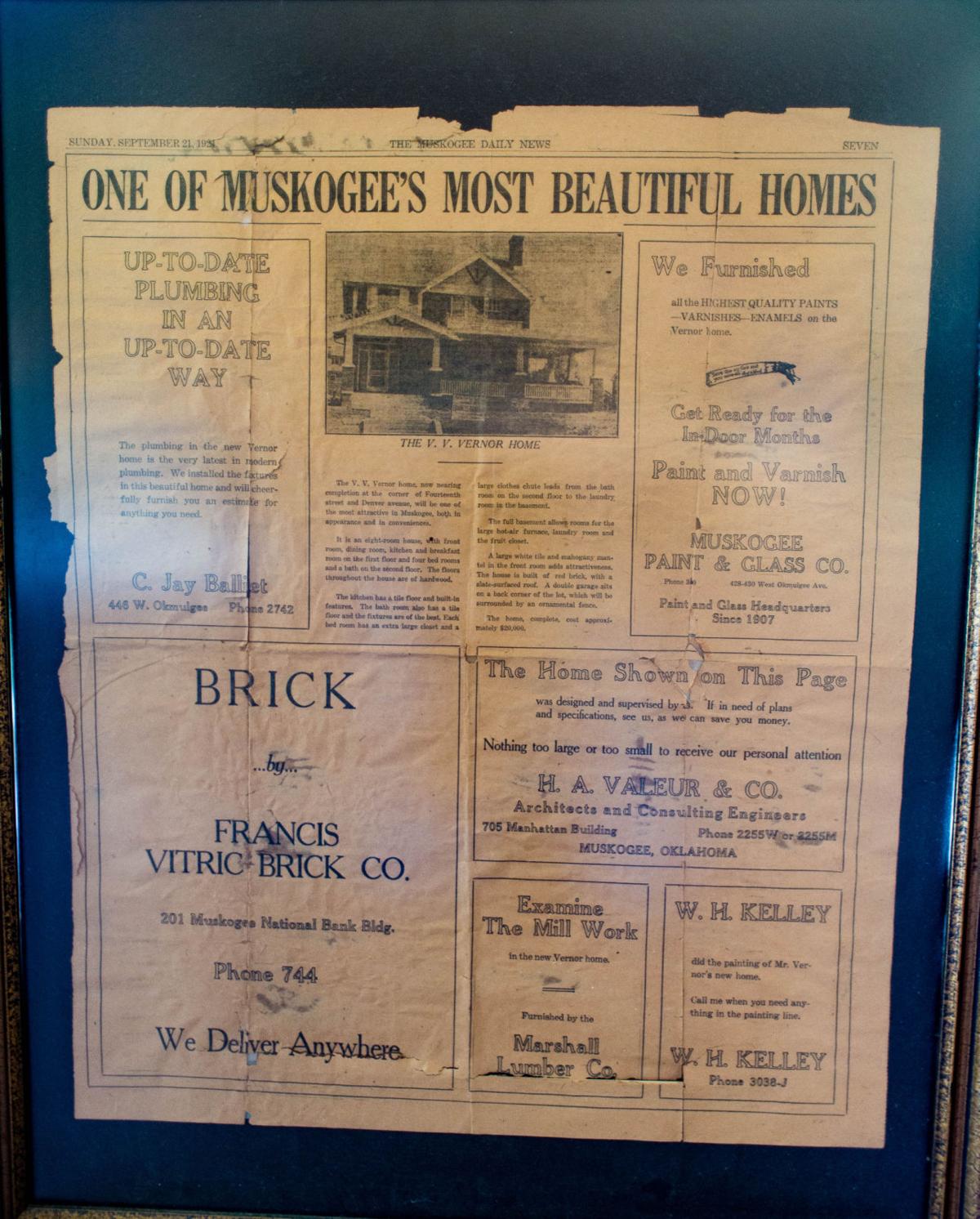 A newspaper article from Sept. 21, 1924, calls the home Doug Buse now owns "One of Muskogee's Most Beautiful Homes."

A brunch of wine and cheese is set out on the front porch of Doug Buse’s 95-year-old Kendall Place home. Doug is renovating the home but staying true to the original style of the craftsman.

A newspaper article from Sept. 21, 1924, calls the home Doug Buse now owns "One of Muskogee's Most Beautiful Homes."

That’s the best way, he says, he could remodel eight rooms. The house at 14th and Denver streets features four bedrooms on the second floor, plus a kitchen, living room, dining room and den on the first. It also has two bathrooms and a basement.

All that remodeling might seem like daunting work, but not for Doug. He said much of the house already was in good shape when he bought it at the end of 2014.

The house was built in 1920 and features bay windows, an upstairs porch/balcony and an added-on den.

A tattered newspaper page from Sept. 21. 1924 stands framed over Doug’s mantle. It calls the house “One of Muskogee’s Most Beautiful Homes.”

Doug said he was attracted to the house because of its historic value and location.

“I was born and raised in Muskogee and I always loved Muskogee history,” he said. “And my sister and my brother-in-law live on 13th Street.”

He said he also liked the corner location with its wrap-around porch on the west and south sides.

Even the basement was in good shape. Doug recalled expecting the basement to be musty and moldy after a rain shower.

“But it was completely dry,” he said.

Doug, who works at Broken Arrow Electric Supply, said he had money left over after buying the house and selling his former home. That gave him incentive to start the renovation.

So far, Doug has almost completed work on the living room. The remodeling has included easing some of the settling the house has undergone over the years, he said. There also are minor cracks and drywall to tend to.

He is replacing a pair of old ceiling lights with ceiling fans that reflect the Craftsman style. He also repainted the living room a vivid green.

He soon will be ready to move into the dining room.

“There is one spot, 2 feet by 4 feet, where I have to repair the floor,” Doug said, adding that he was fortunate to find a friend who had a match for the red oak.

Doug said he expects the kitchen to need the most updating work.

“I haven’t decided what I’m going to do,” he said. “I have very little counter space.”

“The appliances needed updating,” he said. “I already bought them and they’re sitting in storage.”

He said he also has lots of work to do on the den, which is covered in wood paneling.

“I have to redo a wood-burning stove,” he said.

The house has a laundry chute that reaches from the second floor to the basement.

Like many homes of that era, the house has two sets of stairs. One stairway, in the entry, greets visitors with a curved wooden bannister on white spindles. The back stairway is a popular place for his cats, Howard and Moira.

The upstairs hallway shows generations of different wallpaper styles, each one tearing away and revealing another.

“In one room, I found five layers,” Doug said.

He has not decided just what to do with the upstairs bedrooms. He said one of the bedrooms is for when his grown daughter comes to visit.

“I’m in a place where I might take a wall out and make a guest bedroom,” he said.

Doug is doing much of the work on his own. He said a family member made a backyard fire pit for him.

Doug restored some metal lawn chairs and tables and repainted them bright green.

“My grandparents had two and I sand-blasted them,” he said.

One of the few modern touches at Doug’s home is a pair of lighted posts on either side of his front sidewalk.

Restoring a piece of Muskogee’s history has special meaning for Doug, who serves on the Muskogee Historic Preservation Commission.

“The house has its own historic stamp,” he said. “I love it that these houses tell the stories of Muskogee’s past. We can photograph them and write about them, but once they’re gone, they’re gone.”

I had an interesting question posed to me recently; Is there a wine that pairs well with game?