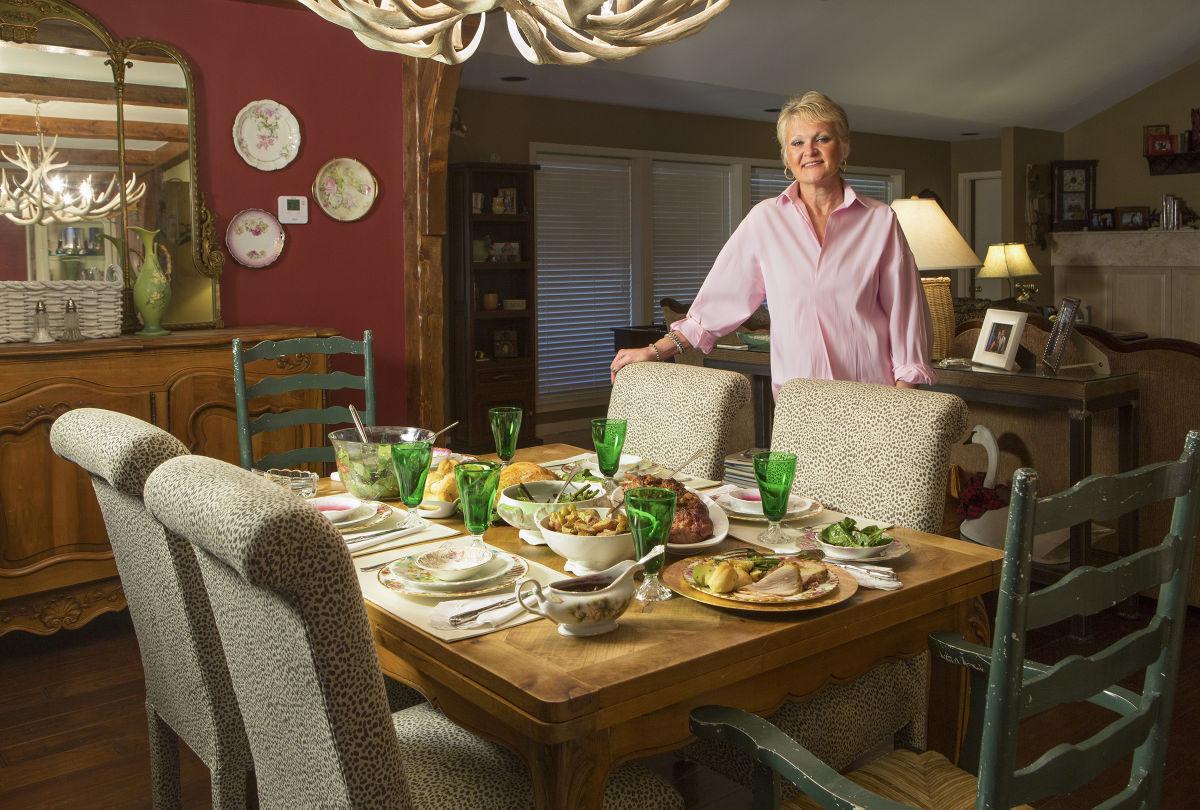 Sue Vanderford shares her love of cooking with her family for the holidays. 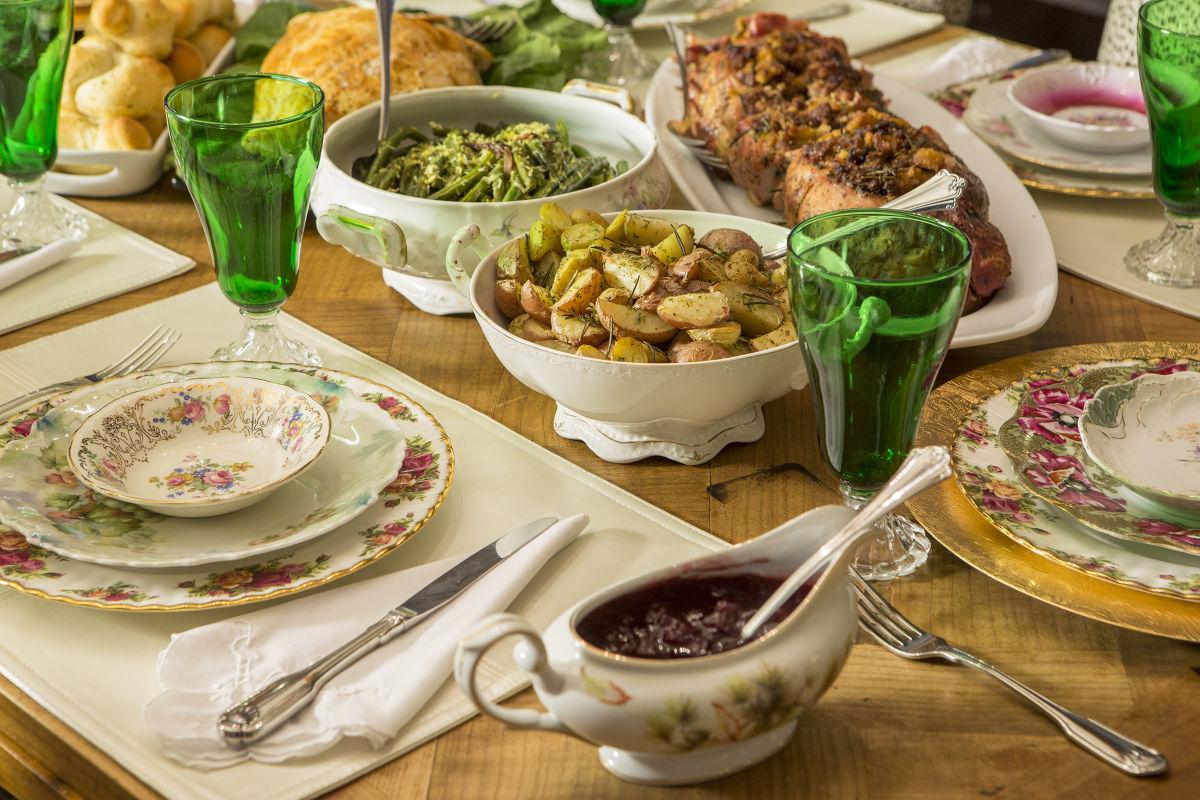 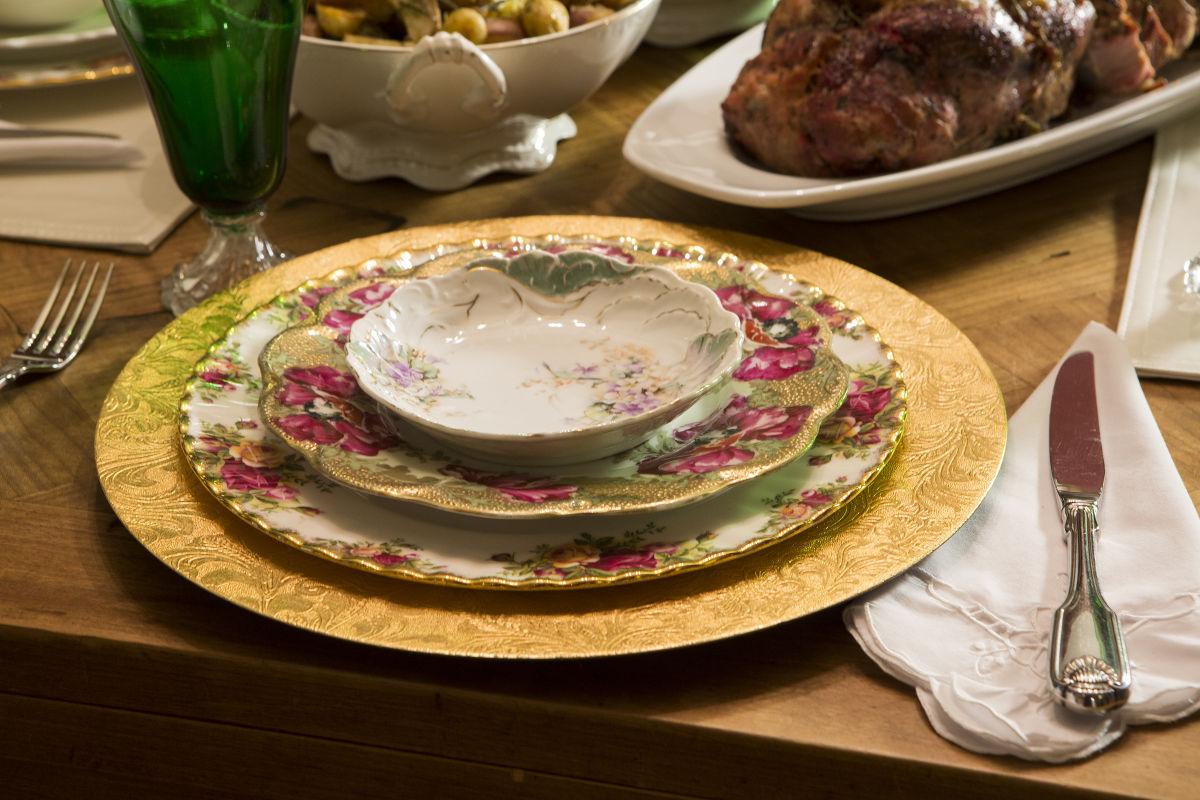 Sue sets her table with a charming eclectic collection of mixed china found throughout the years. 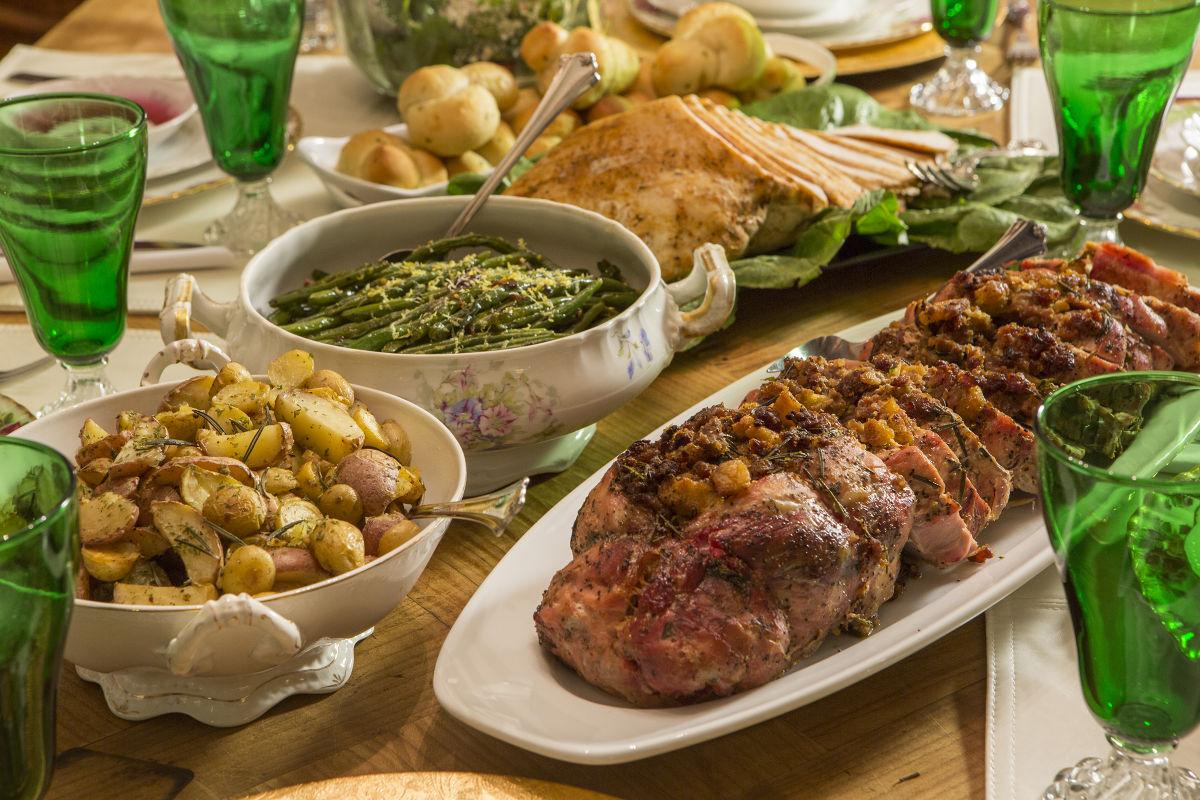 Smoked pork loin is stuffed with fresh herbs and sausage. 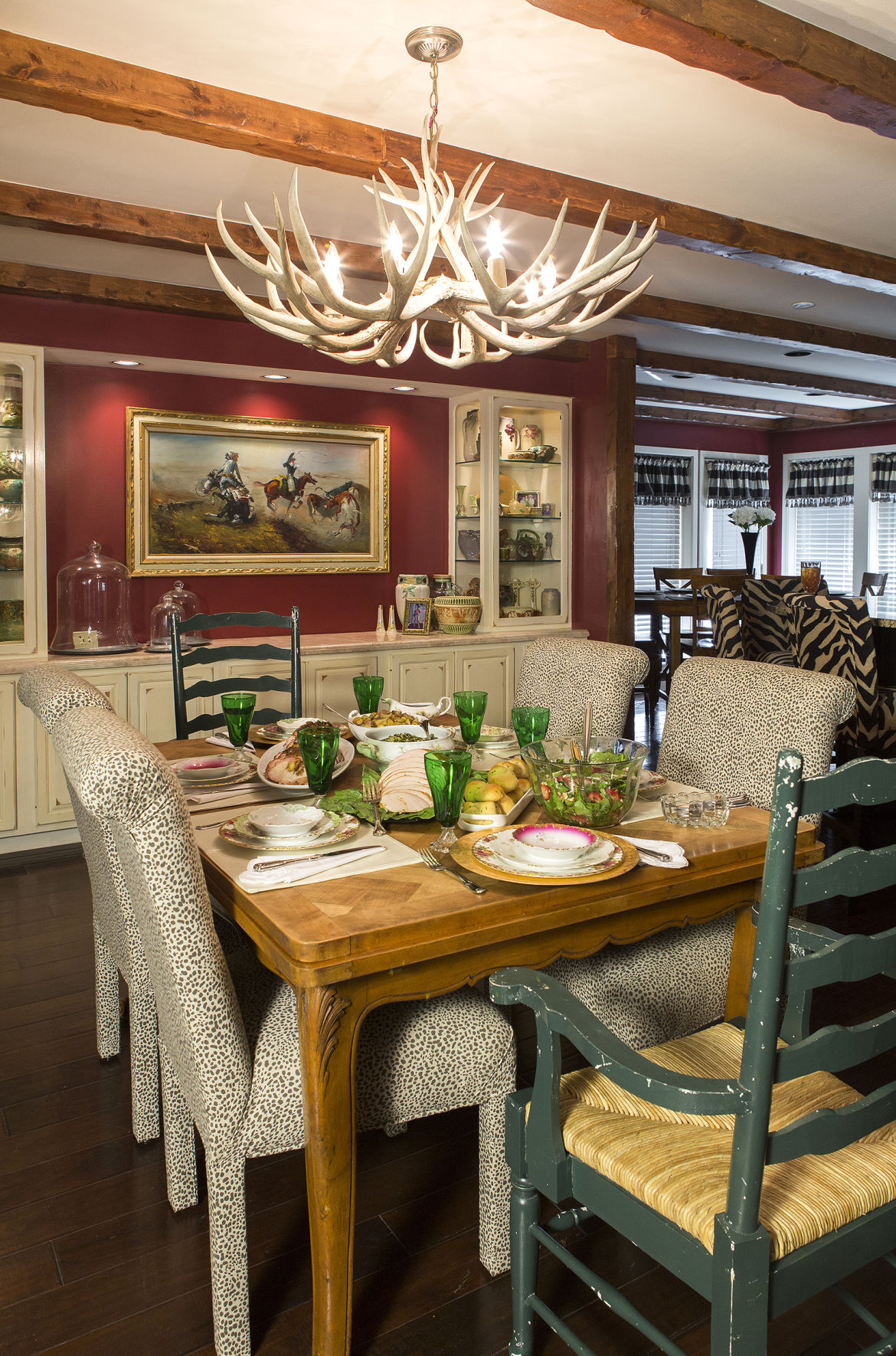 The Vanderford’s warm and inviting dining area sits between the kitchen and living areas of the home, perfect for entertaining. 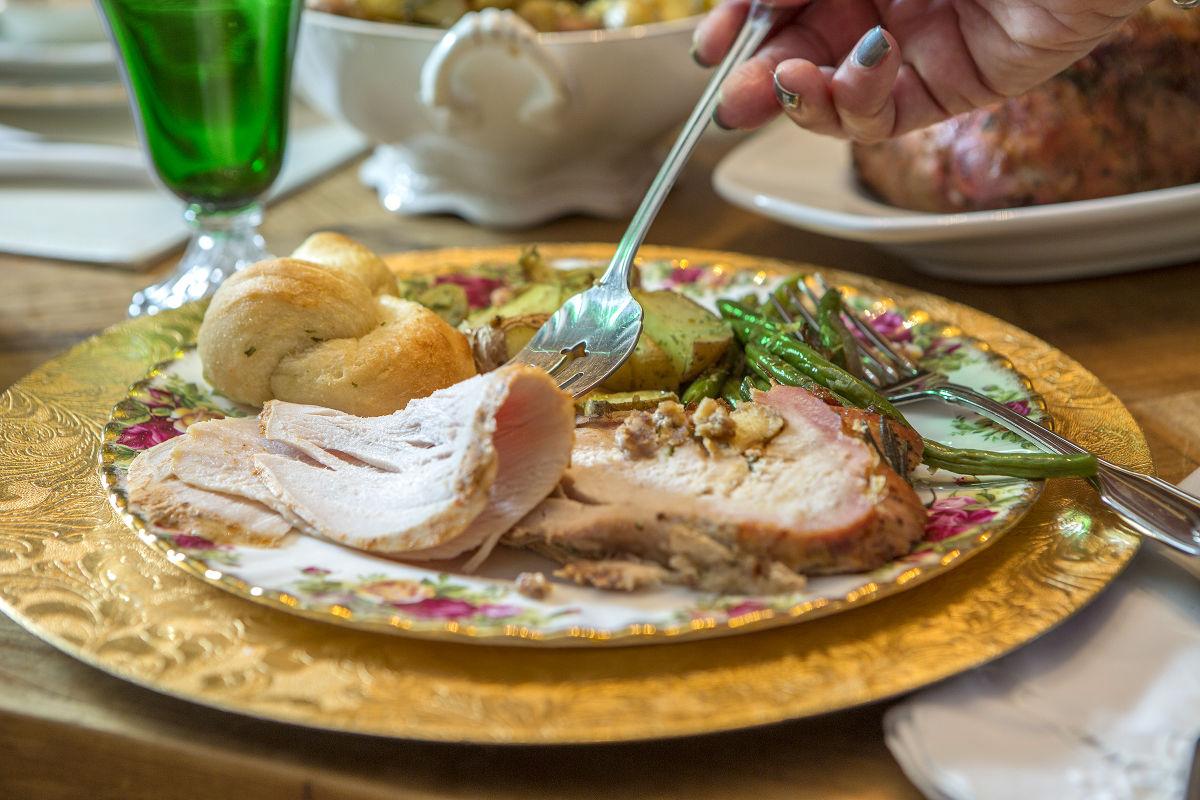 Sue Vanderford serves up a delicious-looking slice of turkey.

Sue Vanderford shares her love of cooking with her family for the holidays.

Sue sets her table with a charming eclectic collection of mixed china found throughout the years.

Smoked pork loin is stuffed with fresh herbs and sausage.

The Vanderford’s warm and inviting dining area sits between the kitchen and living areas of the home, perfect for entertaining.

Sue Vanderford serves up a delicious-looking slice of turkey.

Hours may seem endless when you smoke a turkey for a holiday feast.

But, take David Vanderford’s word for it. That moist texture and hickory taste make it worth the wait.

“All we use is hickory,” Vanderford said. “The smoke penetrates the meat.”

Sure, you say. That’s easy for him to do. After all, David and Sue Vanderford have owned Cowboys Bar-B-Q & Grill for the past 37 years. And, yes, they do smoke their holiday turkeys in one of the restaurant’s three commercial Southern Pride Cookers.

However, it is possible to get that smoked flavor at home, Vanderford said.

“You can do it on the char grill, with wood chips,” he said. “You could do it not only with a char grill, but also a charcoal grill. You can use a wood-fired pizza oven; it still gets the smoke. They make all kinds of little smokers.”

Reprints of photographs from the Holiday 2015 issue of Green Country Living are available here.

Vanderford said he pre-seasons the holiday turkey with his own barbecue seasoning. He coats it with a dry rub, then keeps it in the refrigerator for 24 hours.

Low and slow are the main words to remember when cooking. Vanderford said he sets the smoker for around 200 to 225 degrees and cooks for about an hour a pound.

So, a 6-pound turkey breast might take six hours, he said.

A Vanderford holiday meal also is likely to include a smoked, stuffed pork loin.

Sue Vanderford said she gets link Italian sausage, removes its casing and browns the meat. The sausage helps flavor and moisten the pork.

“I put fresh basil, rosemary and garlic in, brown the sausage, split open the tenderloin and we smoke it,” she said. “But you can cook it on the grill. You can cook it in the oven.”

David Vanderford said the stuffed pork could be smoked at 250 degrees for about five hours.

“At Christmas, who knows,” she said. “We may do Mexican. We may do Italian.”

“This year it’s going to be pizza, David Vanderford said, adding that they had just bought a wood-fired pizza oven.

Smoked meats aren’t the only part of the family tradition.

“Something we do every holiday, at 1 p.m., we eat dinner,” Sue Vanderford said. “We’ve had police officers who lived out of town and if they were on duty would come by at 1. They know there’s always plenty.”

The Vanderfords say they entertain 15, 20, 25 people at their holiday feasts.

Sue Vanderford said she doesn’t keep recipes for her holiday meals. She said she does have a collection of cookbooks. Of course, she also has nearly four decades of restaurant experience.

“I kind of look at recipes based on what I make and I look at and I say ‘mm, I don’t like this” and I might add this,” she said. “A lot of times I don’t use recipes at all.”

Her strawberry spinach salad is an example. It simply is a mixture of strawberries, pecans, and crumbled blue cheese. It’s topped with a homemade poppy seed dressing.

“It’s just a concoction I came up with,” she said. “It’s got apple cider vinegar, Worcestershire, onions, oil, poppy seeds, sesame seeds, just all kinds of stuff. I just throw it together, shake it up.”

In a large skillet, heat 1 tablespoon of the oil over medium-high heat. Add the onion; cook for 2 minutes, stirring constantly. Crumble the sausage into the skillet and cook until brown, breaking meat up with a fork. Stir in the Panko and basil; cook for one minute more. Let cool, then finely chop the sausage mixture.

Cut a vertical slit down the center of the port roast, creating a 3-inch deep pocket and leaving about 1/2 inch uncut at each end. Stuff the sausage mixture into the pocket. Wrap kitchen twine tightly around the roast to enclose the stuffing. Place the roast in a roasting pan and season generously with salt and pepper. In a small bowl, stir together the remaining 3 tablespoons of oil, rosemary and garlic; coat the roast with herb mixture. Cover roast with plastic wrap and chill for at least four hours or overnight.

Let the roast come to room temperature while you prepare the grill for medium direct heat (alternatively preheat oven to 500 degrees) Grill or roast the pork for 25 to 30 minutes or until an instant read thermometer inserted in the thickest part of the roast registers 145 degrees, turning the roast every 10 minutes. Transfer roast to a cutting board and let stand for 5 minutes before carving.

Cut potatoes in half or quarters, place in a bowl with olive oil or salt, pepper and garlic; toss until potatoes are well-coated. Transfer the potatoes to a sheet pan and spread out into one layer. Roast in the oven for 45 minutes to an hour until browned and crisp. Flip twice during cooking to ensure even browning.

Remove potatoes from oven, toss with parsley, season to taste.

Green Beans with Lemon and Garlic

Blanch green beans in a large stock pot of salted, boiling water until bright green in color and tender crisp, roughly 2 minutes. Drain and shock in a bowl of ice water to stop from cooking.

Heat a large heavy skillet over medium heat. Add oil and butter. Add garlic and red pepper flakes and saute until fragrant, about 30 seconds. Add beans and continue to saute until coated in the butter and heated thoroughly, about 5 minutes, add lemon zest and season with salt and pepper.

Cracked, creamy, caramel or chocolate — we can’t have Christmas without candy.