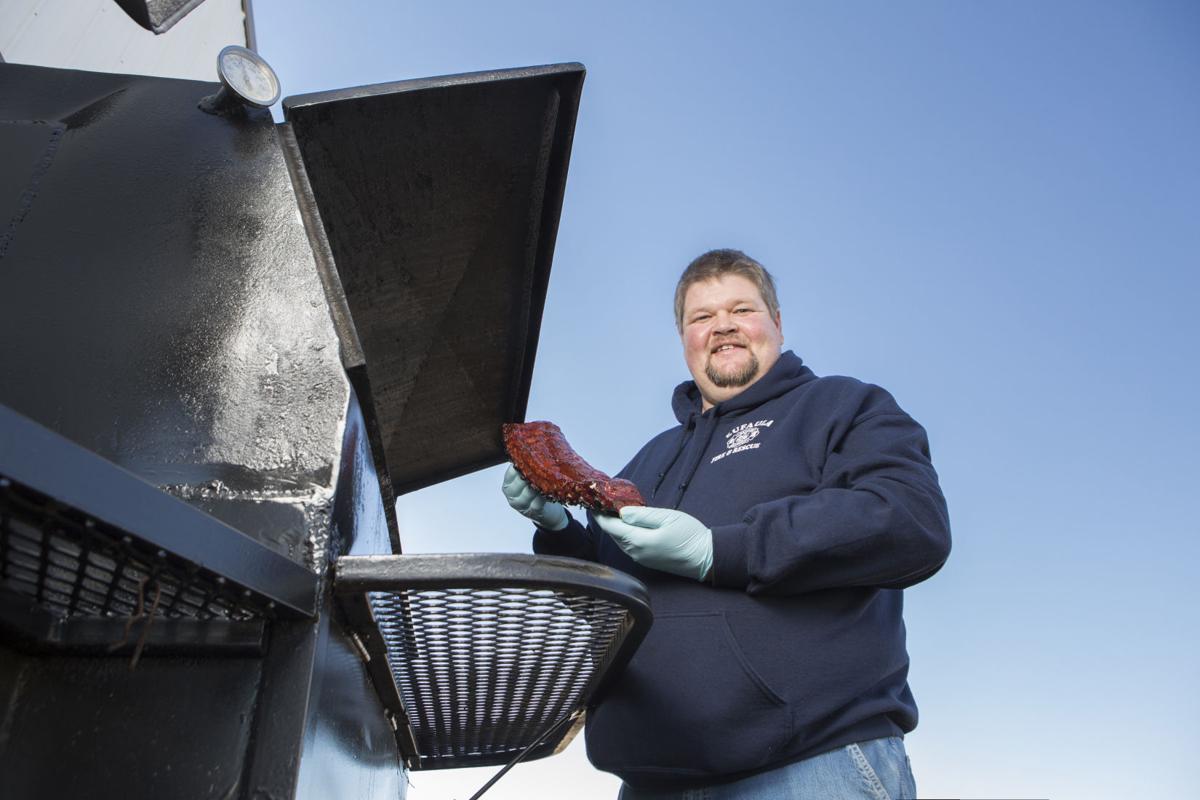 Jerry Taylor reigns over the grill as a colossal barbecue master. 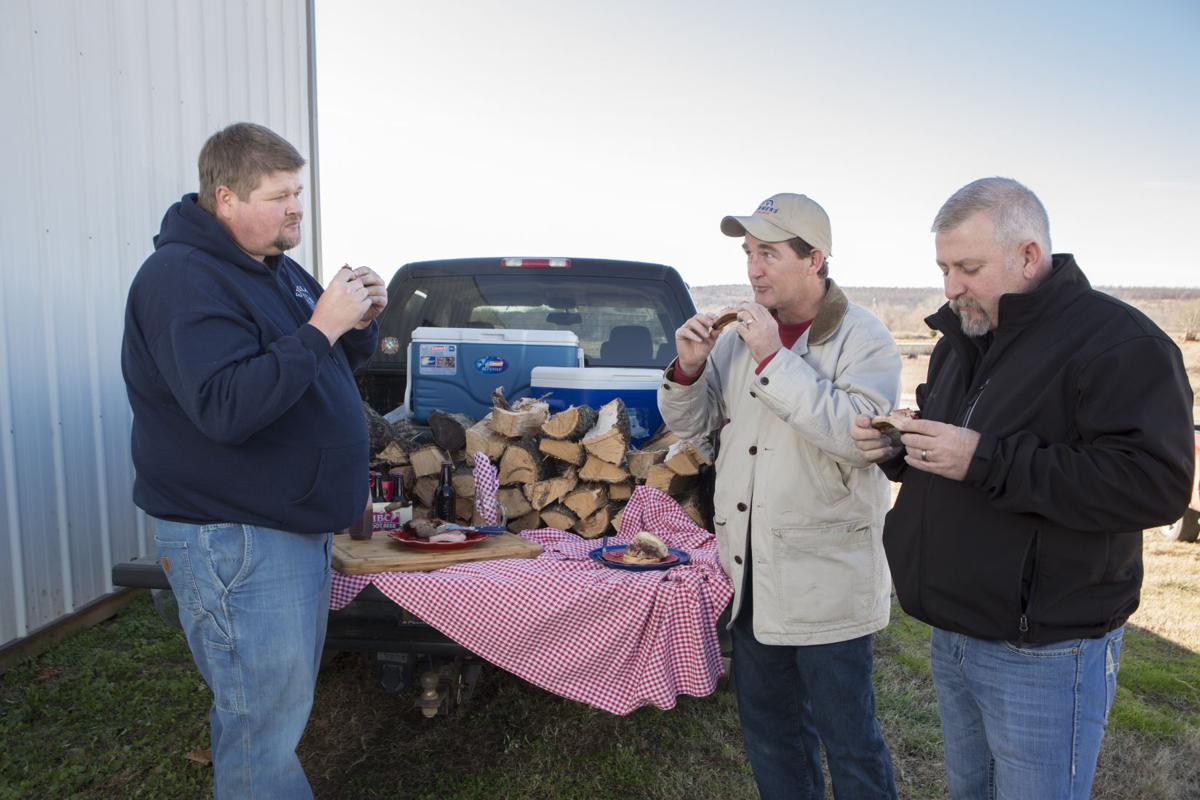 Fellow volunteers Chuck Tinkersley and Charles Urquhart sample the tasty morsels Jerry Taylor produced for the 4-H Pig Show and Jackpot.  Meat for the event was donated by the Oklahoma Pork Council. 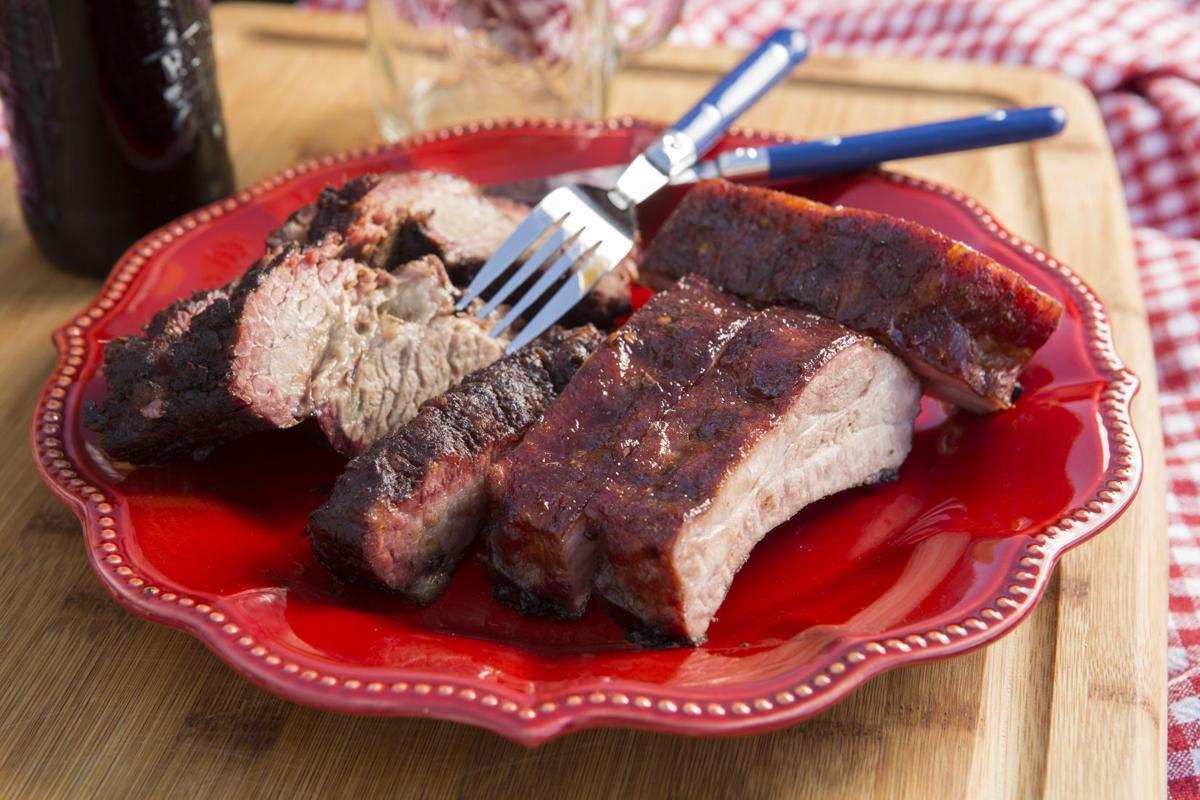 A sample of his barbecue will show Jerry Taylor is a colossus of the barbecue grill, with the awards to prove it. 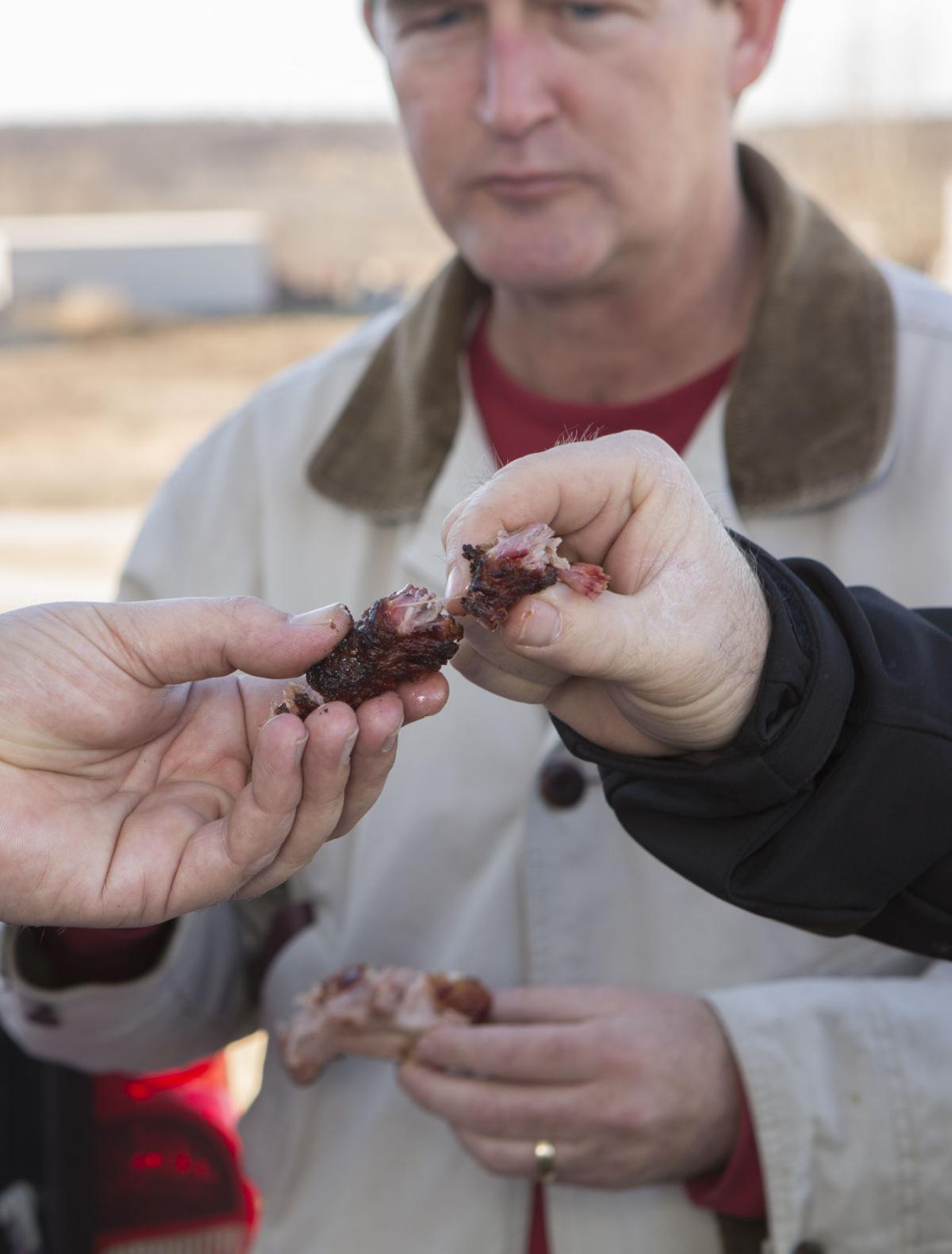 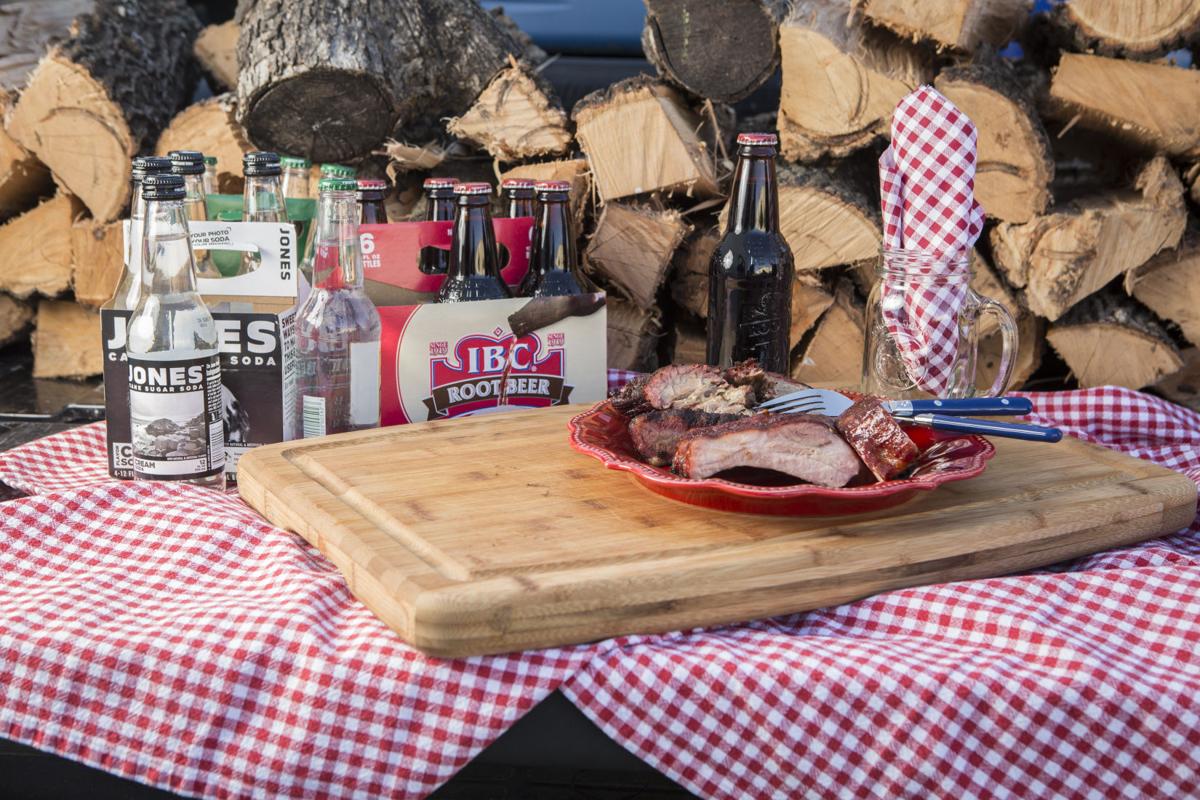 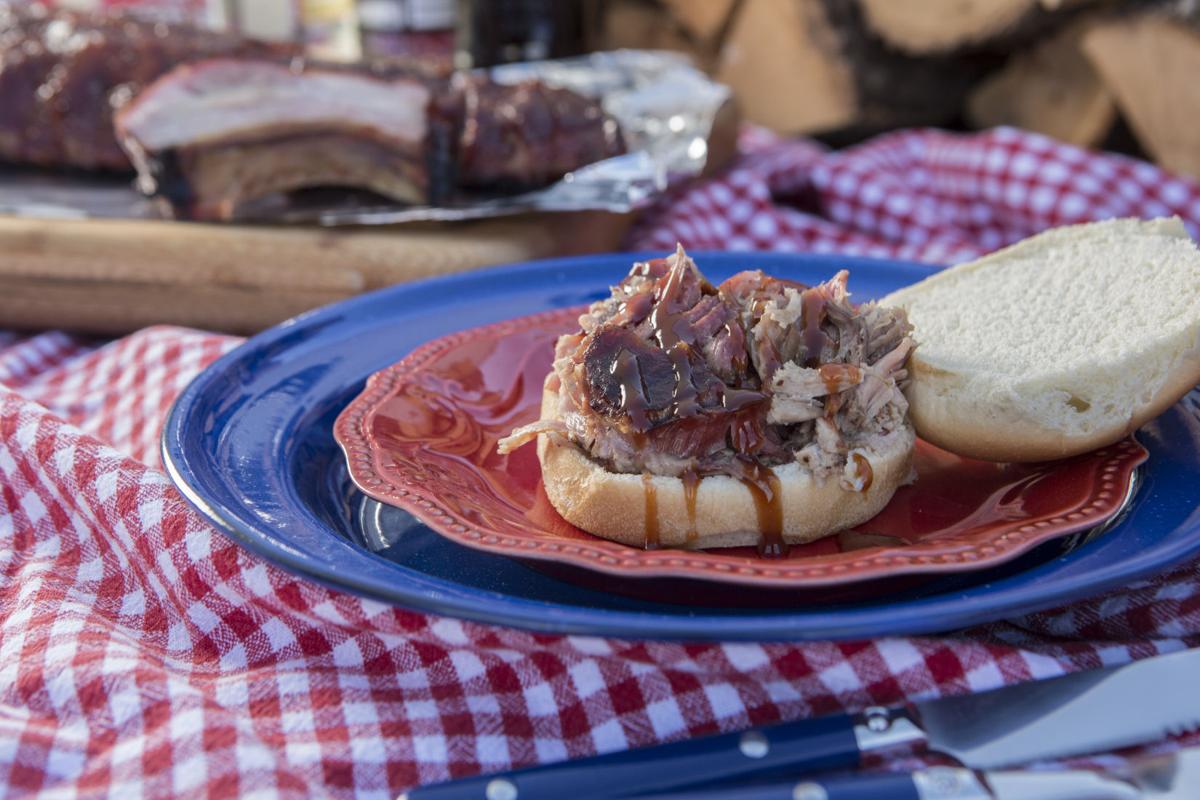 Jerry’s special pulled pork is a much requested award winner. 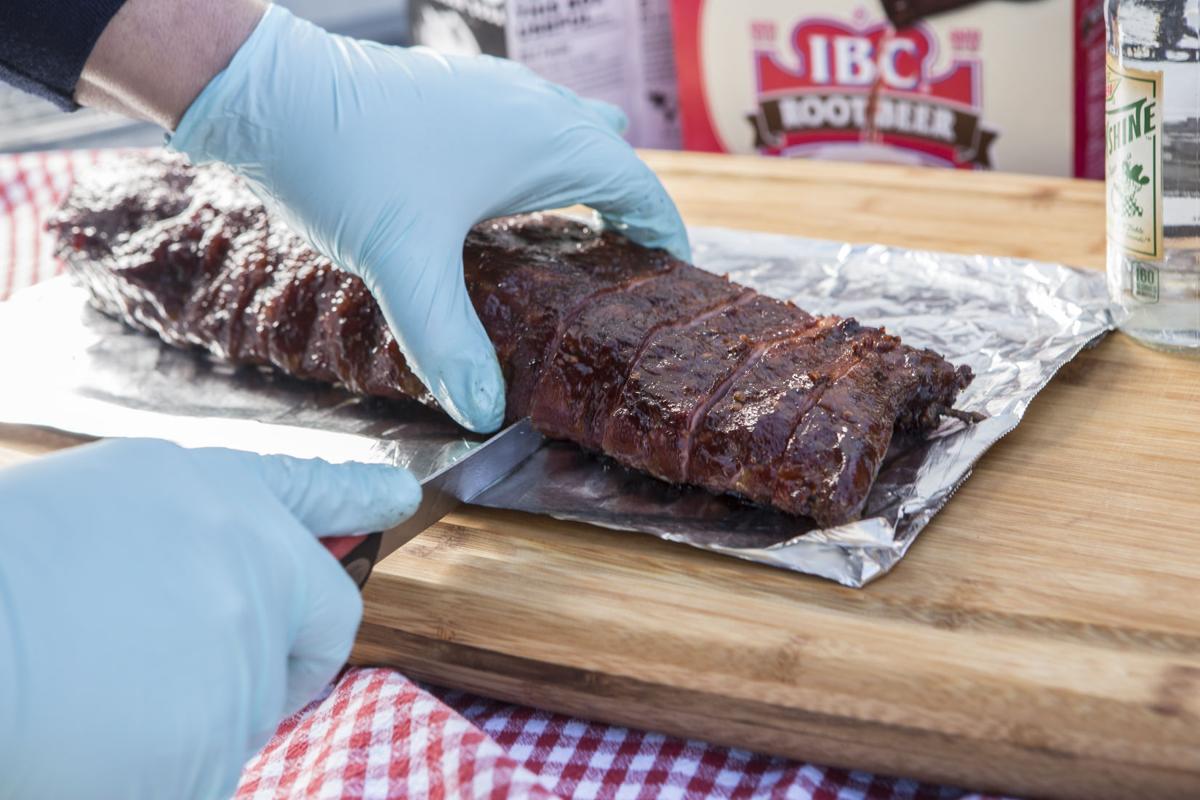 Jerry checks the meat to make sure it remains moist and done to perfection. 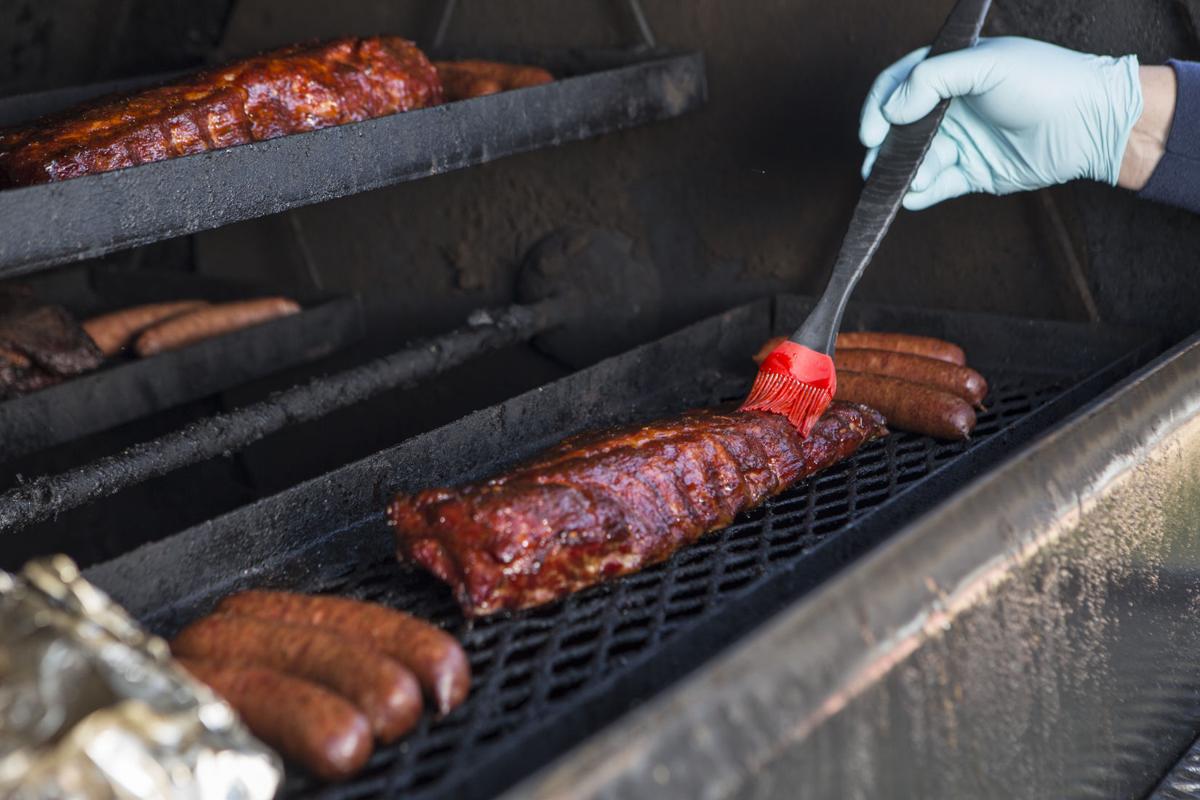 Jerry Taylor reigns over the grill as a colossal barbecue master.

Fellow volunteers Chuck Tinkersley and Charles Urquhart sample the tasty morsels Jerry Taylor produced for the 4-H Pig Show and Jackpot.  Meat for the event was donated by the Oklahoma Pork Council.

A sample of his barbecue will show Jerry Taylor is a colossus of the barbecue grill, with the awards to prove it.

Jerry’s special pulled pork is a much requested award winner.

Jerry checks the meat to make sure it remains moist and done to perfection.

Jerry Taylor volunteers for a variety of activities, but if he ever volunteers to cook for you, it can be a colossal, award-winning deal. Taylor, who works as a life safety technician at EASTAR Health System, has been on their master barbecue team for the annual Exchange Club Chili & BBQ Cook-Off  with his co-cook, Eli Peters, for the last several years. He helps EASTAR consistently win first and second place awards in the open category. His mouth-watering brisket, ribs and pulled pork also take top honors at other competitions, such as the Eufaula Whole Hawg Festival.

Jerry has always liked cooking. His grandfather bought a smoker and Jerry watched him perfect his smoking technique. Today Jerry cooks on a state-of-the-art smoker created by Atwoods Fabrication and Metal that can cost upwards of $3,000. “I like this smoker because it has a rotisserie-style rack that cooks the meat evenly,” Jerry said. “We can get up to 600 pounds of meat in there. We usually do 24 briskets or pork butts at a time.” The result is a tender product that has just the right amount of smoke.

When we caught up with Jerry he was cooking for a 4-H event at the McIntosh County Fairgrounds that promotes youth education in hog showmanship. In fact, Jerry spends a great deal of time at volunteer activities, such as FFA, Eufaula Volunteer Fire Department, Wild Turkey Federation and coaching tee-ball and soccer. His cooking regularly raises funds for various activities, such as the 4-H Shooting Sports Club he started for youth ages 9-19. Funds from the sale of pulled pork sandwiches and other smoked delights help the club travel to state and national competitions. Jerry also coordinates activities with his wife Melanie, who works for the OSU Extension located at the fairgrounds.

Jerry says that cooking is a creative endeavor.

“You start with the basic recipe and add until you’ve got the taste you like,” he said. “No two people will produce barbecue just alike. The seasoning can be changed to suit the desired taste that you are wanting to achieve. I try to change mine out and try new things to see what flavors work well with the meats that I am cooking.” Here he shares the basics of his smoking technique for readers to produce their own tasty morsels using their own unique adaptations of his basic recipes. Note that Jerry does not time the cooking, but rather gauges the doneness by when the meat has reached the desired internal temperature.

Mix all together. Cook over low to medium heat. Bring to a slow boil to let flavors meld, then turn off and let cool. Store in sterilized Mason jars or rebottle in the ketchup bottles using a funnel. Good for up to 3 months stored in the refrigerator. Add spices and ingredients to adjust to your taste.

Season the pork butt with a light coat of kosher salt. Add the dry rub and cover the entire pork butt. Put a light coat of black pepper, the more you put the hotter it will be. Let it sit for at least an hour, I prefer for to sit up to 8 hours.

Have smoker started with the holding temperature around 225-250 degrees. Leave unwrapped for about three hours or until rub is a dark brown color. Wrap up in foil and finish cooking. The pork butt is ready to remove when the internal temperature is at 200 degrees to 210 degrees. At this temperature the meat will be able to be shredded with your hands. Let the meat rest for about an hour before pulling apart.

Season the meat with the dry rub and then add brown sugar. You can leave out the brown sugar if you choose. Sprinkle with a light coat of garlic salt. Let it sit for about 6-8 hours or you can put it the smoker with a cooking temperature of about 250 degrees. Leave unwrapped for the first 3 hours or until dark brown. Wrap in foil and finish cooking to the internal temperature of 200-210 degrees. You may choose to unwrap and cook for another hour if you want a crunchier outside. Let it sit and rest for about an hour, then slice across the grain.

I slice the roll in half long ways. Add a light coat of seasoning that you prefer. Cook for 2 hours at 225 degrees unwrapped. Wrap in foil and cook for 3-4 hours.