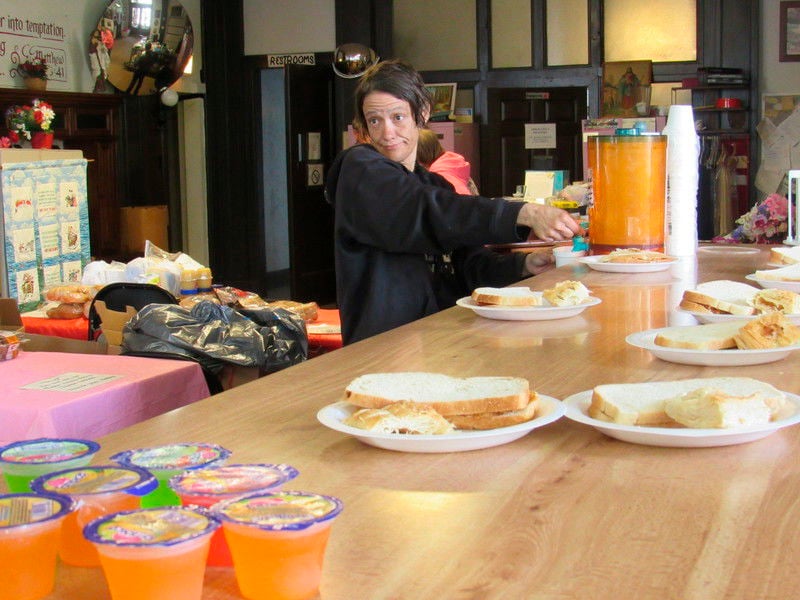 Jessica Rankin fills a drink cup while getting a Tuesday lunch at the Ark of Faith. The Ark limits how many people dine in during the COVID-19 pandemic. 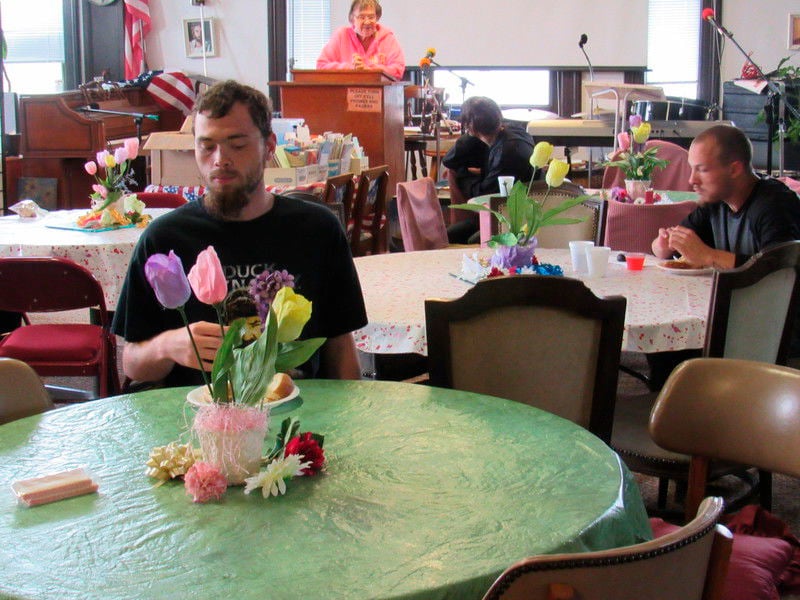 Lunch diners at the Ark of Faith, seated, from left Scott Gray, Jessica Rankin and Shane Walker eat at separate tables to ensure social distancing. Rankin is talking to Ark founder and director Sally Weiesnbach, who is behind the podium.

Diners sit one, maybe two, at each round table during the Ark of Faith's lunch and breakfast.

No more than nine are allowed to eat inside the building out of concern for spreading COVID-19, said Ark founder and director, Sally Weiesnbach.

The Ark, a Christian charity at 401 E. Broadway, has offered free breakfasts and lunches for homeless people on Tuesdays, Wednesdays and Thursdays.

Weiesnbach said the Ark continues to serve the meals, but has been restricting the meals to nine at a time since late February.

A joint resolution by Muskogee County and the City of Muskogee due to COVID-19 concerns, implements social distancing and preventing gatherings of more than 10 people. It also says that "essential businesses" must provide reasonable disinfecting methods, such as availability of hand sanitizer or soap and water, and provide clear signage to alert people of COVID-19 mitigation strategies.

"It makes a lot of sense that they are doing it now," Tucker said, referring to the Ark's restrictions. "The best practice would be to take it and leave, but I understand places where you've got someone who's homeless, you've got nowhere to go. We certainly understand that. Homeless shelters and pantries that feed the homeless are certainly essential businesses."

Weiesnbach said the Ark begins serving up to nine people at 10 a.m.

Weiesnbach said she sits by the entrance to limit how many people come in and to make sure whoever comes in washes their hands. She also has them sign their names.

"I have them wash their hands with soap and water the minute they come in the building," she said. "Then, they can go out and get their breakfast."

After getting their meals from the counter, diners sit at six-foot-round tables.

"You can sit one on each side," she said. "And if you don't pull your chair over to where you are touching, you can sit three at each table."

When diners are finished, they wipe the table and chairs with spray disinfectant, or a tub of bleach water, Weiesnbach said.

"We have them wash the top of their table, so the next one can come in," she said.

She said that before they began limiting access, they'd have twice as many diners.

"Particularly at the end of the month, the place was full," she said, "Probably 40 to 50. They could come and go if they wanted to."

Weiesnbach said she had to make other changes to control spread of COVID-19.

She said she used to have people stand in a circle and hold hands.

Then, she would tell them "this is how God loves us, there's no beginning and no end," she said.

"Well, you can't be separated and hold hands," she said. "Now I say 'atop where you are right now, look to your left, look to your right, we've got to have six feet between us.'"

Concern about COVID-19 also prompted the Ark to temporarily suspend its weekly coffeehouse, as well as classes, such as anger management, deaf signing and veterans' post traumatic stress disorder discussions, she said.

"We had to quit all the classes because our PTSD class had grown so big," she said. "We sit at one place, and it was like shoulder to shoulder."

The Ark continues to offer prayer and counseling by phone or email, she said.