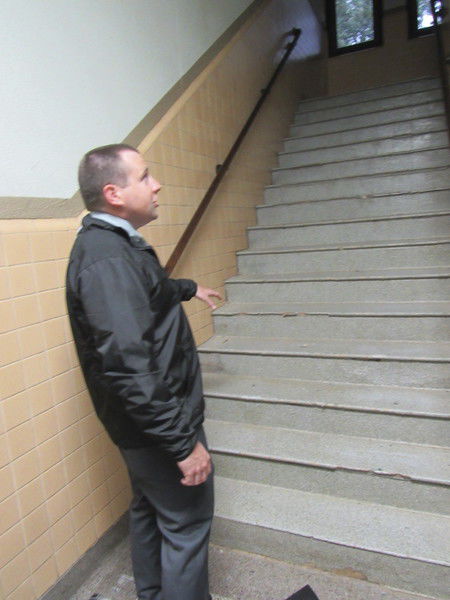 Eric Wells says stairs in Alice Robertson Junior High are too narrow to meet modern building codes. He said they have been covered and re-covered several times. 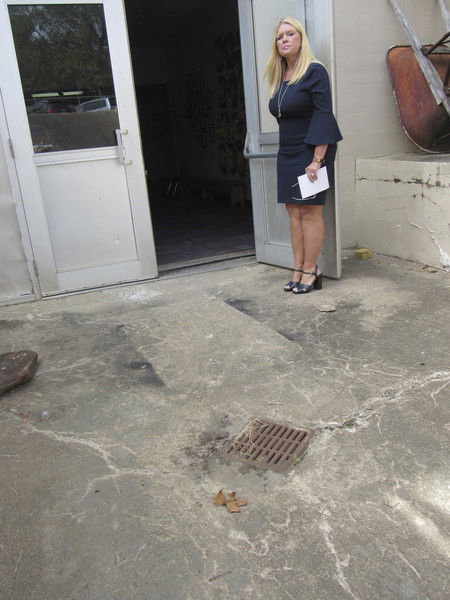 Sadler Arts Academy Principal Ronia Davison points out a drain she said is too small to keep rainwater from flooding the basement. 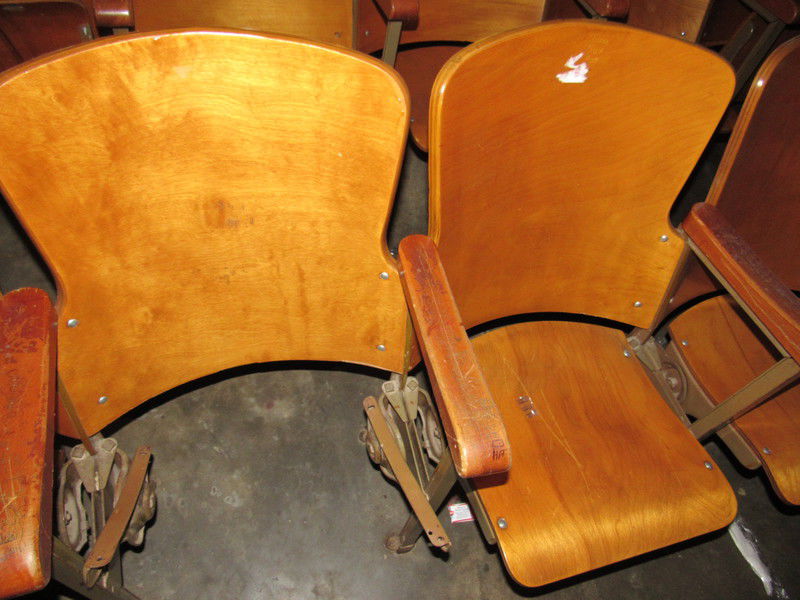 Alice Robertson Junior High Auditorium chairs date to the building's construction in 1939. Some have no seats.

Eric Wells says stairs in Alice Robertson Junior High are too narrow to meet modern building codes. He said they have been covered and re-covered several times.

Sadler Arts Academy Principal Ronia Davison points out a drain she said is too small to keep rainwater from flooding the basement.

Alice Robertson Junior High Auditorium chairs date to the building's construction in 1939. Some have no seats.

With its towering central entrance, Alice Robertson Junior High has been a neighborhood presence for 80 years.

However, school officials say most of the building is no longer fit for students.

"Replacing the building is necessary because the overall structure needs too many repairs, and the maintenance cost on these old systems has become too exorbitant," Muskogee School Superintendent Dr. Jarod Mendenhall said. "The best option is to replace the facility with one that is energy-efficient, environmentally clean, and conducive to teaching and learning for students and staff."

Replacing the original structure is one of several projects included in a proposed $110 million bond package being presented to voters in in the Muskogee Public School District on Oct. 8. If passed, the district's sinking fund millage rate is projected to increase from 20 to 32 mills for about 13 years.

Muskogee school officials say property tax on a $100,000 house would increase by $119.30 a year. Only people with property in the MPS district would be affected.

One bond proposition includes $18 million for demolition of most of AR, rebuilding it into a Freshman Academy that would accommodate up to 500 students. AR students moved to the former Ben Franklin Science Academy, now called the Seventh and Eighth Grade Academy, which is due $2 million in upgrades.

Sadler Arts Academy is due $10 million in improvements, including a seven-classroom addition, more parking and an alumni center for Manual Training High School graduates.

"Energy bills for this building are unreal," Wells said. "We have plumbing issues continually here — that comes with plumbing that's 80 years old."

He said the structure also has problems with heat and moisture, condensation from old pipes makes it look like the ceiling tiles have mold.

"Only 7 percent of AR has fire sprinklers," Wells said.

Widening narrow stairwells leading to the second floor would take up classroom space and would affect structural walls, Wells said. Wooden auditorium chairs are original to 1939 and some have no seats.

Parts of AR that scheduled for preservation include the gymnasium, the band and choir room, and the New Tech Building, which was funded by a 2013 bond issue.

"We were so forward-thinking with the New Tech Building," he said. "We've got ahead of our time as far as energy and efficiency. We have geothermal energy, solar panels and wind. All the hallway lights are powered by renewable energy, which is pretty great."

"Supplies get damaged each time water comes in," Davison said, noting that a small outside drain is too small to catch the water. "Children are displaced from their classrooms while the district extracts the water and dries out the carpeting."

"It's of an age now that it's difficult to find parts, and they oftentimes need to be fabricated," Davison said. "It's not something you can just run out and purchase."

Traffic around the school poses more problems, Davison said. The school is located on a hill north of Arrowhead Mall.

"Parents report often that they have to park at the mall," she said. "During the winter months, that can be a challenge for people to brave the elements to get here — people park in grass, they park in any found spot they can navigate."

Mendenhall said if the bond proposal passes, the district would build a larger parking lot for Sadler. The classroom and alumni center addition would be built on the south end of the school.

"I would anticipate there will be quite a lot of excavation and dirt work needed to allow for construction on this side of the facility," Mendenhall said. "The architects will work with civil engineers to design the proper elevations for the new parking lot, drop-off, pick-up lanes, classroom addition and alumni center."

He said the principal and staff will be involved with Sadler's final design.

Mendenhall said improvements at the Seventh and Eighth Grade Academy include improvements to access and egress to the far west Muskogee school. Other planned improvements would include renovations of the auditorium and football practice field.

At least 85 percent of proposed bond issue would go to these projects:

• Demolition and rebuilding of most of Tony Goetz Elementary: $13 million.

• Acquisition and installation of technology: $5 million.