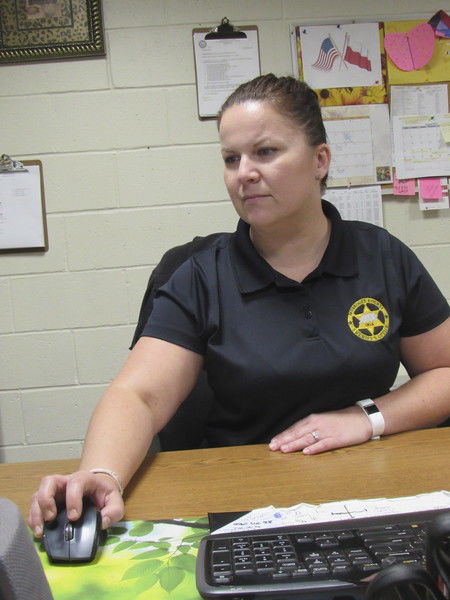 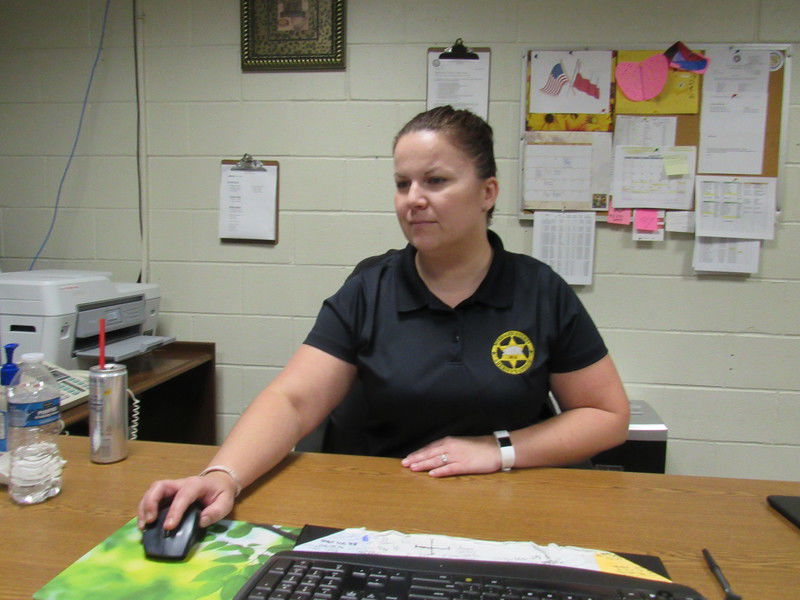 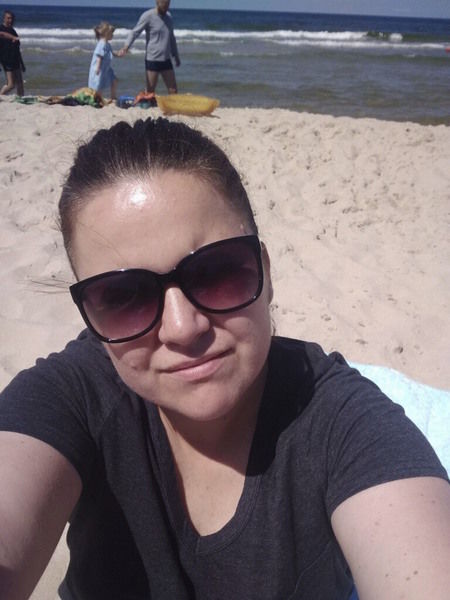 Karolina Boulet takes a selfie by the Baltic Sea during a recent visit to her homeland of Poland. She said she and her family visit every other year. 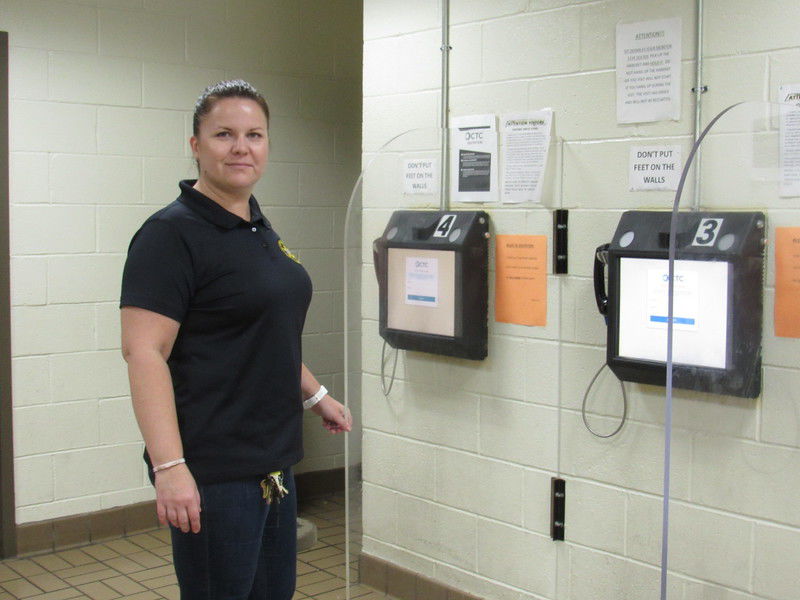 Karolina Boulet walks through the front area of the Muskogee County/City Detention Facility, where she is jail administrator.

Karolina Boulet takes a selfie by the Baltic Sea during a recent visit to her homeland of Poland. She said she and her family visit every other year.

Karolina Boulet walks through the front area of the Muskogee County/City Detention Facility, where she is jail administrator.

One is the Stars and Stripes, the other is the red and white of her Polish homeland.

"I'm proud to be an American and proud to be Polish," she said. "I'm happy because I can keep my Polish citizenship, also."

Boulet, jail administrator at the Muskogee County/City Detention Facility, said the best part of being an American citizen is to be able to vote and use an American passport.

"That helps with the traveling part," she said, adding that she returns to Poland every other year.

The daughter of a warehouse worker and a hair stylist, Boulet recalls as a child wanting to be a teacher.

“In high school, I decided I wanted to work with the public, working in law enforcement, hospitals, fire stations, public transportation — anything including safety,” she said.

Boulet first came to Oklahoma while working on a student visa program in college. She worked at Quad Graphics, a magazine publisher, from July through October for four years. She met her husband in 2008. She moved to the United States to stay in 2009.

"Everything was different for me when I got here, but right now, I love being and living in the U.S.A." she said.

She landed her job with Muskogee County in 2011.

In July 2018, Boulet became an American citizen. She recalled feeling a little apprehensive when she took the citizenship test.

"They provide a study guide, which is a book with over 100 questions for American history, American geography and government," she said. "On the actual test, they ask a few questions from the 100. We have a reading part and a writing part."

She likes taking evening walks a couple times a week at Honor Heights and Civitan parks.

“Usually, it's over the weekend,” she said. “When I take my daughter to the park, usually we walk a little bit, then she's playing."

Karolina Boulet said she found many things unusual about the United States.

"When I first came here, the streets were different," she said. "The highways were much bigger than when I was in Poland, the traffic."

She also had to get used to American food.

"In Poland, we do not have bacon, no sausage and gravy, which for me was new," she said. "We don't have pancakes, but we have crepes. They're really thin. The breakfast part, for me, was very new. But now the breakfast is my favorite part, the food."

Going to large box stores, such as Walmart, also has been an interesting experience, she said.

"They are more outspoken," she said. "Polish people are more formal. Like, when we go to the store, we just say 'hello,' 'good morning' and 'bye.' We don't ask 'how are you.'"

She said one thing she really misses from her homeland is Christmas.

"We celebrate Christmas on the 24, 25 and 26 of December," Boulet said. "On the 24th, we do not eat meat the whole day. We have the main dinners with the family, when we serve the 12 meals with no meat. It's fish, salad, bread and some vegetables and fruits... and soups, we have fish soups and beet soup."

She makes the pierogi dough out of salt, water and flour.

"You can use all different kinds of stuffing," she said. "You can make it with the meat, potatoes and cheese, cream cheese, which is Russian pierogies. Then you can cook with fruit. You can eat savory or more sweet."

"It's potatoes, eggs — all these ingredients have to be cooked — carrots, onions, pickles, salt, pepper, mayo and corn," she said.

Boulet said it's not always easy finding the Polish food she likes best.

"I wish they would open more European stores in Muskogee," she said. "I'm not saying only Polish food, but a bakery. Muskogee needs a real bakery."

Bread is the hardest thing to find.

"The bread we eat in Poland is more like Italian bread. It's firmer," she said, adding that it is not fluffy and light like American bread.

Boulet relies on two Polish friends in Oklahoma City, who shop at a Polish store and international bakery there.

"When I go to Oklahoma City, I buy bread over there and bring it home," she said.

She said she cooks Polish dinners two or three times a week.

"It's not every single day, but it's over the weekend," she said.

Boulet said she faces few hardships in her job as jail administrator.

She began her county work in 2011 as a detention officer. She then became a shift supervisor, then booking supervisor, then office manager and assistant jail administrator before taking her current position.

She described her main task as ensuring everyone's safety.

"Not just the employees, but all the inmates," she said, adding that she currently keeps up with 49 employees and about 280 inmates.

"I supervise and double check to make sure everything gets put in correctly in the system," she said.

She said she's happiest when she can help an employee or inmate and resolve a problem.

Communication is the key to solving problems, Boulet said.

"If you communicate the right way and you show the respect to the inmates, that's how they're going to respect you," she said. "Respect is the big word, not just for the inmates, but the employees. You give respect, you get respect back."

"We came to Muskogee because my husband's parents were from Muskogee, so I could work on my work visa and green card."

"Muskogee reminds me of my town where I come from, in Poland. I like, I guess, everything. It's a good town to live. It's not too big. It's not too small. It's kind of combined everything together. The lack of the traffic, which I like better than Oklahoma City, and the low cost of living."

"Put in more stores, that's for sure."

WHAT PERSON IN MUSKOGEE DO YOU ADMIRE MOST? WHO HAS HELPED YOU THE MOST?

"My husband's family. They are really good and kind people. They treat everybody fairly and with respect. And of course, I like my co-workers and people who helped me get the position where I am right now."

"Spend time with my family."