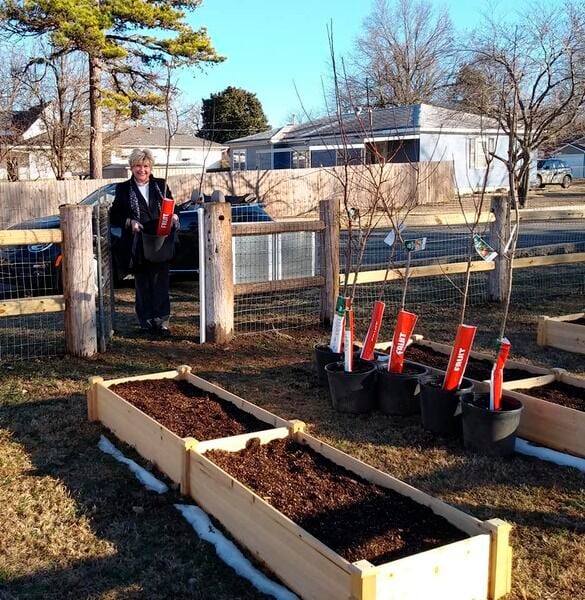 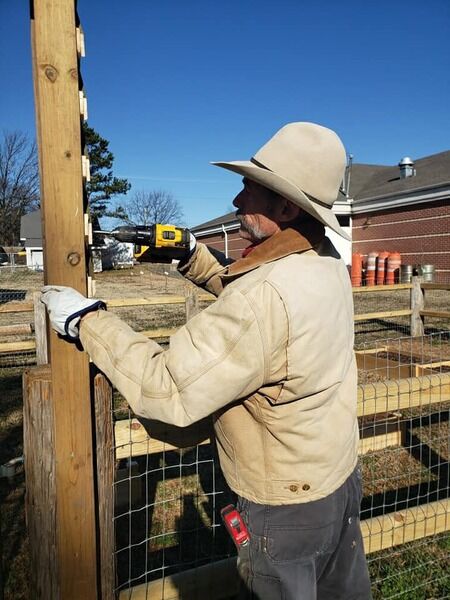 Mark McCullough drills into an arbor over the entrance of Jim Lucas Checotah Public Library's community garden. The arbor is to be covered with hyacinth vines.

Mark McCullough drills into an arbor over the entrance of Jim Lucas Checotah Public Library's community garden. The arbor is to be covered with hyacinth vines.

Checotah gardeners can plant good things to eat at a new community garden at the Jim Lucas Checotah Public Library.

The garden, located south of the library building, will be finished and open to the public within a couple of weeks, said Branch Manager Kathe Smith. It features 16 raised 2-foot by 4-foot beds, each with a container for tomatoes and a window box for spices and herbs.

Smith said the library received a $4,000 Health Literacy Grant from the Oklahoma Department of Libraries. The grant is funded by The Institute of Museum and Library Services, Smith said.

People may apply for a garden bed by calling or coming by the library. A drawing for the 16 plots will be held at a ribbon cutting, 10 a.m. April 2.

About 12 people have signed up so far for the garden beds, so they're going fast, Smith said.

"Parents and children have signed up, and children will learn how to grow fruits and vegetables, that's a real plus," Smith said. "And people will have the opportunity to come together to talk about gardening. It will just be a good socialization."

The garden also has 12 fruit trees — peach, apple and pear. Library staff will tend to the trees and offer the fruit to the public, Smith said.

Muskogee Parks and Recreation, which has offered community gardens in Muskogee for several years, shared information about suggested rules and procedures, Smith said.

"The OSU Extension agent approved of the garden size and plots," Smith said. "They said that for a beginning garden this was a nice size."

The Checotah library received an Institute of Museum and Library Services and Oklahoma Department of Libraries grant in 2020 for a StoryWalk along the Checotah Fitness Trail.