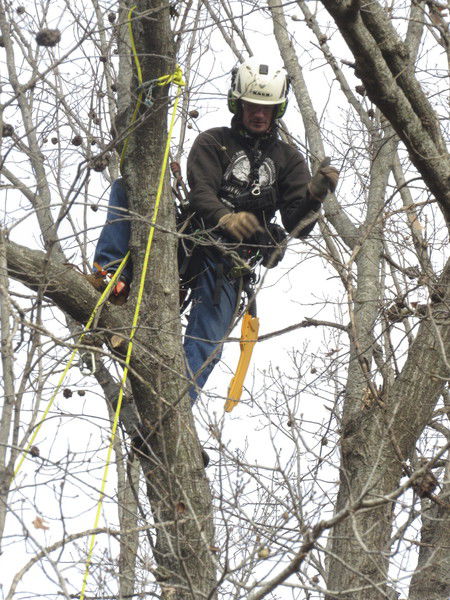 Zach DeCour braces himself while cutting limbs from a tall tree. He said each tree has its own unique challenge. 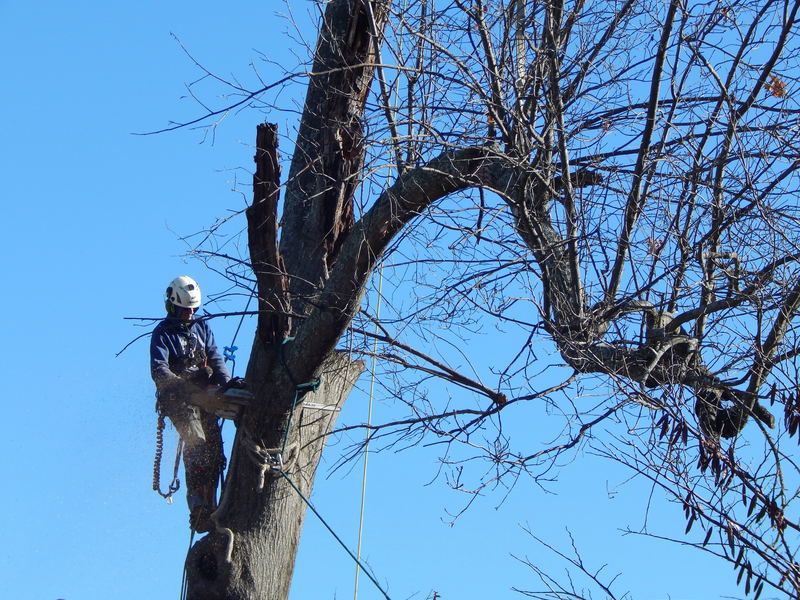 Zach DeCour saws a limb from a giant red oak tree. He said oak trees tend to be strong and dense. 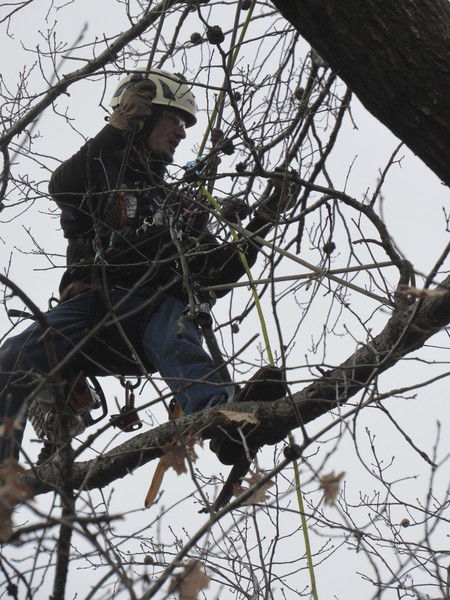 Zach DeCour hangs on to cables and ropes while doing tree work in Muskogee. He said heights do not scare him. 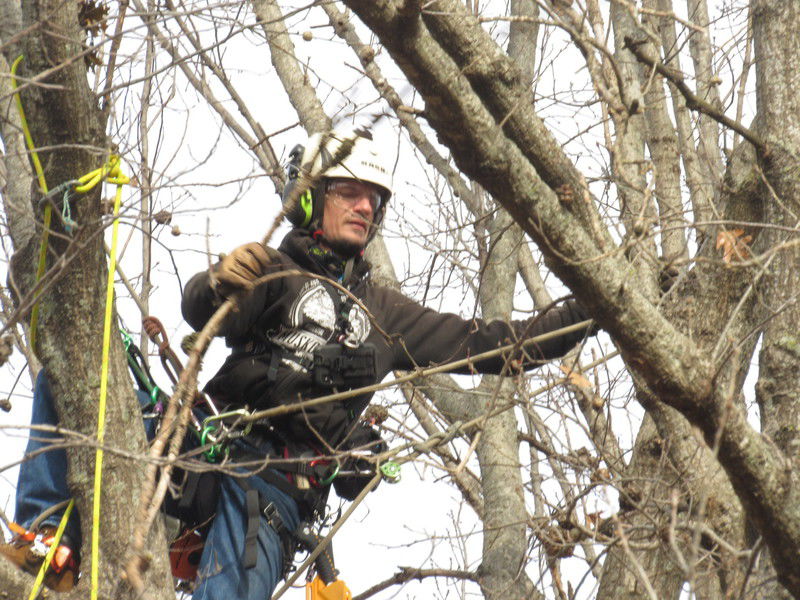 Zach DeCour keeps himself secure while cutting tree limbs. He said trees are not predictably engineered, like towers.

Zach DeCour braces himself while cutting limbs from a tall tree. He said each tree has its own unique challenge.

Zach DeCour saws a limb from a giant red oak tree. He said oak trees tend to be strong and dense.

Zach DeCour hangs on to cables and ropes while doing tree work in Muskogee. He said heights do not scare him.

Zach DeCour keeps himself secure while cutting tree limbs. He said trees are not predictably engineered, like towers.

He recalls climbing trees as a youngster.

He recalls pilots taking him and his father on flights in small planes. He said pilots would let him operate some of the controls.

He recalls sitting in sound booths high in an auditorium, controlling audio for touring bands.

He now climbs trees as part of his job. As co-owner of Muskogee Tree Trimming and Removal, DeCour often climbs trees to cut limbs. He said he began climbing as a profession about 10 years ago.

DeCour spent most of his childhood in Riverside, California. He moved to Muskogee at age 13.

He said he started playing piano "to keep from getting bored" and since has learned to play other instruments. He said he now plays mainly around the house.

His musical interest led him into working audio for area concerts.

One summer, when there wasn't much work, his home air conditioner broke.

"I knew somebody who was a foreman at line clearance company. I said, 'I need a job, and I need it now,'" DeCour recalled. "He said 'show up tomorrow at 5 a.m. with boots on, and I’ll put you to work.'"

He said his first duties included dragging brush and loading it into the wood chipper.

DeCour recalled how he joined his friend and co-worker, Matt Smith, on their tree cutting business.

"We took a leap, bought a couple of saws," he said. "It's not something I expected myself to do, but I fell in love with the work."

The work is time-consuming. DeCour said he plays music, but mainly around the house.

He said he dreams of flying solo, but high costs make that dream elusive.

time in a plane

He said his father would take him flying.

DeCour said he was 8 when he first flew.

"I remember I couldn't reach the rudder pedals, and I couldn't see over the panel," he said. "I could see out my side window, and I could remember the way the plane responded to my control inputs."

He flew several times since then. Planes included a Beechcraft Bonanza, several Cessna 172 planes and a Cessna 162 Skycatcher.

DeCour recalled flying one Bonanza over a lake.

"The pilot pitched the nose down, so now the lake is in front of us, not below us," he said. We were basically a rocket going straight toward the lake. The pilot pulls back on the yoke and pitches up and levels off and we were probably 15 feet above the lake when we leveled off."

"A promoter would put the band at a venue and the venue would call us," he said, adding that he worked concerts in Muskogee, Oklahoma City and Fort Smith, Arkansas.

"I would set up the sound system, the PA. I would test it, see if it worked," he said. "At the end of the show, I'd tear it all down and load it up, take it back to the shop."

He sometimes did sound mixing at events.

DeCour said his most memorable concert was with the rhythm and blues group Tower of Power.

"I've been into them for a long time," he said. "When I found out they were on my schedule, I about jumped through the roof."

The show also included the funk band War and the comic duo Cheech and Chong. Each act had its own sound requirement.

"It was busy," he said. "There were portions of the show where elements of the two bands (Tower of Power and War) would play together. We would have to combine the two requirements to make that work."

Cheech and Chong told their jokes and performed with Tower of Power.

DeCour said he's not afraid to go high into a tree.

"You're essentially hanging from something," he said. "You don't know if there's rot inside the wood. There's a lot you can't see."

Trees can be tall, have a broad stump or have a massive canopy.

"The most challenging are trees that are really big and extremely dead," he said, recalling one huge oak tree that was hanging over a house.

"That was challenging just for the fact it was structurally compromised," he said. "The tree was extremely dead, so we had to be very careful how we loaded each limb so it wouldn't break and fall through the roof."

DeCour said that job took a crane and "a lot of seat-of-the-pants planning."

Crane work involves knowing just where to hook the crane to the limb, "so it doesn't move much once the cut is made," he said.

Workers also must decide on the type of the cut.

"You don't just cut all the way through," he said. "There are different types of cuts you make to get the limb to do what you want it to do."

"My parents divorced. My family is from here, so I came here with my mom."

"What I would like to see is more interest in music. I think there is some, but I would like to see more of that. More variety, more people interested in going out and seeing shows and supporting local music. I'd like to see the Muskogee music scene thrive more than it is. I know a lot of musicians. A lot of them struggle. It's hard to be a musician in a small town like this."

"The most memorable thing would be the airshows out at Davis Field. I'm just into aviation. If I could be surrounded by airplanes and jet noise, I'm happy."

"The easy answer is sleep. This job is hard work, so usually in my spare time, I'm trying to relax or I'm working on equipment."

HOBBIES: "Right now, I work so much, I don't really have time for hobbies, but if the time were there, definitely aviation. I'd probably play music more. I don't know why I chose expensive hobbies."