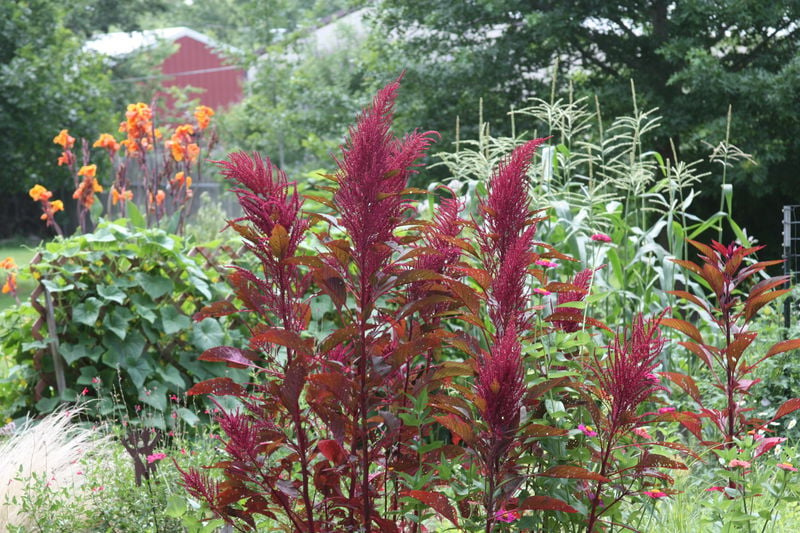 Enjoy how grand Amaranth is when placed with corn and cucumbers on a trellis and orange Canna Lilies. 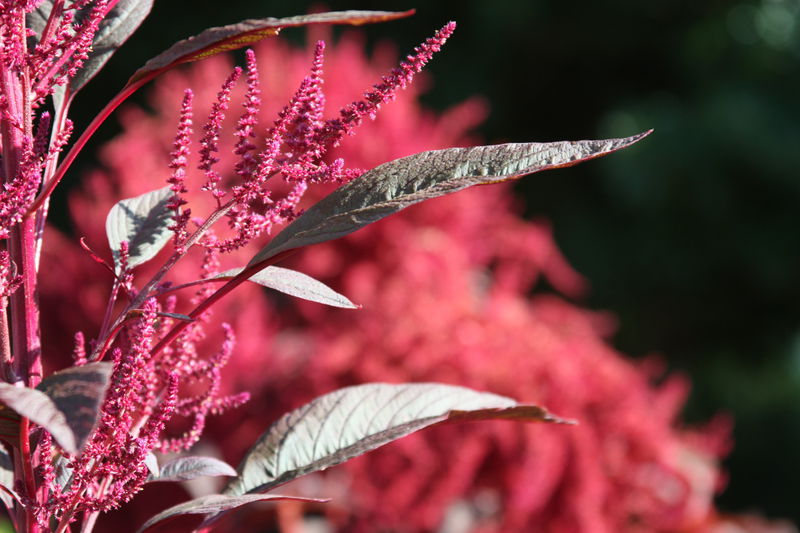 Amaranth is an ancient tropical plant that has a place in our summer garden every year. The tall varieties contribute architectural interest to a couple of large beds.

Amaranth’s history began in India, Mexico and South America, and its spinach-like leaves are still eaten worldwide. Because of their high value, 200,000 bushels of seed were required in payment by the Aztecs to Montezuma for their annual taxes.

Amaranth leaves are rich in calcium, iron, vitamins A and C and are added to soups and salads. The seeds are commonly used as a high-fiber protein source; and, when cooked, the seeds are 90% digestible.

Amaranth is a gluten-free seed rather than a grain and is considered a super-food. In the US, the seeds are used in bread, casseroles, as a rice-like side dish, popped and sprouted for salads.

Some Amaranths grow 6 feet tall with plumes of tiny seeds. To grow it, direct sow the seeds in the soil or start them early indoors for warm-weather (65-degree soil) transplanting into the garden.

The Red Garnet Amaranth in our garden has re-seeded itself annually for 10 years. In the spring, we simply thin the extras and move a few where they can show off their beauty.

Amaranth is fairly easily grown from a package of seeds, but it rarely appears in garden centers as plants. Start the tiny seeds indoors in early spring in clean containers filled with sterile planting mix. Adding a little sand or vermiculite would help with the clean drainage they need.

The Asian varieties, such as All Red, Red Beauty, Red Garnet, Red Leaf and White Leaf are available from Kitazawaseed.com, a company I’ve used several times. Kitazawa has many other interesting Asian vegetables worth considering for next year‘s garden.