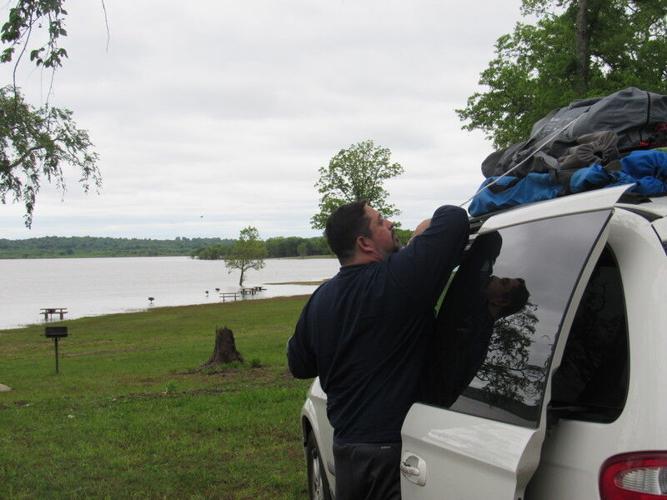 Juan Galaviz of Houston unties gear from atop his sport utility vehicle as he prepares the family campsite at Sequoyah Bay State Park. He said the Fort Gibson Lake level is high this year. 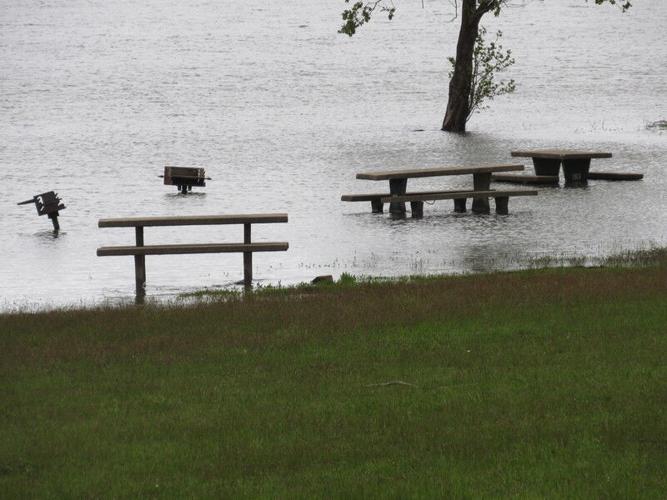 Juan Galaviz of Houston unties gear from atop his sport utility vehicle as he prepares the family campsite at Sequoyah Bay State Park. He said the Fort Gibson Lake level is high this year.

"The water is way higher than what we expected," he said. "In previous years when it rained, it would flood —give it a week or two and it recedes," but "this time, it's been raining continuously."

Galaviz said he brought his family up from Houston to camp at Fort Gibson Lake, just as he had in the past. He said the family planned to set up at Sequoyah Bay on Wednesday, "but the weather wasn't cooperating."

Meteorologists expect the weather to be more cooperative Memorial Day weekend. The AccuWeather forecast for Muskogee calls for temperatures in the mid-80s and mostly sunny skies Saturday, Sunday and Monday.

However, a rainy May pushed area lake levels higher than normal. According to the AccuWeather almanac for Muskogee, 11.44 inches of precipitation fell on Muskogee during the first 24 days of May — average rainfall totals for that period is 4.16 inches at Muskogee.

U.S. Army Corps of Engineers data published Thursday show the Fort Gibson Lake level was 562.3 feet, which is 11.3 feet above normal. At Sequoyah Bay, water had risen to the height of the seats at some lakeside picnic tables.

Abnormally high lake levels can be a deterrent for some holiday revelers. That can put a damper on businesses that rely on tourists who visit area attractions.

"If the lake is up, it affects our lake businesses, for sure," said Kristen Mallett, executive director of Wagoner Chamber of Commerce. "If people can't get their boat in the water, they're going to try to go to a different lake."

"We rely heavily on the lake for our local economy," she said. "Sequoyah State Park is closer to Wagoner than it is to Hulbert or Tahlequah so, more than likely, they will grab their groceries and camping supplies before they came to town — they're going to go to our local Walmart and shop our local businesses for what they need."

"Last year, we saw about 10,000 people come over the three days," she said about Summerfest. "It will definitely bring people here."

Eufaula City Manager Jeb Jones said lake levels absolutely affect businesses in his community. Regardless of an elevation on Thursday as high as 587.4 feet — 22 feet above normal — Jones said the lake level at Eufaula looks good.

"If they are not over the roads we have around the lake, the lake level is not an issue for us because in Eufaula, we have boat docks accessible even when the water is up," he said. "I don't think it's going to deter our visitors."

"We're doing rafts for sure, right now," she said on Thursday. "And I feel confident we'll probably be doing kayaking by the weekend, but we'll have to wait and see."

U.S. Geological Service gauges reported Thursday by the National Weather Service in Tulsa show the Illinois River level of 7.4 feet at Tahlequah. Forecasts for the scenic river show it will rise to a level of 7.8 feet on Friday with flows of 3,000 cfs before falling through the holiday weekend.

"It's not going to hold at 7 feet unless we get more rain," Peyton said.

Lake Levels, as of Thursday