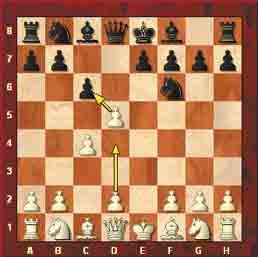 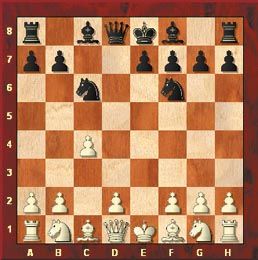 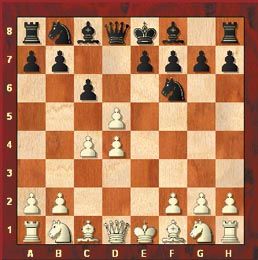 (See Diagram 1) This week’s problem tests your understanding of opening principles. You may chose between commanding white’s d5 pawn to capture black’s c6 pawn or ordering white’s d2 pawn to march to d4. Neither move immediately wins nor loses. The question is which is the better move and why. Please try and answer this question before reading the following discussion. In chess notation, the board is a grid: the vertical columns are numbered "1" through "8"; the horizontal rows, "a" through "h". Each square on the board is identified by a specific letter and number. For example, if the white pawn at d5 were to capture the black pawn at c6, the notation would be dxc6 (b=bishop, n=knight, q=queen, r=rook, x=take, etc.). At this point we can make four observations about how the opening has unfolded. First, white has an extra pawn. Second, white is at risk of losing this extra pawn because of the pressure exerted by black’s knight, queen, and c6 pawn on white’sd5 pawn. Third, black has sacrificed a pawn to have a slight lead in development, specifically the knight at f6. And fourth, this knight gives black more influence over the four key center squares. The only way for white to maintain its extra pawn is to play dxc6. Black then responds with nxc6. (See Diagram 2) At the price of a pawn black now has a significant lead in development. The two knights combine to control the center. Critically, white’s d2 pawn is backward and weak. That is, white’s “d” pawn cannot advance to d4, because it would be captured by either black’s knight or queen. The inability of white’s central “d” pawn to reach d4 undermines white’s fight for the center. As long as this pawn cannot reach d4, it also cannot reach d5, thereby connecting with white’s “c4" pawn. This makes white’s “d” pawn vulnerable to capture in the long run. In short, dxc6 gives black a dynamic position for a pawn that white will struggle to keep. The better move is to advance the d2 pawn to d4. (See Diagram 3) White’s pawns have amassed in the center, and white’s “d” pawn no longer risks being a backward. Moving the pawn to d4 also indirectly develops white’s dark-squared bishop at c1. This bishop can immediately pressure black’s f6 knight by moving to g5, countering the black’s knight’s influence in the center. Because moving the pawn to d4 tips the balance of power in the center, black can no longer afford to gambit a pawn. Black should therefore respond by capturing white’s d5 pawn with its c6 pawn. White then has several good replies, such as nc3 and nf3. The lesson here is that opening principles are based less on immediate tactical considerations and more on positional considerations that have long term implications.