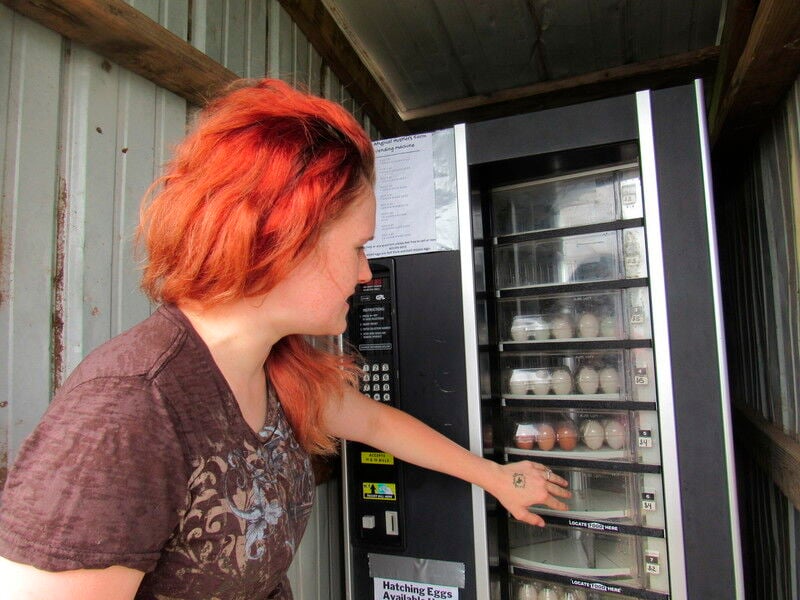 Sarah Gilbert shows how to open a door to get eggs from the vending machine in front of the Gilbert's small farm south of Haskell. 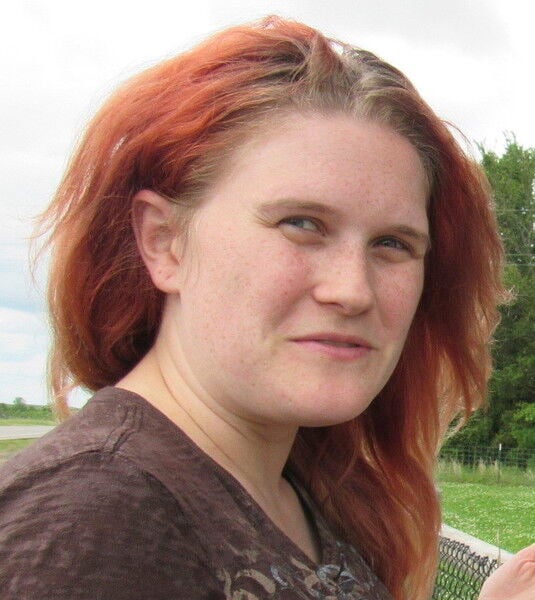 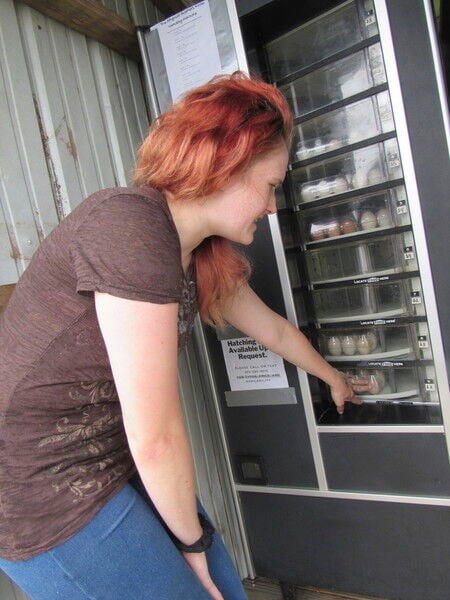 Sarah Gilbert shows how to get the "egg sampler" from the egg vending machine. The sampler contains duck eggs and chicken eggs from differing breeds.

Sarah Gilbert shows how to open a door to get eggs from the vending machine in front of the Gilbert's small farm south of Haskell.

Sarah Gilbert shows how to get the "egg sampler" from the egg vending machine. The sampler contains duck eggs and chicken eggs from differing breeds.

HASKELL — People don't have to risk interrupting the Gilbert family dinner if they want to buy fresh eggs.

The Gilberts have an egg vending machine in front of their small farm, the Atypical Hustlers Farm, south of Haskell.

"That way people can get the eggs at any time," said Sarah Gilbert, who raises chicken, ducks, rabbits and other animals with her husband.

"We couldn't even imagine that it would be this busy," she said. "We've been selling out every single day."

"We just go through them so fast," she said. "It's only been out for two and a half weeks."

The machine sells chicken and duck eggs by the dozen and half dozen. There also are a dozen and half-dozen with both types. There is a price list. Eggs come in white, gray, brown, blue, even green. Gilbert said different duck and chicken breeds lay the different colors.

The Gilberts have had their two-acre farm since January 2020. They raise Cayuga, Ancona and Pekin ducks. Chicken breeds include mosaic, Cemani, Americana and buff leghorns.

"Everybody says the duck eggs are a little bit richer," Sarah Gilbert said. "The duck eggs have a higher vitamin content to them and more vitamin B-12."

Gilbert, who is allergic to chicken eggs, recalled having to search for other types of eggs. She recalled seeing a sign that said "duck eggs for sale."

"But we never wanted to go in and bug people for the duck eggs," she said. "We were like 'wouldn't it be nice if we could just get the eggs at any time without worrying about bothering them, or if they're at dinner.'"

That was when they came up with the vending machine idea.

Setting up refrigeration was the biggest challenge, she said. The machine keeps the eggs refrigerated at 37 to 40 degrees.

The machine is available 24 hours a day.

"We've seen people come by at one o'clock" in the morning, she said.

"When we see a car, we run out and see what's missing and we'll fill it back up," he said.

Since setting up the machine, the couple worked to keep up with the demand.

Sarah Gilbert said they had to double their duck population.

"We have bought more chickens and they're in quarantine right now, making sure nobody's sick," she said. "We're adding to both flocks to help keep up with the demand."

The Gilberts' Atypical Hustlers Farm is about five miles south of Haskell on U.S. 64.