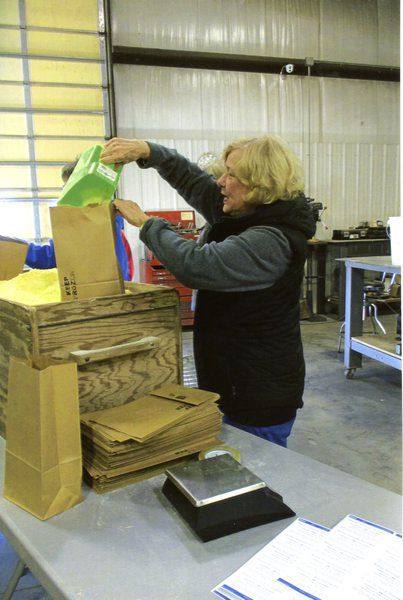 Jan Pearson weighing and supervising the loading of the sacks. 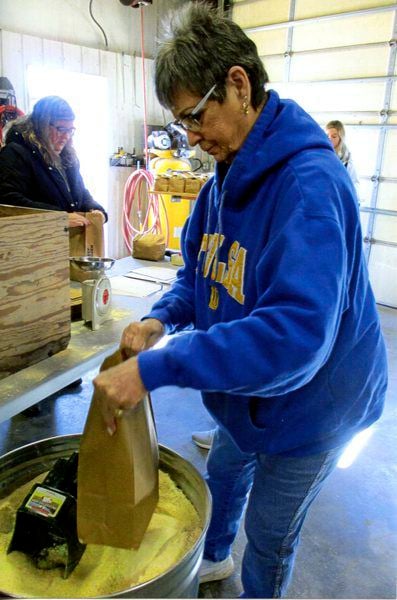 Jan Pearson weighing and supervising the loading of the sacks.

That’s what happened on a chilly Saturday morning in January at this Muskogee County farm that was founded in the late 1920s by Charles Pearson’s parents. The farm has grown considerably since then. Those who showed up either helped with the mechanical grinding machine or stayed inside the warmer barn, packaging the golden yellow ground corn into brown paper bags, headed for area freezers or distribution to friends.

“We ground 100 pounds yesterday,” says Charles’ wife, Jan. As sacks were being filled, other workers kept refilling the ground meal bin, assuring no one ran out of a volunteer job.

This was not just an ordinary farmland workday. “It’s an event,” Jan says. She managed the informal assembly line while busy hands sacked the ground corn. There was plenty of conversation and laughter at this experience as old friends greeted newcomers. Jan explains freezing the corn is necessary. Its high water contact would inspire mildew, rendering it useless for cooking.

Traditionally, this event would be held between Thanksgiving and Christmas.

“It was so wet this year with the flooding, we had to wait,” Jan notes.

The Pearsons’ farm was saved from damage, thanks to two natural terraces that diverted the bulk of the water from their corn fields. “This flood was not as bad as one that occurred in 1943,” Charles said, alluding to his history of the farm since purchasing it in 1975. Not all the corn grown winds up in the grinder, Jan said. A large percentage is used to feed cattle and horses.

With this annual event, the Pearsons have turned what was once a dreaded women’s work chore in early American history into a festive farm/garden occasion. Pioneer women labored grinding corn, using a primitive stone tool — a metate. Filling brown paper sacks with mechanically crushed corn seems an easy modern task that invites fellowship and camaraderie.