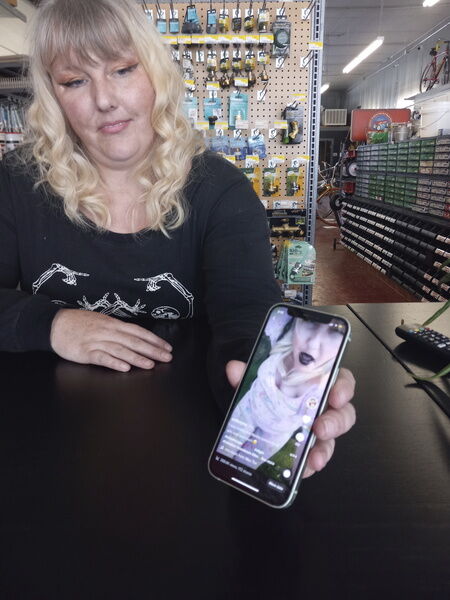 Tiffany Milligan shows one of the video blogs she made for the TikTok social media site. 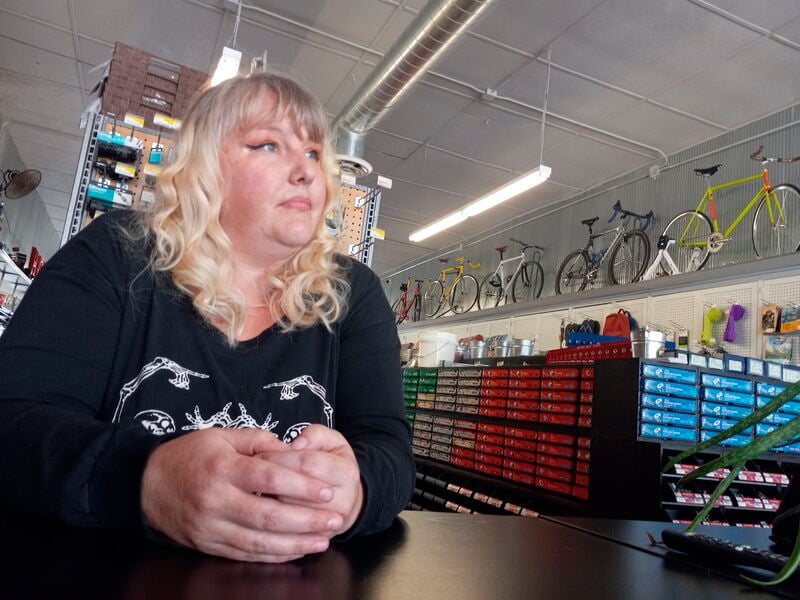 Tiffany Milligan said she and her husband, Ronald Milligan, must find innovative ways to keep the landmark Hoopes Hardware going. Part of that involves a bicycle parts store and repair shop. 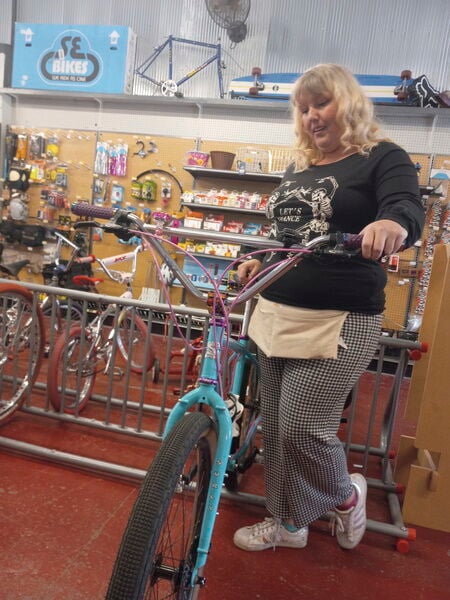 Tiffany Milligan sometimes rides her robin's egg blue bicycle to work at Hoopes Hardware. She said she tries to bicycle when she is not busy at work.

Tiffany Milligan shows one of the video blogs she made for the TikTok social media site.

Tiffany Milligan said she and her husband, Ronald Milligan, must find innovative ways to keep the landmark Hoopes Hardware going. Part of that involves a bicycle parts store and repair shop.

Tiffany Milligan sometimes rides her robin's egg blue bicycle to work at Hoopes Hardware. She said she tries to bicycle when she is not busy at work.

Tiffany Milligan knows how to get going, whether it's on wheels, online, at her business or in the community.

"It’s sort of in my DNA," Milligan said. "It's something I’ve been taught all my live to be proactive in your community."

She traces this sense of action and involvement to her grandparents, who operated a chain of 25-cent car washes all over Oklahoma.

Milligan started attending college after graduating from Muskogee High School in 1997. She took time off to raise two sons, then two daughters.

In the meantime, she got interested in riding things with two wheels — motorcycles, mopeds and bicycles.

“I’m trying to teach all the girls in my life to ride two-wheeled somethings,” she said.

Milligan and her husband, Ronald Milligan, now operate a bicycle repair shop at the historic Hoopes Hardware. She said they work hard to keep the hardware store, which dates to 1933, in business.

"It’s just my husband and I who work here, so we just do everything,” Tiffany Milligan said. “It’s almost impossible to compete with big box stores. That’s why we constantly try to be innovative, why we added the bike repair. We have to be constantly changing.”

When Milligan isn’t working or cycling, she likes to do “vlogging,” a combination of videos and blogging. She said one of her daughters got her started on this creative outlet.

"It's considered to be too big for women in general, so it's kind of impressive," she said. "It's one of the biggest motorcycles they make."

She said she's won local motorcycle shows with it, but hasn't ridden it in a while.

"I used to have a pink 'Hello Kitty' chopper that won multiple awards at bike shows," Milligan said. "And some of the guys would get super upset to get beaten by a girl with a pink bike."

Then there's the moped, which Milligan said is a cross between a motorcycle and an electric scooter. She said it's easy to ride.

"Put the key in and just go," she said. "You get on and you just pull the throttle and it goes. You don't have to worry about changing gears or anything like that."

She said she used to ride with the Groove Riders cycling group but has been too busy with the store.

"What we do when we get off work is get on our bikes and ride the trail at least once or twice a week," she said.

Milligan said her videos have had millions of viewers over the years.

Her early YouTube videos, made around 2007, included teaching girls how to ride motorcycles, cooking chili.

"I documented both of my daughters being born at Muskogee Regional Medical Center," she said. "Everything they allowed me to show I documented."

Milligan's videos of a flood on Gibson street (https://www.youtube.com/watch?v=7p8O8plFAeQ) and a massive ice storm are on YouTube.

"You can google 'Tiffanyrox79' and it pops up, videos of me," she said. "And my TikTok is 'tiffanyrox'."

"Then you need to have good content, whether you're solving a problem for someone or telling a joke," she said. "You need good content, eye-catching visuals, good, quality sound. All those things matter."

"Sometimes, you really don't know what's going to go viral and it does," she said, adding that she's gone viral four times.

People can even generate an income through TikTok if they have more than 10,000 subscribers, 100,000 video views within 30 days and adhere to guidelines, she said. "Then you join the creator fund."

Milligan traces her community work to when she was active in Muskogee Area Cycling Group. She recalled being invited to join city leaders Doug Walton and Darla Bennett going to the 2016 National Bike Summit in Washington, D.C.

"This was before the Centennial Trail was there and before the bike lanes were there. All the bike lanes you see on the side of the streets, we were advocating for the money," she said. "We went down to talk to our representatives to let them know how big cycling was here, that there was a scene, but that there was no safe place to ride. When we came back, all those things were accomplished."

She said the conference changed her life.

"When I went there and I saw advocates there advocating for similar things all over the United States, that's really what awakened it in me to make a difference, an important difference," she said.

Milligan said she now seeks to advocate for equality.

"Sometimes they say one person can't change the world, but one person can set an example for another person," she said. "It has to start somewhere. With one candle, you can light up a whole room."

"Born and raised in Muskogee. The reason I stay here is because I love my town, and I see the potential. There's so much potential."

"The people. I have a lot of faith in the people of Muskogee and we can move mountains, if everybody is willing to do that. The sky's the limit here, too. Anyone can come to Muskogee and make something of themselves if they work hard."

"Definitely my grandpa, Carl Gregg. He was in the Army. He was from Konawa originally. He got married to my Nanny and they picked Muskogee to settle. They started a carwash system. They built a house in Bel Air. He was a volunteer at Boulevard. The (Cincinnati Avenue) Bridge has a plaque with his name on it. He was really involved in the community."

"Not too long ago, we had a Super Hero Run, and I remember a lot of people showed up as super heroes. We went out to Honor Heights. I was Wonder Woman. Recently, Symphony in the Park at Honor Heights. The fireworks show they had at that was the most impressive one I've ever seen in my life. Little things like Symphony in the Park are what can make us just as good as Broken Arrow or Fort Smith."

"We're a big small town, which is a good thing."