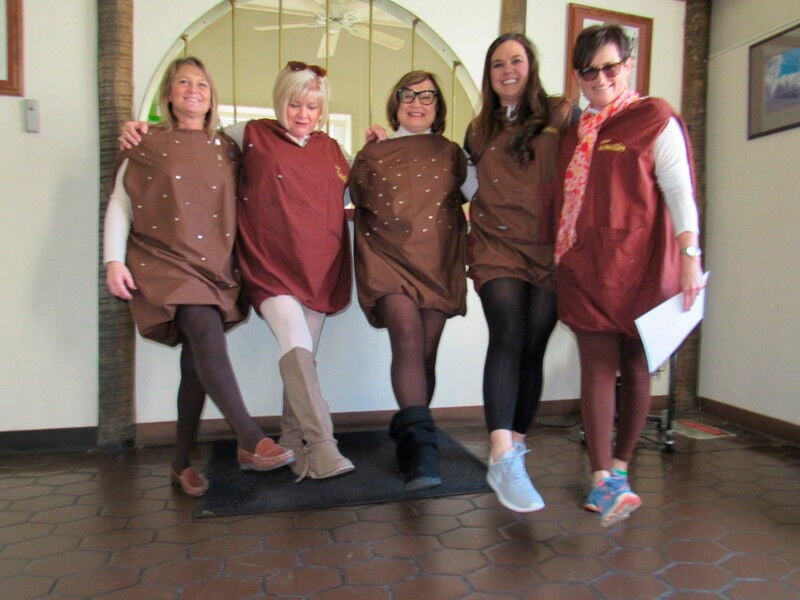 As a member of Real Estate Professionals for 35 years, Shirley Hilton-Flanary, center, has often dressed as a Gassette to promote the club's annual bean dinner. Joining her in 2018 were, from left, Jennifer Taylor, Dena Adams, Brooke Cumbey and Patty Williams. 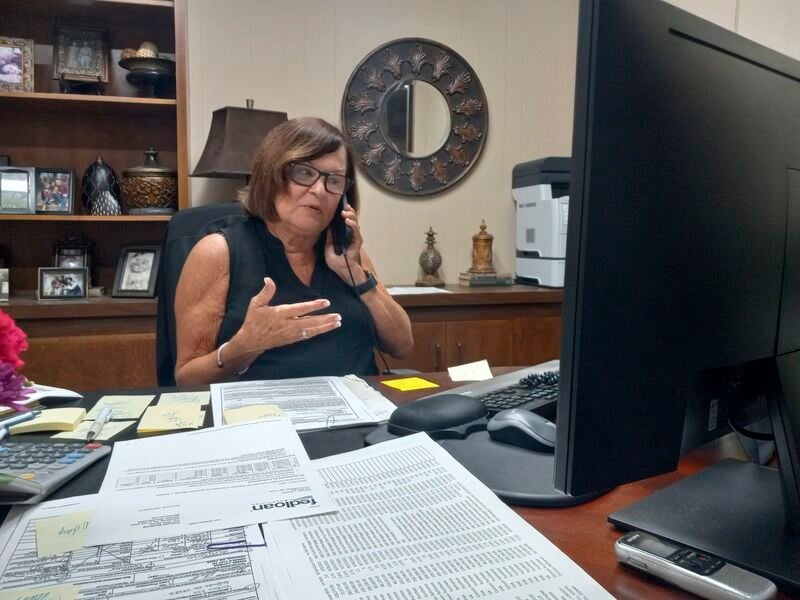 Over the past 49 years, Shirley Hilton-Flanary has spent an uncountable number of hours on the phone helping people with their mortgage loans. 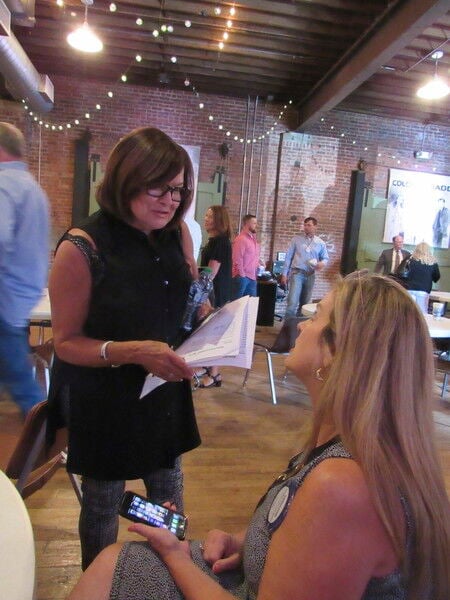 As a member of Real Estate Professionals for 35 years, Shirley Hilton-Flanary, center, has often dressed as a Gassette to promote the club's annual bean dinner. Joining her in 2018 were, from left, Jennifer Taylor, Dena Adams, Brooke Cumbey and Patty Williams.

Over the past 49 years, Shirley Hilton-Flanary has spent an uncountable number of hours on the phone helping people with their mortgage loans.

Ever since she was head cheerleader in 1969, Shirley Hilton-Flanary has known how to get people excited.

The Muskogee native recalled getting the Most School Spirit and being basketball queen and football maid of honor in high school. She recalled dating a high school junior named Robert Flanary, who would become her husband more than 45 years later.

“I didn’t come from great wealth. I came from loving, caring Christian parents,” she said.

Her father owned a downtown cafe and was a Baptist minister. Her mother stayed at home.

Hilton-Flanary said she got into banking 49 years ago “and never went back.”

She said Chris Conley secured her first job at Victor Savings and Loan, located in a brand new building at the corner of York Street and Chandler Road.

“He tried me for a couple of weeks as a teller, and we decided I wasn’t a real good teller,” she said with a slight laugh. “Then he said, ‘Would you like to get into lending or into the savings area?’”

She opted for mortgage lending, a specialty which carried her through jobs at several banks and lenders. She now works at American Bank, located in the same building as her first job.

“I returned to the scene of the crime,” she said.

Over the years, Hilton-Flanary also has made time to sing in the First Baptist Church choir and serve various community organizations.

She has been active in Muskogee Rotary Club and the Exchange Club of Muskogee, as well as the Crime Stoppers Board.

As a member of Real Estate Professionals, she helps promote the annual bean dinner.

“Go around town dressed like a bean,” she said. “I’ve done that for 35 years probably. We started out in trash bags.”

“More than anything, I enjoy helping people with the biggest investment they’re usually going to make,” she said. “And I love helping the first-time homebuyer, they’re so excited about it, buying their first home.”

She said she was told she’d always have to raise the bar in the banking area.

“You don’t want to just do the minimum,” she said. “You want to go above and beyond what is expected. I was never one of those who thought you just do what was mediocre.

Hilton-Flanary said a love of people also kept her going in her profession.

“I love to talk and I love people,” she said. “And, of course, my team of people behind me, they’re important to what I do here. When I changed banks, I brought my team with me. We have stayed together for a long time.”

She said each team member has a role.

Hilton-Flanary said her biggest reward over the years have been “all the different relationships with people of all races and walks of life.”

“Just being a part of their life and part of the experience,” she said. “Their home is their biggest asset. It’s where they break bread. It’s where everything happens.”

Hilton-Flanary considers herself a joiner when it comes to community service.

“When I’m in an organization, I’m not one of those that just likes to sit back,” she said. “I like to be involved. In any organization, whenever there’s an event, out of a couple hundred members, there’s going to be about 12 people who carry it through. I want to be one of those 12.”

Hilton-Flanary said she joined Exchange Club the first year it started. She now serves as one of the Ambassadors for the club’s annual chili cook-off.

“We handle registration, counting all those ballots,” she said.

“I’m usually one of the older people in the clubs I’m involved in,” she said. “That’s one thing about Exchange Club and Rotary. There are people in there who are in their early 20s to — in Rotary, there are people who go up to their 90s. That’s what I love about it.”

“As you get older, being active keeps you young at heart,” she said. “Even if they’re retired, if they just stay involved, it keeps them going. The people who retire and stay home on the couch, they seem old.”

“He was a year younger than me, and I dated him right at the end of my senior year,” she said. “Then I left for OU, so we kind of went our separate ways.”

They married other people and stayed apart for more than 40 years.

Hilton-Flanary said her stepson and his son were best friends. She said Robert’s daughter-in-law hooked him up on Facebook.

“He thought he was sending me a private message, and he asked me out in the public section,” she said. “Everybody was texting me, responding to me. I remember when I got that message, my heart leaped out of my body — and we were neighbors, we both lived on Kimberlea. For 10 years, we were living right by each other.”

They dated a year and a half before he proposed, she said. The wedding was at the Papilion.

“When we got married, we both decided it was very important to have season tickets to Rougher events,” she said.

“I was born here, lived here my whole life. I did live in California and Dover, Delaware, for a short period of time. I was married to a military person. But I always wanted to come back to Muskogee.”

“After living out of state for four years on east and west coasts, I realized one of the things I liked about Muskogee was the friendliness. People didn’t speak to each other in those places. And usually, they could guess where I was from in those places. It’s a great community to raise children. Our cost of living, that’s another thing we have here. We’re surrounded by lakes. I think that’s a big plus.”

“Better streets, and our current mayor is making that a reality. Maybe if we had more places for young people to connect with each other.”

“Two people who have been major in my career, that I’ve looked up to, Burt Baker, who was chairman of the board at Commercial Bank and Duwayne Briley, who was at Armstrong Bank. Those are people who gave me wise advice through my years in banking. Burt was there for me as a younger person, because I was at Commercial Bank for many years. Duwayne always used to say to me, ‘let’s raise the bar.’”

“After being a single mom and being a career person, my son and Robert Flanary’s son, who lived in Wichita, got together and decided they needed to fix Robert and I up. We did get married, and it was amazing.”

“I work a lot of hours, but when you love what you do, you don’t look at it as a negative. I spend a lot of time with my girlfriends going to movies.”

“Perfect size of town where most people are familiar with each other. We’re surrounded by lakes. I have always been proud of our school system.”