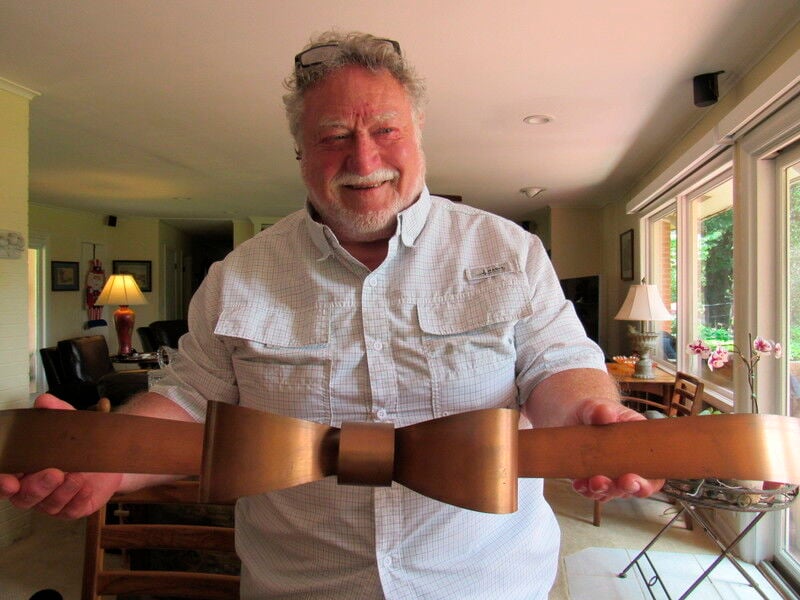 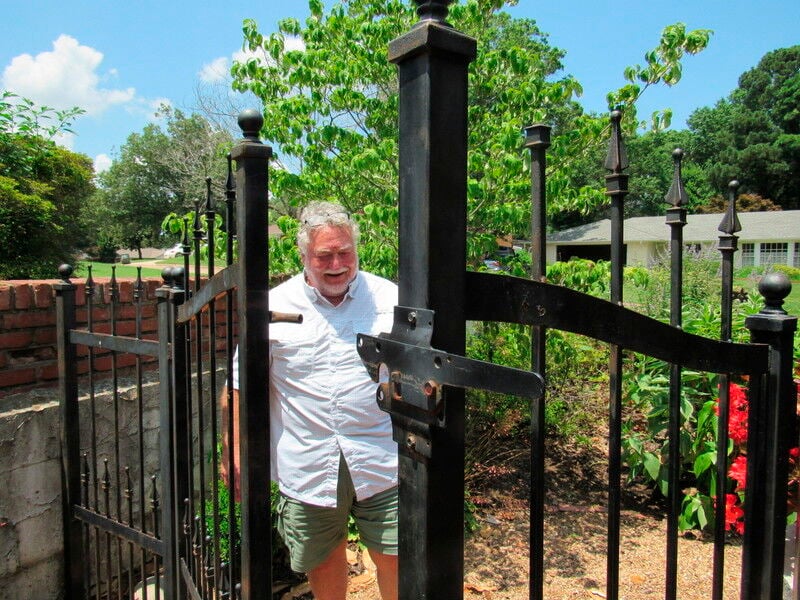 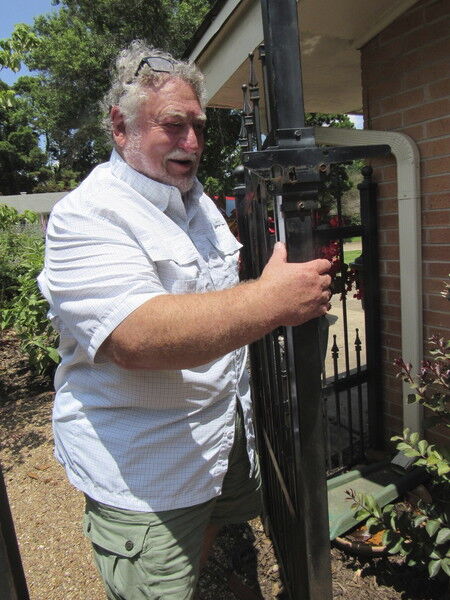 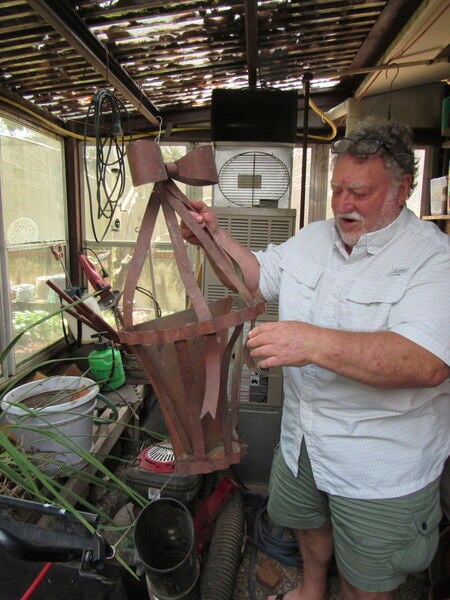 Johnny Broome shows some of the work he does with copper. He enjoys making items for friends.

Johnny Broome shows some of the work he does with copper. He enjoys making items for friends.

Johnny Broome keeps the end result in mind when he works on a project, whether it's the family garden or his metalwork.

That commitment began shortly after Broome earned his degree in graphic art at Northeastern State University. He got a job at Zapata Industries, which made bottle caps.

He said a client, Coca-Cola for example, would design the bottle cap they want, and send it to Zapata.

"We'd make a negative of it, we'd go from the film to the big negative to the press plate. That was the end result," he said. "You have to maintain all the press plates. When the printer's done with them, you have to clean them and put them away, reuse them."

After about four or five years at Zapata, Broome got into the heating and air conditioning business. He said he worked with Hix Air Conditioning Service for about 23 years and with other companies and contractors the rest of the time. He said people tend to "rotate a lot" in the business.

During his time on the job, Broome saw how metalwork could be turned into pieces of art.

"When you make metal duct work, you have all the equipment to do it: the shears, the rollers," he said. "Metalwork was a big part with heating and air conditioning."

After he retired from heating and air conditioning two years ago, Broome had more time for metalwork projects requested by friends. Those projects range from chimney caps and copper art pieces.

Broome also manages  to find time for gardening with his wife and fishing with his older brother.

"I go fishing with him a lot when the weather's good and the river's not flooding," he said. "He's taught me a lot about fishing and a lot about the river. — he was raised on the river."

Broome said he's done "absolutely nothing" during the past few months because of a recent back surgery. However, he's gotten healthy enough to travel with his wife to Aspen, Colorado, and start planning a trip to Pennsylvania.

Johnny Broome uses the welders and other machines in his shop to make things more decorative than duct work.

People say he is skilled enough to copy most metalwork he sees.

"There's kind of a joke that when somebody sees something they say, 'Johnny can build that,'" Broome said. "I kind of reconstruct things I see."

He has built a pair of steel benches for Blossom's Garden Center, as well as copper bows for friends. He said the biggest thing he designed and constructed was a backyard pergola. His inspiration for that project was found at city bus stops.

"I usually have an idea of what I want it to look like," he said. "I take inspiration from other things."

He forms most of the sheet metal in his shop.

"Copper is a lot easier to scratch. Copper is a real soft metal, you have to be real careful with it, with the dents and scratches," he said. "Steel is a lot more forgiving."

Broome said the best part of his work is the end result.

"I like the accomplishment of doing it," he said.

Toiling in the soil

Broome also enjoys spending time with his lawn and flower gardens. It's a task he shares with his wife, Glenda, who got him into gardening about 20 years ago.

He said they plant in lots of flower beds and pots. This year, most flowers have been in pots.

However, he said he cannot choose a favorite flower.

"We have a mix — we have a lot of hydrangeas, and we buy a lot of perennials," Broome said. "We generally buy at Blossom's and Lowe's."

As with his metal work, Broome is happiest when he finishes and sees what's been accomplished..

“I may gripe when I'm doing it, but I like the end result,” he said.

“You put stuff in the ground and it grows or it doesn't,” he said. “You do have to water it, and you do have to feed it.”

Broome savors the time he spends fishing with his older brother, Lewis McBride, who is 17 years older than Broome.

He said McBride grew up fishing in the Arkansas River.

"He was grown — already out of the house, in the Navy — by the time I came along, so we would only see him when he came back to visit or come back on leave," he said. "After he got back from the Navy, he was superintendent out at the sewer plant. He retired from that job and got a consulting job."

Broome said he and his brother have been fishing together for the past four or five years, often two or three times a week.

"He would probably rather do that than eat," Broome said.

McBride also talked about his time in the Navy, living in such places as the Philippines, Florida and California, he said.

The two sometimes spend all day fishing, Broome said. "Sometimes half a day."

"Just depends on if we're catching anything or not, how hot it is," he said. "If we have fish in the freezer, we catch and release."

They fish for crappie and catfish, Broome said, adding that their prime fishing spots along the river go "all the way from the Fort Gibson Dam to Spaniard Creek."

"My real mother was Betty Lou Bingham and she moved to California, had me, divorced, came back to Muskogee. She was a hairdresser here in town for ever and ever."

"I like the small community feel. The fact that everyone here in Muskogee went to one high school is kind of a good thing. If you don't know them, you know of them. It's kind of big enough to get what you want, what you need, but it's not so big you have trouble getting around."

"Some of the retail places that are closed up and gone, you sure wish they had back. You miss the Dillard's and the Best Buy and the Penney's. It's a shame that a lot of the bigger retail places have left. You're left with Walmart. Some of the little shops are nice."

"Years and years ago, when we first started back at church, there was a fellow named Bob Winslow. He was associate pastor at St. Paul. He did —and all the friends we had over the years — have an influence on us. Most of them are church friends. He (Winslow) was just a super nice guy. You really liked the guy."

"The birth of our kids, that would probably be the most. I've done the heat and air for a lot of buildings here in town, that was kind of fun."

"Now that I'm retired, I try to keep up with this yard work. I fish."

"A really laid-back kind of place."

HOBBIES: Tinker around with metalwork, fish, lawn maintenance, gardening, "hanging out with the grandkids."