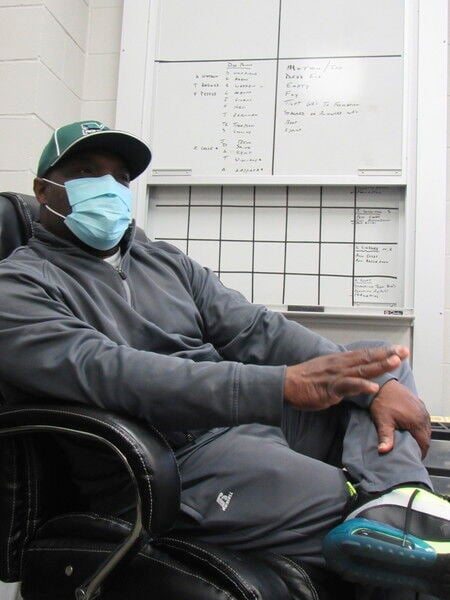 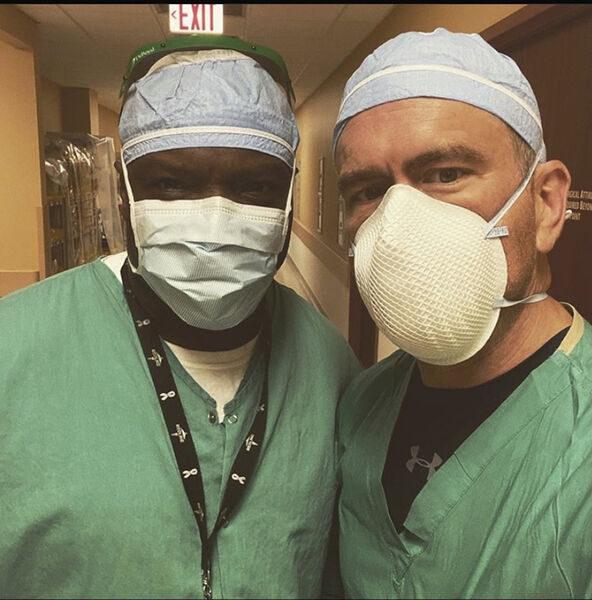 "With her having two sons and three girls, we had a chance to play football in the hallway," he said. "She basically taught us some moves."

He recalled playing "tackle the man" with other youth in his neighborhood.

"We used to take a ball and throw it up, and whoever catches it would run and try to make a touchdown," he said. "Just playing out there as a young kid. That's what helped me."

He said his friends made him a good player in high school. As a running back, Mayes helped lead the Roughers to a national football ranking.

"We motivated each other to be different than what our current situation said," Mayes said. "We all are successful right now, in becoming a great man."

Mayes, 47, seeks to pass his success to others. He and his twin brother, Ron Mayes, have coached youth track teams, which have gone to meets across the United States. He also is a lay coach for the MHS Roughers.

He also has fulfilled his childhood dream of working in health care. He recalled seeing a TV show in which people called doctors to ask questions.

"That intrigued me from the moment I saw it," Mayes recalled.

He said he began thinking seriously about being in medicine when he was in college.

Mayes recalled being introduced to the medical field by working summers at Muskogee Regional Medical Center. He worked the front desk and helped wheel patients to different hospital departments.

"Once I was in there, I got a chance to meet people and establish relationships," he said.

He studied medical technology at the hospital then got certified as a technologist.

He said he doesn't really consider his coaching and hospital work as jobs.

"Basically, everything I do is the stuff I love to do anyway," he said.

Mayes credits  one of his Paul Young youth football league coaches, Stanley Perkins, with leading him into coaching.

"I would come and watch kids playing football, I felt like I would want to do it," he said. "Stanley said, 'Hey, why don't you come and help me coach.' Of course, I love the kids and I thought the world of Stanley. I came to coach and I've been coaching ever since."

Mayes said he coached with the Paul Young league for eight or nine years, then with the Indian Nation League for seven years.

After earning his coaching certification at Bacone College, Mayes coached at Okay High School for three years. He began coaching at Muskogee 10 years ago and now coaches cornerbacks.

"I'm able to slow things down for them so they'll understand," he said. "When I was young, we were able to understand football at an earlier age."

He said good coaches can understand and relate to their players.

"I want to make sure these kids understand that life is going to take you through a lot of twists and turns," he said. "But you've got to be able to persevere, you have to be able to overcome obstacles in life and still make things happen for other people."

Track sets no limits to success

Mayes said working with his twin brother, Ron, on the No Speed Limit track program is awesome.

“We have the same mindset as far as developing kids, introducing kids to something new as far as track and field go,” Don Mayes said. “And we both want to see kids have success in their definition of success."

Youth from ages 6 to 18 begin training three times a week in January. They come from Gore, Warner, Wagoner, Coweta, Stigler and Muskogee. Meets are on Saturdays during the track season.

Teams have gone as far away as Florida, North Carolina and California. At one St. Louis meet, No Speed Limits team members recently got to meet Olympic champion Jackie Joyner-Kersee.

"One thing we establish is family," he said. "We make kids run extra if they don't learn everybody's name."

The team name shows that there's no limit to how fast the youth can go, he said.

"But also we want our kids to realize there is no limit to what you can do and what you can become," he said.

Satisfaction from helping others get well

Mayes has seen technology change in the 24 years he has been a technologist.

He said when he began, "they were just beginning to have laparoscopic surgery."

"Back then, they were doing total knees, measuring," he said. "Now we have navigation that's computerized that helps with precise cuts on total knees."

He said that a woman getting a hysterectomy 24 years ago might stay in the hospital three or four days.

"With the DaVinci robot, you get it done today, you're going home the same day," he said.

Mayes said that working with the surgeon and the robot gives him a feeling of success.

"A person comes into my operating suite with medical problems, and the fact that we are doing a procedure that's going to make them better than they came in," Mayes said. "That is the most satisfying feeling ever."

"Growing up here in Shawnee Heights, Reeves Addition, my environment said, by statistics, that I should be in jail or impoverished. But, because of great men I had growing up, I was able to overcome that. My whole quest now is to be the same for younger kids that the older guys did for me and my brother. To be a part of the community, to be a mentor, to be a beacon of light to people."

"Event centers, as far as family-oriented event centers, where people can have something to do with their families on the weekends and weekdays. Having more things to do that keeps people from going out of town to entertain themselves, even an Incredible Pizza. Muskogee is a family-oriented city."

"A turning point in my life was when, we were living in the projects, and Thomas Hardaway and Ed Ousley said (to his mother) 'you have twins. Get those twins out of the house and let them play football.' They introduced us to sports and that taught us so much."

"Every now and then, I'll play a video game. I'll go to the kids game. My wife and I will have an ice cream social."

"I love the people in Muskogee. I love the sound of Muskogee coming from my lips. I love Muskogee."