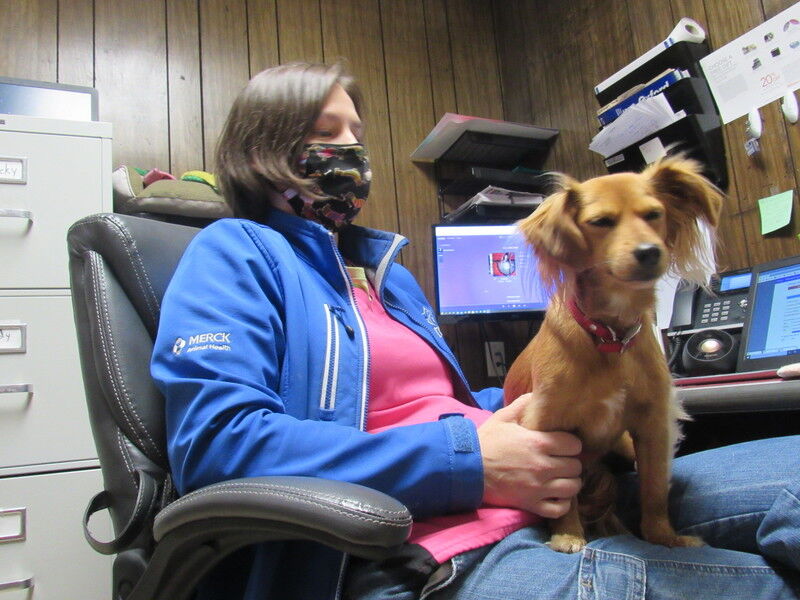 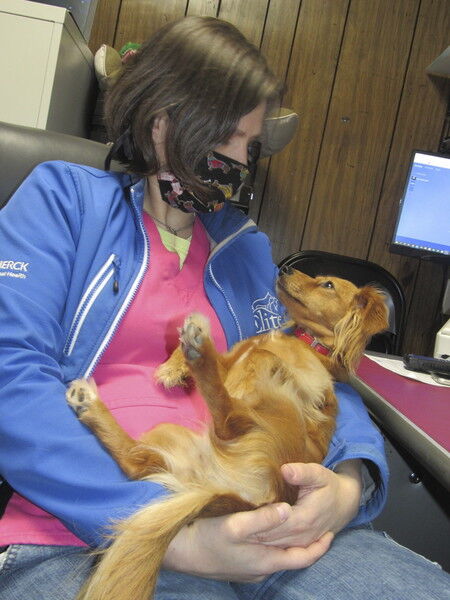 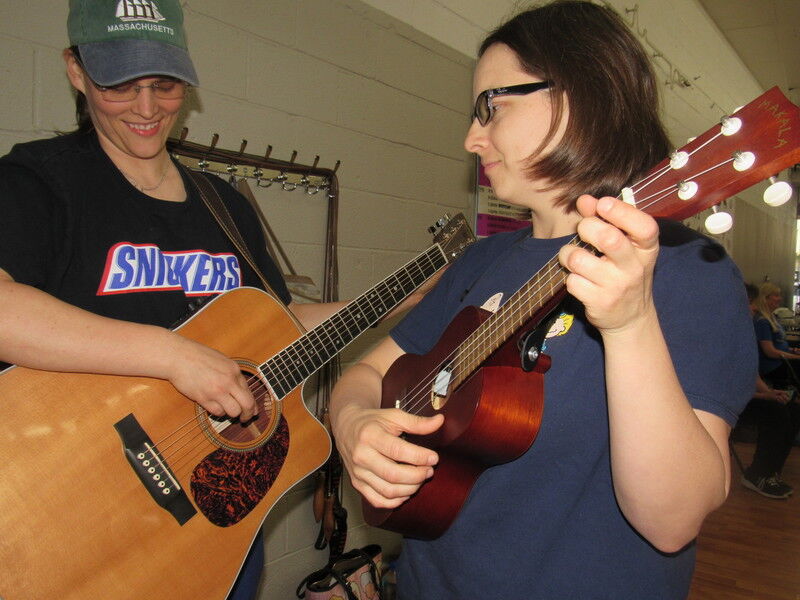 Erin McCawley, left, and Meaghan McCawley practice for the Senior Follies in 2019. They have sung for various events.

Erin McCawley, left, and Meaghan McCawley practice for the Senior Follies in 2019. They have sung for various events.

She thrives on the trust and friendship she develops with animals as well as people.

Part of that camaraderie came while growing up in far western Kansas. She recalled taking family trips with her parents and siblings.

That developed into more singing, especially with her sister.

"As we got older we started to do our own thing with singing and playing guitar," she said.

Erin and Meaghan McCawley have performed together at various events. They also perform with Okiepella, an a capella vocal group.

Erin McCawley developed a rapport with animals through her work at Animal Medical Center. She started there as a veterinary technician, but has since become the practice manager. She has handled beavers, possums, raccoons, owls, hawks as part of her job.

"We have a lady who raises lemurs," McCawley said. "We've epoxied I don't know how many turtle shells. Sometimes they would have a hole in their shell, where the shell has been pulled away."

She has special relationships with her animals. Dave, a basset-great Pyrenees mix, followed her home from a music festival. Rhubarb, a long-haired dachshund mix, came after McCawley lost a previous dog.

McCawley also keeps a gray quarter horse mare named Diamond on some property on 64th Street. She said she likes to ride around the woods and hills of the property, as well as in arenas.

Erin McCawley's dogs seem to have found her at just the right time.

She recalled riding her bike home after helping out at the G-Fest music festival about six years ago.

"Right after I turned on the street where my house is, this puppy started chasing me," she said. "I started pedaling as fast as I could to outrun him. I thought I had finally lost him about two doors down from the house."

Two days later, the dog showed up on the porch, McCawley said. She spent a week looking for potential owners before deciding to keep him and naming him Dave.

"He is what we would call a lovable doofus," she said. "He's really smart, but he just doesn't think things through. When he was a puppy, he'd be sleeping on the couch and his head would be hanging off. Gradually his body would slide off until it's dumped on the floor."

Rhubarb came into McCawley's life a few days after her other dachshund passed away in 2019. She said a co-worker at the clinic does animal rescue and had a long-haired dachshund.

"She said, 'I know it's kind of early, but I think you're going to like this dog.' I thought I wasn't ready, but I held her. We bonded immediately, and I took her home."

"She worms her way into your heart," McCawley said.

McCawley blends well with her sister, Meaghan. The two have performed with the Christmas Home Tour, Senior Follies and Eddie Yadon's Christmas Extravaganza.

"We've always been told that, because of the family dynamic, our voices blend really well," Erin McCawley said. "And the practice we got in the car, having us sing three- or four-part harmonies on various songs has helped us to be real versatile with the harmonies we bring."

She she and her sister are both sopranos.

"She's more comfortable as a soloist," McCawley said. "So, she often sings the lead, and I usually sing harmony, back-up. I also accompany with guitar. She usually plays ukulele."

The women also blend well with their stringed instruments.

"The ukulele gives some of the songs we play kind of a fun, bouncy feel," McCawley said. "Meaghan wrote a song using her ukulele that's really cute, and we got a lot of good feedback on."

They don't limit themselves to a particular genre.

"We do a lot of covers, and we try to adapt them to our style, which I would say is kind of folksy, bluesy," she said. "A couple of people we know said we should shift to country. There are some country songs we perform, but they're not necessarily in the country style."

McCawley got to know Diamond a couple of years before the horse became hers six years ago. She said a friend had gotten Diamond and another horse to ride with her granddaughter.

But the horses proved too frisky, McCawley said, adding that the friend invited her to "gentle the horses up."

"I didn't have hardly any riding experience to speak of," she said. “I took it slow. I taught the horses how to behave, and they taught me how to ride.”

Diamond never did slow down enough to satisfy the woman who owned it.

"Diamond likes to go faster than a walk, but my friend just wanted a horse to walk around on," McCawley said. "By that time, Diamond and I had bonded."

McCawley said the biggest challenge of owning a horse has been unexpected health issues.

"Over the past two years, I haven't been able to ride her a lot," she said. "Last year, she had an injury just above her hoof that took forever to heal. Coming into this year, I was ready to get going, but she had a breathing issue."

She said her favorite part of riding is "just the quiet."

"Same thing as performing with other people," she said. "Just the camaraderie with the horse."

"We moved here when I was in my late teens. We moved here from Colorado about 20 years ago with my parents and my brother and sister. We pretty much have been in this area the whole time."

"The community. People are just real personable and easy to make friends. They're loyal. Another thing I like about Muskogee is the emphasis on the arts. There's lots of good music and talent in Muskogee."

"I don't know. I don't have an answer to that. I'm pretty content here. I've got family, friends, a good work family."

"My sister, Meaghan. She worked at the Chamber of Commerce and she got imbedded into the community that way. People just love her. She's got a great personality. She's very talented. She has a home repair business, mechanically minded. She rebuilt a carburetor when she was 16. She's the one I go to if I have a question about something weird going on with my vehicle."

"I got my horse. All my life, I had wanted a horse and never got one. As an adult, I got the opportunity to get a horse."

"Big enough to have everything you need. Small enough not to get lost in."