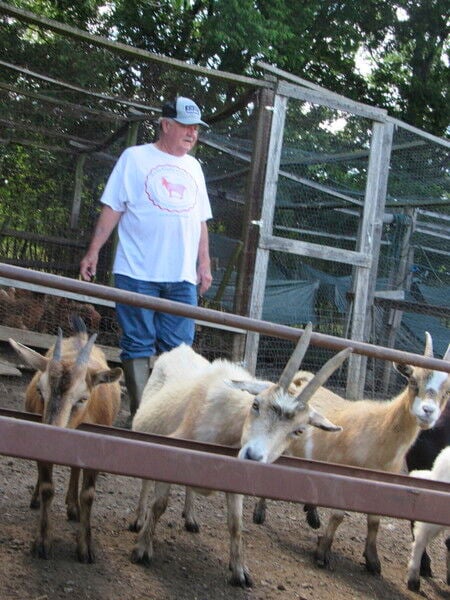 Bill Mocha watches his pygmy goats munch on pellets during Thursday morning feeding time. They flood the fence when they know it's feeding time. 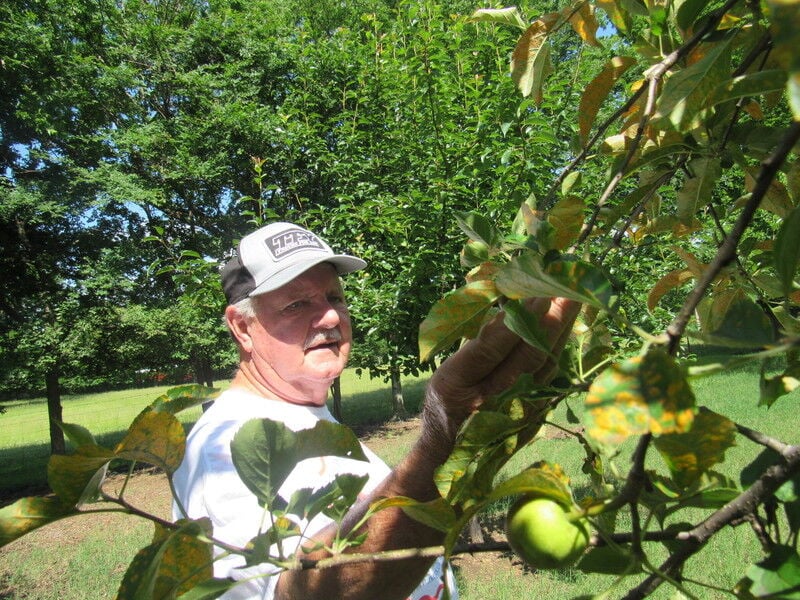 Bill Mocha checks pears on one of his front yard fruit trees. He grows pears, apples and, his favorite, plums. 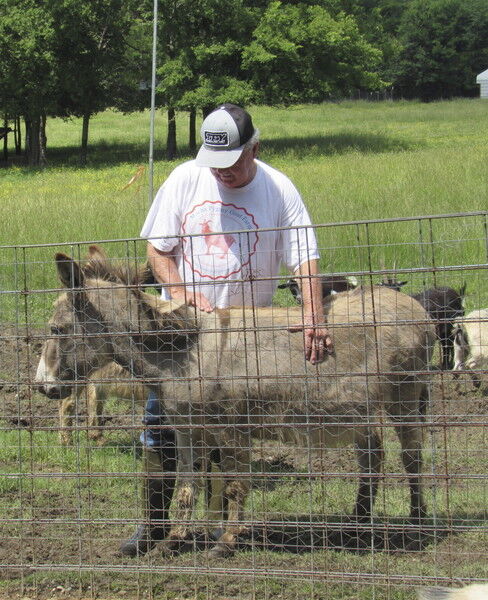 Bill Mocha comforts one of two female donkeys he has on his 20-acre spread east of Muskogee. 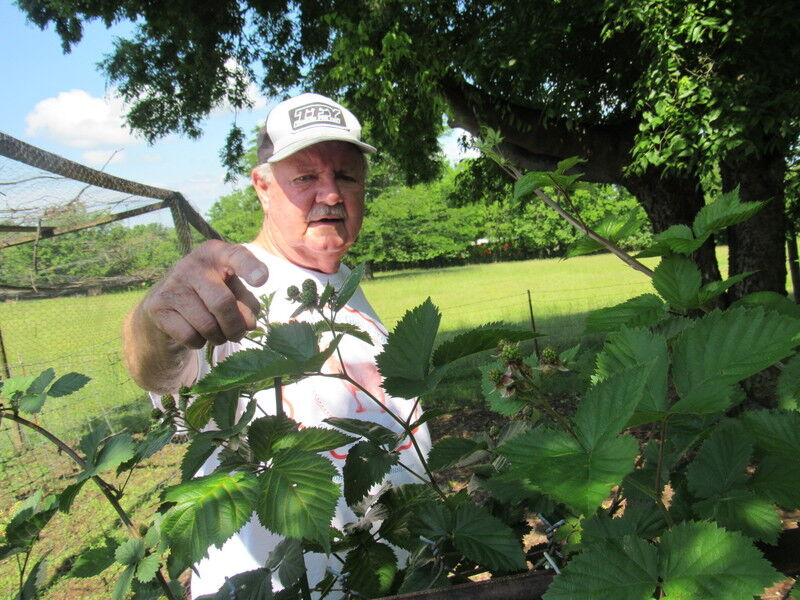 Bill Mocha checks his Arapaho blackberry vines. He said he expects a good crop this month.

Bill Mocha watches his pygmy goats munch on pellets during Thursday morning feeding time. They flood the fence when they know it's feeding time.

Bill Mocha checks pears on one of his front yard fruit trees. He grows pears, apples and, his favorite, plums.

Bill Mocha comforts one of two female donkeys he has on his 20-acre spread east of Muskogee.

Bill Mocha checks his Arapaho blackberry vines. He said he expects a good crop this month.

He recalled trying it in his south Muskogee backyard. Mocha built his house in Grandview Heights in 1975 and reared three daughters.

"After the girls left, the trampoline and swimming pool (above ground) went out, and I started a really nice water pond and arbors," he said. "I had a wooden fence around the yard, had black hedging around the bottom, brought terrapins out there and they’d have babies, about the size of a quarter."

Mocha soon began planting vegetables. He said his wife, Sharon, used to can them and make tomato juice. They lived in the Grandview area for nearly 30 years.

“I ran out of things to do in the backyard,” he said.

They found 20 acres east of Muskogee near Gooseneck Bend.

“For years I’ve been a city boy and always wanted to have a farm. I had relatives that did," Mocha said. "I talked my wife into it. She wasn’t crazy about it."

He said the property has three ponds, included one secluded in cedar trees.

"Some of the grandkids have bow hunting stands in the trees," he said.

"Ducks nest where they want," he said, adding that one nest is in the front hedge, more are by front trees along the driveway.

"The male kind of watches over them," Mocha said.

There are also animals Mocha doesn't raise. He said he sees a lot of deer, bobcats and, unfortunately, coyotes.

"Seven wild geese come in every day, they are out by the pond," he said.

The Mochas have a four-wheel-drive GMC Jimmy they like to drive around.

Mocha, who recently retired from selling automobiles, now has time to tend a vegetable garden, blackberry vines and fruit trees.

to move outside city

"I got tired of the city," he said. "Even though I had good neighbors in the city, my neighbors here are farther away from me. No dogs barking. I don't even have any dogs."

He said his brother lived near Gooseneck Bend, "and it was so beautiful where he lived."

The property wasn't that beautiful when they bought it in 2006.

"This house, it was terrible out here," he said. "It was way overgrown outside. I had to have the whole house painted inside and out. I had new siding. After we got it going and fixed it up, the neighbors would drive by and honk and wave because they were glad it didn't look like it did before."

Mocha began with chickens and guineas. The biggest challenge was keeping the guineas on the property.

"Some of them, before I fixed cages for them, would run out into the street and get run over." Mocha said. "The guineas that I have are pretty smart, they don't go out there."

Just in case, Mocha has a guinea crossing sign by the road.

He raised sheep and big goats before deciding to get pygmy goats about 10 years ago.

Mocha said the most important thing he learned over the years is to keep the brush down to keep the bobcats and coyotes out.

Mocha said he and his wife don't have to be early risers to care for their animals.

"We want to give the chickens time to lay eggs," he said. "If we go too early, they won't lay the eggs that day."

He said his chickens usually lay a lot of eggs, but not lately.

"Right now, the chickens are on strike, so we don’t get them," he said. "I think it's this weather. They’re walking around in mud all the time. They just don’t feel like it."

Mocha said he heads out around 9 a.m. to collect the eggs and feed the animals.

When Mocha spreads feed pellets in a raised trough, dozens of goats come crowding in.

"After we feed, we get in the Jimmy and we drive it around the acreage," he said. "First thing we do is go in the goat barn and see if there are any babies or maybe a dead goat."

They drive around back to check for deer, then they drive along the fences.

"Sometimes the goats get their horns stuck in fence and can't get out," he said. "So I keep a pair of wire cutters on me."

Goats can be a challenge.

"I have to keep their barn cleaned out," he said. "I have to, in the winter, make sure it's warm enough for them. They hate rain. Doesn't make any difference to the donkey and the cow."

Mocha recalled having to add $350 in topsoil to start his vegetable garden eight years ago.

"You can't grow anything out here except rocks," he said.

He also had to clear a thorny wild blackberry patch, which covered a huge satellite dish.

"My arms were shreds when I got through," he said.

He is surrounding his garden with chicken wire, even on top, to keep the possums and birds away.

"I didn't plant anything until about two weeks ago," he said. "It was probably a good thing because so many people lost produce in that hard freeze we had."

He said he grows enough vegetables to keep the family fed. He'd like to grow enough to give to others.

Mocha said he grows the fruit trees in front to keep the wildlife away from the fruit. He grows Granny Smith apples, which his wife uses for pie.

"My dad worked for Swift & Co., and he was transferred to Muskogee. I just loved it, especially where we are now."

"Bring in more industry and jobs. I'd like to see the price of corn go down, because of the feed. I wish they'd quit using ethanol in gas, that's where the corn goes."

"Terry Miller and Andy Ewing. They both owned car dealerships, and they both treated me very fairly and made sure I made a good living. If anyone ever says a bad word about any one of them, there's something wrong with that person."

"I got run over by a tractor once. I had to be Life Flighted to Tulsa, but was out of the hospital the next day."

"I go to my grandson's ball games. That's the main thing. My wife and I have a glass of wine in the evening and visit, talk about the day's happenings. She still works part time."

"It's a place where you can go to have a little farm like me and really enjoy it. You can retire here."

Mocha finds his paradise outside city

Mocha finds his paradise outside city