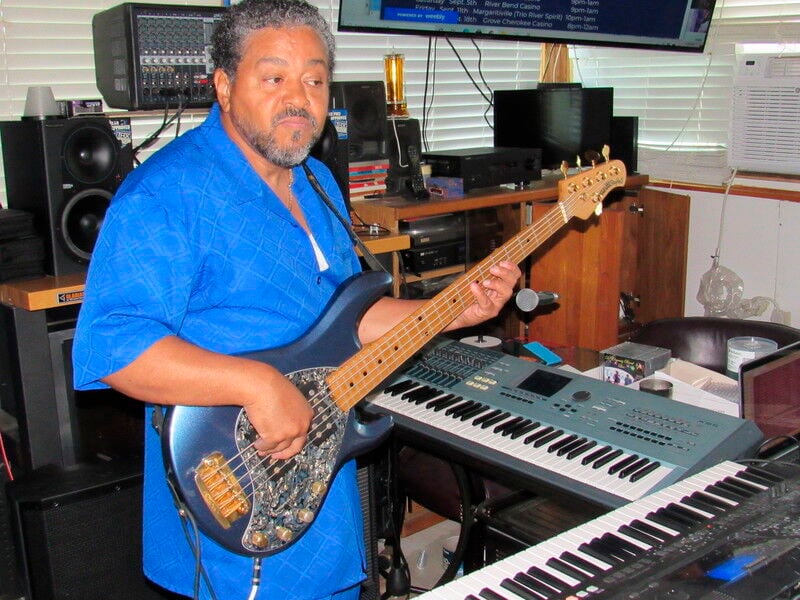 Kenneth Diggs plays a few riffs of "Play that Funky Music" on bass. He performs at casinos with "D'Elegantz." 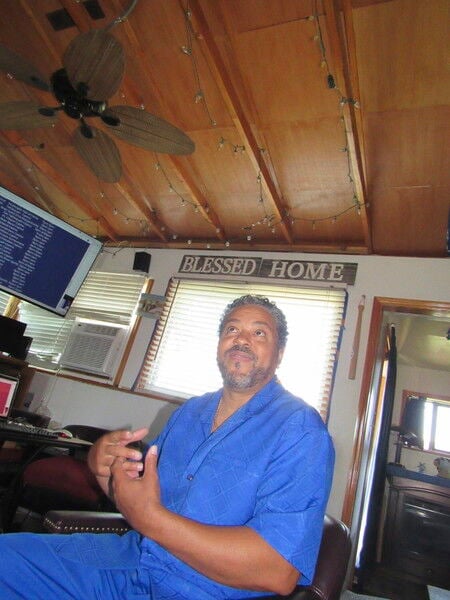 Kenneth Diggs paneled his porch ceiling with wood to give it a southwestern country look.

"When I was 3, if I'm not mistaken, my great grandmother and my mother bought my sister and brother an acoustic piano," Diggs recalled. "Every time they would get off the piano, after their lessons, I would go in there and, by ear, pick up whatever they were playing."

He said he began taking lessons around age 5, when he was big enough to sit on the piano stool.

"When I was at the rec center, I had the privilege of playing behind Billy Paul, the song 'Me and Mrs. Jones,'" he said. "I was friends with his family. They lived in north Philly also."

Diggs studied music theory at Philadelphia's Settlement Music School, then spent his teens playing with different bands and musicians. He traveled with bands in the U.S. Navy and Air Force.

After six years in the military, Diggs performed at churches, with his groups and with other groups.

That hooked him up with other Philadelphia area "oldies groups," such as The Drifters and The Coasters.

In Muskogee, Diggs worked with such musicians as Shy Willie and the Blues Crew and Starr Fisher, Harley Hamm and Bronko Carr.

The schedule of performing while managing a Maytag dealership got to be tiresome.

"I was getting in from shows at 3, 4 in the morning, getting up going to work, gotta be there by 9," he said. "I decided to stop and just play for the church, period."

The retirement was brief.

Diggs said that when musicians got together for his 50th birthday, "that's when that bug just went 'pooooh!' And I liked doing it."

He switched from keyboards to bass and formed D'Elegantz.

"I tinkered on the bass all my life, and I decided, full fledged, I was going to play the bass and prove to myself I can do it," he said.

Diggs keeps his keyboards and sound equipment in a back porch that he built. When he's not making music, he enjoys gardening, electronics and construction work.

Kenneth Diggs says he learned longevity touring with The Coasters in the late 1980s. The group hit the charts with "Charlie Brown" and "Poison Ivy" in the late 1950s. He said only one member from the original Coasters still performed with that group.

"You're looking a a person who's 70, 80 years old and they just drove a tour bus from east coast to west coast, and they've got to get out there and go straight on stage and perform," he said. "You've got young kids now who act too tired to do that."

"You could feel the presence of everyone who's been there," he said.

Travel had its good and bad days.

"You'd have to watch out for the sharks," he said. "Accommodations weren't always what you'd expect.... You can actually get taken for everything you have in this business."

He also recalled the fun he had.

Diggs continues his music with D'Elegantz.

"We can make things happen anywhere from a three-piece group to a 20-piece," he said. "Most of my guys, except for my guitar player, are newbies at this."

"When she opens her mouth, even the walls stop to listen," Diggs said. "That's how good she is."

Others in the band include Paul Barnett, male singer and percussion, and Mike McClure, guitar player. Diggs said McClure is "second to none."

"If you're in the casino, and you're spending money, I feel you should be able to hear something you like," Diggs said. "We play a little bit of everything, from blues to country to rock 'n' roll to soul."

Before COVID-19 hit in March 2020, the band performed an average of two to three weekends a month.

"This year was very hard because of the pandemic," Diggs said. "We still gigged during the pandemic, thank God. We still had other gigs they called us for as a three-piece group."

Using other talents given

When he's not making music, Diggs likes working with his hands.

"I don't like to pay someone for something I can do for myself," he said.

He built an addition with a kitchen and music area behind his house.

"I had always wanted an outdoor kitchen," Diggs said. "Working at an appliance store, you see all these things."

The first idea was to build a back porch, he said.

"I started thinking, I like to entertain," he said. "I redesigned it and I put in windows because I wanted to be out here all year long."

Contractors built the frame and installed plumbing, but Diggs did electricity and interior work.  He built the cabinets and installed granite countertops and an island for the kitchen.

Diggs also added stained wood to the ceiling to give it a Southwestern look.

"I wanted to make it look like an outdoor gazebo," he said. "I love the final product. I love seeing it when it's finished. Sometimes I will sit and just look at it. My father passed away, and sometimes tears come to my eyes because I know if he was here, he would be in love."

"I was music director for The Drifters. I had moved to South Carolina, where I met my wife. I came out to Oklahoma to visit her for Valentine's Day, stayed longer than I was supposed to. We got married in Christmas of 1996, and I've been here ever since."

"I love the cost of living much better than in most places. After being from a place like Philadelphia, where very few people speak to each other in passing, it's a big relief to come to a place where people just say 'hi' out of a clear blue sky."

"Things like Best Buy. We need more businesses, especially after the pandemic. And the streets are terrible. If we want to attract tourists, let's sit back and make our city better."

"My boss, Dave Bauer. I admired him because he was a young man who started a business and had nothing, and worked from the floor up. And now he expanded stores to out of state."

"The youth in the church. Working with them and watching them grow. That leaves a lot of memories. I'm known as Uncle Kenny by all the youth. Even the youth in Mississippi. Being an inspiration to them as my boss was to me. That's memorable."

"Tinker with my garden. I have tomatoes, everything. Also sit back and write music. I also enjoy sitting back and watching TV with my wife."

"Great place to live. Nice people. If you want to achieve different things. Muskogee is a good place to come."