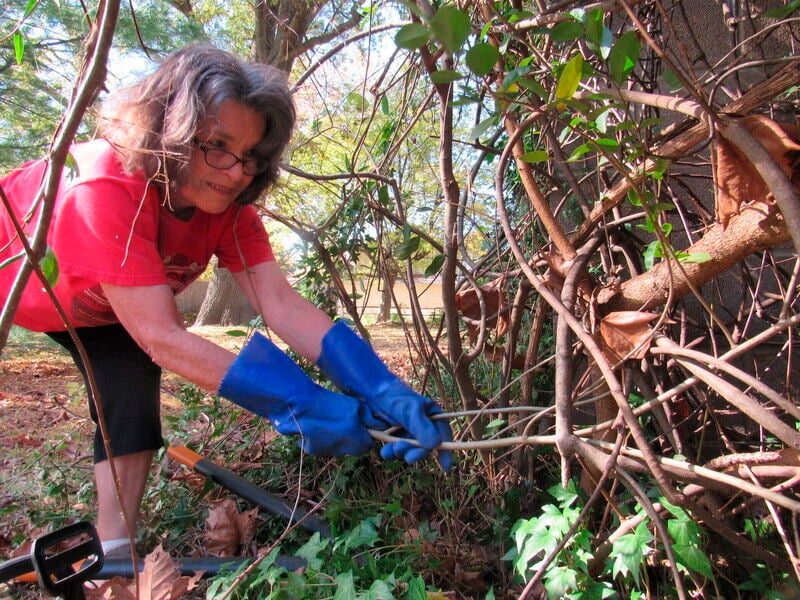 Teresa Chaudoin pulls a stubborn branch while working at the Founders Place Community Garden recently. She is active in the neighborhood association. 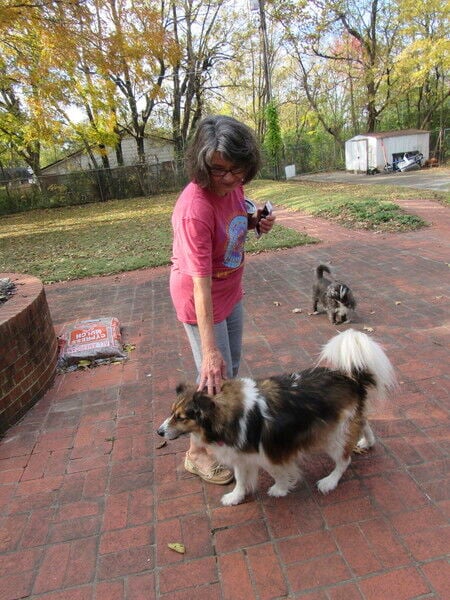 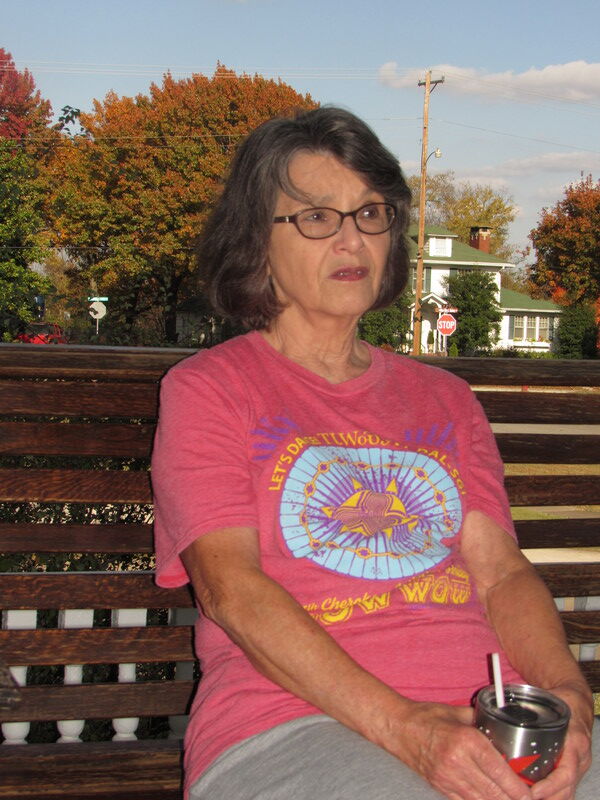 Teresa Chaudoin enjoys spending time on her front porch swing. The porch extends across the front of her historic home.

Teresa Chaudoin pulls a stubborn branch while working at the Founders Place Community Garden recently. She is active in the neighborhood association.

Teresa Chaudoin enjoys spending time on her front porch swing. The porch extends across the front of her historic home.

When Teresa Chaudoin sits on her wide front porch, she feels perfectly at home.

Her roots go deep in Muskogee.

"My grandmother moved here from Missouri in 1905, and when she lived here, she said Muskogee was a fine fine town," Chaudoin said. "Tulsa was just dirt roads and nothing compared to Muskogee. Muskogee was here for the Indian business. Everyone expected Muskogee to be the state capital, then oil was discovered in Tulsa."

She recalled growing up in Muskogee. Her father worked for OG&E. Her grandmother quilted. Her grandfather had a big garden.

"I remember from when I was 3 years old helping him plant gladiola bulbs, fruit trees," she said.

After graduating from Central High in 1965, she lived in Denver for 14 years. She had considered teaching college.

"The Red Cross was looking for someone to recruit American Indians to be bone marrow donors," she said. "I sought a degree in public health because I'd see so many young people who were potential bone marrow donors who were really not in very good health. I went to the Johns Hopkins School for Public Health for a year."

Back in Muskogee, she ran into an old junior high and high school classmate, Jim Cole. They got married and bought a house in the historic Founders' Place neighborhood.

"If you look around Muskogee, you'll see remarkable buildings, like Trinity United Methodist," she said. "I wish people in Muskogee would realize what an advantage it is to live in these neighborhoods."

Teresa Chaudoin recalled joining Master Gardeners to get some help with her azalea plants. She got much more.

"I really didn't know what was involved with it," she said. "You go to classes for 10 weeks and they're taught by people from OSU."

She said that, through the monthly classes, she learned a lot about the science of gardening, soil conservation, plant diseases, insect problems.

"There's a section on vegetables, fruits," she said. "It covers a pretty broad range."

Chaudoin said she also had to get in some community activity hours, which include working at the Papilion gardens, helping at Muskogee Farmers Market, or answering gardening hotlines.

"Once you get the classes done, you keep learning because all these Master Gardeners are so knowledgeable and you learn so much from them.

She said she did get help with her azaleas.

"What had happened was I had taken my gutters down many, many years ago, and it got too much water, and the pH got too high," she said, referring to soil acidity levels.

Master Gardeners advised her to put her gutters back up. Muskogee Assistant Parks and Recreation Director Rick Ewing, a family friend, also had advice.

"They're getting better," she said.

Reno was more work than planned

After they wed, Chaudoin and Cole bought a Founders' Place home for a bargain: $55,000.

"Nothing had been done to it for 40 years," she said. "The outside was not in bad condition, but the inside had DuPont 501 nylon carpet. It was all gold. And it had real heavy gold drapes. They had put mirrored tiles on top of the fireplace, all the way to the ceiling."

She said the kitchen had been redone in a 1950s style with brown antique cabinets. The tile was not installed right and had Formica laminate tied down with duct tape.

Choudoin said they were totally ignorant of what they were getting into.

"When I first got here, I took a pry bar and got up all that tile and thought it would be a nice wood floor," she said. "It had Masonite on it."

The family opted for a luxury vinyl tile that looks like wood. They also scraped wallpaper from the walls and ceiling.

One nice thing, however, was that all the woodwork had been restored. Chaudoin also loves a leather-like covering in the dining room.

"I like old houses," she said. "They have a lot of character. A lot of craftsmanship went into building these houses."

"We knew a lot of people in the neighborhood, so that was an attraction," she said. "They were involved in the association."

Chaudoin said she worked on a neighborhood survey, asking such things as the condition of the sidewalks, curbs, streets, even the trees.

"We're going to aggregate the results and use that in discussions with the city, trying to improve particularly sidewalks," she said. "This is such an old neighborhood, the sidewalks are not real even."

She said people of diverse ages and races live on her block.

"The people across the street have five children. There are kids next door," she said. "It's not all old people. There are more young people on this street than old people."

Choudoin said she's reminded of her childhood in the 1950s.

"In 1995, I was out of a job and I was trying to figure out how I was going to be accepted at Johns Hopkins. I moved back for six months and got won over by Jim Cole. That's how I got back to Muskogee, because Jim was here. I came back here in 1996 when I graduated from Hopkins."

"Muskogee is home. I have the best neighbors in the world. I love living in Founders' Place. My family is here. I think there are a lot of good things happening in Muskogee. I am encouraged by all the people who are doing things to restore the older parts of town."

"If people would not throw their trash out the window. I noticed lately there was a lot of trash along the roads. It doesn't make a good impression."

"My mother. She raised us in church. Because of that, my faith sustains me throughout my whole life. It's what sustains me. I am grateful we live in a country where we have access to the Bible. Mother taught Sunday school for 40 years at Boulevard Christian. She was the oldest person going to Curves in Muskogee and Wagoner before they closed."

WHAT'S THE MOST MEMORABLE THING TO HAPPEN TO YOU IN MUSKOGEE?

"Just finding Jim again, marrying him and living with him. He was my soulmate."

"I work on my house and work in my yard, do things to help out my mom. In better times, I go see my grandkids."

"Full of good friendly people, lovely old neighborhoods. It's a good place to raise a family."