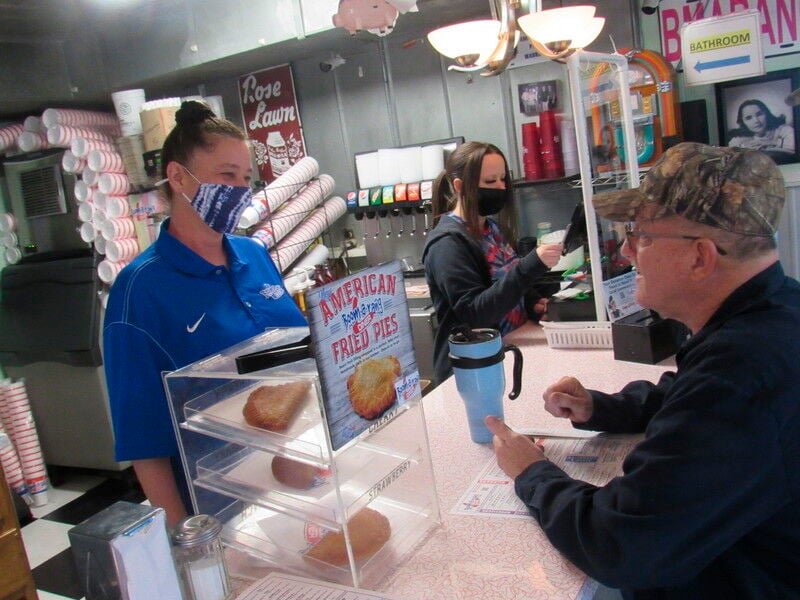 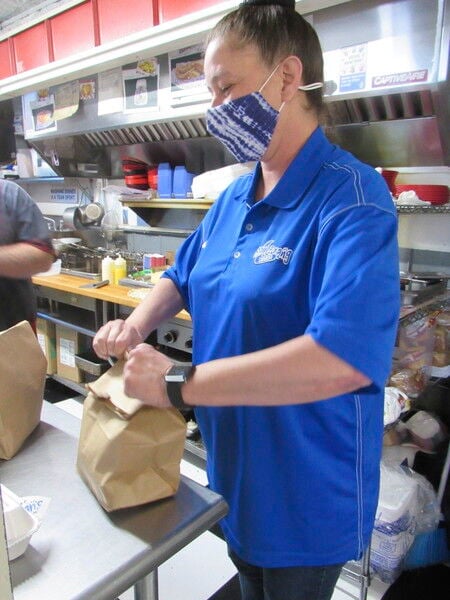 Penny Payne rolls a bagged meal at the Boomarang Diner on South Cherokee Street near Peak Boulevard. It is one of 10 diners she owns.

Penny Payne rolls a bagged meal at the Boomarang Diner on South Cherokee Street near Peak Boulevard. It is one of 10 diners she owns.

"You've got to work hard to get where you want to get," Payne said. "My mother was a single parent, she raised four of us kids, worked in the restaurant business the whole time."

"It was 20 miles from Daytona 500," she said. "Guys with the race cars would come up and eat and talk about the races."

A native of the Bronx, Payne lived in Indiana and Florida before moving to Oklahoma at age 13.

She said she hadn't planned to follow her mother into the restaurant business. Instead, she attended Connors State College to pursue a nursing license. Then a friend told her about a job opening at a local cafe, and Payne met Charles Degraffenreid in the early 1990s.

"Charles was like a second dad to me," she said. "He was a real family-oriented person, always wanting to help people."

Degraffenreid owned Broadway Cafe at the Broadway Shopping Center at the time.

"The grill was up at the front, where you could see everyone cooking," Payne said. "If the restaurant was open, he was there."

Payne said she worked at the Broadway Cafe for six years.

"Then, when he sold it, I stayed home for a bit, had another child," Payne said. "He decided to open up Boomarang Diner. He called me asked if I could help open up."

From there, Payne embarked on what would become a career. She partnered with Degraffenreid to open a second Boomarang Diner. Payne now operates 12 diners from Eufaula to Owasso.

Payne said she enjoys doing work that her mother used to do.

"I kind of followed in her path, and my kids have followed in mine," she said. "They work with me and for me."

Penny Payne recalls working at the first Boomarang on its first day of business in 1998.

"It wasn't busy, just getting it going," she said. "We were opening a diner nobody knew was opening. It was just me and him."

Getting to know customers was a top priority that day, she recalled.

Payne said she was the waitress while Degraffenreid was the cook.

"We hired a waitress that very first day, to start on the second day," Payne said. "Then within the first six months, we had a full crew of people and had to hire a dishwasher."

"Where they could all meet and talk and visit with all of us," she said.

She recalled doing whatever needed to be done, cook, greet, wait tables.

"I always liked to be in the front, but Charles taught me how to cook, too," she said.

Learning the customers was a challenge in those early years, she said.

"Learning their names, learning what the town wanted," she said. "To be on a personal level with people, they enjoy coming in when you know who they are and where they work, about their family."

By 2002, the original Boomarang got busy enough for Degraffenreid and Payne to open a second one on South Cherokee Street.

Payne said Degraffenreid asked if she'd partner with him to open the second one.

"From there, I saved every bit of money I had made from this store and opened another one," she said.

She recalled how quickly the south location grew.

"We had people lined up outside on Saturday mornings waiting to get in,” Payne said.

She now owns the locations on Peak Boulevard, West Okmulgee Avenue and one on South York Street. She also owns the diners in McAlester, Eufaula, Wagoner, Fort Gibson, Checotah, Pryor, Claremore, Catoosa and Owasso. The original diner on East Side Boulevard is owned by the corporate office, she said, adding that there are 54 diners statewide.

"There are days I go in and work all day, if need be," she said. "Recently, I just go in and check on them, hang out for an hour or to and go on to the next one. I kind of passed the harder work on to my son. I still do a lot of the paperwork."

Visiting with people continues to be the best part of the job, Payne said.

Payne also spends time helping with Muskogee Salvation Army, where she serves on the board.

She recalled how the Salvation Army had helped her.

"As a child, Christmas time, I was a Salvation Army child," she said. "It's nice to be able to help other people."

About eight years ago, Payne began offering a pancake breakfast at the York Street diner to benefit the Salvation Army Angel Tree. The Angel Tree program encourages people to buy clothing, toys and other accessories for children in need.

"It was my son's idea," she said. "I've always told the kids we need to do something at Christmas to help somebody or a family. He came up with that. After all the years that we had done stuff, he said we could help so many more."

On benefit breakfast day, all proceeds, including employee pay, benefit the Salvation Army, she said.

"We tell all our employees, and whoever wants to come and work can come and work for free," she said. "We have a lot of employees show up to help.... We usually have so many workers come in that day you can't get around to work. We get that many donate their time."

She said a Checotah manager has worked the breakfast every year.

"He asks when the breakfast is going to be," Payne said. "I have another who works at the Eufaula store and lives in Muskogee, and she comes to work it every year."

"It's not too big of a town, but it's not too small of a town. My three kids are here, my brother, my mother. I always said once my kids were grown up, I wasn't going to move anywhere. They were going to stay in the same place."

"Probably more things to do for the kids."

"Judge Norman. He's passed away. He was just very family-oriented and tried to help people."

"I just really can't think of anything that just stands out."

"Right now, I'm remodeling my house. That's been all my spare time. Go to my grandkids' ball games. I've got a granddaughter cheerleading, so that's a new one. Having family get togethers."

"There's quite a bit of stuff to do here. I feel there needs to be more things to do for kids. It's close enough to the bigger towns, where you need to go somewhere to do something. I just like our size of a town because it's not too big."

HOBBIES: "My grandkids. My grandkids are mostly what I do besides work."