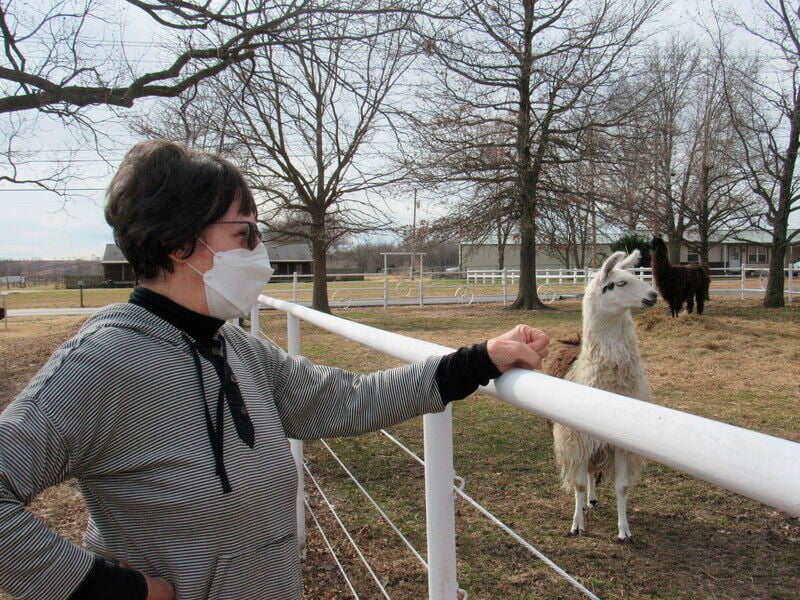 Joy Walker watches the family llamas, Otis, left, and Jet amble around their pen. They are the second set of llamas the family has had. 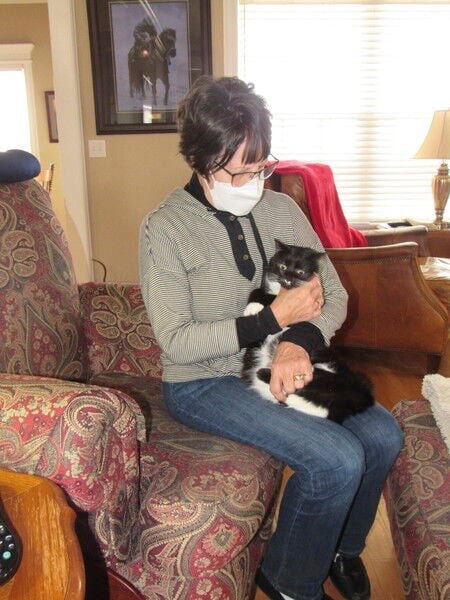 Joy Walker watches the family llamas, Otis, left, and Jet amble around their pen. They are the second set of llamas the family has had.

When opportunities to help others and enjoy life come Joy Walker's way, she takes them.

Walker said her father ran a grocery store, locker plant and slaughterhouse in Westville. He also had rodeo stock and produced rodeos.

"We were working the rodeo for him," she said. "We gathered stock, worked the gates."

She originally wanted to be a history teacher, but a summer job with the Oklahoma Department of Human Services changed her plans.

"When I got out of college, I worked for them full time," she said, recalling a lack of available history positions at the time.

The job grew into a 42-year career, which included 15 years in Muskogee, 17 years in Sequoyah County and various other counties the rest of the time.

The work also introduced her to the value of nonprofit organizations.

“I’ve worked at DHS long enough to know, when we would have families that had a need that was not available through DHS, we would reach out to nonprofits," she said. "I could see what they could do with families in need."

Retirement in 2012 gave Walker the time she needed to plunge into volunteer work. She is president-elect of Muskogee Soroptimist. She serves on the board for KI BOIS Community Action and The Salvation Army advisory board. She helps at the Muskogee Community Pantry on Thursday nights and with the Muskogee election board during elections.

Walker relaxes at her country home, where she and her husband have donkeys, llamas, a dog and barn cats. She also has three black and white indoor cats: Andy Pandy, Molly and Spotty Joe.

"They kind of run the roost," Walker said.

Joy Walker found opportunities to help people of all ages through DHS.

"There are times when a person may have a need, but they're clueless on what to do, and you can just help them," she said. "It's more than just a job. It gives you the opportunity to help people who need it."

She said the biggest need she saw people facing was "a full 40-hour a week job."

The state agency never had enough people to fully help the working poor, the disabled and the elderly.

However, Walker said she found it rewarding "to know you were doing a good job."

Walker also helped older people. She recalled once, when a nursing home told her about a resident with an alcoholic son.

Her son had access to her bank account and was draining her,” Walker said, adding how she located a niece in Tulsa who also had been concerned about the resident’s welfare.

“She convinced her aunt to get her son’s name off the account, and she helped with a lot of other things, like setting up her burial before it was all exhausted,” Walker said. “She said to me ‘On my way down here, I was hoping I would meet an angel, and I did.’ I was hoping the same thing about her."

Walker finds many ways to help women through Soroptimist.

"We're a small organization, but we have quite a few programs we help people with," she said. "Our program focuses on women and girls."

Mother's Touch encourages incarcerated women to record themselves reading for their children. Once a month, before the COVID-19 pandemic, volunteers would bring children's books to the Dr. Eddie Warrior Correctional Center.

"We’d take pictures of the mother, one for each child, and she'd get to read all or part of the book and we record the mother’s voice reading to the child,” she said.

Volunteers would send the children the mother's photo, the book and the disc.

"Those women, we don't have any idea why they're in there," she said. "They will say 'thank you very much for doing this. I am sending this to my daughter because it's her birthday.'"

Walker said she knows she's helping the women, "and those kids know their mother cares."

Another Soroptimist program Dignity 4 Her, provides feminine hygiene products through The Salvation Army, Catholic Charities and other programs.

Walker and her husband find refuge in a country home south of Muskogee.

"I like the wide spaces," she said. "We go outside and we just sit. Like everyone else, I work on the lawn."

She also likes heading out to the barn "to visit with the barn cats."

"They're rescue cats just like the inside cats," Walker said. "They've all been spayed. They have their heated water pan. They're all taken care of."

"And we've always had horses," she said. "Right now, our grandson has our horse. To fill that gap, we bought three little donkeys."

They also have two llamas, Otis and Jet.

"They're just kind of a novelty," Walker said. "They eat the grass down in the pasture."

The Walkers once owned a friendly llama named Jack.

"We bought his mother when he was born here," she said. "So, he was more gentle than any of the rest of them. People would stop and get out of their car and feed Jack. He would come up and smell their arms."

Llamas usually are not very friendly, though.

"They spit," Walker said, adding that when the llamas prepare to spit "you do not want to be in front of them."

"I married my husband, then I transferred from the DHS in Adair County to Muskogee."

"I like the size and the people. We're a multicultural community. Everyone works together for the community.... I just think we have a lot of respect for each other."

"I've been impressed with city council and county commissioners with their vision on where to go and how to get there. It would be great if they could increase their program in tearing down the derelict homes, having a grant or low-interest loan to help people improve the exterior of their homes. We've got to have new houses like we have on South Third and South Fourth."

"People we have in Muskogee who have given time to make the community better or make a difference in the community.... Ivory Vann and I serve on The Salvation Army Advisory Board. He is there to serve people that don't have a voice. He just keeps on going for what he believes needs to be done, whether it's popular or not."

"Being involved with youth rodeo. We used to be members of the Roundup Club years ago. It's a thing that the whole family can do together."

"Now that I'm retired, I like volunteering. I have time to give back to the community, and that's what I want to do."

"Small town that has some challenges with the times that we're in. It's multicultural. We have a respect for each other."

PROFESSION: Retired after 42 years with Department of Human Services.

HOBBIES: "I read all the time. Every day, I'm reading something. I love living in the country and I love animals."