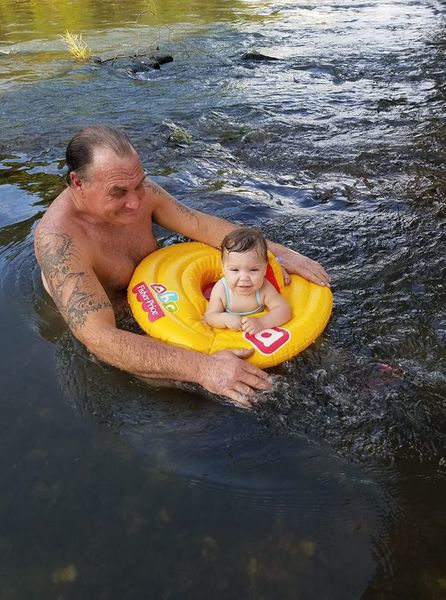 Larry Bell swims in the Illinois River with his granddaughter. Note the tattoo on his right arm. 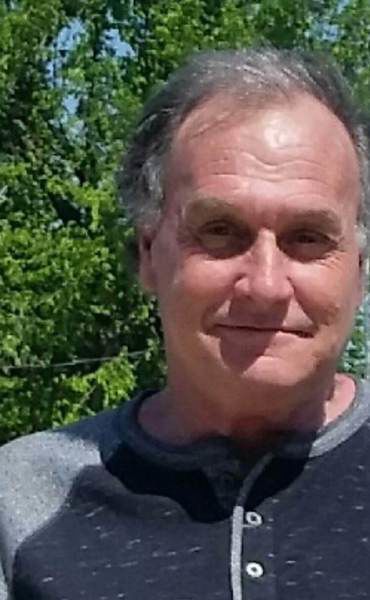 Officers from the Muskogee Police Department and the Muskogee County Sheriff's Department continue searching for Larry Bell, a 62-year-old Muskogee man who has been missing since June 14. Officers are trying to find more leads about Bell's location and condition.

“We’re asking anyone with information on his whereabouts to contact us," said Michael Mahan, Muskogee County undersheriff. "We’re attempting to locate and interview witnesses who may have seen him. At this point, we’re not ruling anything out in terms of his disappearance.”

A Silver Alert was issued on June 17 for Bell, who was last seen wearing blue jeans and cowboy boots. He has a large tattoo of a dolphin on his right arm, a smaller tattoo on his right ankle and a large scar from his sternum to his stomach. According to the police report, he is missing a lung and suffers from dementia, so he does not do well in the heat. He is believed to be in imminent danger, according to a statement from Muskogee police.

Bell drives a black 2010 Chevrolet Silverado truck with chrome trim along the top of the bed and a dent in the right front fender, according to a statement from the Muskogee police. The truck has a Cherokee Nation license plate, CW1341. According to Susan Bell, Larry Bell's wife, the truck also has flood lights on the front bumper, and the rear passenger door handle is missing.

Larry Bell left his house at approximately 10 p.m. June 14 to look at a motor around U.S. 69 and Smith Ferry Road. The exact location of the place he was visiting is unknown. Susan Bell was in bed at the time her husband left the house.

Larry Bell has a history of leaving unannounced for days at a time. A few months ago, he left for Oklahoma City to look at a pile of tires without telling his wife. He lost his phone during the trip and was unable to contact her for a few days, but not contacting her for this long is uncharacteristic, she said.

"That’s why I didn’t get too worried at first," Susan Bell said. "He like, messes with car tires and truck tires and if he finds a pile of good tires, he can stay gone for quite a while."

If you prefer email, send one to Perry Galvin, lieutenant over Investigations Division at the sheriff's office, at pgalvin@muskogeeso.org or Mahan at mmahan@muskogeeso.org.

If you have information of Larry Bell's whereabouts, call the Muskogee County Sheriff's Office at (918) 687-0202 or the Muskogee Police Department at (918) 577-6906. If you prefer email, send one to Perry Galvin, lieutenant over Investigations Division, at pgalvin@muskogeeso.org or Mahan at mmahan@muskogeeso.org.