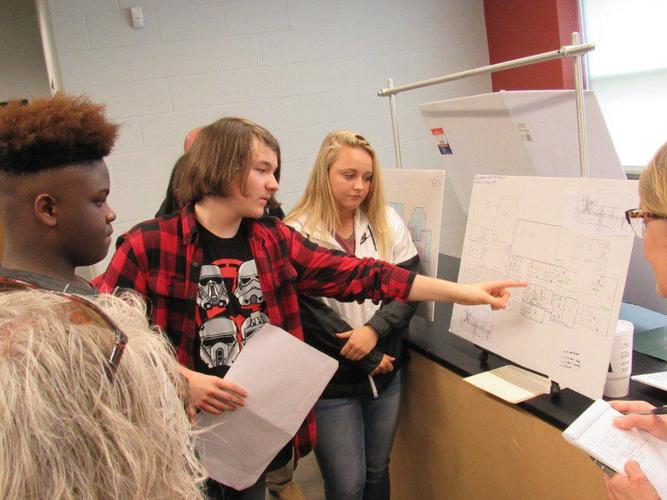 New Tech Academy students, from left, Chris Jones, William McIntire and Haidyn Henry, show their ideas on how to improve Arrowhead Mall. The group was among 24 groups showing ideas on Tuesday. 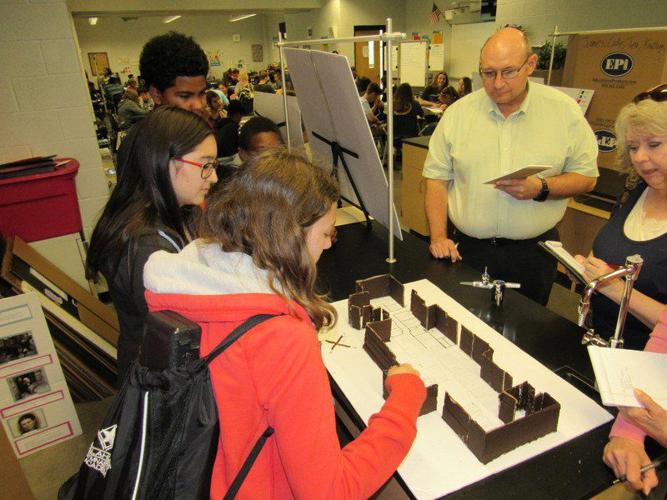 New Tech Academy students, from left, Chris Jones, William McIntire and Haidyn Henry, show their ideas on how to improve Arrowhead Mall. The group was among 24 groups showing ideas on Tuesday.

Arrowhead Mall would have a skating rink, child care center and laser tag if New Tech Academy students had their way.

First place went to a group made up of Brianna Henshaw, Ella Watson, Ethan Meinershagen, Bella Bartley and Gage Foreman.

The winning group proposed a space to show Muskogee's history. There also could be a gift shop.

Muskogee Public Schools Secondary Education Director Melony Carey said the competition was part of a collaboration between MPS and the University of Oklahoma Urban Design Studio. Graduate students with the studio, under the direction of Shawn Schaefer, are helping the city of Muskogee find ways to revitalize downtown, including Arrowhead Mall.

"Shawn Schaefer has really been a fantastic partner with our schools," Carey said. "Earlier this spring, he helped facilitate a workshop for teachers on illustrating the structure of a story through architecture. When I asked if he could help me with a design challenge for our secondary students, he let me adapt the Arrowhead Mall competition his students presented in April."

Schaefer recently held a video conference with AR's New Tech students to discuss their ideas and how to view the project from a professional architect's eyes, Carey said. Students must meet many of the same criteria as the college students.

Chris Jones' group proposed moving laser tag in. He said there is a laser tag place in downtown Muskogee.

"Let's switch the laser tag with the arcade and golf," Chris said.

Jasmin Reyes-Torres, who was in Chris' group, suggested a place where people can study and have access to printers and computers.

"They recognize the mall is part of downtown," she said.

Johnson, who also is on the Muskogee City Council, said the New Tech ideas echo ideas he saw from the OU students. He said he liked ideas New Tech students had for breaking up the mall parking lot and adding more green space.

"They had a different perspective the OU students didn't have," Johnson said. "They had ideas for kids. Their insight has been really powerful."