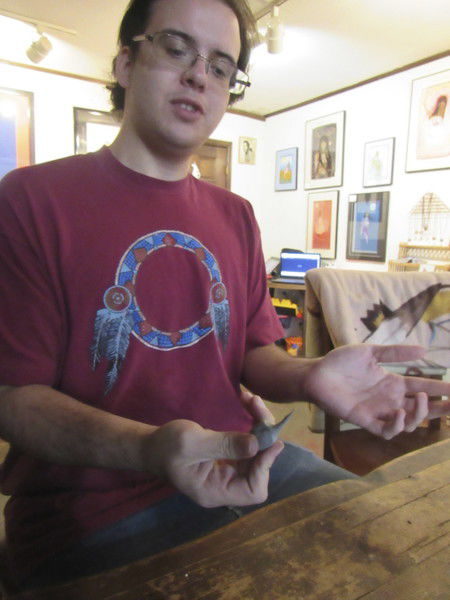 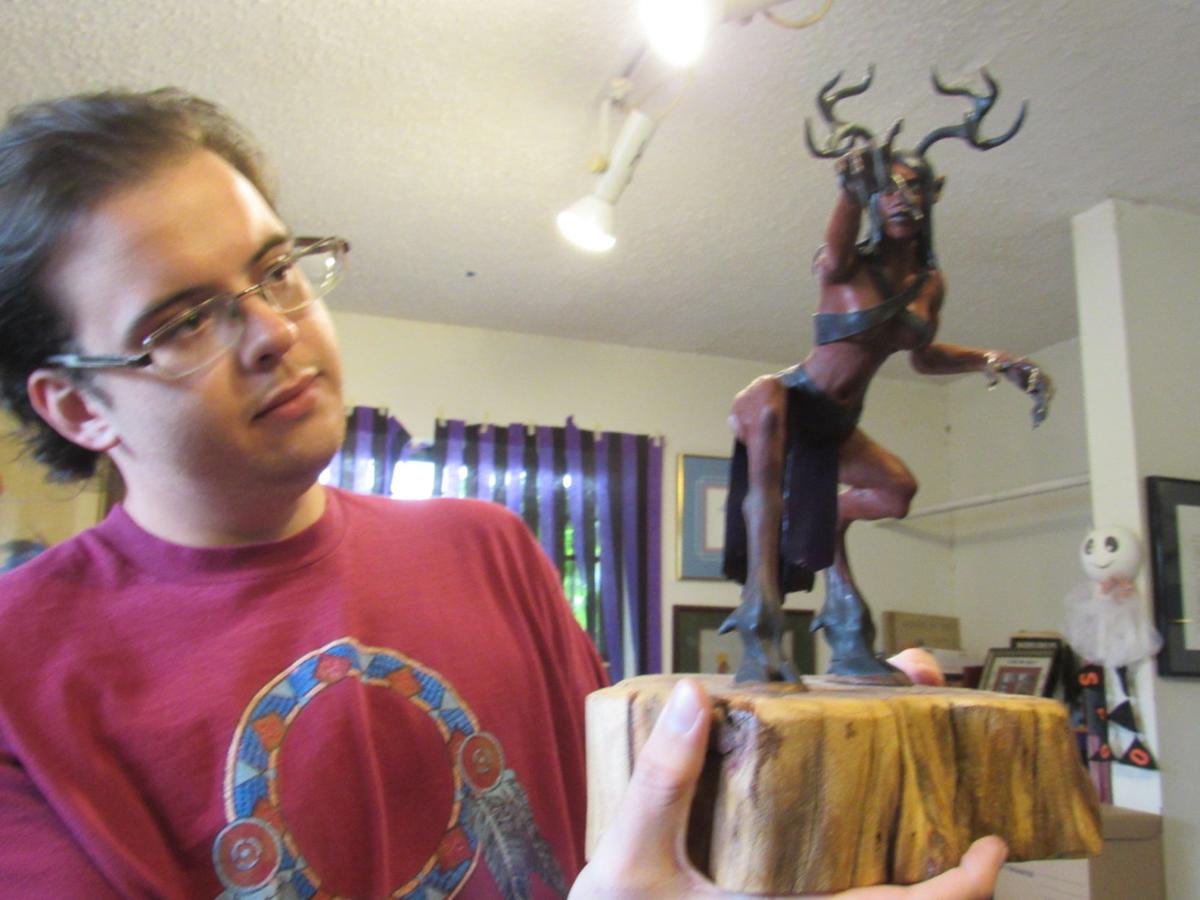 Lisan Tiger Blair recently placed at a Chickasaw art festival with this deer woman sculpture. He said he goes to competitions to learn. 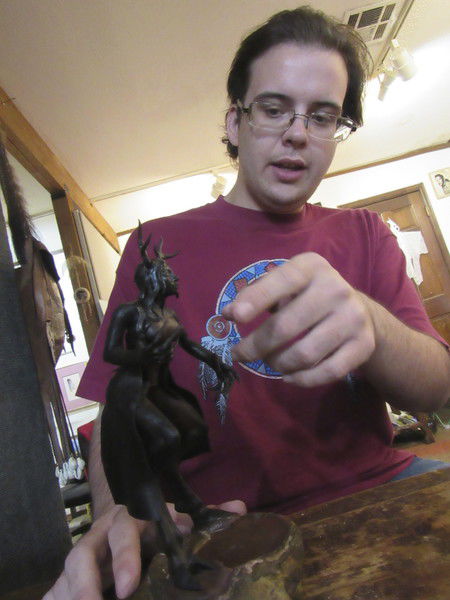 Lisan Tiger Blair shows how detailed he gets while sculpting. He uses a firmer clay for the tiny fingers than for the body. 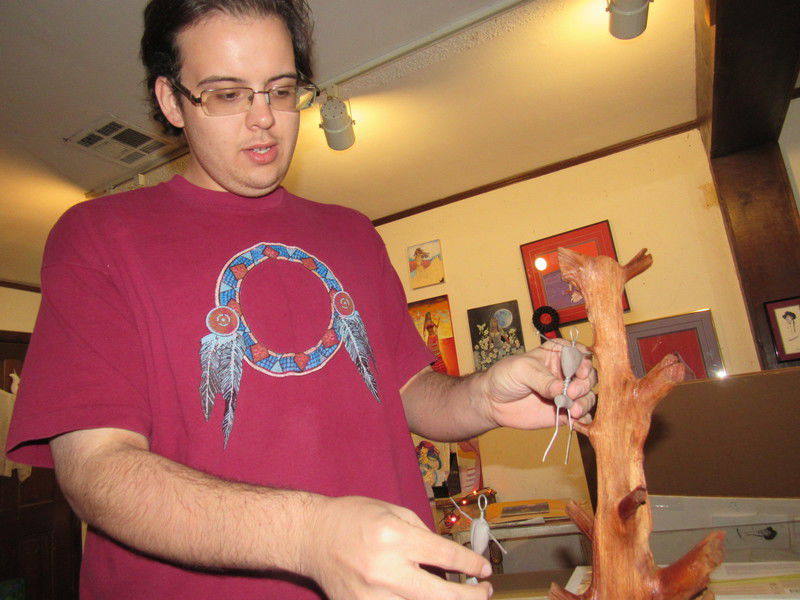 Lisan Tiger Blair shows how he might craft his next sculpture, called "Little People." He puts clay on the wire frames.

Lisan Tiger Blair recently placed at a Chickasaw art festival with this deer woman sculpture. He said he goes to competitions to learn.

Lisan Tiger Blair shows how detailed he gets while sculpting. He uses a firmer clay for the tiny fingers than for the body.

Lisan Tiger Blair shows how he might craft his next sculpture, called "Little People." He puts clay on the wire frames.

“I think it was a happy accident they found out I could sculpt," Blair said.

Blair's mother is noted artist Dana Tiger. He said she gave him some Play-Doh when he was about 5 years old.

"I sculpted a little rose for her and she loved it," he said. "I’ve been sculpting ever since."

He said sculpting was like a hobby at first.

Blair said he mostly has learned art on his own, partly by entering the art competitions.

"It's good to see what potential you can get to," he said, adding that it's harder to compete with adults than with youth because more adults are professional artists.

"It helps me plan out my sculptures in a design sense," he said. "Before, I would never preplan my sculptures. Then, after I was taking these art classes, I started sketching out how I wanted the work to evolve."

The history classes help Blair learn about his people's ancestry and "keep the culture alive."

"It's important to know where I came from," he said.

Blair knows the challenge that comes with continuing the legacy of an artistic family.

"You have to live up to their standards," he said. "It's what helped me become a better artist, because without their scrutiny, I wouldn’t be as good as I am today."

A trip to the Smithsonian Institute spurred Lisan Tiger Blair's desire to teach his art. He said his family was invited to a Native American symposium about three years ago.

"My mom had a booth where she displayed her artwork, and they invited me to teach the youth how to sculpt," he said. "Since then, I've been trying to pursue, wherever I can, teaching gigs. Let me show up and inspire the youth."

Blair recalled seeing Native dancers and artists from across the United States.

He recently taught some sculpting workshops at Bacone College. He taught the workshops through a program at Bacone.

During the workshop, Blair demonstrated sculpture, then had workshop attendees sculpt their own works. He said students had their own ideas on what to sculpt.

"I bring a little oven that they could bake it in, then they could keep it," he said. "That's usually the class I like to do, make a certain animal, so they can take it and keep it."

About 10 or 12 attended his latest workshop.

"It was a bit arts and craftsy, but at what other class could you use where you can make your own art and keep it," he said.

Blair said he was encouraged by the potential the students showed.

"That's my planned career path is getting into teaching sculpture art, steps I go through, how I do it," he said.

Blair starts each work by forming an armature, or wire skeleton for his clay.

"If it didn't have any wire bracing, it would just tip over in the baking process," he said. "That's probably the fastest part. It takes roughly an hour."

He then applies the clay, layer by layer.

"If the sculpture is any big, I use tinfoil," he said. "I gradually build more and more clay on top of that to get the muscle tones and the clothing."

Different works pose different challenges. He recalled working to get the hair right on one recent sculpture of a woman with long nails. He said he wanted the hair to have a wild look.

"And there are different steps," he said. "Like, I have to pre-sculpt the fingernails and put them into the hand. It's like a bunch of reverse steps."

Blair uses two types of clay for most works. A softer clay forms the body and limbs. The harder clay goes for more delicate features, such as fingers.

He said it took about a week or two to finish the woman sculpture. He said he knows his work is done after the family scrutinizes it.

"It's when it gets to looking like there shouldn't be anything else I need to add to it," he said. "If not, that's when I call it and say it's done."

Blair then bakes it in a regular oven at 275 degrees for an hour, depending on the finish.

Blair has won several art shows since entering a dinosaur sculpture in an Oklahoma City show at age 9.

"I entered the youth and won the competition," he said. "It was an enjoyable experience to enter a competition where I do my absolute best."

He placed first from 2,000 entries from around the world. He said he felt thankful upon winning.

"It helped reinforce my decision to pursue this career path," he said.

"I think it's healthy to be a little pessimistic when it comes to competitions," he said. "You're not always the best, and judges opinions are all over the place. So it's never a guaranteed placing."

He said he goes to competitions to learn, as well as win.

"I'm always looking at my competitors' art work and seeing how I can improve on my own through being influenced or inspired by the fellow competitors work," he said. "I like to look and see how I can change and adapt my work to stay on the same level as everyone else, skill-wise."

Blair recalled going to one competition he did not win and visiting different exhibits.

"I planned in the future what I could do differently to make a winning piece," he said.

"I was born into the Tiger family, who owned a gallery since the 1970s. And I decided to stay in Muskogee to help grow the business and keep it alive through hard work."

"I like the festivals, more events where a lot of people gather, the Tulsa State Fair in a way."

"I admire Dana Tiger and her work. She's helped me along with my career so far, and she will continue to do so for the rest of our lives."

"Winning the Five Civilized Tribes art competition when I was in youth art. It was quite memorable because it gave me a chance to show my sculpting abilities and bring it out to the public. I won the Willard Stone Award.

"It's also quite memorable whenever I finish a sculpture and finally get to stop working on it."

"I help around the business. Go with family, travel to Tulsa to be with close friends."

"Muskogee has potential to be a great college town and Native American art center and gathering place."