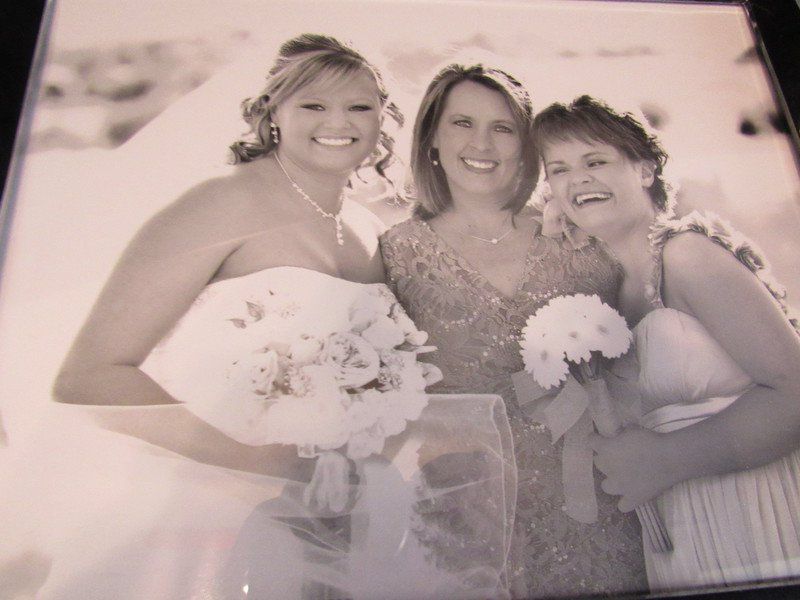 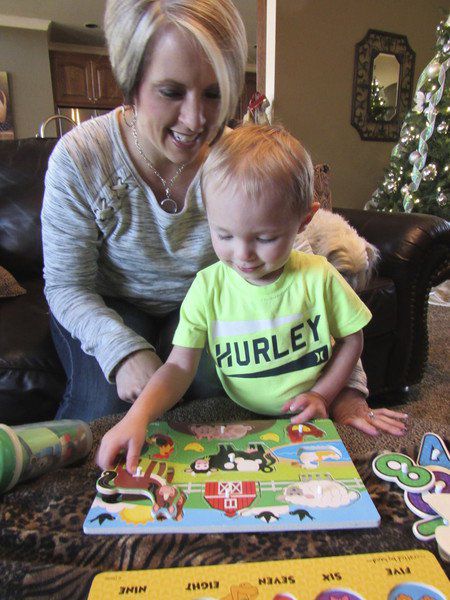 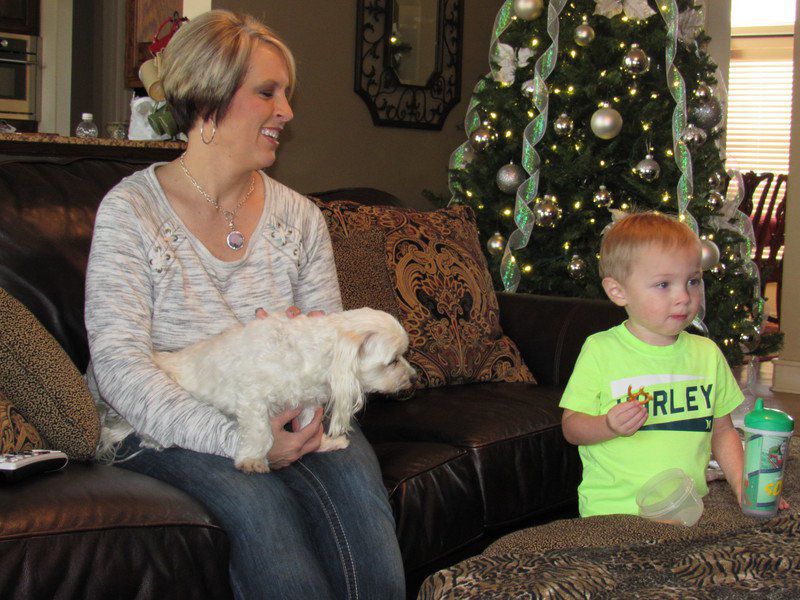 Christy Biggs holds her dog while watching her grandson, Eli. Biggs said a close-knit family taught her how to care for others. 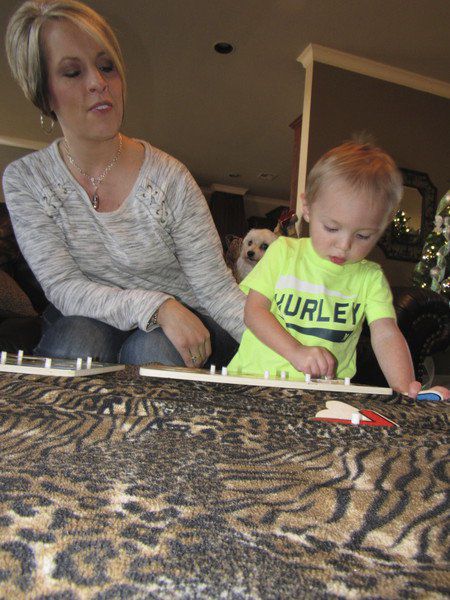 Christy Biggs helps her grandson, Eli, assemble a puzzle while her dog watches.

Christy Biggs holds her dog while watching her grandson, Eli. Biggs said a close-knit family taught her how to care for others.

Christy Biggs helps her grandson, Eli, assemble a puzzle while her dog watches.

Muskogee nurse and Salvation Army volunteer Christy Biggs has been on the giving and receiving side of compassion.

"We always try to take care of each other," the Boynton native said. "Family is very important to us. As the oldest grandchild, I always took care of the cousins, even as I grew up."

She attended grade school in at Wainwright. She graduated eighth grade with four classmates. She met her future husband, Scott Biggs, while she was a freshman at Morris High School.

"I dated him four years, then got married," she said. "We've been married 27 years."

Biggs became a registered nurse and worked in a pediatric intensive care unit after nursing school.

She raised her two daughters to be caring women. They accompanied her while ringing bells or helping needy children through the Salvation Army.

Biggs got involved with the Salvation Army board, including arranging annual Swon Brothers benefit concerts.

Her life changed when she lost a daughter and she became critically injured in a 2015 auto accident. Biggs had to slow down and let people care for her.

"I’ve always been one who wanted to help people, to take care of people. That’s just been my nature,” she said. "You learn to not sweat the small stuff, cherish what you have, every minute you have."

Christy Biggs said her first contributions to the Salvation Army were pies.

"My mother was involved with the Salvation Army," she said. "One year at Thanksgiving, we made pies for their Thanksgiving dinner. When I went to deliver the pies with her, it touched me so."

Over the years, Biggs and her daughters bought toys and clothes for young "angels" on the Salvation Army Angel Tree. They also rang bells by red donation kettles each Christmas.

"Every year, even before I got involved, we always picked an angel," she said. "Getting to buy gifts for kids is so much fun. I got to be there during distribution days, when they come and pick up their presents. You have parents with tears running down their face saying 'thank you so much."

She said bell ringing is fun "as long as you're at a place where there are people."

"You can have your music going. You're greeting people, you get to talk to the community. It can be a lot of fun," she said. "You find that most people dig out something. I've had people even go to their car to get something. And you have those who don't give. And that's fine."

As a young mother, Biggs had two little girls to rear.

She said Ashley and Brandi were born nearly three years apart. However, Ashley, the older daughter, was born with medical problems that affected her vision and other abilities.

"It was almost like having twins at times,” she said. "As Ashley would get older, they still were doing a lot of the same things."

There were lots of doctor visits, Biggs said.

“People would talk to me and they would even use the word burden,” she said.

Biggs stressed her words slowly, “Never in my life did I feel she was a burden.”

“She was the biggest blessing we could ask for,” she said. “God trusted us with those two girls, and he gave us, my husband and I, what we needed to raise those girls. So I never looked at it as a burden or a struggle. I was their mom, that’s what you do.”

They enrolled Ashley in Oklahoma School for the Blind. After a year, the family moved to Muskogee to be closer to the school.

While she was at school, Ashley played blind and deaf child, Helen Keller, in the Muskogee Little Theatre production of “The Miracle Worker.” She and her sister got to perform in a movie.

“But her passion was playing guitar,” Biggs said. “She took lessons from Harley Hamm. She played the saxophone and was in the jazz band at school. She had a drum set and played drums for a while. Her passion was her guitar."

That was one of the last things Ashley did before she was killed in an auto accident, Biggs said.

"We were at a revival and she got to play a song that she had even written a verse for," she said.

The auto accident occurred two days before Easter in 2015.

"My oldest daughter and I were coming home from Tulsa, and we were hit head-on," Biggs said, recalling that both cars in the collision were on fire.

"I looked over to see if Ashley was there," she said. "I turned around and the fire was in front of me. I went over to get to my side of the door and I wasn't able to open it. I trusted in God and said, 'I'll live and not die' and I said it again, and the door opened. I could not walk, so I had to lay down and roll across the highway, where they were giving Ashley CPR."

Biggs was flown to St. Francis Hospital in Tulsa, where she spent more than a month in the intensive care unit. She said doctors wanted to amputate her leg, but found a way to save it.

"So, I had 12 surgeries," she said. "My knee is finished, my leg is finished, I had two post-op infections. I still have to have reconstruction on my foot."

The woman who cared for so many people now had people to care for her.

"I had so many friends I didn't know I had," she said. "Runt's Barbecue did a fundraiser. Kristi Hoos did a Super Hero race. People I didn't even know came out to support me."

"Ashley, my oldest went to Oklahoma School for the Blind. And, when she was 4 years old, we moved here because of that. She could go to school and we didn't have to leave her there."

"I get to see the good in people and the community involvement, when it comes to the Salvation Army. They have a heart for people."

"As far as overall, I see improvements being made. I see downtown being upgraded. I would like to see more businesses, so we don't have to go to Broken Arrow or Tulsa. Bring some of that stuff in, I think would help a lot."

WHAT OKIE FROM MUSKOGEE DO YOU ADMIRE MOST?

"The person who has impacted me more than anything has been my mother. My mother is my best friend, my mentor. She influences me. We do everything together. I can call her for anything. She was in the Salvation Army before I was, so she always set that very good example."

"There are so many. My children, watching them grow up. Ashley was Helen Keller in 'The Miracle Worker' at the Little Theatre. She and Brandi both were in a movie filmed in Tulsa."

"It's a good place to raise your family. It's a small enough community. It's not too big and overwhelming."

HOBBIES: "My grandchild. He's my number one hobby, I think. Also, working with the Salvation Army."