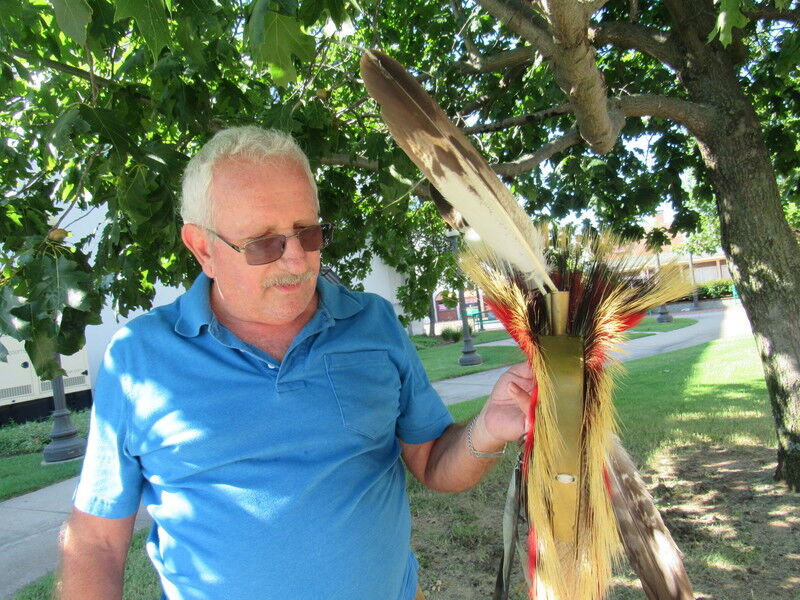 Thomas McKinney shows a headdress made of porcupine guard hair and eagle feathers. He said Native Americans honor eagles because they fly higher than other animals. 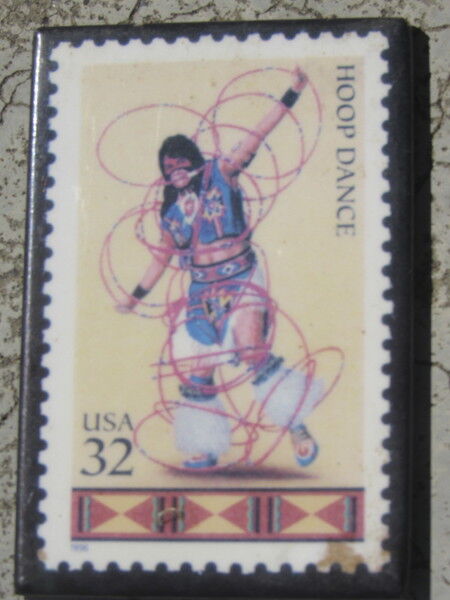 Thomas McKinney is depicted on this postage stamp doing a hoop dance. The stamp was recreated for a magnet. 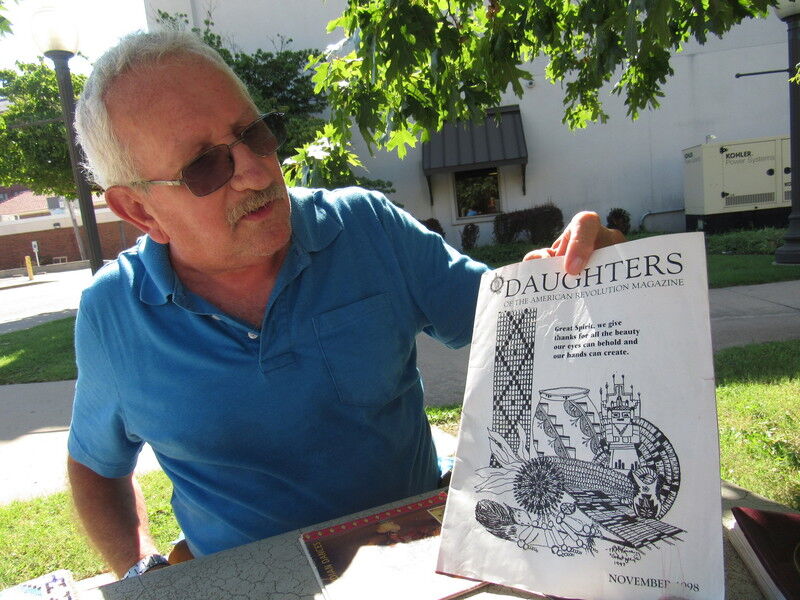 Thomas McKinney did the art for this Daughters of the American Revolution magazine. The DAR is a long-time supporter of Bacone College, where McKinney studied art and nursing. 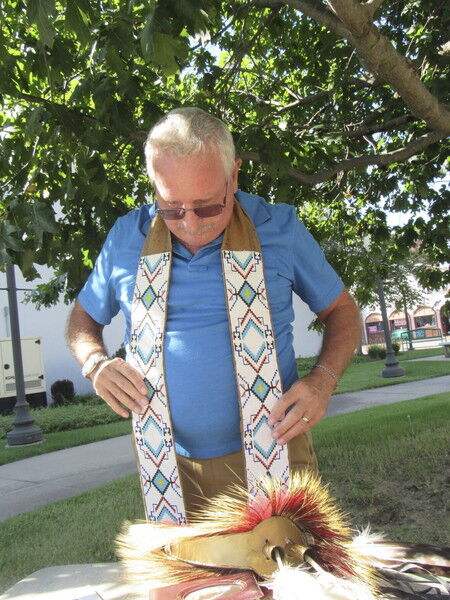 Thomas McKinney adjusts regalia with Lakota beadwork. He did the beadwork while attending Bacone College.

Thomas McKinney shows a headdress made of porcupine guard hair and eagle feathers. He said Native Americans honor eagles because they fly higher than other animals.

Thomas McKinney is depicted on this postage stamp doing a hoop dance. The stamp was recreated for a magnet.

Thomas McKinney did the art for this Daughters of the American Revolution magazine. The DAR is a long-time supporter of Bacone College, where McKinney studied art and nursing.

Thomas McKinney adjusts regalia with Lakota beadwork. He did the beadwork while attending Bacone College.

Thomas McKinney's life is steeped in many varieties of Native tradition and lore.

He learned it as a child hearing stories from his grandmother, a Seneca Indian. He and his family danced at powwows around western Pennsylvania. He also became a Boy Scouts of America Eagle Scout.

At age 16, the National Council of Boy Scouts sent him to the Rosebud Sioux Reservation in South Dakota to help establish Explorer posts.

He recalled dancing at a powwow north of Pittsburgh when a Bacone College trustee asked if he ever considered attending college.

"Coming to Oklahoma was one of the things I never thought I'd be able to do," McKinney said. "I came out of five kids and my dad worked in the steel mills of Aliquippa, Pennsylvania. It was next to impossible to think I'd be able to go to college."

At Bacone, he studied Native art under such greats as Dick West, Terry Saul and Solomon McCombs. He later studied nursing at Bacone during a time when few men ventured into the field.

He said nursing instructor Modesta Davis "was hard on all us guys."

“She told us on the very first day of school we were invading a woman's profession and that she would do everything in her power to get rid of all us boys,” he said.

In 1979, McKinney began a 28-year career with the Muskogee Fire Department. He recalled helping to put the Christmas Eve 1991 fire at St. Paul United Methodist Church.

"Sat on corner of 30th and Okmulgee, pumped water into aerial ladder to shoot it down into the building," he said.

He also worked with Muskogee County Emergency Medical Service in the early 2000s.

But, McKinney keeps his Native traditions. He dances at powwows with his wife, children and grandchildren.

He said the Native culture is not as strong in Pennsylvania as it is in Oklahoma,

"But we had powwows all over the place," he said. "My grandmother was Seneca and she told me all kinds of stories of creation and things like that."

McKinney started doing Native dancing with his family when he was 9. He said his mother, brother, sister and brother-in-law danced for a while, but didn't keep up with it.

McKinney said the Cherokee and Seneca cultures are similar.

"We have many of the same songs, dances," he said. "The language and the dress is very similar."

McKinney encountered a different Native culture as a teen. Betty Hulk, a representative from the Rosebud Sioux Indian Reservation had come to Pennsylvania for a Boy Scout celebration of Native culture.

"When the National Council of Boys Scouts found out I actually made contact with someone who lived on the Rosebud reservation, they asked if I would be interested in starting an Explorer post," McKinney said, adding that he helped start Explorer posts, Boy Scout troops and Cub Scout packs at surrounding reservations.

"It was while I was on the reservation was when Betty and Francis Hulk accepted me as part of their family."

"I was told your had to be at least a fourth blood Indian to attend Bacone," he said. Once I got here, I was told that had not been in effect for a long time.

One of the first people McKinney recalled meeting was the great-grandson of the great Lakota Chief Red Cloud.

McKinney said studying under Dick West and others was like "going back 100 years and learning how to function in an older, more simple background."

McKinney said West taught him to do the traditional, two-dimensional Native paintings, "and make them look real."

"Ruthie Blalock was there and Gary Colbert," he said. "I got to meet a lot of the original instructors."

for family to dance

Before the COVID-19 epidemic struck last spring, the McKinney family usually went to two or three powwows a year.

“I had just completed my 10-year-old granddaughter's outfit, and she got to dance twice, when the COVID hit," he said, adding that they'd attend “any one that's available.”

McKinney said his wife, Carmen, does traditional dances in a Seminole dress.

His oldest son is a traditional dancer, while his youngest does fancy dancing. His daughter has danced fancy shawl and jingle dress, and now is traditional.

He said he's working on his northern traditional dancing and straight dance.

He said the family is anxious to go to powwows again.

"I came to Muskogee to attend Bacone College when I was 20 years old."

"I admire the first responders the most. I started out one the police department, then I got into nursing school at Bacone. I got on the fire department, where I retired from, then joined Muskogee County EMS, where I stayed until I got injured and was forced to retire. So I worked at the hospital in the lab for about a year."

"When I got to meet all of the Blue Angels flight team. I made beaded bolo ties for the entire team. I was working at Bacone College at the time."

"I like to read, traditional Native American dancing, spend time with my family, and work on the house that my wife and I are renovating."

"We need more stores in Muskogee, a variety. We also need to work together as one community, not as two separate sides of town."