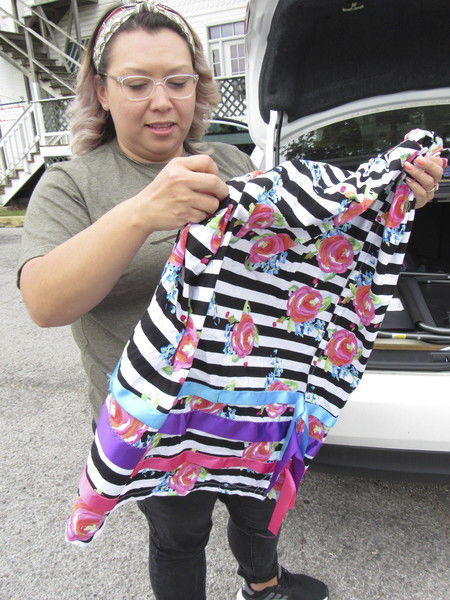 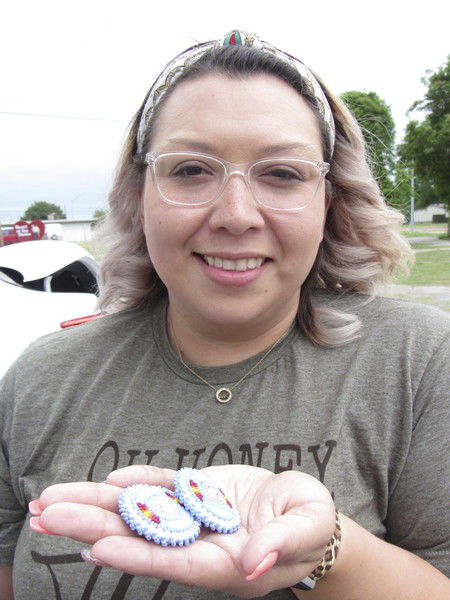 Jana Taylor shows some of her Native beadwork. She said she learned a lot growing up in a Cherokee family.

Jana Taylor shows some of her Native beadwork. She said she learned a lot growing up in a Cherokee family.

Jana Taylor gained something important growing up: "Being confident and being a Cherokee woman."

The Salina native said her grandmother taught her about the traditions. They attended a church that only spoke Cherokee.

"Me and my sister learned the Cherokee songs we still know today," Taylor said.

Taylor has many ways to show her confidence.

"I'm proud I'm a first generation college student," she said. "Neither one of my parents went to college."

Taylor worked at Muskogee High School as a liaison with the Johnson O'Malley Indian Education Program. Taylor recalled the Indian education director encouraged her to seek a degree in jurisprudence and Indian law.

"My first son was a month old when I started getting my degree," she said.

Taylor shows her confidence in more creative and tasty ways.

“I rarely cook at home,” she said. “I'm so glad we have the American Pie here. Colton's Steakhouse, Harmony House, of course."

Baking, however, is a different matter. She began doing cakes in high school.

“Baking is my time to escape,” she said. “I love trying out new recipes for cookies and trying new things with sugar art.”

Taylor bakes and decorates cookies and cakes at Harmony House.

Jana Taylor recalls being impressed by cakes she saw on cooking shows.

"Watching them build cakes that are five tiers high with fondant and frosting," she said. "Watching that really drew my artistic eye to it, finding out what else can I do with a cake to make it not look like a cake."

The secret is very cold frosting, she said, adding that the frosting often is not as smooth as she would like.

"I even paint on cake. I draw with markers on cakes and cookies, edible markers," she said. "I do a lot of air brushing on cookies."

Taylor said she learned cookie craft by watching videos on YouTube. She said she loves how cookies could be manipulated into all types of flavors and shapes.

"I was buying so many cookie cutters, I was like 'there has to be a better way,' so I free hand cut my cookies," she said.

After rolling out her cookie dough, Taylor uses a stencil and X-acto knife to cut the dough. She makes frosting while the cookies bake.

Oklahoma weather is the biggest cookie-making challenge, she said.

"The humidity is worst for cookies. The rain doesn't allow my cookies to dry when they need to," Taylor said. "I have to set them in the sunlight for them to dry. If it's cloudy, they do not dry as fast as if the sun was out."

Through the Johnson O'Malley Indian Education Program, Taylor worked with many students who were in foster care or separated from their parents in other ways.

"Seeing them and the challenges they had to face with not living with a Native family and trying to figure out who they are really stuck with me," she said. "I had never seen kids have to deal with those challenges until I came to Muskogee."

The children were not being taught their Native traditions, she said.

"That led me into wanting to help them, help teach them who they are," she said. "It just really stuck with me."

Taylor said she hopes her degrees in Indian law and jurisprudence help older students find access to the cultural references they need.

"After graduating from Bacone, I met the requirements to apply for admission at TU," she said.

Many of Taylor's law classes were online. She was the only student from northeast Oklahoma.

She said she hopes to work for the Cherokee Nation's child welfare department.

"To help kids to not lose their culture, their heritage, who they are," she said. "To push them through to college, to trade school. To make them feel like somebody is there for them."

Taylor said becoming Miss Indian Bacone pushed her to learn about powwows and other aspects of Native culture. She said the most exciting thing was learning about different tribes.

Taylor said her sons are learning about the Pawnee side of Native dancing.

"Their grandpa taught them and is still teaching them about that side of who they are," she said. "They're of the Skidi band of Pawnee, so it's a straight dance."

Taylor and her sons dance in powwows.

"And I sew a lot for my little cousins, so they are able to dance also," she said.

She said she sews a lot of traditional powwow regalia.

"Mostly, they're the traditional ribbon skirts," she said. "They can be very elaborate skirts for women to wear, either dancing or doing ceremonies for the women and girls."

Sometimes, she just gives her skirts away.

"I'll see a little girl at a dance and they might not have a skirt," she said. "If I have one in my car, I'll just go give them a skirt so they'll feel like they're being involved, also."

"For college, at Bacone. We love the community. We made really good friends here. My father-in-law and mother-in-law worked at Bacone."

"The different events. We go to the concerts over at the Civic Center. All the events at the Civic Center, my kids love going to. We love the school system, we stay in tune with that. My son likes all the sports opportunities he gets to do."

"I don't know if anyone notices the paintings on the fire hydrants. I would love to have more free painting opportunities for people to express themselves, even like an open paint for people."

"Mandy Scott. She owns Harmony House. She took it over, four years in September. We met working at the high school in the JOM department. She has been like my mentor. We both had the same dream about opening our own restaurants. She learned that I made cakes. She kind of took me under her wing. When she bought this place she wanted me to come with her."

"Probably meeting my husband. We met when we were in school at Bacone. We got married in the Bacone Chapel. We started our family here, and we love the community."

"I like painting and drawing, going to Honor Heights Park, walking on the trail there. My kids love going to Civitan Park. Going to the Rollie Pollie Ice Cream Shop.