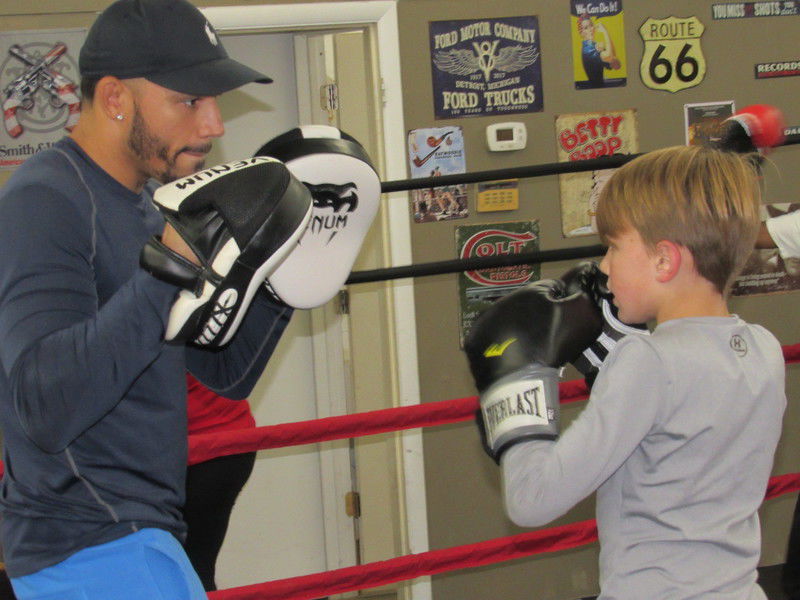 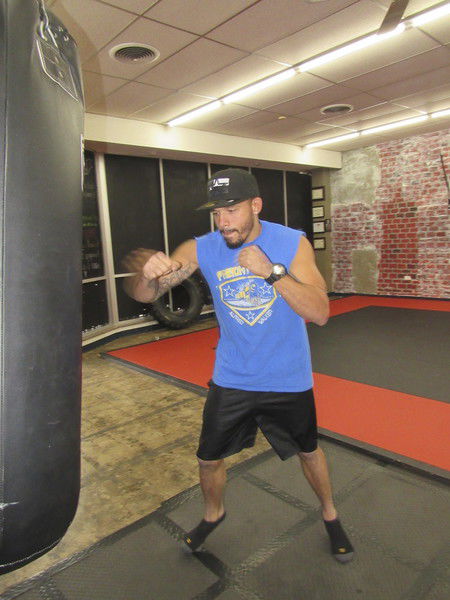 Alfred Walker jabs at a punching bag during a class at Soaring Eagle Fitness. 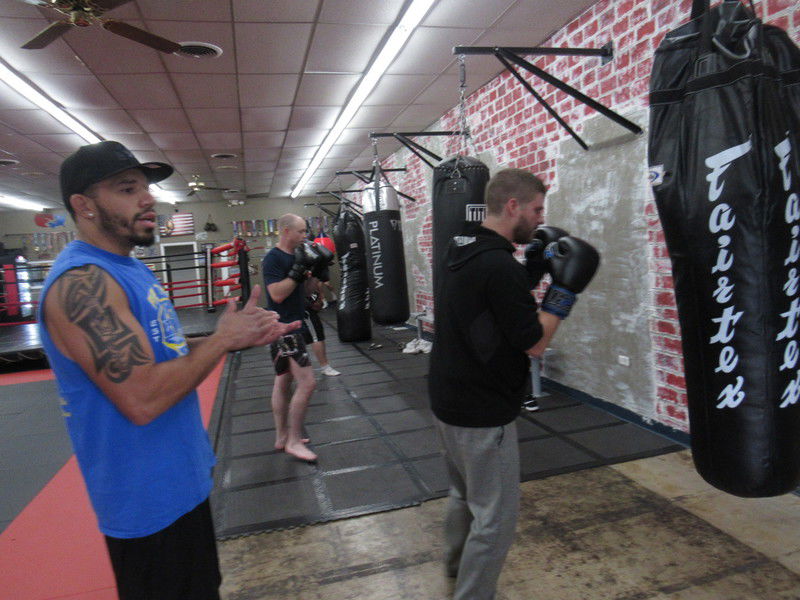 Alfred Walker, left, claps a beat during a kickboxing class he teaches at Soaring Eagle Fitness.

Alfred Walker jabs at a punching bag during a class at Soaring Eagle Fitness.

Alfred Walker, left, claps a beat during a kickboxing class he teaches at Soaring Eagle Fitness.

"It's saying we fight until Hell freezes over, then we fight on ice," he recalled. "There's no quitting, no stopping. We're going to fight until our last breath."

Walker recalled hanging around with the "wrong people" when he was a youngster. He said he got into a fight his first day of school as a Muskogee High School freshman.

As the year progressed, however, Walker got involved in the MHS wrestling program, eventually working his way up to State competition.

He earned a wrestling scholarship at Neosho County Community College in Chanute, Kansas, but did not go to college.

Walker worked at Georgia-Pacific, then at the Dal-Tile manufacturing plant.

After five years, a friend at Dal-Tile got him interested in professional fighting.

"He got into a gym, Hooligans, and told me to check it out," he said.

Walker worked at the Port of Catoosa for four or five years before taking a job with a railroad.

"After a year and one day, they furloughed me," he said.

But, Walker didn't give up.

"I looked around for anything I could do on my own," he said. "I thought about doing car washing, but there are so many people out there washing cars. But I though about washing houses. Not too many people washing houses, doing parking lots, roofs."

Walker said he opened his powerwashing business in September.

He recalled sitting in on wrestling practice as a freshman, but could not take the class because of a scheduling conflict.

"Coach Bobby Jefferson told me that if I came every day after school, when the semester was up, he would get my fourth-hour changed," he said, adding that having a coach became a big factor in his life.

Before he wrestled he never played sports.

"I started wrestling, he gave me an outlook on my life, gave me something to look forward to," Walker said, recalling Jefferson's influence.

"My first year I sucked," Walker said. "I don't think I won a single match my freshman year. My 10th-grade year, I think I made varsity. My 11th-grade year, I was beating guys who had been wrestling their whole life."

He said he was ranked second in the state at one time during his senior year. However, he said he "kind of went downhill" after a midseason injury.

"I made it to the regional level, but I choked at state," he said.

A bout with a professional kickboxer sparked Walker's kickboxing career. The pro was helping a friend at the gym and Walker recalled putting his gloves on.

"And I kind of got the better of him," he said. "I thought if this guy's competing and I'm just in off the street, I should be able to do it myself. One thing led to the next and I kind of got to training."

Within three months, Walker had his first amateur fight.

He recalled taking his first professional fight after an eight-hour notice.

"I faced a guy who had 200 fights, and his professional record was 4 and 0, all knock-outs," he said. "I was the first person to take him to a decision."

He said he originally considered pursuing mixed martial arts, which features techniques from wrestling, jiu jitsu and other disciplines.

However, he eventually concentrated on kickboxing, which involves punching, kicking and knee work.

Walker said a lot of people from Muskogee and Tulsa have supported his fights. His latest fight was last August.

Walker now passes his experience on to others.

He began a youth boxing class that has attracted seven youth between ages 7 and 15. Teaching it has been a challenge, he said.

"I like to focus. I like them to be focused on what we're doing," he said. "If they're playing around, I don't feel they're focused."

Walker said he calls students out if they're not focusing.

However, he said he loves seeing "the excitement in their face" when they learn something.

"I have to counsel and explain to them 'don't give up,'" he said.

He recalled one young student who was having trouble doing five push-ups.

"He only did three, and I went over there and talked to him and gave him encouragement," Walker said. "He sucked it up and he knocked out his two push-ups. He was excited about it and he was like 'man, I couldn't do it.' And I said, 'yeah, you've done it.'"

Walker said also he is working one-on-one with a 3-year-old who has autism.

"At first, I was a little worried if he was able to focus," Walker said. "I show him what I want him to do. I take his hands and do punching, then I let him do it. He's grasping it. He's taking it in."

"I really never left. I worked in Catoosa, but I stayed in Muskogee. I don't know why, I just can't get away. I have family here. This is all I know. And this is where I'm comfortable. My mom and dad are still here, and my brothers."

"Small town. Everybody knows everybody. It's home."

"The support system here in Muskogee is iffy. If it was a little better it would make a difference. When entertainment comes to town, you don't have a lot of people to come out. You have a show in Tulsa and they get thousands coming out. The same people come to Muskogee and only a certain few would come out."

"Bobby Jefferson and Ty Pilgrim. Pilgrim helped me grow as a fighter and as a man, as well. He's the Hulbert head football coach. He was Muay Thai coach, or kickboxing coach. He helped me see things differently. He explained dynamics of why things worked. Bobby Jefferson, from 10 or 15 years ago, everything he instilled in me is still with me every day. It's like it was yesterday I was wrestling for him. The Ice Fighter mentality is still there."

"I fought this guy in Tulsa, and he cheated. I got to fight him again here in Muskogee at the Civic Center. That was an exciting night."

"Right now, look for work. When I'm not in the gym training, I'm out there looking for clients for my powerwash business, or getting a hold of my kids. Trying to figure out my next plan."

"Muskogee has a lot of potential. It could be a better town if people came together. There's not a lot of crime, so that's a good thing."

HOBBIES: Spending time with the kids, fishing, hanging out with family, fighting. "I don't like TV. If I'm watching it, I'm watching the fights, karate movies."