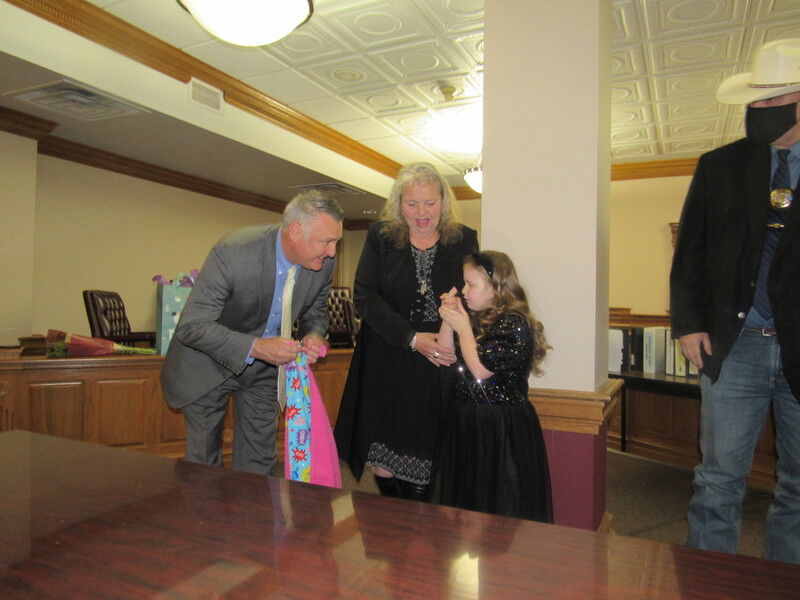 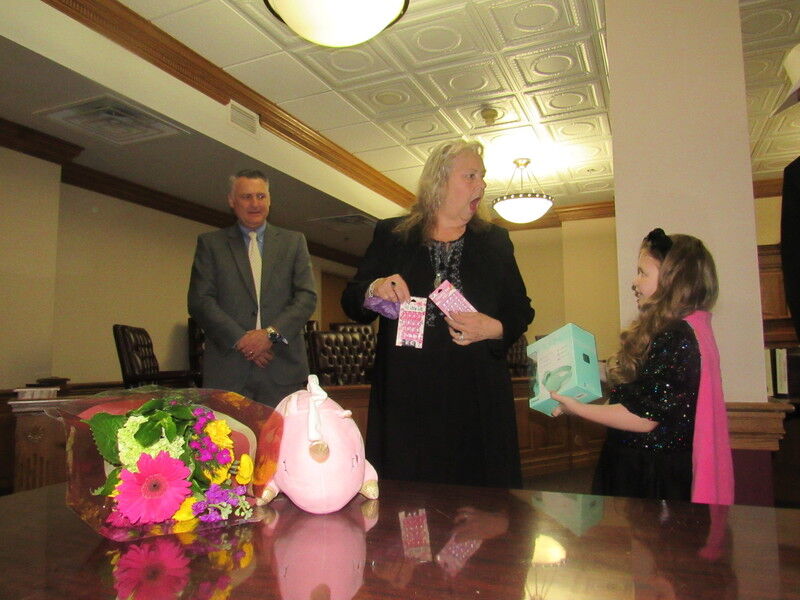 Pamela Shoemaker, center shows surprise at all the gifts her 8-year-old granddaughter Aubrey Sherman received in a gift bag, while Muskogee County District Attorney Orvil Loge watches. Loge and other law enforcement officials presented Aubrey with the gifts and a TinySuperheroes cape on Friday morning.

Pamela Shoemaker, center shows surprise at all the gifts her 8-year-old granddaughter Aubrey Sherman received in a gift bag, while Muskogee County District Attorney Orvil Loge watches. Loge and other law enforcement officials presented Aubrey with the gifts and a TinySuperheroes cape on Friday morning.

"It's awesome," Aubrey said as she modeled how the pink cape matched her black sequined dress.

Aubrey, 8, has had to show superhero perseverance. Last year, right when the COVID-19 pandemic hit the United States, the girl was diagnosed with hypogammaglobulinemia, which damaged her immune system.

On Friday, Loge and other Muskogee law enforcement leaders presented Aubrey with gifts and a pink cape through the Tiny Superheroes program. The program seeks to empower children facing serious diseases or disabilities.

"This is very special for us," Loge told the child. "We thank you for coming, you are our hero for today. You have a great day."

Muskogee County Sheriff Andy Simmons read a statement saying "despite her daily battles, Aubrey is a star student who always has a smile on her face and never lets a challenge go undefeated."

Her smile shined even brighter when she pulled a pink stuffed animal, pastel green headphones and other goodies out of a gift bag.

But even that wasn't Aubrey's favorite part of the day.

"Today is so happy because I get to be with my family," she said.

Aubrey's grandmother and guardian Pamela Shoemaker said it was incredible for the child to be recognized.

She said the girl must get blood infusions once a month. They take a long time.

"We started out at five hours, but we're down to three or four hours," Shoemaker said. "She just had one this week."

Aubrey already must wear braces because her low antibodies have affected her teeth, the grandmother said.

"We pretty much keep her at home," Shoemaker said. "Occasionally, we will take a trip to Walmart to get a toy."

Shoemaker said they usually pick up their groceries curbside, however.

"We pretty much have been isolated the past couple of years," she said.

Recently, Aubrey has been able to find safe ways to meet with friends.

"She's in a corner in a classroom, where she's not exposed, but she interacts with my third-grade students," Shoemaker said.

Shoemaker said it could take a year before infusions could make a difference.

"We have two more treatments, and in a year we will evaluate it," she said.

Aubrey's aunt, Madison Shoemaker, said a member of the community nominated her for the TinySuperhero campaign. The family raised $50 for the cause.