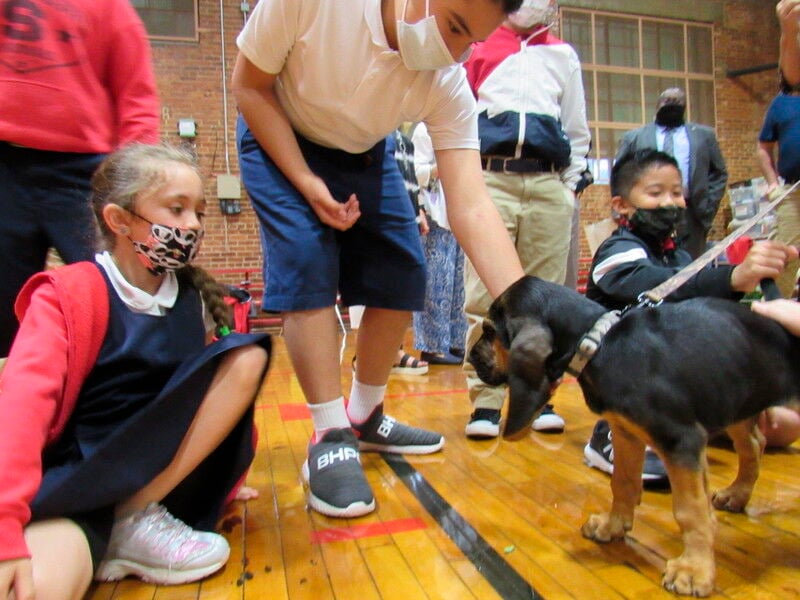 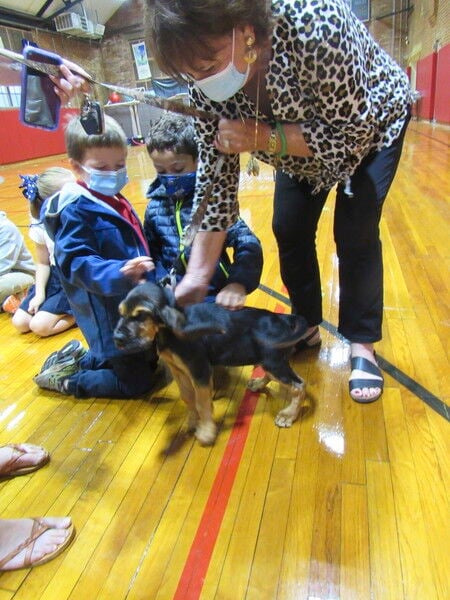 Muskogee Police Department's bloodhound puppy, Tracker, lived up to his name as he sniffed around the St. Joseph Catholic School gym Tuesday morning.

Perhaps the pup was sniffing out which class gave him that name.

Muskogee police asked students at Muskogee Public Schools, Hilldale and St. Joseph to name the bloodhound, which will be trained to help police find lost people.

Third-grader Ava Gonzales credited her classmate, Josef DelaCruz, for coming up with the name.

"Josef was the one who wanted to name him Tracker," Ava said. "I was sick for that day and I thought Tracker might be good because he tracks things down, so the whole class came up with Tracker. A couple of days later we heard on our little radio thingeemigbobber that the third grade had won. We started jumping up and down saying we knew Tracker would work."

Josef said, "I thought of Tracker, because he can track clues."

However, Teehee said police chose Tracker because that's exactly what he's going to do.

"If someone has kind of lost their senses and can't find their way home, Tracker's going to have the ability to find them," Teehee said.

Tracker also will be able to track down lost children, he said.

"It's very important we have all our community support for what we're doing  in the police department," he said. "Maybe a year from now, we'll bring Tracker out and show you what he can do."

Muskogee Police acquired Tracker earlier this month after making an application to the Jimmy Ryce Center. The center is a Florida agency that offers bloodhounds to law enforcement agencies, so the agencies can find abducted or missing children.

Teehee said police will train Tracker to help rescue missing children, as well as adults in danger. He said the death of a missing Muskogee man in February prompted police to get a bloodhound.

According to police reports, Gordon Hughey, 78, who suffered from dementia, wandered off from his home sometime in the early morning hours of Feb. 10. His family reported him missing, a Silver Alert was issued, and a grid search was started.  He later was found dead a short distance from his home.

Tracker will not be used in tracking or apprehending criminals, Teehee said.