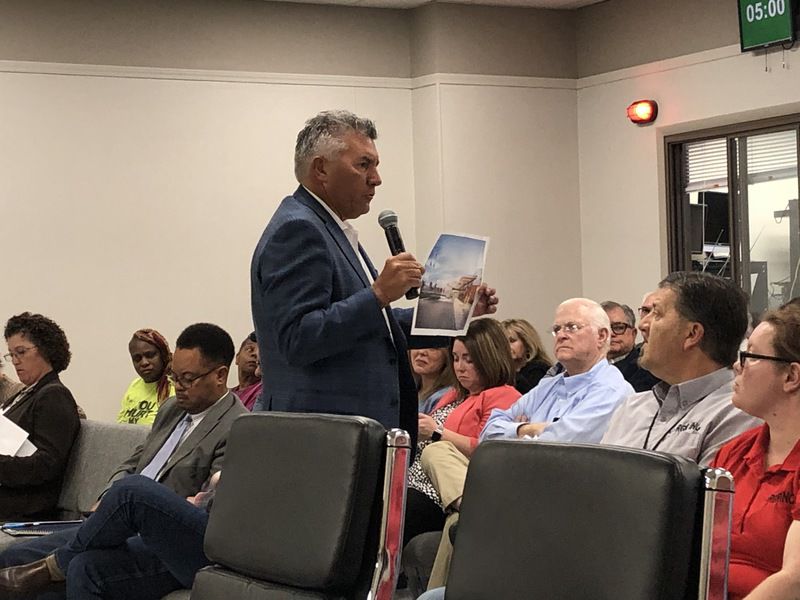 Richard D. Baier of US Federal Properties Co. LLC presents an architectural rendering of a renovated west wing at Arrowhead Mall during a Muskogee Urban Renewal Authority meeting. The company requested an amendment to the 1984 urban renewal plan that would allow a change of use to accommodate the proposed relocation of  the VA Regional Office. 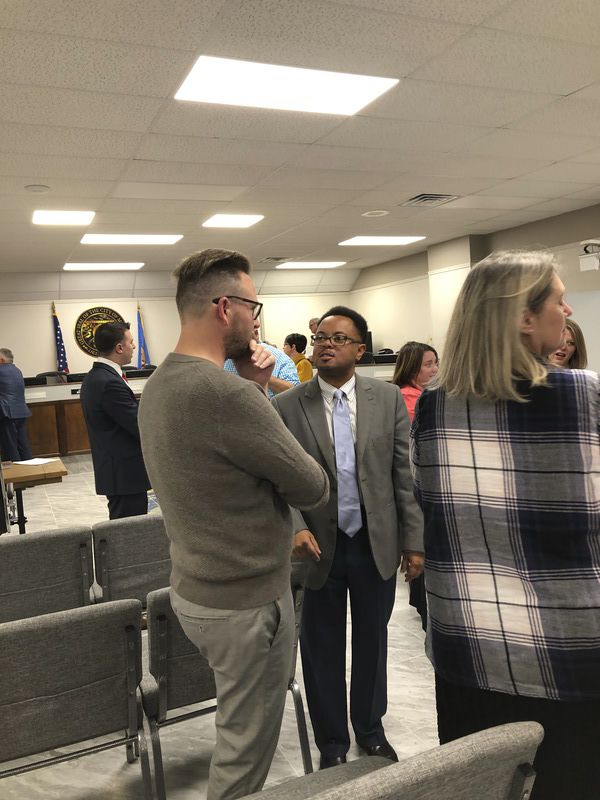 Ward IV Councilor Marlon Coleman, center, talks with a constituent Wednesday following a meeting of the Muskogee Urban Renewal Authority, which considered a request to amend a 1984 urban renewal plan to accommodate the proposed relocation of the VA Regional Office to Arrowhead Mall.

Richard D. Baier of US Federal Properties Co. LLC presents an architectural rendering of a renovated west wing at Arrowhead Mall during a Muskogee Urban Renewal Authority meeting. The company requested an amendment to the 1984 urban renewal plan that would allow a change of use to accommodate the proposed relocation of  the VA Regional Office.

Ward IV Councilor Marlon Coleman, center, talks with a constituent Wednesday following a meeting of the Muskogee Urban Renewal Authority, which considered a request to amend a 1984 urban renewal plan to accommodate the proposed relocation of the VA Regional Office to Arrowhead Mall.

Urban renewal commissioners on Wednesday rejected a request to amend a plan that would allow the now-shuttered Dillard's at Arrowhead Mall to be converted from retail to office space.

The request was made by US Federal Properties Co. LLC, which is competing for an opportunity to accommodate the proposed relocation of the VA Regional Office. Richard D. Baier, a principal of the company, said he expected the company would be awarded the lease for the proposed site before year's end if commissioners approved the requested amendments to a 1984 urban renewal plan.

Commissioners, after fielding comments from the owners of downtown properties and businesses and others who objected to the changes, denied the company's request. Commissioners found the request failed to meet three key objectives required by the urban renewal plan as amended in 1984, which provided for the construction of Arrowhead Mall.

Baier said the company, which has an option to buy the former Dillard's location, would renovate the existing 75,000 square feet and build an additional 90,000 square feet to accommodate VARO's proposed relocation. The company's proposal, one of at least two known to have been solicited by the U.S. Department of Veterans Affairs, includes a renovation of the mall's west wing, new landscaping and 350 parking spaces.

Baier said VA officials liked "the renovation of Dillard's because they can get all of their employees on one floor." He said the one-story design prevents "duplication" and the need for "multiple conference rooms, copy machines, IT rooms, lunch rooms, all of that type of stuff they can utilize for effective office space."

Assistant City Manager Gary Garvin said a downtown master plan addresses the prospect of repurposing the mall for other uses that would serve "nontraditional tenants." The proposed relocation of VARO, he said, raises some concerns.

"This will result with the vacancy of a large existing viable downtown building, which is the current location of the VA Regional Office," Garvin said. "Another concern is we feel it would have a negative impact on several new businesses and restaurants that have just recently opened."

Garvin said several downtown businesses opened using money that was "offered by the city of Muskogee to expand or relocate downtown." During the past 18 months, he said, about $500,000 was doled out as incentives to downtown businesses, and 25 grants were awarded to property owners for façade improvements.

Ron Wright, a lawyer who represents the owners of the building leased now by the VA, echoed those concerns. He said the 40 downtown businesses supported by 700 VARO employees "can't survive if these 700 people move to the mall."

"You are talking about substantially disadvantaging a significant portion of the Muskogee economic community for a purpose that may make the VA happy and would make Mr. Bair happy," Wright said. "But this facility, which is locally owned, would be severely handicapped — would be put virtually out of its useful business —and the city would lose economic benefit of retail sales from both facilities for 15 or 20 years."

Ward IV Councilor Marlon Coleman, the only candidate competing in the 2020 elections who attended Wednesday's meeting, also spoke on behalf of downtown businesses and property owners. He said those responsible for the resurgence in downtown business activity are "people who are proud to have Muskogee as a place to live, work and play."

"Their sacrifice of time and money into the downtown area is above and beyond what many are willing to do in a small city with ongoing conversations of how long the economic boom in America will last," Coleman said. "The primary purpose for facilitating an urban renewal area is to assist cities and towns to create retail sales tax revenue, but if that purpose is modified in a way that does not accomplish that, then for us it has no good purpose at all."

Vickie Greer Berner, who owns Mattie Jane's on Main, estimates up to 75 percent of her business can be traced to VARO employees and the clients it serves. Before URA commissioners rejected Baier's request, she said if the regional office relocates to the mall, she "might as well pack it and go home."

"People came together today — everybody here has something invested in downtown," the eatery owner said after the meeting. "That mall failed us once, and it's getting ready to fail us again — I want Mattie Jane's to stay right where it is."

While the request to change the use at the mall was denied, it was unknown how many more proposals were submitted and are being considered by the VA. Coleman said he hopes federal officials will "reconsider any attempt to relocate and offer some alternatives ... so we can be in a partnership that helps the VA and keeps our downtown businesses alive."