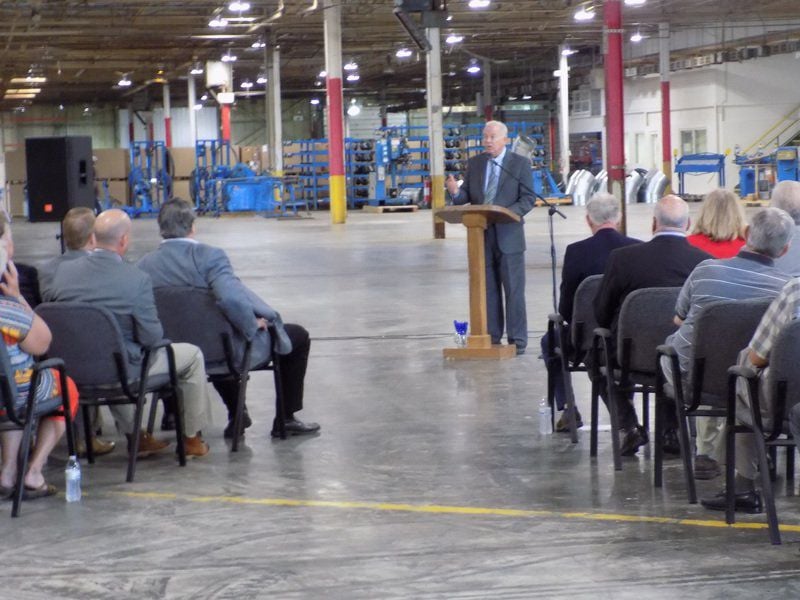 Ray Yeager, president and CEO of DMI Companies, addresses an audience of local and state officials along with company representatives Tuesday morning during a ribbon cutting ceremony. The company plans to start production by late this year or early 2018. 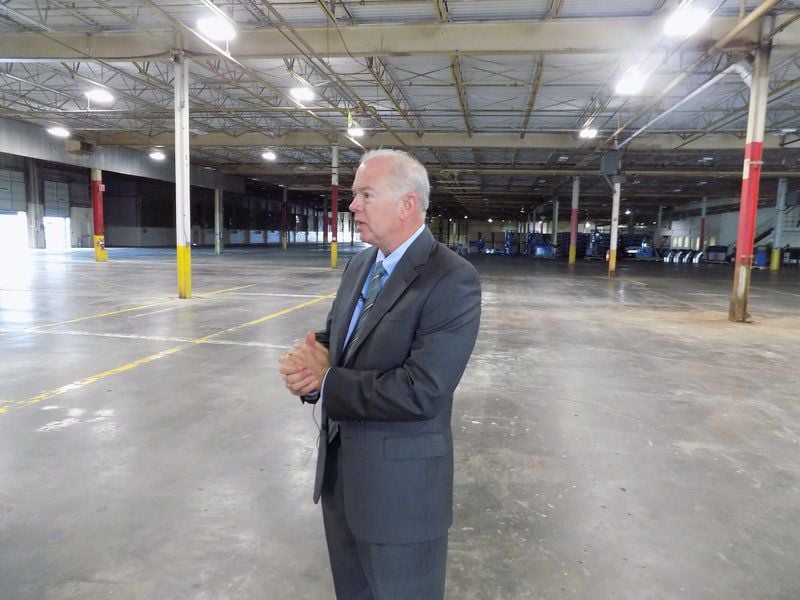 DMI Companies President and CEO Ray Yeager is seen inside the nearly 200,000-square-foot Wagoner facility the company purchased to use as an HVAC manufacturing and distribution site serving the nation's mid section. The structure has long been vacant and was once housed Prestolite. 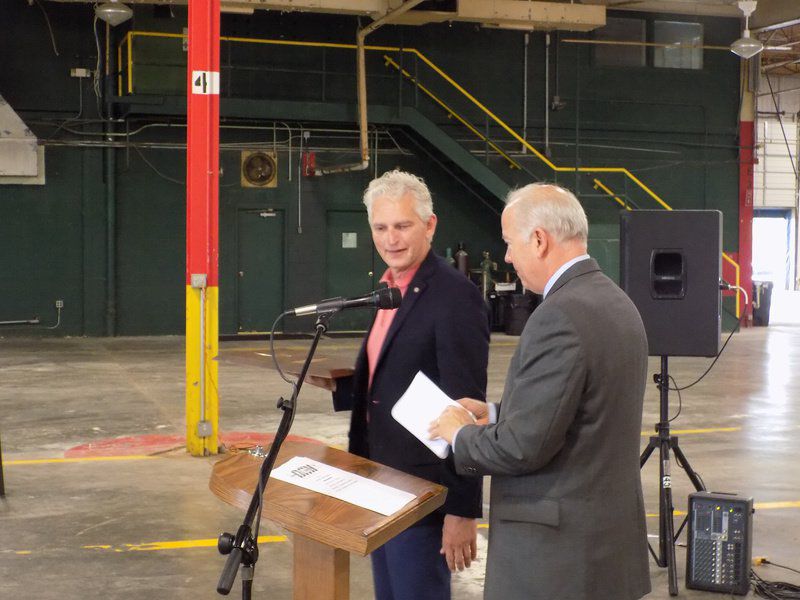 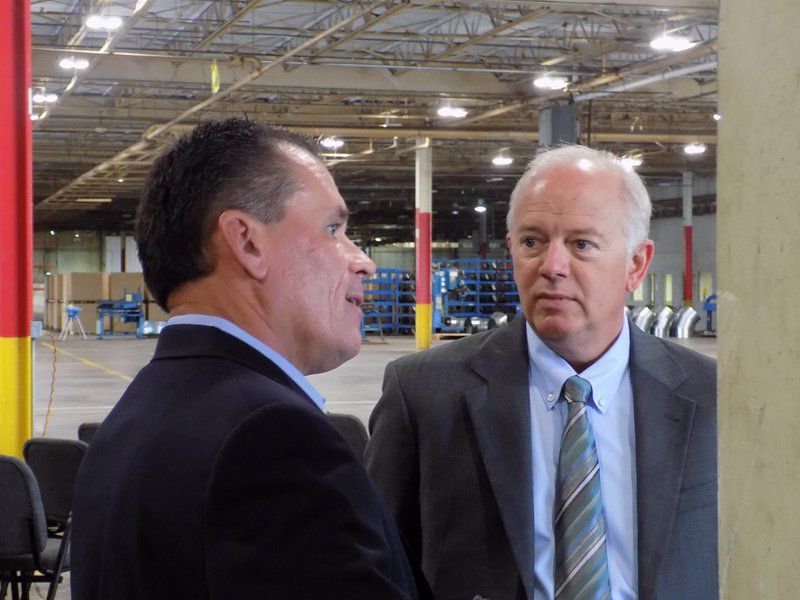 John Chandler, with the Wagoner Economic Development Authority, right, visits with DMI President and CEO Ray Yeager Tuesday after a ribbon cutting ceremony for the company's Wagoner manufacturing plant. Chandler said local officials anted up $400,000 in economic incentives to help lure the firm to the city.

WAGONER — Community leaders and officials from one of the nation's largest heating and air conditioning manufacturing firms on Tuesday celebrated the kickoff of what both parties hope will be a long relationship.

Ray Yeager, president and chief executive officer of Pittsburgh, Pennsylvania-based DMI Companies, said the company is making about a $4.5 million investment in the facility at 300 South East 15th St. He said the 200,000-square-foot facility will serve both existing company customers and help it secure new ones in the nation's midsection from South Texas to Chicago and hundreds of miles east and west.

"It is a long-term commitment to the community," Yeager told a crowd of about 80 people.

Among the work done was an estimated $2 million roof repair job, officials said. John Chandler, with the Wagoner Economic Development Authority, said that entity and the county provided about $400,000 in incentives to help with the roof repair work to make the company's purchase viable.

"We knew that to get a company to come to this facility, while the building wasn't overly expensive, the scale of issues with the roof were substantial, so we knew there was going to have to be some level of incentive to make it viable," Chandler said.

Jim Igarta, economic developer with the authority, said the value of the renovated building now far exceeds the money put into the effort.

Yeager said he expects operations to start late this year or very early in 2018. The company uses high-tech manufacturing methods, including robotics and lasers to produce a variety of products used in the the HVAC fields.

"That means while we won't have a large number of employers, our staff is trained and well paid," he said.

The plant is expected to bring about 20 new jobs to Wagoner after one year and 60 after five years, Yeager said.

"This will be our second largest facility when its fully operational," said Doug Gudenburr, DMI director of operations. "It's going to be pivotal in integrating all of our facilities, so we're supporting each other."

Gudenburr said the Wagoner plant will help relieve production at other plants now operating at capacity. He said the company looked at numerous locations before deciding on Wagoner.

Yeager said the company's values include efforts to enhance local schools and education by providing opportunities for students to come into DMI facilities to see the manufacturing environment firsthand. The firm's employees are known for partnering with schools and providing internships.

"Our culture is one of continuous improvement and change," Yeager said.

Wagoner Mayor Albert Jones said reaching the point of Tuesday's ceremony was about a year in the making. He said the Wagoner Economic Development Authority, the Oklahoma Department of Commerce, the Grand River Dam Authority, the city and Wagoner County officials pulled together to make the deal work.

Jones said part of the process was a visit to DMI headquarters in Pittsburgh where he was thoroughly impressed with the quality of the company and its workforce.

Jones said the effort began in September 2016 when Gary Chappell, who works at a DMI distribution facility in Tulsa, came to him and mentioned the company was looking for a new centrally located plant. Chappell and Jones knew each other from when they went to high school together.

Chappell said the Tulsa facility will be consolidated into the new Wagoner plant in coming months.

Oklahoma State Sen. Kim David said she was proud to have been involved in the state's effort to lure and secure the location of the plant.

"I"m so impressed," David said of the community-wide effort to work together to lay the ground work resulting in securing a commitment from the company.

DMI plans to use the Wagoner property for manufacturing all five of its product lines — Ductmate Industries, Aire Technologies, GreenSeam Industries, Linx Industries and CL Ward.

The Wagoner site will be the first DMI manufacturing facility to house operations for all five of its subsidiaries in one location, company representatives said.