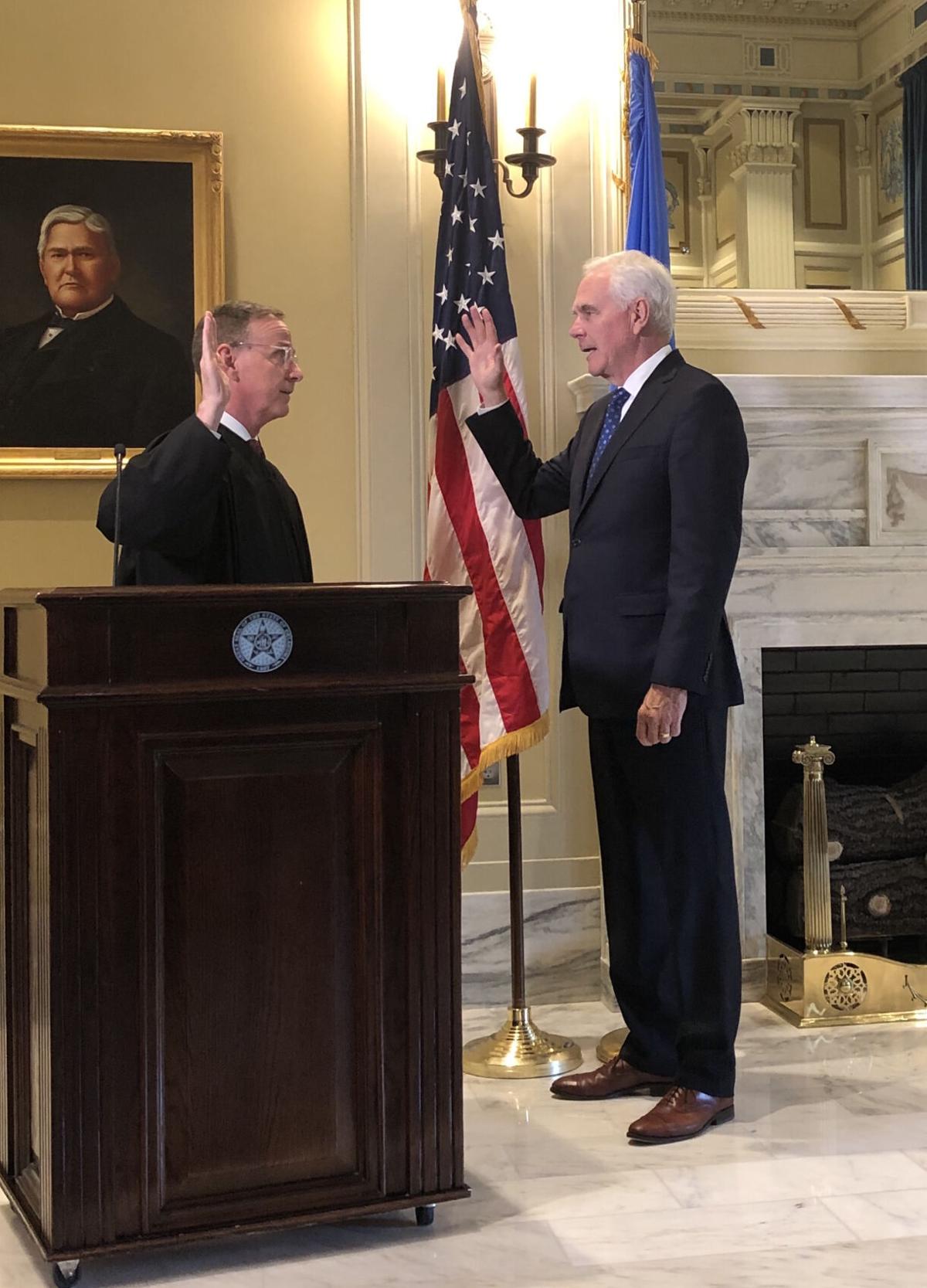 John O'Connor, right, is sworn in as attorney general by Oklahoma Supreme Court Justice M. John Kane IV on July 23 at the state Capitol. Gov. Kevin Stitt appointed O'Connor to the role following the resignation of his predecessor. 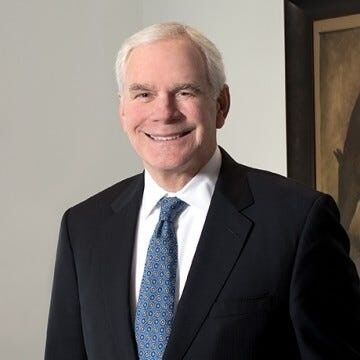 John O'Connor, right, is sworn in as attorney general by Oklahoma Supreme Court Justice M. John Kane IV on July 23 at the state Capitol. Gov. Kevin Stitt appointed O'Connor to the role following the resignation of his predecessor.

OKLAHOMA CITY — John O’Connor remembers sacrifices his parents made to give their six children a foundation for success.

His father worked nights as a machinist for the Frisco Railroad, while his mother stayed home. Neither had a college degree, but prioritized giving their children access to the best schools they could afford in Tulsa.

The six siblings later put themselves through college at Oklahoma State University. O’Connor went on to get a law degree.

“When you see your father go to work every day on the railroad, you never forget the motivation, just what the grind of physical labor does, going out into the weather,” O’Connor said. “You sort of grow up saying, ‘I’m never going to be in that situation if I can help it.’ ”

O’Connor, 66, said he’s long aspired to become the state’s top law enforcement officer because of a passion for public service. But he and his wife, Lucia, of 43 years, decided they first needed to prioritize raising their own four children.

With their children now grown and married, O’Connor, a Tulsa native, said he jumped at Gov. Kevin Stitt’s offer to be the state’s next attorney general following the abrupt resignation of his predecessor, Mike Hunter. Stitt and O’Connor have known each other for decades, but O’Connor said Stitt still quizzed him about his “competence and character and faith” and his willingness to communicate even if they disagree.

A litigator for 40 years, O’Connor said his instincts regarding strategy have become second nature, and he said he believes he’s as grounded as anyone can be taking over the helm of a state office with a $67.5 million budget and 171 employees.

He admits, though, that he’s coming to the role during a period of turmoil and uncertainty, with a number of controversial issues facing the state.

Since his July 23 appointment, O’Connor has been battling tribes and the federal government over sovereignty issues.

He’s also seeking to resume executions for the first time since 2015.

He’s fighting to defend a controversial school-masking ban that critics say strips away local control from school boards. O’Connor personally believes the decisions of parents and children should be pre-eminent.

And he’s eyeing an investigation into possible illegal price gouging during February’s winter weather that saw natural gas prices soar and left consumers faced with the burden of billions of dollars in unexpected utility costs.

“The challenges are massive, but every problem has a solution, and we can find them,” O’Connor said.

He said his top three goals are keeping utility bills down, ensuring public safety as the state wrestles with the outcome of the U.S. Supreme Court’s McGirt decision, and fighting to keep the federal government out of Oklahomans’ homes, pocketbooks and schools.

In O’Connor, Stitt has an ally in his ongoing disputes with the state’s 39 tribal nations. O’Connor believes Stitt’s tactic of challenging the expiration of the state’s gaming compacts in a bid to increase the share of what tribes pay was “a logical approach,” even if the tribes disagreed.

Stitt says he’s known O’Connor for years. When Stitt was in his 30s and CEO of a mortgage company, O’Connor invited him to take part in a leadership program that discussed how to balance a business, family and any temptations leaders might face, Stitt said.

“He just has a passion for mentoring and giving back, and he made a huge impact on me when I was younger,” Stitt said.

In 2017, Stitt was secretly mulling a bid for governor when O’Connor invited him to a national prayer breakfast in Washington, D.C. That trip ultimately cemented Stitt’s desire to run for office.

Much like Stitt, O’Connor wants to “vigorously defend the sovereignty” of the state over lands within its borders. He said the balance between tribal and state rights worked for 114 years — until the U.S. Supreme Court decided to “intervene in that relationship and upset the applecart” by ruling that part of eastern Oklahoma remained reservation land.

O’Connor said he’s already reached out to some of the state’s tribes in hopes of discussing solutions to issues important to both parties.

“While we’re arguing and filing pleadings, etc., which we need to do to protect the interests of Oklahomans, we respect our tribal neighbors and their leadership, and we are always open to a solution that we Oklahomans come up with in our own backyard, rather than relying on five people in black robes a long way away,” O’Connor said.

Chuck Hoskin Jr., Cherokee Nation principal chief, said that for more than a century the state illegally operated as though their reservation did not exist. He said the governor and attorney general could work cooperatively to respond to the decision, support public safety and keep Oklahomans safe. Instead, they have actively ignored opportunities for cooperation and are demanding the U.S. Supreme Court overturn its decision and that the U.S. discard its treaty obligations.

“We hope the new Oklahoma attorney general and our governor will stop working to overturn the Supreme Court’s decision and dismantle our reservation, and instead respect our tribes as sovereigns and partners and work cooperatively together,” Hoskin said.

Steve Kunzweiler, Tulsa County district attorney and a friend of O’Connor’s, said someone doesn’t have to spend more than an hour in conversation with O’Connor to know that he speaks with a moral authority that is guided by an adherence to his values of life and justice. Kunzweiler said O'Connor is anti-abortion, and also is passionate about ensuring the rights of individuals who have mental health and drug addition struggles.

Kunzweiler and O’Connor have known each other for more than 20 years and attend the same Catholic church.

But he said O’Connor always attributes all of his success to his wife.

“He is inseparable from his dedication to his wife,” Kunzweiler said of Lucia O’Connor. “And that says more about that man than anything else I can say. He is a family man who exudes it.”

He carries that with him into his work and the courtroom, Kunzweiler said.

“He’s deferential and professional, but I don’t know that I’d want to pick a fight with a guy if I was on the wrong side of that because he’s the type of guy who’s going to back up what he says,” Kunzweiler said.

Kunzweiler brushed off an American Bar Association assessment that questioned O’Connor’s integrity, ethics and legal competence as a “slap in the face to every ethical lawyer out there.”

The American Bar Association issued that assessment following O’Connor’s nomination to a federal judgeship in 2018 by former President Donald Trump. That bid was ultimately unsuccessful.

The group wrote that O’Connor did not have experience trying jury cases, had not appeared often in federal court, and had no discernible criminal experience. They also noted that O’Connor had been accused of requesting excessive fees.

“That assessment of John O’Connor is a crock of fill-in-the-blank,” Kunzweiler said.

O’Connor said his peers in Tulsa would uniformly state that he is highly competent and highly ethical. He said in 40 years of practice, he’s had only two bar complaints, and questioned how a group of out-of-state lawyers who don’t know him could decide he’s unethical and incompetent.

Both excessive billing complaints — one in 1989 and the other in 2012 — were dismissed, according to a notarized statement sent to O’Connor by the Oklahoma Bar Association after CNHI Oklahoma asked him to unseal his disciplinary file. Under state law, O’Connor’s investigations are confidential unless he agrees to make those public.

In the letter provided to CNHI, the general counsel for the state Bar Association wrote that O’Connor is in good standing and has never been subject to disciplinary action, though noted that he’s had the two complaints since 1980. The association’s Professional Responsibility Commission dismissed both, according to the letter.

Janelle Stecklein covers the Oklahoma Statehouse for CNHI's newspapers and websites. Reach her at jstecklein@cnhinews.com.