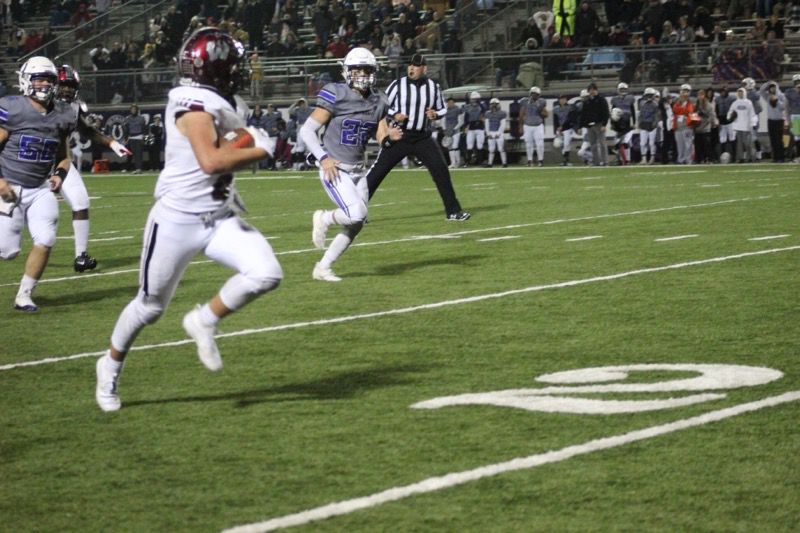 When Braden Drake broke on this and another late TD run to help Wagoner rally past Bethany, he ran himself into a proud football history that includes his recently-passed grandfather and in all, four generations of Bulldogs.

When Braden Drake broke on this and another late TD run to help Wagoner rally past Bethany, he ran himself into a proud football history that includes his recently-passed grandfather and in all, four generations of Bulldogs.

The moments were salve for a wounded heart.

They will go down as part of Wagoner football lore.

Braden Drake’s two touchdown runs, covering 29 and 43 yards in the final 3:21, lifted No. 5 Wagoner past No. 1 Bethany 21-14 in the Class 4A quarterfinals and into tonight’s semifinal opposite No. 2 Poteau at Jenks High School.

On Thursday, the Drakes all gathered for Thanksgiving on a day mixed with practice. There was something, or someone missing.

Drake’s grandfather, John, or “Papa” as he knew him, died Sunday, Nov. 17, losing a fight with pancreatic cancer. Just two days before, he was keeping up with updates of Wagoner’s game with Fort Gibson through Braden’s dad, Roger.

“He couldn’t talk. He would just sit there and listen and you knew he was proud,” Roger said.

John was on his grandson’s mind last week.

“I went in ready to play for him,” Braden said.

He then played himself into the archives of one of the area’s most storied programs.

“The first touchdown, he should have made about 10 yards,” recalled Wagoner head coach Dale Condict. “How he got out of the crowd of people he was in, I don’t know. He broke a couple of tackles, then made a move back to the inside and next thing you know he’s out in the clear and scoring.

“The second one we’re in a kind of a toss-sweep play into our boundary. Bethany had started crowding the line of scrimmage because we were starting to run the ball well. But you go across the line looking at the play and every lineman made a great block, then our fullback, Drew Mills, made a perfect block on the safety that was coming up to make the play.

“When he made that block, Braden was in the clear. There was no one around him.”

Braden remains amazed about how he got out of the crowd on the first one.

“I’m still not sure how it happened,” he said.

That’s what winning programs do, and the Drake family has been a part of that for a long time.

“He was a quick guard,” Roger said. “He said he was always fast and one time I asked him, if that was so, why didn’t he run in the backfield. He told me, ‘Son I didn’t care what I played on offense, I just wanted to hit somebody on defense.’”

Johnny, Roger’s brother, preceded him into Wagoner football in 1979-83, as a fullback and middle linebacker.  He played for future Muskogee coaching legend Ron Freeman, going 12-1 in 1982 where the Bulldogs lost in the quarterfinals.

In the fall of 1985, Roger arrived at quarterback and tailback. In 1987, Wagoner lost in the first round.

“I switched to tailback my senior year,” Roger said. “We were pretty depleted at running back, so I made the move. I also switched to free safety from cornerback.”

He talks about a news clipping from the Wagoner paper someone gave him of the three generations, but minus him. “If you look at that, you’d think I never played,” he said, laughing.

Both brothers would be followed in the backfield by Braden, who also plays outside linebacker.

Braden, Roger and Johnny have established themselves as successful wrestlers. Earlier this year, Braden won a state championship at 120 pounds. Roger was third his senior year. Johnny was a state champion as a senior.

“Ryan Keenom, our new defensive coordinator, was really surprised at Braden on defense, how for a guy that’s not very big and how he brings down people,” Roger said. “He told me it was his first year to coach football at a school where they wrestle and he sees how big a difference it makes in terms of how these guys use their hands and bodies.”

Braden remembers the days from the age of 4, where he’d see his Papa at matches. Braden wrestled before he began football, but just like those football games, there was his Papa, in attendance.

“He was always there watching,” Braden said.

And, he was instrumental in propping up the Wagoner youth football program when it needed it.

“I knew he was involved,” said Roger, who coached his son as well. “But a friend came up and told me how he came up with some substantial contributions and how if not for him, it would have folded long ago. I thought, well, someone would have come along and save it, but that was just him.”

That emotional quarterfinal behind him, Braden now looks ahead.

“It’s definitely my favorite moment so far,” he said. “But our goal is to win a championship.”

They’ll try to take another step tonight at Jenks.

Somewhere, Papa will be looking for updates.