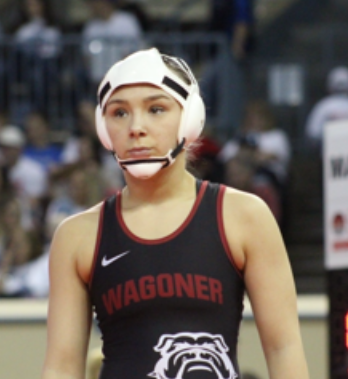 Lexi Miller became Wagoner and the area’s first girls wrestling state champion as the OSSAA introduced it at state this season. 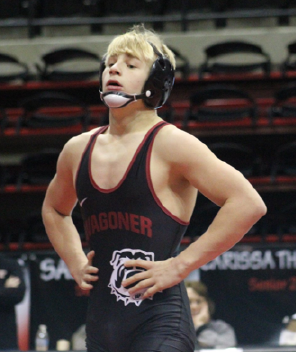 Wagoner’s Braden Drake was a match shy of a state championship, going 33-2 on the year at 132 pounds.

Lexi Miller became Wagoner and the area’s first girls wrestling state champion as the OSSAA introduced it at state this season.

Wagoner’s Braden Drake was a match shy of a state championship, going 33-2 on the year at 132 pounds.

Braden Drake described it basically as a learning experience.

It’ll give him a shot at doing the only thing he didn’t do this year — become a state wrestling champion.

Drake got to the mountaintop, but didn’t get the medal. The Wagoner High junior lost in his Class 4A 132-pound title match to Tuttle senior Dalton Burdick in a 4-1 decision.

It was, he said, like a 180 turnaround from his semifinal match and his regional championship match.

“In the semifinals I was super offensive,” he said. “I didn’t do that in the finals and that was probably what cost me.”

At 33-2, he’s still the Phoenix’s area Male Wrestler of the Year. Wagoner got both honors as Lexi Miller, also a junior, took the first-ever girls title.

“He had a great year,” Wagoner coach Micco Charboneau said. “He kind of didn’t open up on his feet the last couple of weeks. When he does open up, he’s like a water spider, he’s everywhere.”

Drake got a pin in 4:28 of his first match at state against Nathan Dekker of Cleveland and in the semifinals took a 14-5 decision against William Wright of Elk City.

Then after  a three-point loss in the finals, Drake was left second-guessing himself. But, that’s with a point to focus on as he becomes a senior and his only hurdle, Burdick, will have graduated.

“I just got to get past the mental part of just opening up,  and also getting in better shape. The more I open up now, the more tired I get and my tendency then turns  to not wasting my energy the whole time, and I turn defensive again instead of staying aggressive. (Burdick) was a pretty defensive wrestler and never opened up, and it was too late when I realized that’s what I should have done.  So it’s been playing not to lose instead of to win.”

“I think he’ll go (the distance) next year,” he said. “I think losing it hurt him a little bit and it’s bugged him. He’s one that doesn’t say much but you could look at it after it was over and see it bothered him.”

Miller these days is bothered by the fact she’ll miss a overseas trip to Estonia and a wrestling tournament there. She was to leave Wednesday but the event was canceled two weeks ago due to COVID-19.

“It was definitely something I had been looking forward to for a long time,” she said.

Her season’s highlight still won’t be a bad one. She’s the area’s first state champion as the OSSAA introduced female divisions this year.

Up to this year the girls had to wrestle boys. And most of the year she wrestled boys.

Of her 21-12 record, only four matches — three of those at state — came against girls, she said.

“There’s a few boys I beat that nobody expected me to beat and I didn’t expect myself to beat,” she said. “I was content to go wrestle hard and be content with the outcome.

“Since I’m a girl, a lot of the boys don’t expect me to be as physical as they are and I use that to my advantage.”

The kind of reactions she gets varies, she said.

“There’s a few that I’ve competed against for years who respect me and tell me I did a good job,” she said. “I get dirty looks from others and parents too and even experience some name calling.”

She also had forfeit wins — which comes with the territory when you’re facing a guy who has been brought up not to fight girls.

“I had two to refuse to wrestle me because I was a girl,” she said.

Charboneau thinks had she wrestled on the boys side in tournament play, she would have done well.

“It’s no secret to us around here how good she is,” he said. “She’s one of the hardest workers we have.  Part of me thinks she could have been a top five in our region. I’ve seen her beat some good boys.”

Miller’s two pins at state and a 17-7 win in the finals against top-ranked and once-beaten Jordan Blair of Bethel was the biggest accomplishment she’s had since winning the Marine Corps National Folkstyle Tournament in Oklahoma City in 2018 where she was third.

If the OSSAA doesn’t sanction wrestling next season on the girls side (it was non-sanctioned and trial run this year), Miller said she’d take aim at qualifying for state on the boys side. But it is growing, so it’s likely it will continue after discussions with coaches in October.

• Kaden Charboneau of Wagoner, 34-4 and third place at 160 as the top middle weights wrestler;

• Luke Collett of Checotah, 25-4 and third at 120 pounds and the top lighter weights wrestler;

Selections are made by the Phoenix sports department.