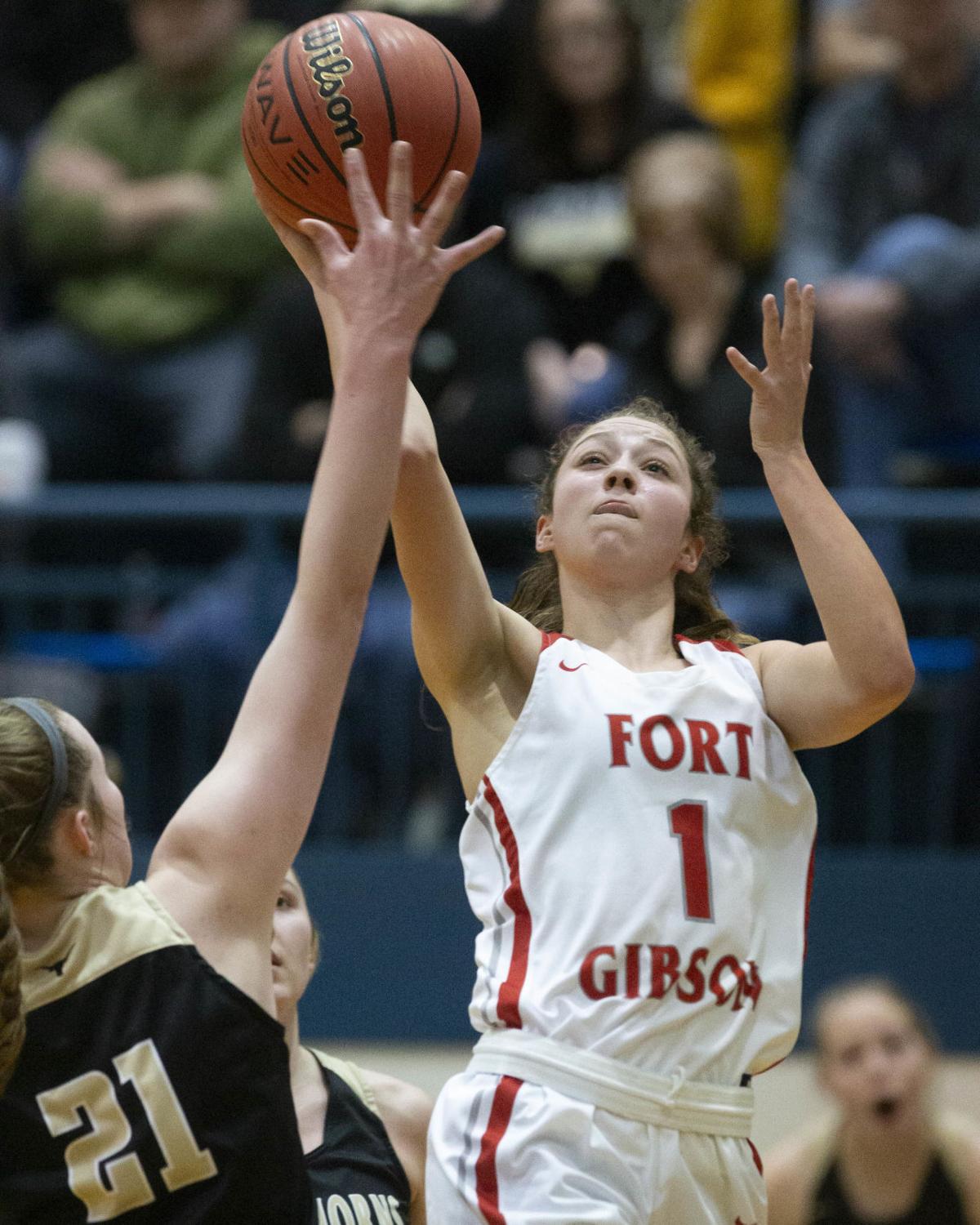 Zoey Whiteley, back for her senior season at Fort Gibson,  goes up for a shot against Inola in a Class 4A playoff  game  last March. 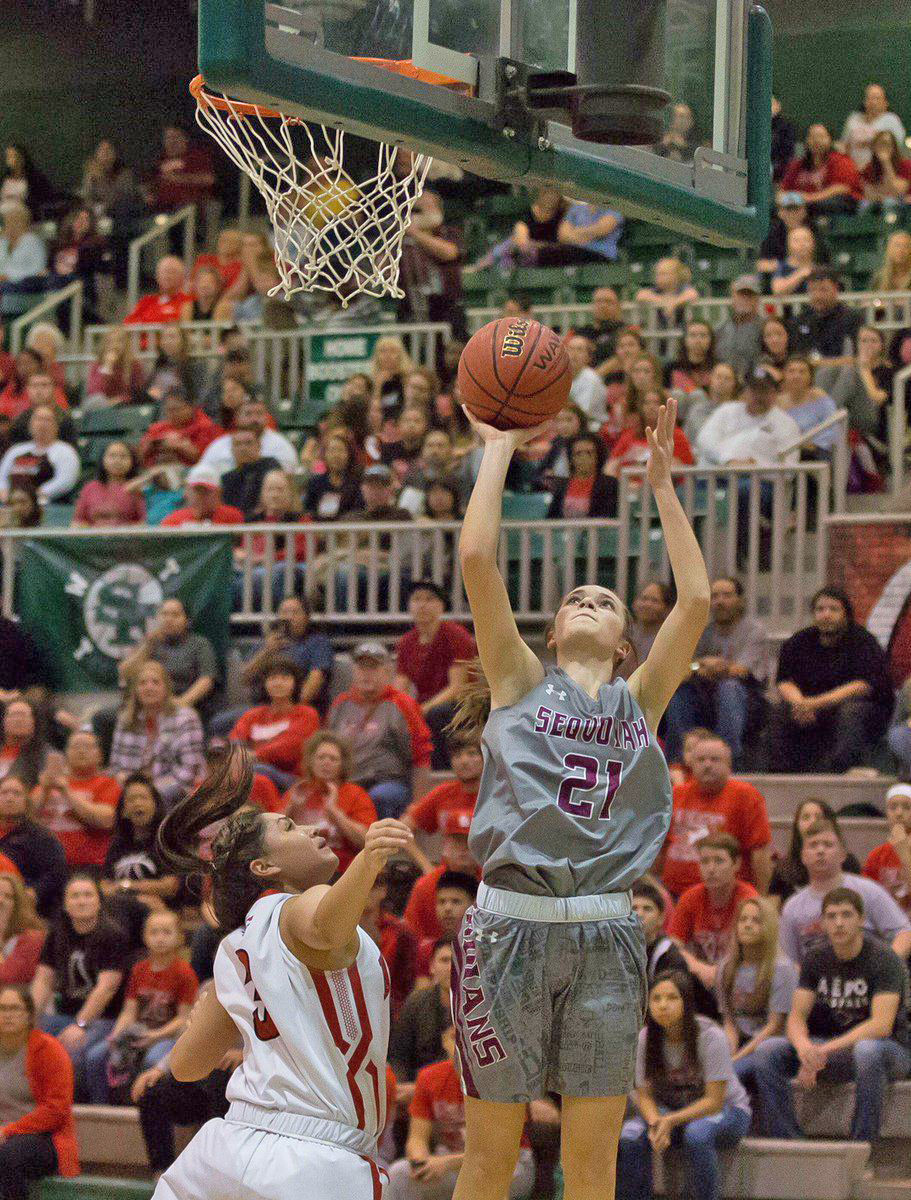 Alexys Keys is a three-time All-Phoenix MVP who is headed for Texas-Arlington after this season.

Zoey Whiteley, back for her senior season at Fort Gibson,  goes up for a shot against Inola in a Class 4A playoff  game  last March.

Alexys Keys is a three-time All-Phoenix MVP who is headed for Texas-Arlington after this season.

At the top, there’s little change, but also, little to distinguish from.

They’re both similar, with key losses at post. They’re both exceptional at the guard spots, and when it’s all said and done, beyond a Feb. 17 matchup to close the regular season, they’ll be vying to each grab their own gold hardware in Oklahoma City.

Fort Gibson is coming off a season more difficult than in recent years, losing in regionals and barely escaping elimination in the first round of area  in overtime before winning three games in three days to reach the quarterfinals and their 15th consecutive state tournament in Class 4A.

One key loss from that 25-5 team was at post in All-Phoenix selection Danielle Johnson.

“We’ll be a different style of team,” London said. “I like what we saw with it going through the summer and so far, building on it since October. I like this group but I’ve liked every one of our groups.”

With 14 straight state trips, the last two of those as head coach after a nine-year run as assistant, that’s more truth than just coachspeak.

Zoey Whiteley, the other All-Phoenix pick, is one in a stable of experienced guards. The 5-foot-8 senior averaged 8.0 points and 6.1 rebounds. Emma Wafford (5-8, senior) and Kynzi London (5-7, junior) are both 3-point shooting guards. London had some key 3s in last year’s area consolation final against Inola.

Reese Webb (6-0, junior) is a third-year regular who can play any position on the court, including guard.

“There were times we could see her doing more, but like I told our assistants, we were still last year talking about a sophomore,” London said. “But she’s a junior now and those expectations are definitely higher.”

Mallory Baker (5-8 senior) and Baylee London (6-0, senior) return at forward. The oldest of the head coach’s daughters averaged 8 points a game. Baker (5.2 points, 6.4 rebounds) along with Webb will be able to slide over into a post role given the need, as will a very long 6-2 junior off the bench in Lexi Foutch.

“We like the ingredients, we like the parts we have, and when it is all said and done, we feel like we’ll have a lot of options,” London said. “Last year at this point we were returning very little experience. Now we have four seniors who will be contributing heavily to our success.

“The senior class has been a big part of our team and I like their leadership and work ethic.”

They also are quite familiar with the tradition of this program, and fought their way off the edge last year to maintain it.

For Sequoyah, 23-5 last season, it’s about three-time MVP Alexys Keys and supporting parts. Had it not been for a thumb injury that slowed the Texas-Arlington commit in last year’s semifinals, the Indians would have no doubt won their third consecutive state title, matching the program’s 2005-2007 run. Adair, a team they beat three times, twice in the playoffs by double figures, pulled away from Christian Heritage, which edged Sequoyah in the semis by a basket, winning 47-35 in the 3A title game.

The 5-foot-9 Keys, who has been resting an ankle injury, averaged 20 points, is the key, not just in skill set but also feeling more free to lead as a senior — something Callison saw coming as he left.

“Not being here then I can’t comment on that specifically,  but you’re naturally going to let those seniors lead and it is now a team she’s kind of taking the reins of,” Brown said. “But at the same time there’s other seniors in there who have contributed a lot over the years and trust me, they all have the drive to want to see their season end with a win.”

While they are more like Fort Gibson in terms of lacking a true post, Jordan Gann, a 5-9 junior will plug that hole at times. She’s not as big as the graduated three-year starter in Jonia Walker, but she’s strong. Alexsyah Goudeau is an up and coming 5-10 sophomore guard.

Here’s what to look for at other locations. Aside from Braggs, most area schools begin play at the end of this month and early December.

Jim Glover’s squad had a resurgence last year behind Olivia Clayton, reaching the area tournament for the first time since 1997 in 4A. The 6-2 senior forward who signs with Tulsa this week averaged 12.9 points and 7.6 rebounds in getting All-Phoenix honors, and returns along with the other half of a 1-2 punch. Vanessa Henson, a 5-9 junior forward, also shined a year ago averaging 11.5 points and 6.6 rebounds.

Jerry Ward’s Warriors lost two key starters from a B quarterfinal team but gets back five experience contributors from that group, starting with All-Phoenix Newcomer of the Year Samantha Shanks (17.4 points, 6.7 assists, 4.5 steals), who will carry a bigger load as a sophomore.  Two move-ins, Cessna Kimberlin and guard Brooke Wyatt, are sophomores.

Four starters from an 8-16 team in 3A are back on an athletic team with strength down low. Kahleisha Wright averaged 8.9 points last year as a freshman. Greenlee Wells averaged 6.7 as another freshman, at forward. Hope Salcedo, a guard, adds senior leadership and a 6.7 average. It’s all orchestrated by senior point guard Kaylee Teehee and overseen by first-year coach Tina Ramos.

The key loss was All-Phoenix post Macayla Needham off a 21-6 team that reached the 3A area consolation semifinals.. What’s left is guard heavy, led by senior Jordan Jones’ 7.8 scoring average. Ashley Mills is a swing guard/forward who can score (6.8) and rebound (5.3).

Like the boys, the girls have a new mentor, both inheriting two-win teams.

Mallory Barrett got Newcomer of the Year consideration a year ago averaging 10 points a game for the Panthers, who return four starters off a 14-10 team in A. Savannah Macom (5-8, senior) averaged 11.3 points and 6.3 rebounds.

Alex Chandler averaged in double figures a year ago on an eight-win team.

Megan Hawkins, a 5-6 senior, and Frankle Clarke, a 5-7 senior, both return averaging just three points per contest. Hope comes from volleyball where Marlee Medlin comes out this season after an All-Phoenix year there. Also, another volleyballer, Jackie Edwards missed last season with a torn ACL.

John Mayes takes over the Lady Pirates and has the athletic Taylor Short, an All-Phoenix fastball selection, as his top returnee, from a 5-16 team.

The Tigers, 8-14 in 2A a year ago, have had a few tough runs. But this group returns some established scoring punch in juniors Grace Pendley and Karley Fewel with 14- and 10-point averages, respectively.

The Haymakers, 13-15 a year ago in 3A, eliminated in first round of area, return Sherri Mason as its top player from a year ago.

Jeff Walker’s squad will be led by two sophomores, Brittany Welch, who averaged 10 points per contest, and Charmayne Marshall, who averaged 4.8 points. The Pirates return every starter, but have room to climb from last year’s 2-22 mark in 2A.