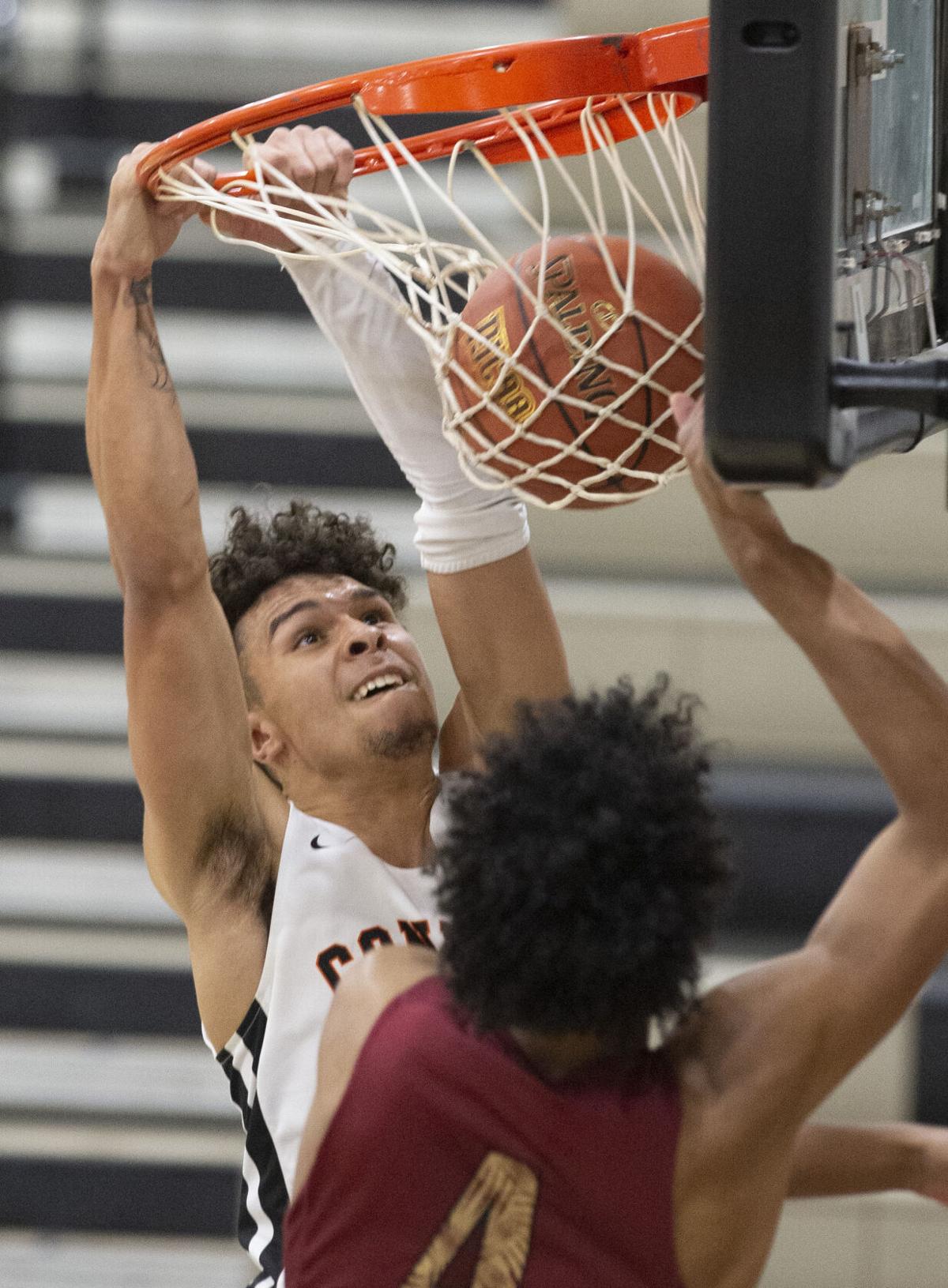 Connors State’s Xavier Glenn dunks the ball and is fouled by a Redlands  defender on Thursday. 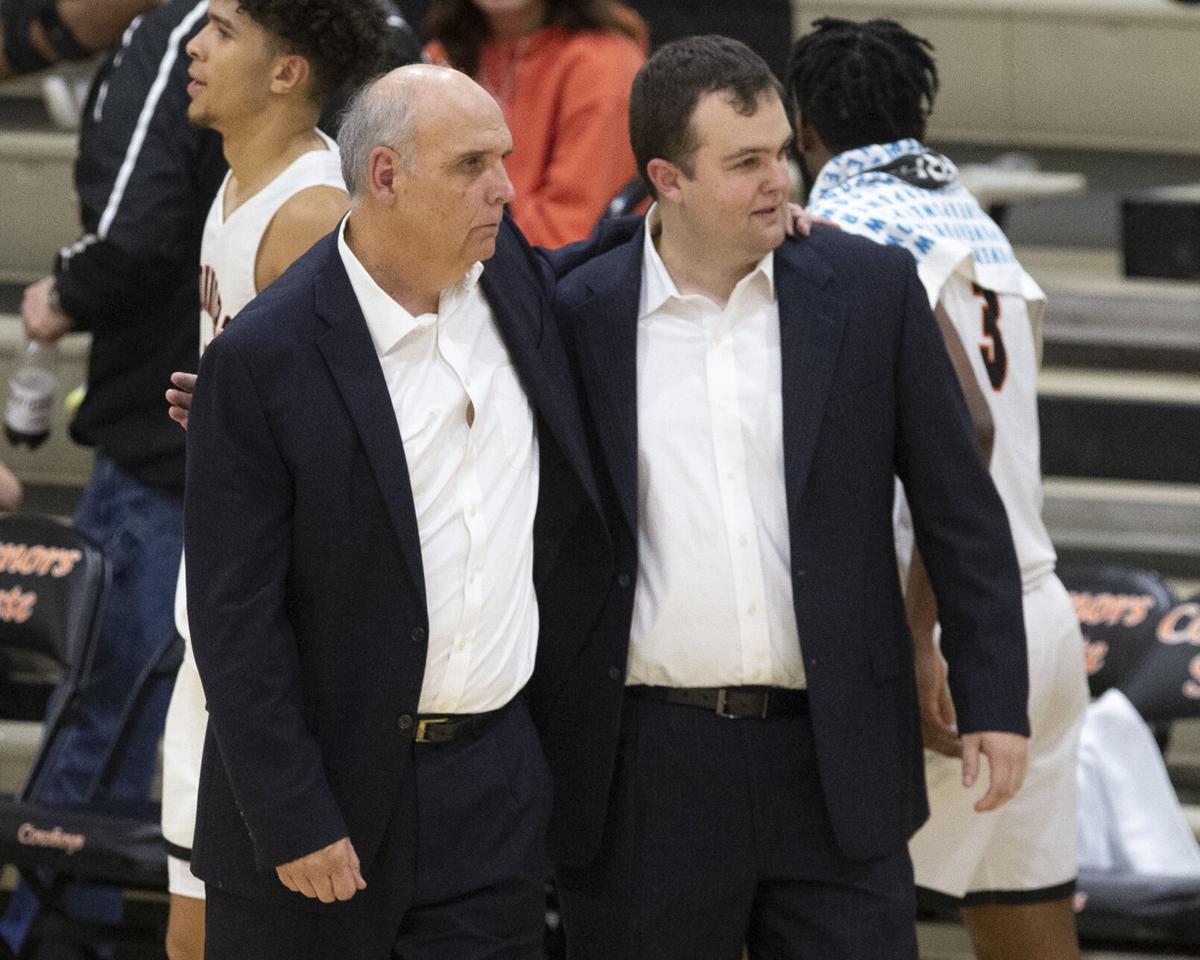 Connors State coaches Bill Muse and his son Bill Muse Jr. embrace as they exit the court on Thursday evening after beating Redlands.  This was the 700th win for Coach Muse.

Connors State’s Xavier Glenn dunks the ball and is fouled by a Redlands  defender on Thursday.

Connors State coaches Bill Muse and his son Bill Muse Jr. embrace as they exit the court on Thursday evening after beating Redlands.  This was the 700th win for Coach Muse.

WARNER — Using a balanced scoring attack and tough defense, the Connors State Cowboys burst out of the gate in the post-holiday portion of their schedule as they rolled to a 71-54 win over Redlands Community College in an Oklahoma Collegiate Athletic Conference game Thursday night at Melvin Self Fieldhouse.

With the victory, Cowboy head coach Bill Muse notched his 700th career win at the helm of the Cowboys spanning the past 30 years.

“You don’t have this kind of success by yourself. If you don’t have good players, you can’t get 700 no matter how good a coach you are,” said Muse, eighth among active NJCAA coaches in wins.

“I’ve been fortunate to have good players around me along with good assistants who helped recruit those good players. And most importantly I’ve had the support of a family that’s let me do this for 30 years.”

Connors got balanced scoring with Bixby freshman Xavier Glenn scoring 17 of his game-high 22 points in the second half to go along with Jahcoree Ealy and Jordan Tillmon, who had 15 each in the first half and finished with 21 and 19 points, respectively.

Muse was perhaps most pleased with the Cowboys’ defense, limiting the Cougars to fewer than 60 points.

“We’ve talked about stepping and guarding all week long. We played good defense on the tough non-conference wins we had with Paris, Neosho and Independence and the two conference loses we’ve had they scored up in the 80s so we know what we have to do to be successful,” said Muse.

“I was real pleased with the job (assistant coach) Bill (Muse Jr.) did this week as I missed some time with health issues, and he did most of the coaching tonight.”

Connors (15-2) started a little slow but finally managed to grab the lead for good five minutes into the game and led by as many as 20 late in the game against the Cougars (9-8).

The Cowboys will be on the road at Murray State on Monday before returning home to face Northern next Thursday.

The Cowgirls found themselves down by 14 at intermission and even though they played the Cougars even in the second half, they were never able to  get back closer than nine points as they dropped their fourth straight game.

The Cougars (8-4) had four players in double figures led by Nyah Banks with 19 points. Connors (7-10) was paced by center London Scott’s 18 points and freshman Jalyn Ford’s 13 points, but the Cowgirls were outrebounded by the taller Cougars and could not get any other consistent outside shooting to help the inside game.