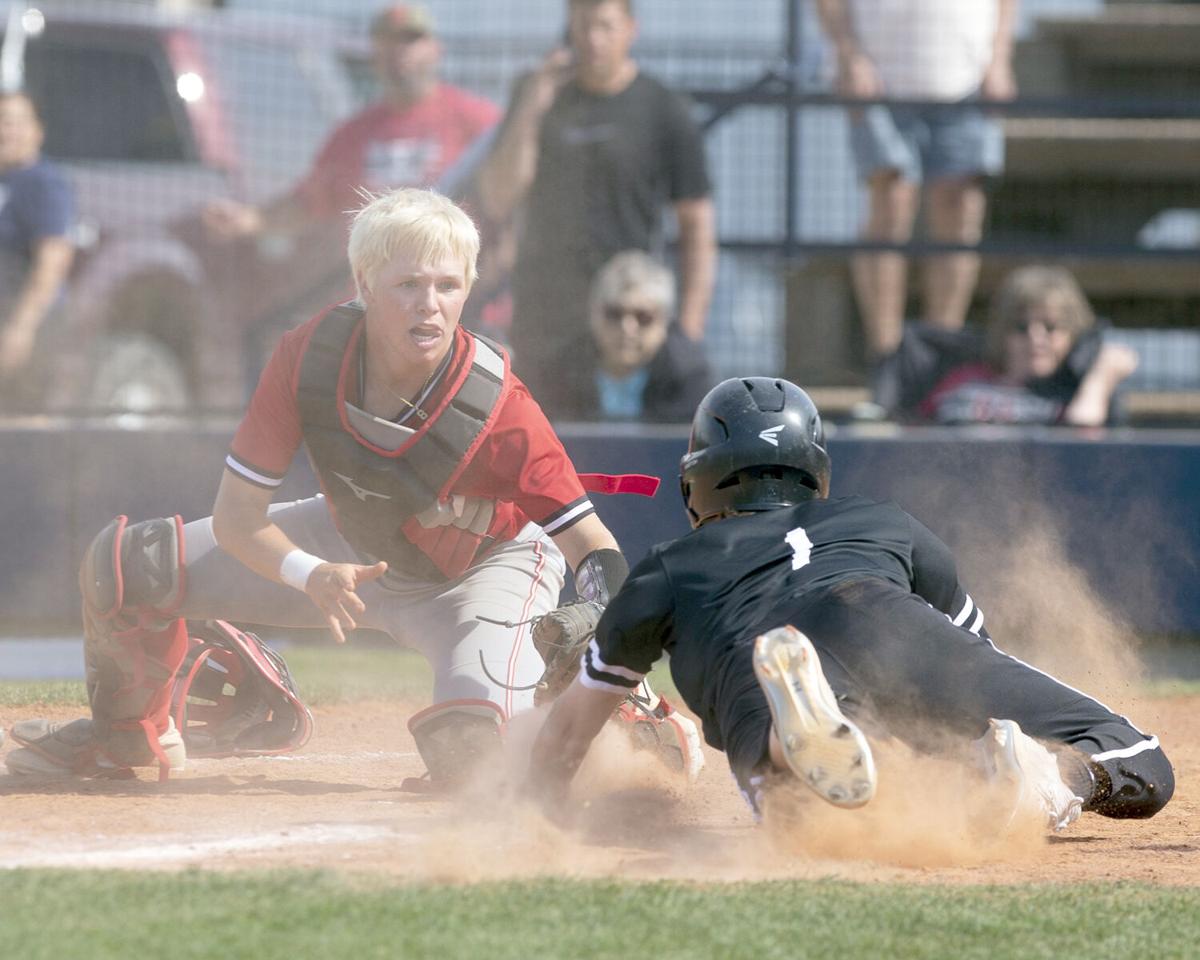 Fort Gibson catcher Cody Walkingstick waits on Verdigris’ Jax Ryan at home plate in the top half of the seventh inning Friday afternoon in the Class 4A state semifinal game at Shawnee. The Tigers lost 5-4 to see their season come to an end. 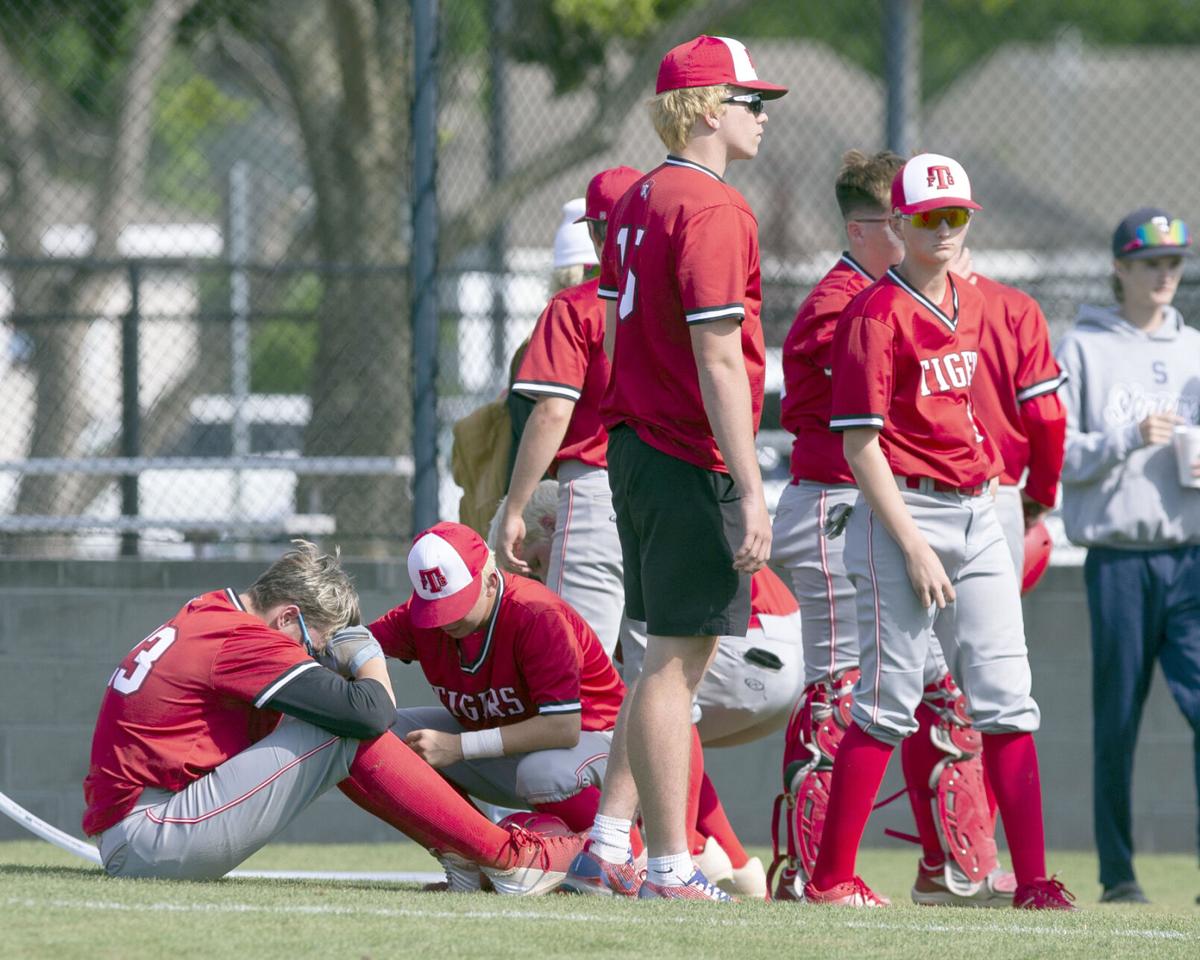 Fort Gibson players react to the final out of the Class 4A semifinal game Friday.

Fort Gibson catcher Cody Walkingstick waits on Verdigris’ Jax Ryan at home plate in the top half of the seventh inning Friday afternoon in the Class 4A state semifinal game at Shawnee. The Tigers lost 5-4 to see their season come to an end.

Fort Gibson players react to the final out of the Class 4A semifinal game Friday.

SHAWNEE — It was the call that was, then wasn’t.

And it shot a dagger in Fort Gibson’s season, a crude ending in what became a 5-4 loss in to the Verdigris Cardinals in the Class 4A semifinals here Friday.

With one out and the bases loaded in the seventh and the Tigers holding to a 4-3 lead, Verdigris’ Logan Hall bunted in the direction of the mound. Jaxon Blunt, who came on in the relief after Cole Mahaney walked two to start the inning, threw home to Cody Walkingstick covering and appeared to have Luke Zafaras out on the force.

Walkingstick made possession, and threw late to first in an attempt to double off Hall. But Brody Rainbolt alertly threw home to get Jax Ryan, who never hesitated rounding third.

Walkingstick made the tag. Fort Gibson’s side erupted, players pouring out on the field in anticipation of a championship matchup with Heritage Hall on Saturday afternoon.

It wouldn’t happen that way.

The home plate umpire, who initially ruled Zafaras out, reversed his call on the first run.  Fort Gibson coach Gary Edwards vehemently protested. Both he and pitching coach Curt Dixon were involved in separate discussions with umpires. Edwards was banished to the bench area but only after a final conference with the umpires and both Edwards and Verdigris coach Brian Keith.

Only the second runner, Ryan, was out.

The name of the home plate umpire was not available.

His counterpart called it the worst thing he’d seen in his tenure.

Dixon just tried to add another appeal during the chaos.

“I told them let’s get together and get this right, If anyone of them saw it, try to come back and help him and let’s just get it right,” he said.

Edwards, remaining on the field well after the contest, consulted a tournament official by phone. What came out of it wasn’t clear except there was no recourse.

The play, a judgment call, cannot be protested. Based on the reactions of both sides, it appeared his team and fans had the better view.

But again, no recourse. No replay official in high school, and no OSSAA-sponsored webstream to see either.

Evan Anderson, who had drawn a walk moments before, eventually scored the go-ahead run on a passed ball.

The Tigers still had a shot as Wyatt Pierce singled and was sacrificed to second by Grant Edwards. Weston Rouse drew a one-out intentional walk, then Walkingstick’s liner at second was snagged by Jaren Keith who flipped to the bag to double off Edwards.

Rainbolt’s sacrifice fly in the first scored Pierce, who reached on an error. In the third, Edwards’ high fly to the gap in left fell in for a double, scoring Pierce. Rouse then singled home Edwards to make it 3-0.

Pierce singled to left in the fourth with one out as Zafares came up throwing to third, where the play was booted as the ball skipped to the backstop, scoring Hunter Branch. That chased Ryan, the Verdigris starting pitcher.

Grant Edwards started on the bump for the Tigers, going 5 2/3 innings, allowing four hits and struck out six. He dodged runners at third in three of his four shutout innings.

Zafares doubled in the Verdigris fifth and after reaching third on a passed ball, scored on a wild pitch. In the sixth, Hall doubled home Anderson with a shot into the left field corner, and Ty Gladu’s RBI groundout made it 4-3.

Mahaney got one out in middle relief while giving up the pair of walks.

Zafares, the winning pitcher in relief, held Fort Gibson to two of their five hits.

Every Tiger is back next year. If anything, this should serve as fuel to their fire as it simmers over an off-season.

“Our guys don’t need that to motivate them. They play hard. They’ll be back.”