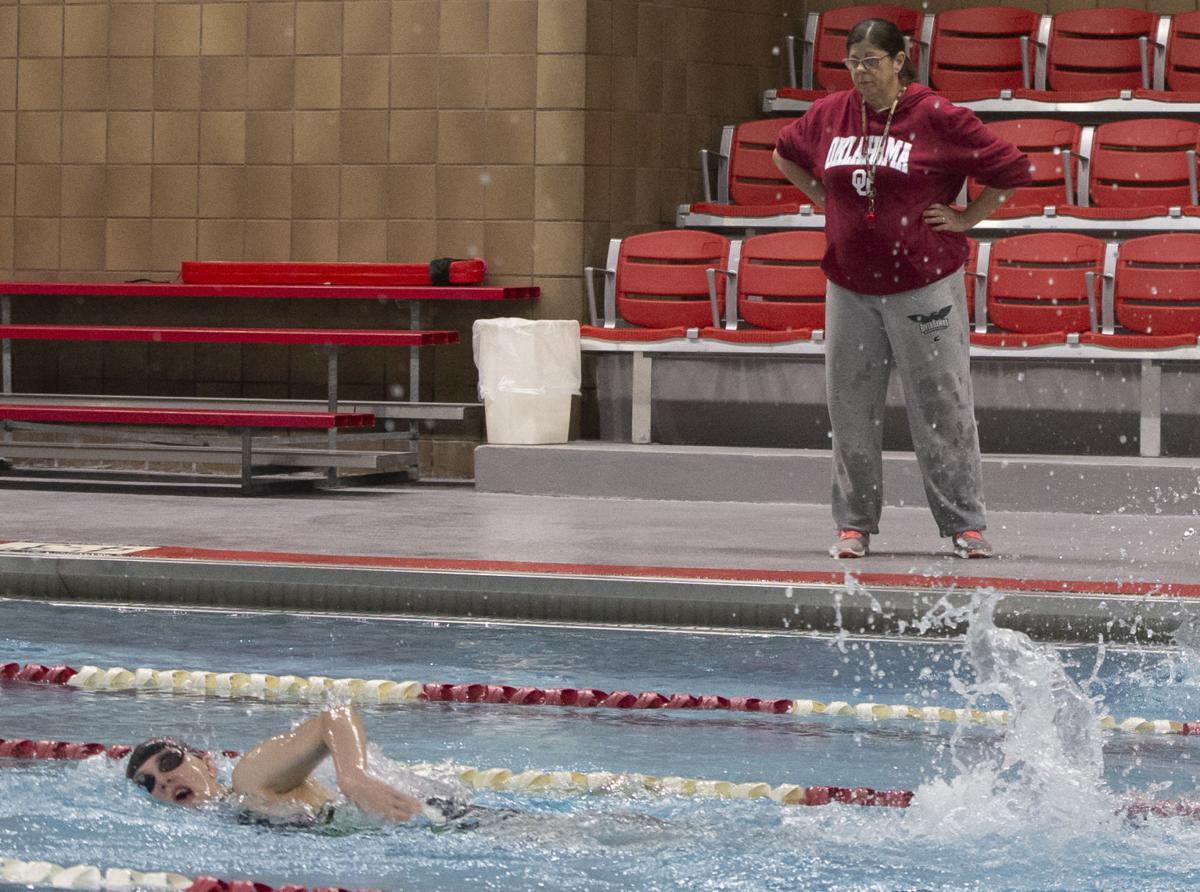 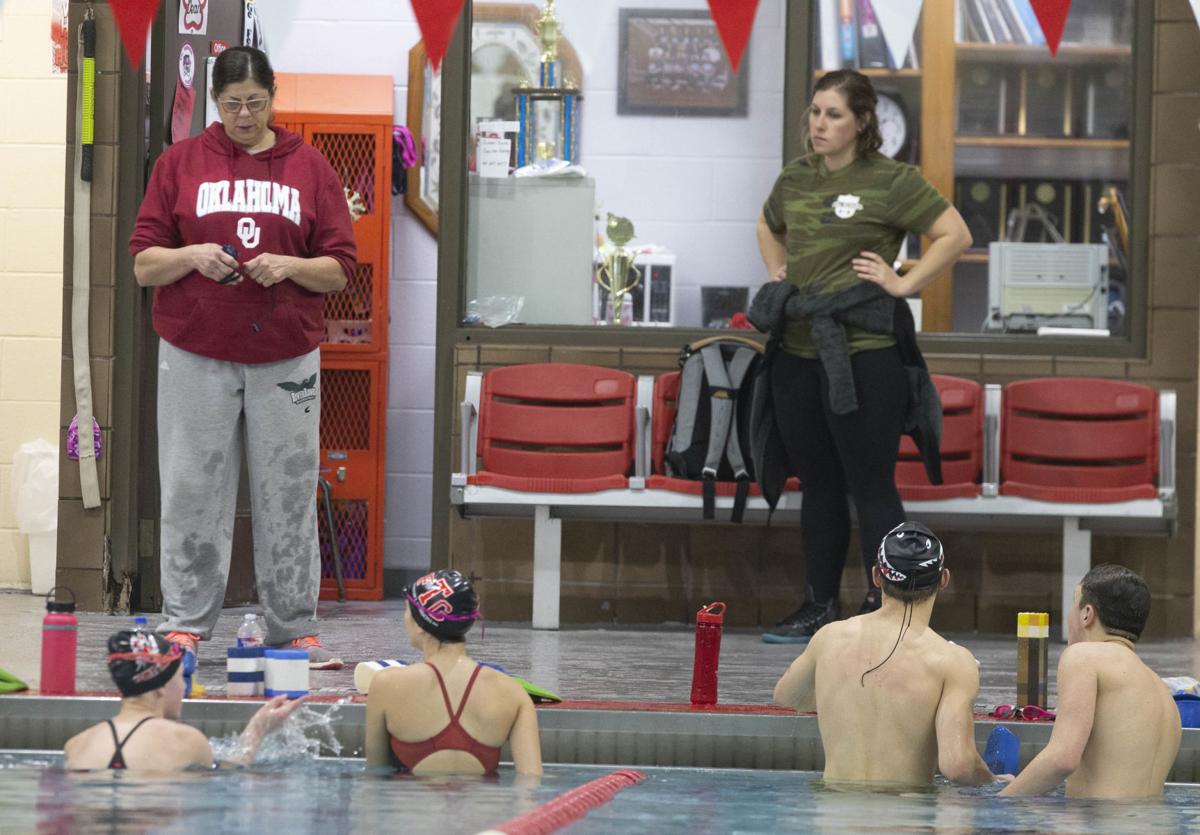 Throughout college and into the early stages of her career in Kansas and western Oklahoma, Connie Dean envisioned always doing the sports she grew up loving as a successful high school basketball and track coach.

When her husband Mike’s job transfer landed the family in Fort Gibson, there was a middle school job available. But there was also the Walker family dynasty firmly entrenched atop girls hoops.  Assisting was going to be the peak there.

But then the late Ray Wise, then the head swimming coach, lost an assistant. Dean jumped at that, and two years later with Wise’s retirement succeeded him.

Basketball would from that point be a spectator sport, and the water — a place she gave lessons while managing the city pool back in her hometown of Medford — will be where she leaves her 20-year head coaching legacy with the state swimming championships later this week at the Jenks Aquatic Complex.

She’s coached four girls team state champions, all in succession from 2011 to 2015, one runner-up and three boys runners-up as well as 18 individual and relay state champions.  And maybe a few more this week.

“I’ve enjoyed it, but after that, it’s time to spend more time with the grandkids,” she said.

Pool time with the five of them will have to be around summer visits. That wasn’t the case for the mother of two of those grandkids, Kendra Kok.

Kok swam and was also part of former girls basketball coach Jerry Walker’s run of state tournament teams on the hardwood. She would eventually play that at Northeastern State, following four seasons of criss-crossing the state between regional or state qualifying in swimming, district or regional basketball playoffs, and back for swimming finals, all within 48 hours.

“My husband did a lot of driving back and forth in those days,” Connie said.

For Kok and others who shared that route at a school where sharing of athletes is essential, it was a challenge from a coach who pushed every kid to maximize their ability.

“She didn’t just demand it of me, but of everyone who was on her team, and only truly passionate coaches demand that much hard work from each and every one of their athletes no matter what their talent level is,” said Kok, who now sells real estate and does cross-fit training and competition. “Competing for her was hard, frustrating and fun, all at the same time. I wouldn’t have been the athlete or the person I am today (if not) for her, and I wouldn’t have wanted it any other way.”

With Dean it was that way from the start, said Trent Rose, who operates a fitness facility in Fort Gibson and serves  strength and conditioning trainer for the team. He was a member of Dean’s first team.

“We had a lot of people on the team when she took over, but participating wasn’t as difficult as it would become,” he said. “Connie basically started putting on workouts like a real swim team would do, like 2 1/2 hours. A bunch of people didn’t like that.

“I think we started with about 16 and after the first meet we had four. They either got kicked off and quit. The only ones left were the ones who were really dedicated to do it.”

Carlyann Miller was one of Dean’s most decorated swimmers as a five-time champion from 2002 to 2005 in various freestyle events in an era where all high schools, large and small, competed in the same classification, Miller would depart Fort Gibson for a collegiate career at Rice as well as a spot in the Olympic Trials.

Now a pediatric anesthesiologist in Austin, Miller recalled the commitment required to play both basketball and swim.

“Like if I needed to get in the pool at 6 a.m. on a Thursday morning, she was like ‘OK, you got it.’” she said. “She was there to support any work that any student athlete needed.”

And, she added, there were times just to have fun, too.

“One I’ll never forget was a swim retreat we’d take to some cabins on a weekend,” she said. “We all got on the ground and leg-wrestled each other. She got down there with us and I think she beat all of us.”

It didn’t become part of the training regimen, though.

“But it at least became an understanding that if she could beat you in leg wrestling, you needed to pay attention to her,” Miller said, laughing.

White was one of Dean’s swimmers who didn’t have to race across the state during basketball. Swimming was her only sport after she quit gymnastics as a seventh-grader with two herniated discs. Now, she’s interning with Dean as an assistant coach and —  who knows – just might succeed her one of these days.

“I don’t ever think I had the hand-eye coordination for those other sports, but I did gymnastics and when I quit, I went from that to nothing,” White said.

Her mother heard of Dean’s Tiger Sharks junior program and told her daughter about it.

“My response to my mother was ‘swimming is not even a sport, what do they do?’” White said. “She told me, ‘you’re going to find out.’

White as a senior won the 100-meter breaststroke, missing the state record by .10 seconds, finished second in the 200-yard individual medley, and was a key member of two relay champions.

Dean wanted the pool to be that kind of place.

That was exactly how Evan Yaussy saw it.

He was a 2009 member of the 400 freestyle relay, the school’s first state championship relay team on the boys side. While he valued that, he equally valued his brother Tyler competing as a member of the team. Tyler has autism.

“She’s coached All-Americans, All-State, state champions. But it’s not just the stud athlete that gets the benefits from that coaching,” said Evan, now a software developer for an oil and gas company in Houston.  My brother was able to come in, get some heats, just like the rest of us, and didn’t get any special treatment. But we were able to get him in and let him prosper like everyone else.”

Sarah Townsend is a senior who will go to the University of Central Oklahoma and study to be a pediatric physical therapist. Like with Dean, Townsend’s competitive swimming will end with the weekend.

“We’d like to give her another big finish and go out as happy as she can.”

It’s been a pretty full experience as it is regardless.

“I had always thought of myself as a basketball and track coach, and in western Oklahoma you did that and track and that’s all there was,” Dean said. “Had I stayed there I wouldn’t have ever found out I had a passion for swimming even though I had a background in it, and I wouldn’t have had the opportunity to have the success and the relationships with the kids that I’ve had.”

In another week, the grandkids will get more of that time.