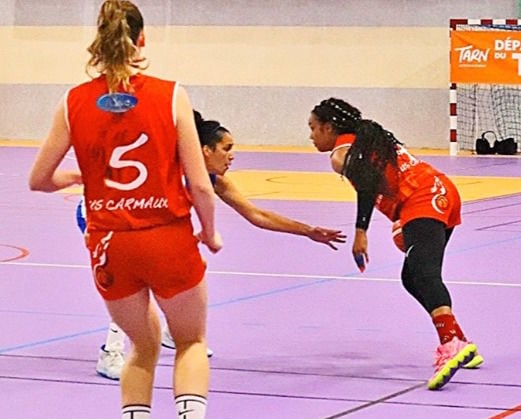 Kelsey McClure, right, looks to put a move on a defender in a game for Team Carmaux out of Toulouse, France.

Kelsey McClure, right, looks to put a move on a defender in a game for Team Carmaux out of Toulouse, France.

Thanksgiving was an uneventful day for Kelsey McClure and those around her.

A continent away, the Muskogee High grad has something to be thankful for — the opportunity she’s had to pursue professional basketball.

McClure, a 2013 All-Phoenix MVP who played at both Central Arkansas and Arkansas Tech in college, departed this fall from a stint with the St. Louis Surge for a more “french” place — a real one, in fact.

She’s a point guard for  Team Carmaux out of Toulouse, a city in the southern part of France near the border with Spain.

Two years ago, McClure found herself in a graduate assistant job at West Georgia University, having not found the right spot through some overseas options and attending some pro combines. She wound up with a minor league team in St. Louis for two seasons. Now, she’s back to doing what she did so well at Muskogee, only in a far different climate and culture after agents reached out to her about the possibility of France.

“Some of the best opportunities for professional careers are in Europe and I’m grateful that my talents were able to place me here,” she said.

“Basketball has always been and always will be a passion for me. Being on the other side of those lines, I learned a totally different perspective of the game and I realized that I still had a motor in me to keep going. I wasn’t finished with the game and expressing myself as a player. I wanted to take that next step as a professional.”

She’s averaging just over 10 points a game with a high of 21 points in Saturday’s game. She’s averaging five assists with a season-high of eight. Her team is a top-five team in the French league they are in.

“They style of play is different. Their offensive and defensive principles definitely differ,” McClure said. “Culturally it’s a shock for sure. I’ve experienced some beautiful cities, and I’ve learn to speak some French. The best trait to have overseas, and that I’ve developed since being here, is adaption and being open to new experiences.”

One of those comes from not quite grasping the language.

“I’m sitting in the locker room, or on the court in a game, at trainings, and the coach is speaking in depth about something and I have no clue what he’s saying,” she said.

She laughs, and continues.

“After it’s all said and done, I look to the girls and one of them says ‘he said to play through you’’ or ‘he said look to get you the ball.’”

She said there’s a coach who speaks some English, and a player on the team who speaks moderate English.

“I’m the only American on the team,” she said. “The other import is from Africa, the rest are from France.”

She lives with the teammate from Africa and one from Paris.

“Only one speaks a little English,” she said. “So we use Google Translate to communicate every single day.”

They assumed being American, she’d be a fan of the local McDonald’s.

“They saw it as American food,” she said. “They were so surprised that I ate healthy and would rather have baked fish or chicken.

The process through the transition, she said, has been smooth, from the day she was offered the opportunity.

“I didn’t have an initial thought because I trusted the process,” she said. From my senior year of college until my current/past seasons I played with the Surge, I’ve always been asked to play overseas, and been offered opportunities, but I didn’t jump at every opportunity just to say ‘I played abroad.’

“There’s a lot of things that come into play when playing basketball overseas, from what you can expect, and what you should look for, and that’s why it was beneficial to have a solid agent to help me review my contract and guidelines before signing on that line.”

So, Thanksgiving was just a normal day, preparing for what became a season-best performance on Saturday.

She’ll be home for Christmas, but maybe in between, a little bit of McDonald’s to stave her over.

You know, being American and all.

Funeral service will be 11:00 a.m., Friday, January 24, 2020 at the Lindsey Chapel Baptist Church. Burial will follow at the Triplett Cemetery.