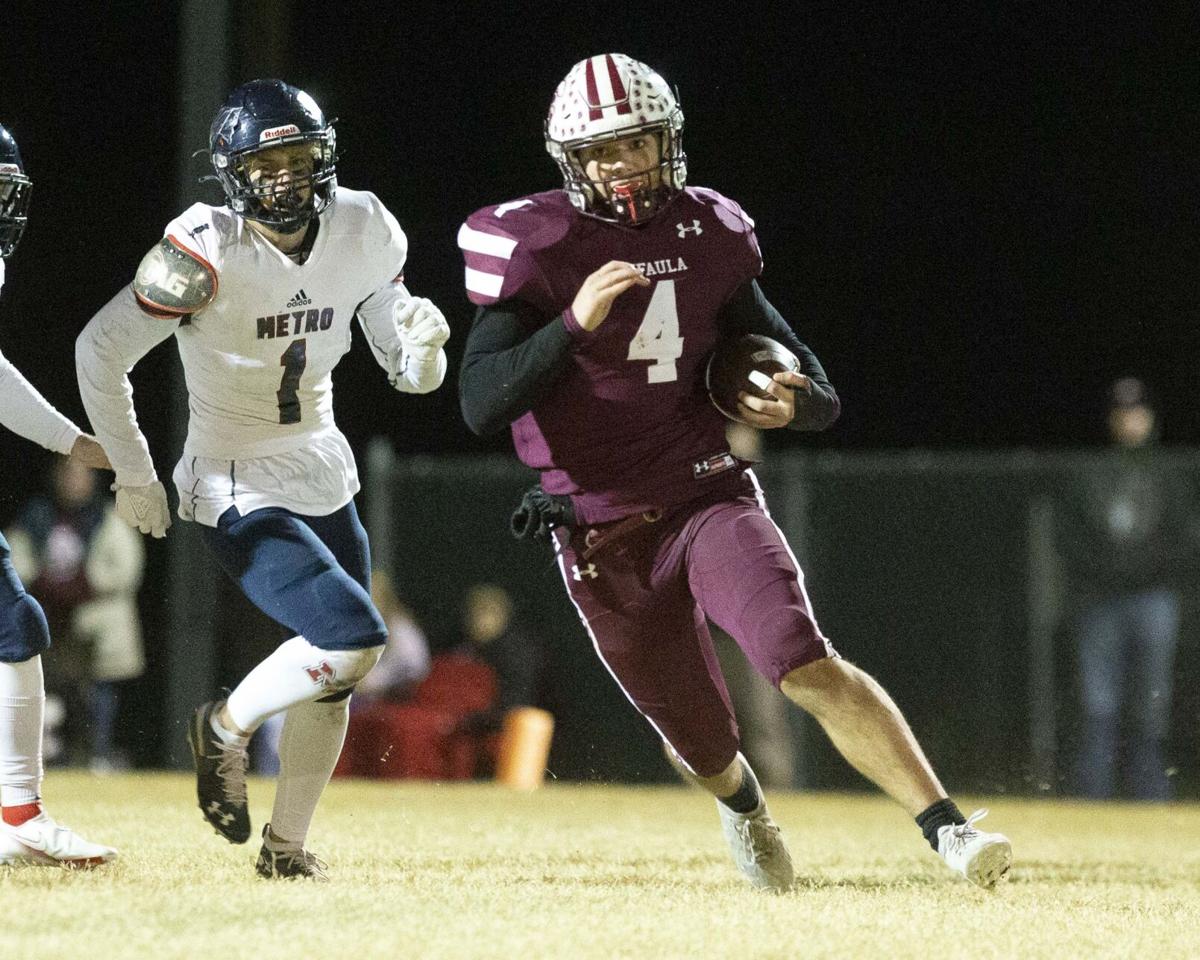 Eufaula's Luke Adcock breaks into the Metro Christian secondary and scores on a long touchdown run in the first half Friday. 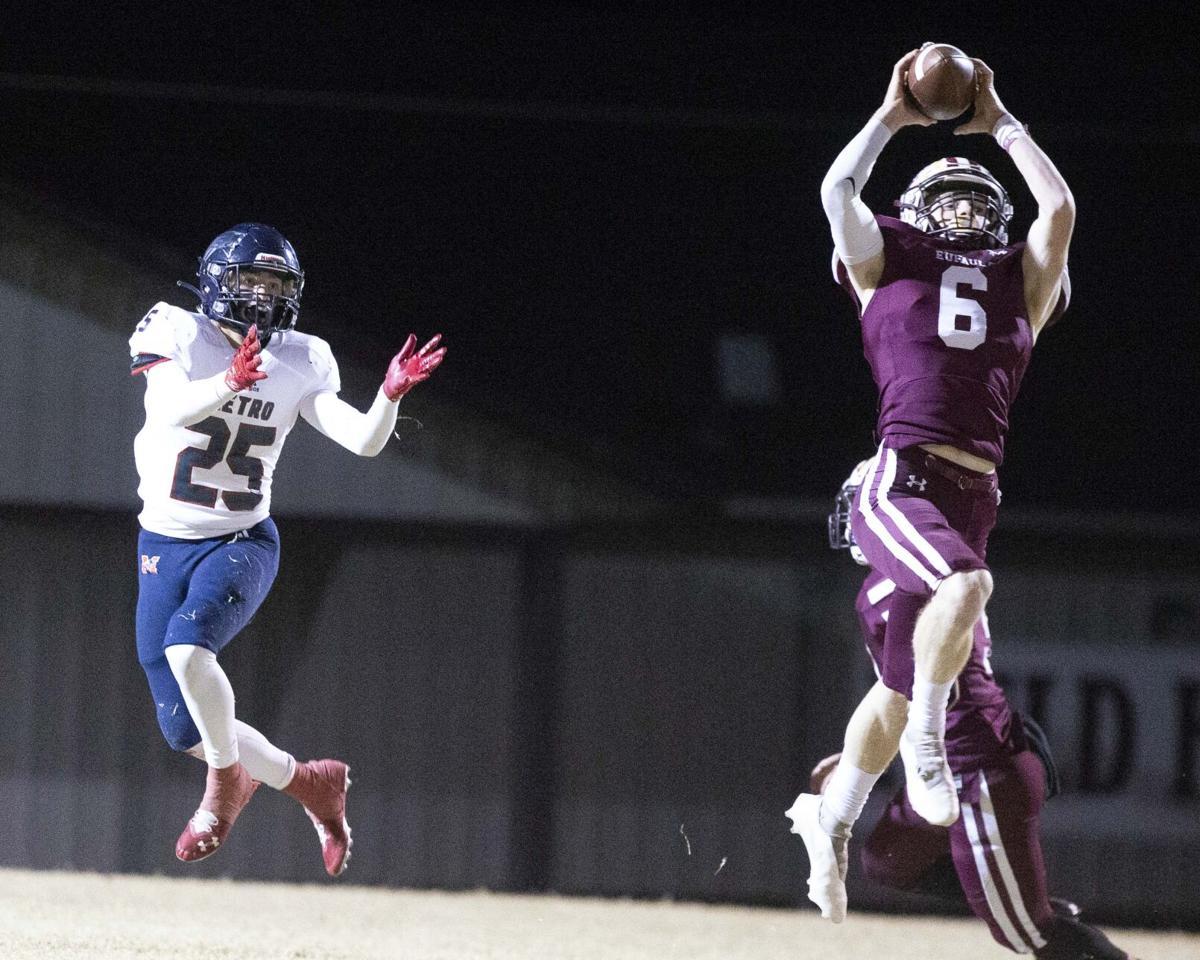 Eufaula's Tyler Lee intercepts a pass against Metro Christian in the first half Friday at Eufaula.

Eufaula's Luke Adcock breaks into the Metro Christian secondary and scores on a long touchdown run in the first half Friday.

Eufaula's Tyler Lee intercepts a pass against Metro Christian in the first half Friday at Eufaula.

EUFAULA — Unlike previous games where Eufaula jumped out to fast starts, Friday night’s game was close through the first quarter.

Then the Ironheads blew the game open and cruised to a 56-21 victory over the Metro Christian Academy Patriots at Paul Bell Stadium in the second round of the Class 2A playoffs.

Both teams scored twice in the first quarter and with the game knotted at 14 each, Eufaula (11-1) flexed its running offense and reeled off 21 unanswered points in the second quarter.

“Very proud of my kids, we had a great week of practice and we knew we were going to  be in a challenge. I told our kids there is no way we are going to put up 40 points on the board and here we put up 56,”   said Eufaula head coach Larry Newton.

Eufaula scored on their first and third drives with quarterback Luke Adcock scampering for a 20-yard score on the first series and finding Khelil Deere on a 55-yard pass play for the second score.  Metro (8-4) scored on a 20-toss from Kirk Francis to Breck Nauman and went up 14-7 on a one-yard dive by Dempsey Gilman before Deere tied it.

At this point the Eufaula offense took control behind the fleet feet of Adcock and Matt Clover.  Clover scored runs of 38 and 30 yards and sandwiched between those was a 28-yard scamper by Adcock.

“Only thing I can say is all the credit goes to my offensive line, without them I couldn’t do anything.  And my receivers were making some great blocks too.  It was part of our plan to run the ball as much as we could,” said Adcock.  Adcock finished the night with 177 yards rushing on 17 carries and added 84 yards passing, completing three of four passes with a touchdown.

That offensive plan continued in the second half with the Ironhead offense racking up another 21 unanswered points.  Adcock added a touchdown on a four-yard carry while Clover raced in from 59 yards out.

While the Ironhead offense was scoring, the defense was keeping the Patriots in check.  Metro’s offense put up 206 yards in the first half — 183 of that through the air — but Eufaula limited them to 109 in the second half and only 75 yards passing.

“We knew it was going to be a struggle, especially at first, 'cause man they just get after you," said Newton. "We practiced it all week, but you can’t do anything like what they do.

"They have beat some good teams this year but we were able to play defense well enough and then get after them on offense.  We had some success with Luke (Adcock) running the ball and that kinda opened it up for everyone else."

The first came in the second quarter with Eufaula up 28-14 and the Patriots driving.  After extending the drive with a fumble recovery on a punt, Metro moved the ball inside the Eufaula 30, but Tyler Lee picked off the pass and returned it to the Metro 30.  Jaydin  Bray was responsible for the second pick, and that set Eufaula up to score on the next series and go up 49-14.

Eufaula will practice during the week of Thanksgiving and will travel to Oklahoma Christian on Friday in a playoff rematch from a year ago.