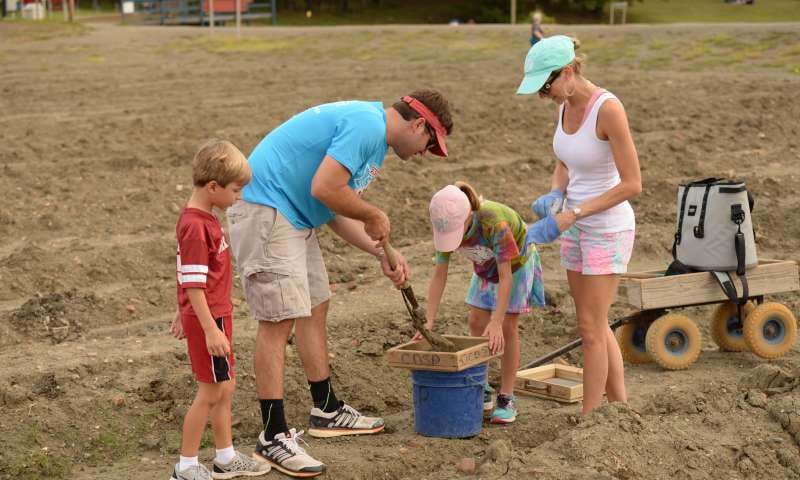 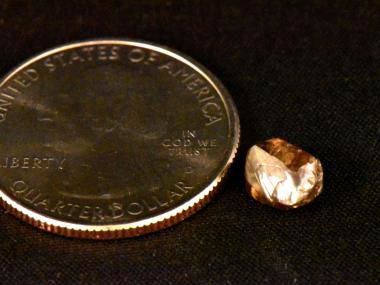 The Lady Beatrice Diamond was found June 20, 2020 at Crater of Diamonds State Park in Arkansas. Here it is compared to the size of a quarter.

The Lady Beatrice Diamond was found June 20, 2020 at Crater of Diamonds State Park in Arkansas. Here it is compared to the size of a quarter.

If you want a singular outdoor experience, you might check out the only diamond-producing site in the world open to the public — and you get to keep what you find.

A rockhound’s delight since it was purchased by the state of Arkansas in 1972, the Crater of Diamonds State Park is located near Murfreesboro, which is about 300 miles from OKC and 250 miles from Tulsa.

The Arkansas state flag proudly has a large white diamond on it, which means Arkansas is the only diamond-producing state in the nation.

Farmer John Huddleston was on his property one hot August afternoon in 1906 when he found a small shiny object. Huddleston told of the find to Tom Shiras of the Arkansas Gazette.

“I was crawling on my hands and knees…when my eyes fell on another glittering pebble… I knew it was different from any I had ever seen before,” he said. “It had a fiery eye that blazed up at me every way I turned it. I hurried to the house with the pebble, saddled my mule and started for Murfreesboro.”

That pebble turned out to be a two-carat diamond. Later, the farm was sold to various mining operators.

Your search will be in a 37-acre plowed field, the eroded surface of an ancient volcanic pipe.

Fees for prospecting are $10 for adults, $6 children ages 6-12 and no charge for anyone under age six.

Wear old shoes or boots and bring a hat and sunscreen. You can bring your own digging tools. They have have had rental equipment available but Covid-19 put a halt to renting.You may wish to bring a small wooden box screen, a plastic bucket, folding army shovel and knee pads.

There are three methods of searching for diamonds.

Surface searching involves walking up and down the rows of dirt looking for diamonds. Following a hard rain, this is the most productive method.

Digging in the soil and screening the soil is the most popular method.

The third method involves digging deep holes down to a certain kind of soil, then screening the soil and sorting through the small gravel to find diamonds.

Crater of Diamonds State Park offers free rock and mineral identification at the Diamond Discovery Center. Your finds are weighed and certified free of charge for the finder.

The most common colors of diamonds that can be found are white, yellow and brown.

Usually, the diamonds are too small to be cut.

Some people like to have them mounted in a pendant or necklace. Should you find one large enough to be cut, the park officials can give you a list of diamond cutters.

A one carat diamond is comprised of 100 pts. and is about the size of a green pea. Most diamonds found in the park are around 25 pts. or ¼ carat in size.

Go to www.craterofdiamondsstatepark.com  or call (870) 285-3113 and sign up for their newsletter. It lets you know the last date the field was plowed and the diamonds finders’ names, home states and carat weight of the latest finds.

If you get a busy signal when calling the park, please email the park directly at CraterofDiamonds@arkansas.com.

This summer of 2020 started with a sparkling surprise for one western Arkansas woman. Fifty-six-year-old Beatrice Watkins, of Mena, visited Arkansas’s Crater of Diamonds State Park, in Murfreesboro, on Saturday, June 20, with her daughter and granddaughters. Within 30 minutes of arriving, she had unknowingly picked up the largest diamond found there, so far this year.

According to Watkins, she was dry sifting soil on the north end of a culvert near the center of the park’s diamond search area when she discovered her gem. “I was searching with my daughter and granddaughters when I picked it up. I thought it was shiny but had no idea it was a diamond!” Watkins said, “My daughter googled similar-looking stones and thought it might have been iron pyrite, so I stuck it in my sack and kept sifting.”

After about an hour, Watkins and her family walked to the park’s Diamond Discovery Center to take a break. At that time, park staff identified Watkins’s finds and informed her that her “iron pyrite” was actually a brown diamond weighing more than two carats. “I was so excited, I just couldn’t believe it,” Watkins said. “I still can’t believe it!”

According to Park Interpreter Waymon Cox, “Ms. Watkins’s diamond is about the size of an English pea, with an oblong shape and a metallic luster. The surface is smooth and rounded, a characteristic shared by most Crater diamonds. It has a dark brown shade similar to iced tea.” Watkins’s gem is the largest found at the park since Pat Choate, of Jacksonville, Arkansas, found a 3.29-carat brown gem in October 2019.

Cox noted that even though it rained Saturday morning, Watkins found her diamond by dry sifting. “Many visitors use screens to dry sift where they sit in the field. If the soil gets too damp, dry sifting doesn't work very well because it clumps together in the screens. We've had a lot of rain this year, but the field was dry enough during Ms. Watkins’s visit that dry sifting was possible. The fact that she found her diamond this way is really special.”

Many people choose to name the diamonds they find at Crater of Diamonds State Park. Watkins named her gem after herself, calling it the Lady Beatrice. She says she doesn’t know what she will do with her diamond at this point but will probably keep it as an inheritance for her kids and grandkids.

As of this writing, 139 diamonds have been registered at Crater of Diamonds State Park in 2020, weighing more than 22 carats; four diamonds registered this year have weighed at least one carat each.

A large gem found in the park was in 2015 and was over 16 carats. It was also white and was named the Esperanza diamond.

Two years before that find, a teenage girl from the OKC area found a canary-colored diamond weighing 3.87 carats which she reportedly sold for $20,000 to save for college.

She named the diamond, “God’s Jewel”.

Several Oklahomans appear on the list through the years of finding large diamonds, those of five carats or more.

The largest diamond discovered in the park was a 40.23-carat, white diamond. It is known as the biggest diamond found in the United States and was discovered in 1924. It was named the Uncle Sam diamond by its finder.

The park hosts tent and recreational vehicle campers and has a restaurant. In 2004, it opened Diamond Springs Water Park, a mining-themed aquatic playground. At this time, because of Covid-19, park officials have not set the opening date for this summer yet.

My wife has put a visit to this worthwhile destination on her “bucket list”.

One of the ways to manage the number of people in the search field will be to limit admission to 800 people per day. Tickets can be purchased online, and those ticket holders will have more direct access to the mine area.

Walk-up tickets can be purchased in the Visitor Center, where maximum occupancy will be limited to 15 persons.

The statewide health emergency caused by the COVID-19 pandemic will require that the following rules be followed:

Walking trails, picnic areas and RV camping at the park will still be open to all visitors. The Diamond Springs Water Park will open at a date to be determined later.