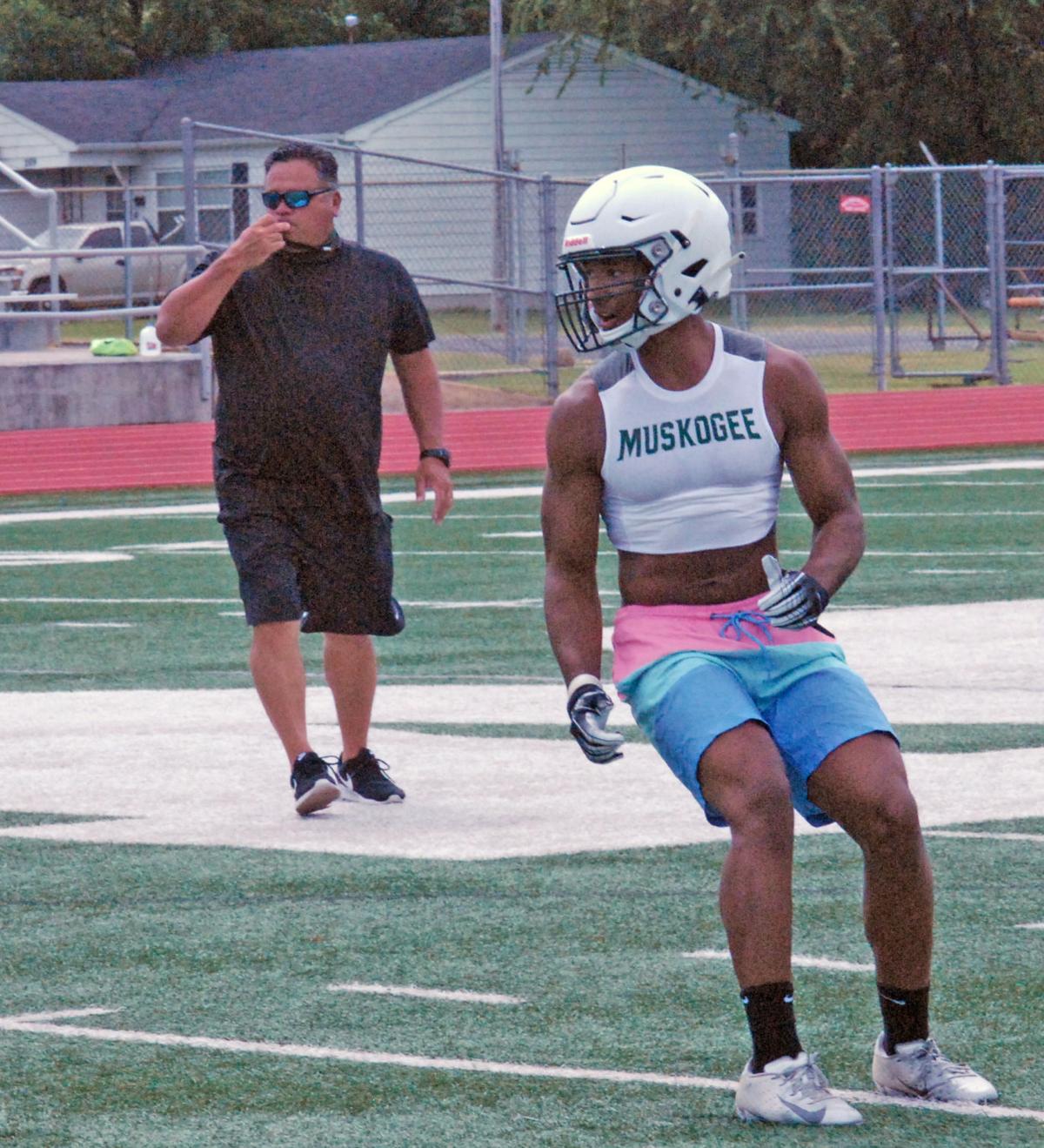 Muskogee assistant John Williams looks on during Tuesday’s 7-on-7 practice  as safety Ty Williams eyes the play’s progression. Williams is in his first season at MHS. 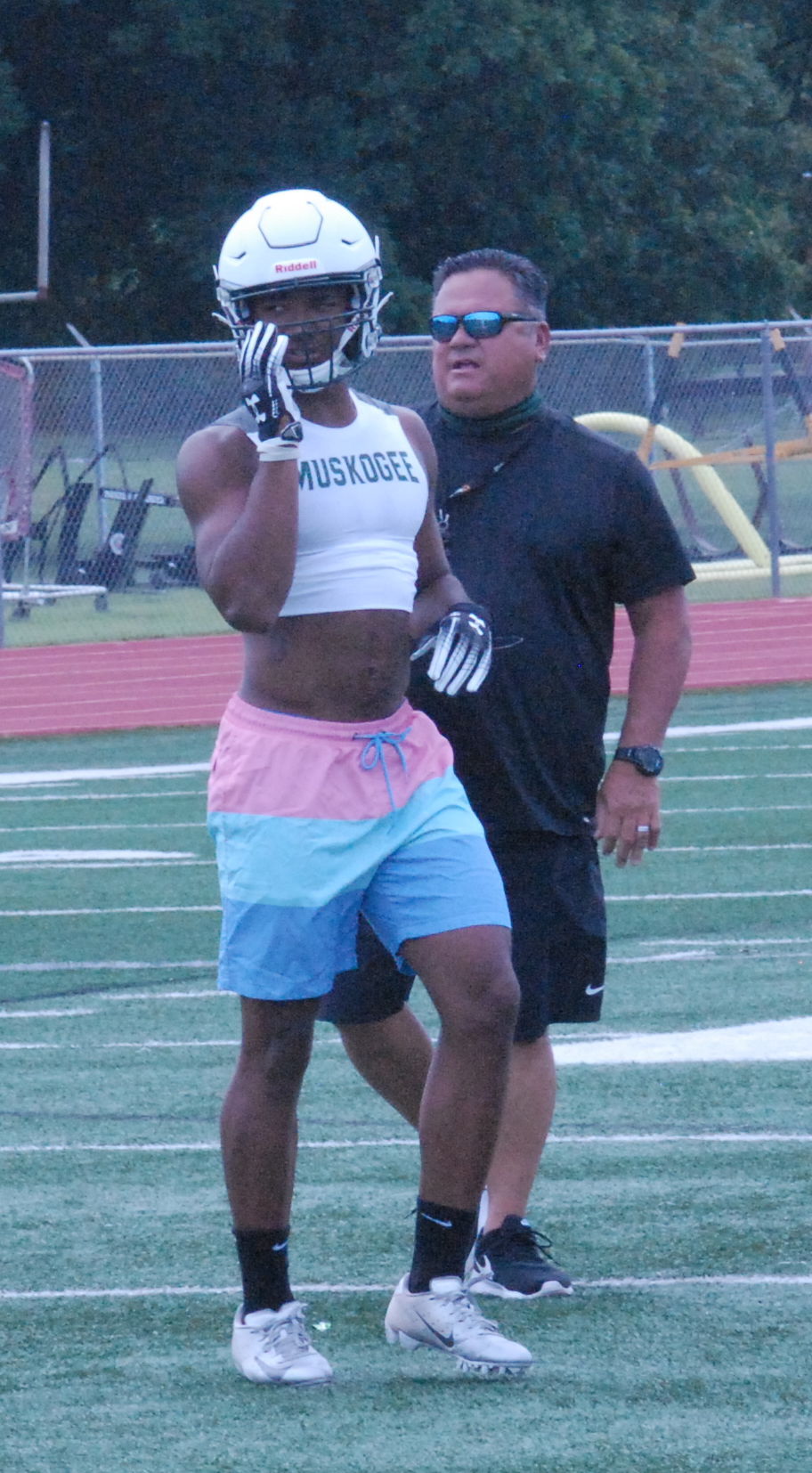 Muskogee assistant John Williams looks on during Tuesday’s 7-on-7 practice  along with  safety Ty Williams. Coach Williams is in his first season at MHS. 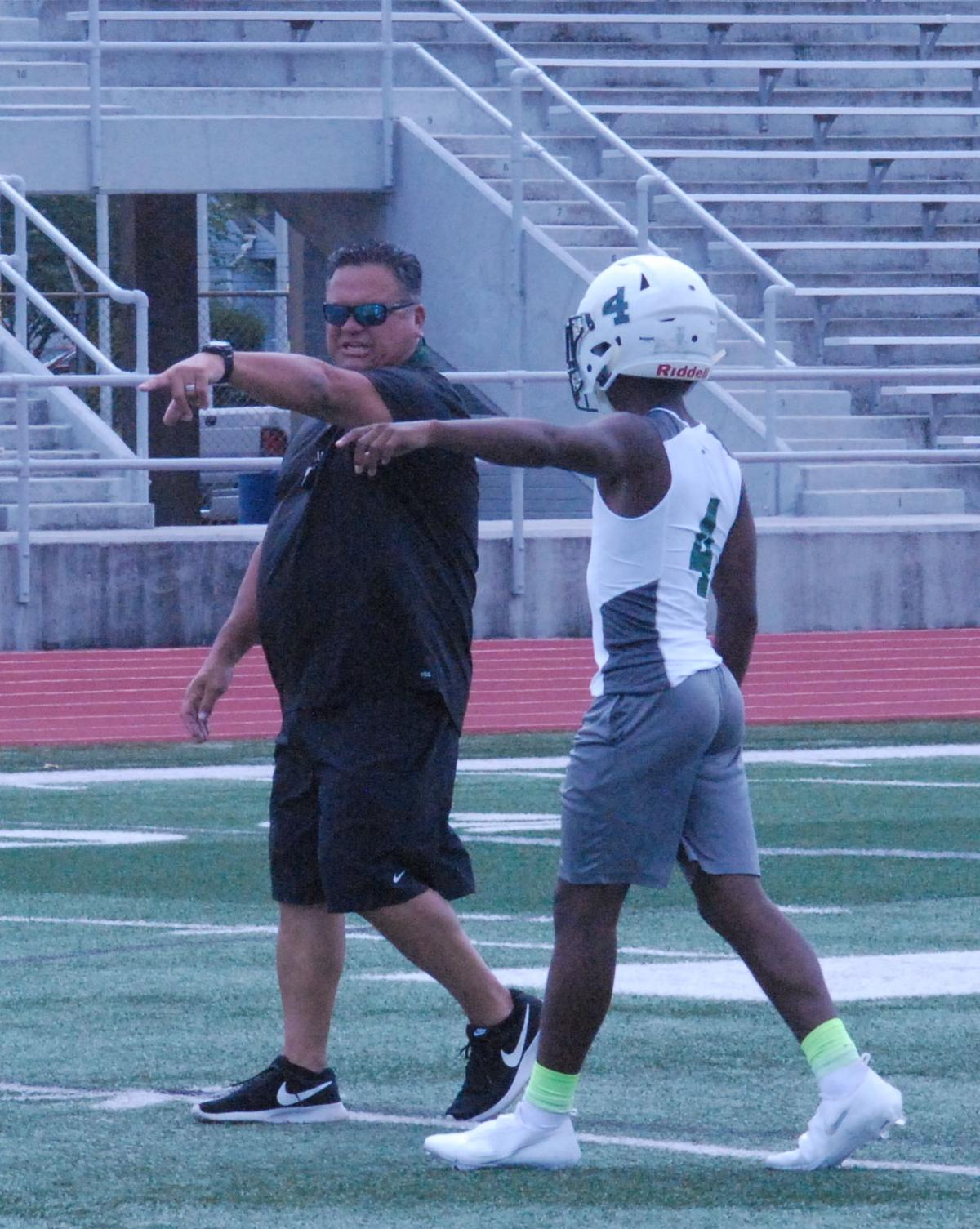 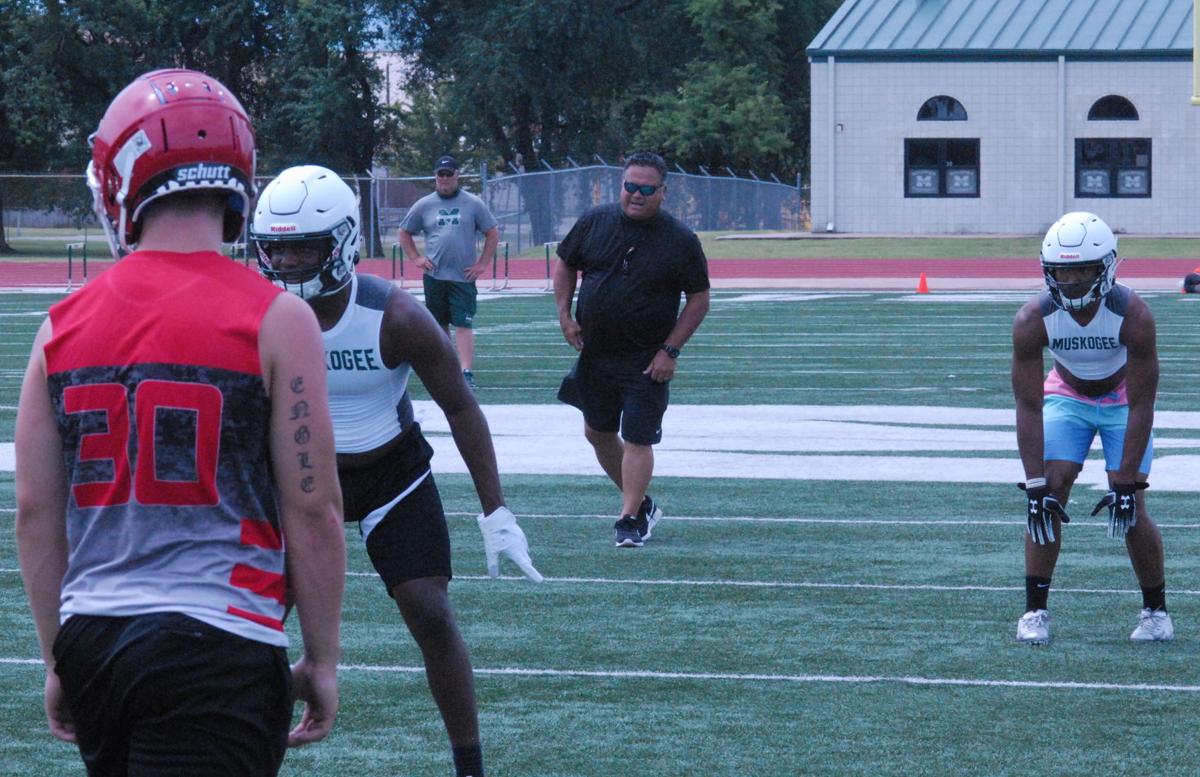 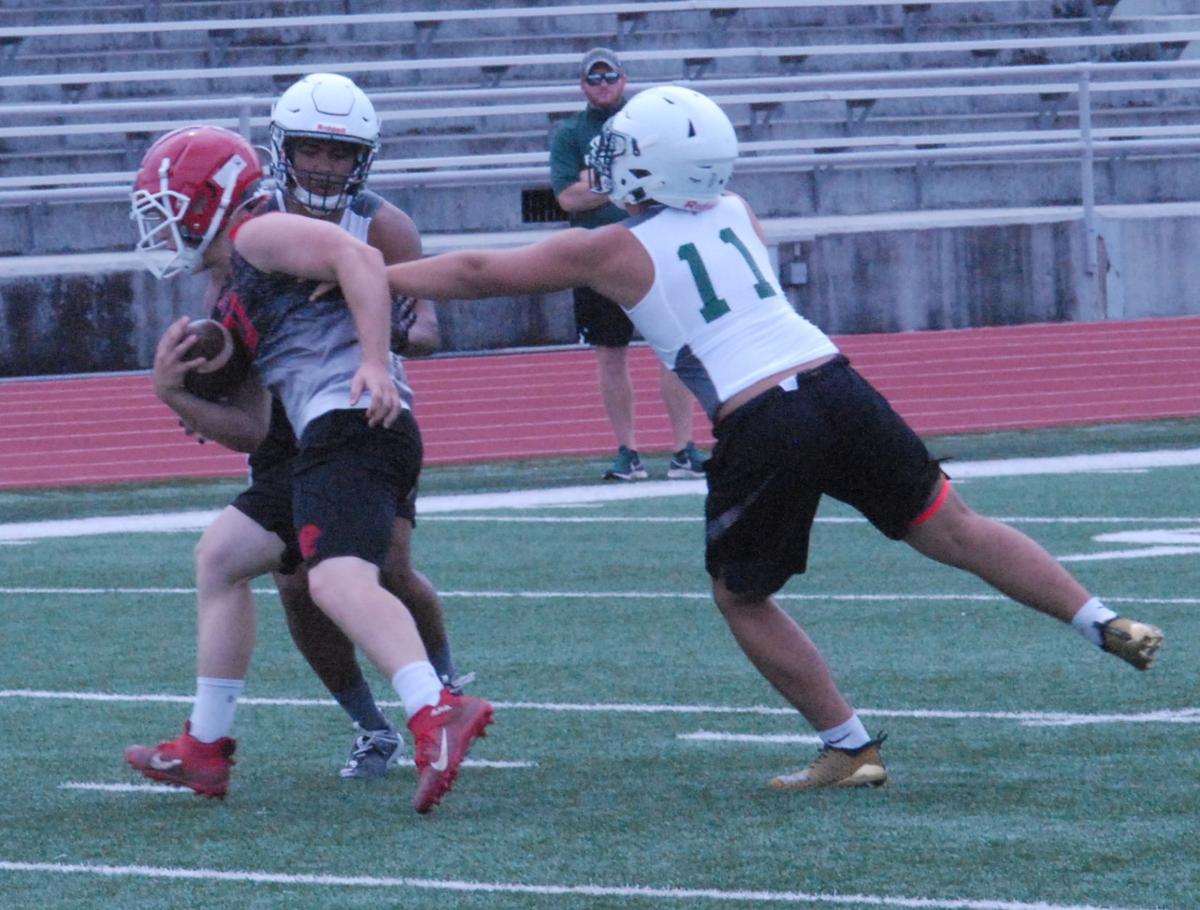 7 on 7 action Tuesday between Muskogee and Stigler.

Muskogee assistant John Williams looks on during Tuesday’s 7-on-7 practice  as safety Ty Williams eyes the play’s progression. Williams is in his first season at MHS.

Muskogee assistant John Williams looks on during Tuesday’s 7-on-7 practice  along with  safety Ty Williams. Coach Williams is in his first season at MHS.

7 on 7 action Tuesday between Muskogee and Stigler.

John Williams’ tour of duty, entering its 30th year, has covered a wide swath of territory. But he thinks he’s settled in at Muskogee as the Roughers’ new defensive backs coach.

Starting out on the football staff at Las Vegas Clark, the Tahlequah grad then went into Texas, going 11 years at San Antonio East Central and Roosevelt highs, helping the latter to an unprecedented five playoff runs. From there it was on to defensive coordinator gigs covering five years at two more Texas stops, Conroe and Paris, before taking a defensive line job under former OU defensive lineman Stacey Dillard at Princeton, then ending his Texas tour as a linebackers coach at Sherman under one-time Baylor linebacker Gary Joe Kinne.

Qualifying for his state retirement there, he was set to make one more move in Texas when his wife Kimberly was named dean at NSU-Muskogee. After a year on Tahlequah’s staff and part of a district championship run in 2019, he’s reunited with a former NSU teammate, defensive coordinator Travis Hill. Hill was a senior when he got there in 1984 having just graduated from Tahlequah High.

“Tahlequah had an emotional attachment and I enjoyed the kids — a  lot of them, I knew their parents,” Williams said. “My last year at Tahlequah, Charlie Cooper was the coach. We won district then and then last year to do it as a coach was special.”

“What’s strange is I met my wife unknowingly when I happened to go with a friend to watch Tahlequah’s girls play in the Shrine Classic at Muskogee High when she was playing at Union,” Williams said.

Stigler coach Chris Risenhoover, whose team was part of a 7-on-7 practice at Indian Bowl on Tuesday, was a high school teammate and groomsman in Williams’ wedding.

“He’s quite an artist,” Risenhoover said. “I had him draw some pictures of me during our playing days that you could put on your wall in your room. Great personality and as far as football leadership he’s as about as passionate a football fan-player-coach as you will find. We’d have electric football tournaments at his house. He moved those pieces a little faster than the average player.”

And now comes a chapter that in Williams’ words, “provided an interesting scenario” as well as the perks of a Class 6A program.

“With Travis there and getting to know Rafe (head coach Watkins) and John Graham (offensive coordinator) and others, I’ve enjoyed every second,” he said.

The “interesting scenario” also includes a blue-chip safety in Ty Williams, who for the moment is settled in on Oklahoma State after a junior year where he had an area-best nine interceptions. He’s also beginning his third year starting at quarterback.

“This guy has got something not many people have. I’ve coached one other guy in 30 years that I thought just by passing the initial test of what I can see them do is on that level,” the elder Williams said.

That was Quinton Demps, a safety drafted by Philadelphia out of Texas El-Paso in 2008 before playing for three other NFL teams — Houston, Kansas City and Chicago.

“The other safety, Isaiah Givens, he likes to hit, and is ferocious,” Williams also noted. “I like being a safety coach and coming in with guys like this.”

On Tuesday, Williams got to branch out from the early COVID-19 routine with a look against other competition provided by his groomsman’s squad.

“Ty and Isaiah saw a couple things they haven’t seen in practice,"  the coach said. “They saw things and did it right the next time. They’re both quick learners.”

What from the various football cultures in his background does Williams lean on as he contributes to the staff at Rougher Nation?

“I’ve had good teams and not so good teams, good ways and ways that weren’t going to make you successful. You can run any offense or defense and hopefully your personnel fits, but when you make kids accountable, showing up on time, working hard when you’re here, it’s those kind of things I take from Texas, and I have a feel for that with what I’ve seen Rafe and them doing here,” he said.

“You want what you do to give everyone a chance to understand the concept. Where they are confused, they stand still. It’s paralysis by analysis. Keep it simple to where everyone knows what they’re doing and hold them accountable for the little things.”

Watkins likes the fit, which will include a plug for the vacancy created in powerlifting with Jason Sexton taking the head coaching job at Shawnee.

“We’re the same age, we’ve all grown up talking the same language and terminology and he’s just one of those guys you meet with and make the kind of connection that tells you he’ll be a fit with what you do,” Watkins said.

Tuesday’s practice was the first with an opponent. Stigler was a late fill-in for Catoosa and Sallisaw, both of which had different issues related to campus restriction for now. Watkins thinks both will be free for the team camp scheduled July 7-9. Risenhoover’s team cleared its own protocol and neither team had kids who failed health screenings Tuesday, something that hasn’t happened for Watkins’ squad since convening on June 8. That hasn’t been the case out west with Edmond, Stillwater and Ponca City shutting down for a period, among others.

Playoff veterans from 2019, Caleb Webb, Darian Davis, Ty Williams, Isaiah Givens and Antonio Zapata were back in the fold Tuesday.  Watkins took note of some newcomers who stood out from Tuesday’s session. Among those, Hunter Hess at middle linebacker had an interception and by the end of the session was moved up to the first team group. Seneca Collins, Raheem Payne and Keondre Johns also had good days.

“Raheem caught a nice deep ball and did a good job a corner. Seneca did some good things at wide receiver and corner. Put Keondre in there and it’s a group that’s got a lot of potential but have a lot of football to learn,” Watkins said.