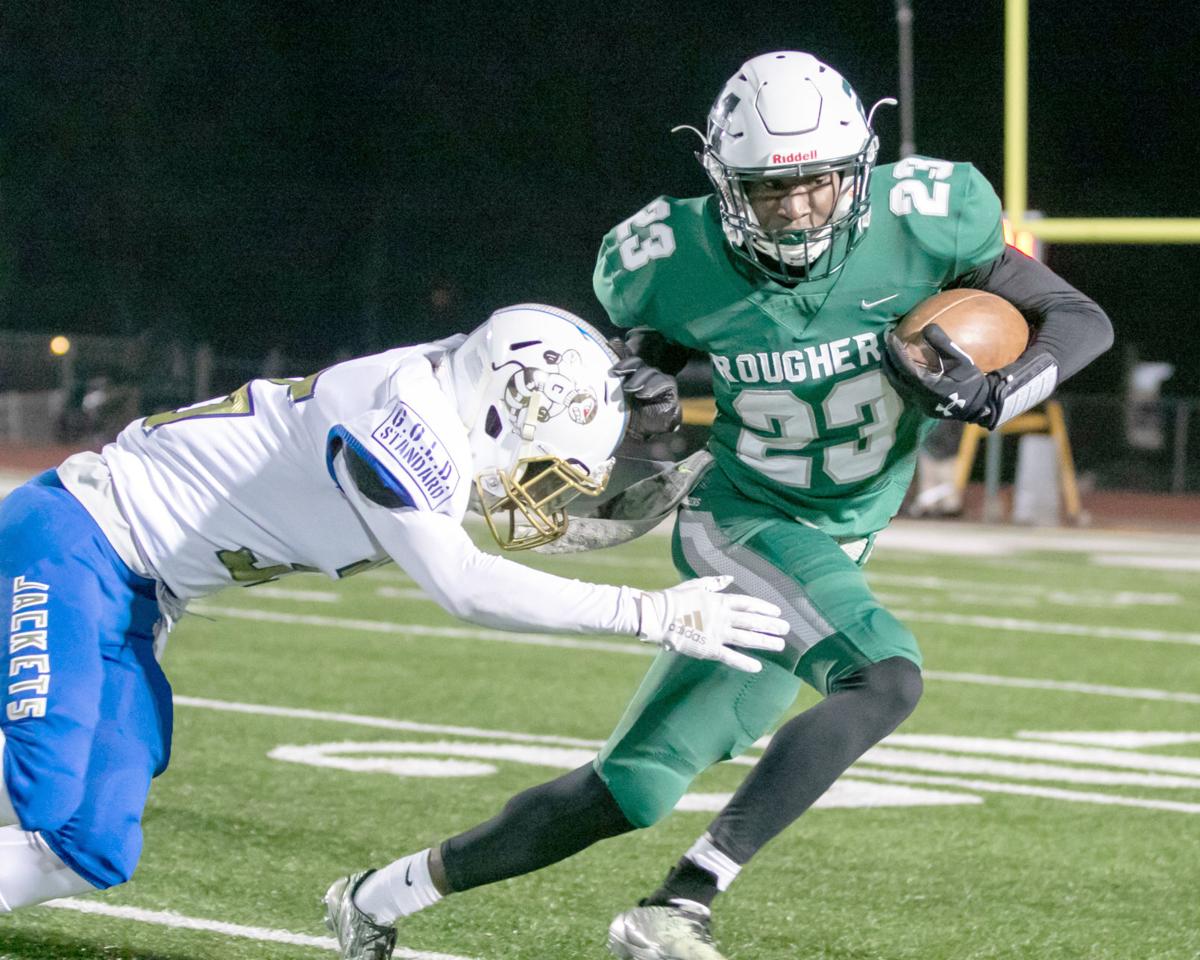 Muskogee’s Kentrell Mitchum right, tries to get by a Choctaw defender during the Roughers’ 29-21 loss to the Yellowjackets in the first round of the Class 6A-II playoffs on Friday at Indian Bowl. 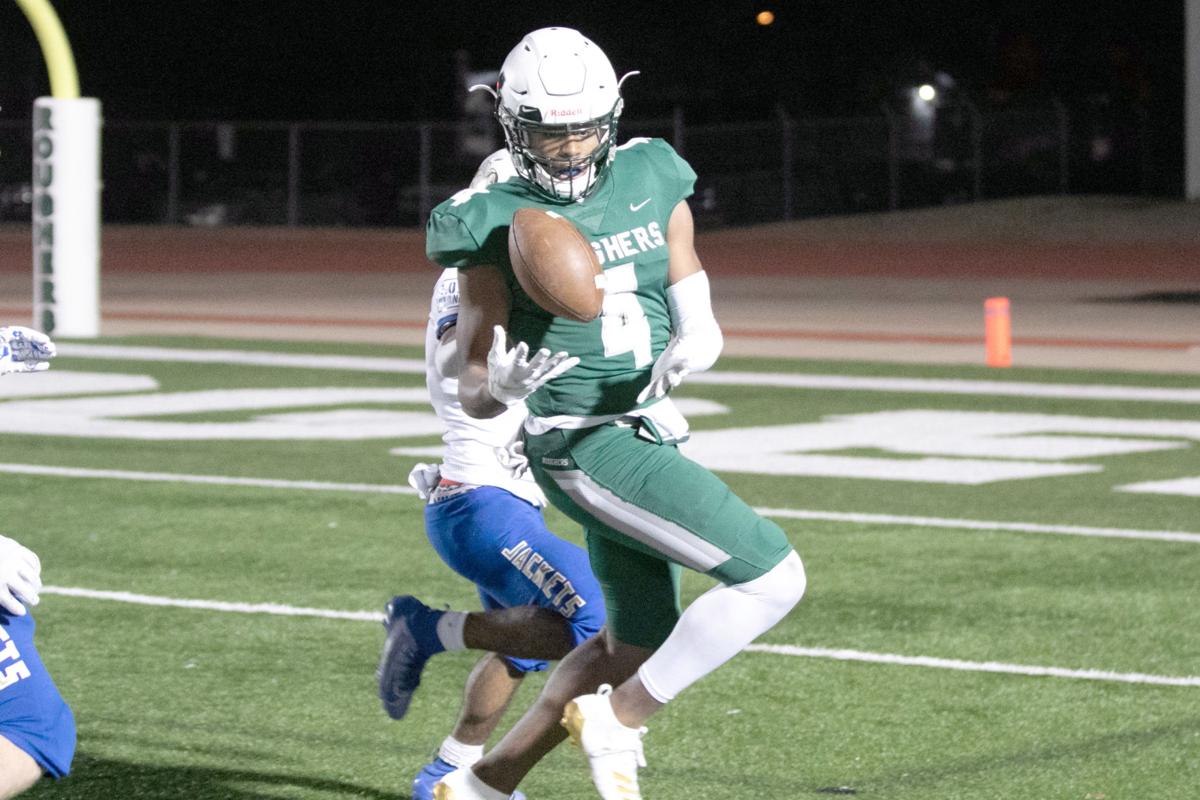 Muskogee’s Jordan Bradley juggles a pass in the third quarter for the Roughers’ loss on Friday.

Muskogee’s Kentrell Mitchum right, tries to get by a Choctaw defender during the Roughers’ 29-21 loss to the Yellowjackets in the first round of the Class 6A-II playoffs on Friday at Indian Bowl.

Muskogee’s Jordan Bradley juggles a pass in the third quarter for the Roughers’ loss on Friday.

A missing Jimmie Coleman in the second half.

Muskogee had quite a hole to dig out of, and came close.

But in the playoffs, close just means elimination and that was the Roughers’ fate, losing 29-21 to Choctaw in a third consecutive first-round exit.

On a drive in which Coleman scored twice — one nullified by a holding call, the other counting from seven yards out, and all starting after returning the kickoff 52 yards, he said he felt the sting in a hip pointer he’s played through for four weeks.

“It was good all week, but that third possession I was feeling it,” he said. “I tried to fight through it.”

At the half, Roughers coach Rafe Watkins knew a change was inevitable.

Coleman finished his career with an 88-yard night on 15 carries.

Yet down 29-6, they found a running game. Isaiah Givens scored on runs of 4 yards with 18 seconds left in the third and again with 9:24 to play on a 5-yard run. Give Jordan Bradley a major assist on the first score with his one handed pull-in for a first-and-goal inside the 5.

Brandon Tolbert, a freshman, added some punch with a couple of runs of 10-yards plus.

But this game was book-ended by missed opportunities.

Muskogee had two chances after Givens’ TD run made it a one-possession game. The first was a three-and-out that gave the ball back with 4:52 to go. The Muskogee defense held and gave the offense one more chance with 3:48 to play, but on a fourth-and-1 from its own 34, the call was pass instead of run. Quarterback Ty Williams chose to throw toward his right sideline to Kaunor Ashley, who was met for a loss of three.

“We had Kentrell (Mitchum) on the open side over here (on Muskogee’s side). No one on that. We didn’t execute it well,” said Roughers head coach Rafe Watkins. “Hindsight, I’d loved to have run the ball, but Kentrell was open and it was a first down.

“But that’s what happened the first quarter too. We didn’t execute. We played hard all night but we were very undisciplined, and in the end, that’s on us as coaches.”

A flea-flicker for 58 yards on the Yellowjackets’ third play put Choctaw on the board first, Chase Jackson doing the damage on the run. It was one of multiple examples of schemes that had Muskogee a few steps behind all night.

The Roughers then turned the ball over on one of two Williams interceptions. His toss for Mitchum was under thrown and into the hands of Jordan Mukes. Choctaw went 87 yards in 14 plays, Daysean Moore carrying the final four yards and the two-point conversion made it 14-0.

Muskogee would strike in three plays, thanks to Coleman’s last effective stand.

Choctaw answered quickly, taking three plays. Yellowjackets quarterback Thad Williams found Gabe Johnson behind Givens on a 75-yard touchdown, with 2:35 to go in the first quarter. After another two-point conversion, it was 22-6.

The second quarter was scoreless. Muskogee drove into Choctaw territory twice. The first time reached just across midfield before on a fourth and 9 from the Yellowjacket 33, Williams’ pass to Ashley was battled down at the 15 by Robert Ellis.

Williams’ second interception, intended for Bradley on a third-and-7 from their own 22 and essentially stripped in tight coverage by Angel Ackerman, led to Moore’s second TD and the 29-6 advantage with 7:41 left in the third.

The MHS junior signal-caller did get one pick back himself in the first half and finished the year with nine interceptions from the safety position that Tulsa and North Texas are offering him a spot at after one more season here.

Both teams walked away 8-3, Muskogee into the offseason and Choctaw — with its first playoff win since 1981 — on to face Stillwater in the semifinals.